HÀ NỘI — The Foreign Ministry and the United Nations in Việt Nam jointly held an international talk in Hà Nội on Thursday to discuss major global trends in the post-COVID-19 era, international experience and policy implications for Việt Nam.

Addressing the event, Foreign Minister Bùi Thanh Sơn noted that after 35 years of renewal, Việt Nam now has a great ambition of becoming a developed country with high income in 2045.

The official asked participants to identify global trends that may generate opportunities for Việt Nam to make development breakthroughs, while sharing international experience and lessons in optimising post-pandemic trends for economic recovery, and proposing suitable policies for Việt Nam.

UN Resident Coordinator in Việt Nam Kamal Malhotra mentioned rising concern about the three major crises to the globe which are climate change, loss of biodiversity, and pollution, which threaten the achievements and development prospects in the future.

The US-China geo-political tensions and the inequality in COVID-19 vaccine distribution may also harm multilateral cooperation, he said, expressing his impression at the fast movement to catch up with new and pioneering technologies, thus supporting the maintenance of essential services and economic activities.

According to Malhotra, the increasing inequality inside each country and among countries has become a big and worrying trend. Therefore, the reduction of inequality and the pursuing of green and resilient recovery policies are the highest targets of the UN.

He said he hopes the talk will help seek new ideas for the recovery process.

In the framework of the event, three discussion sessions were held on digital transformation, the transition of growth models towards inclusive, self-reliant and sustainable and green recovery orientations.

They also gave a number of policy recommendations to help Việt Nam tap opportunities from major global trends, thus combining outside resources with internal strengths to make breakthroughs towards realising the goals set at the 13th National Party Congress. — VNS 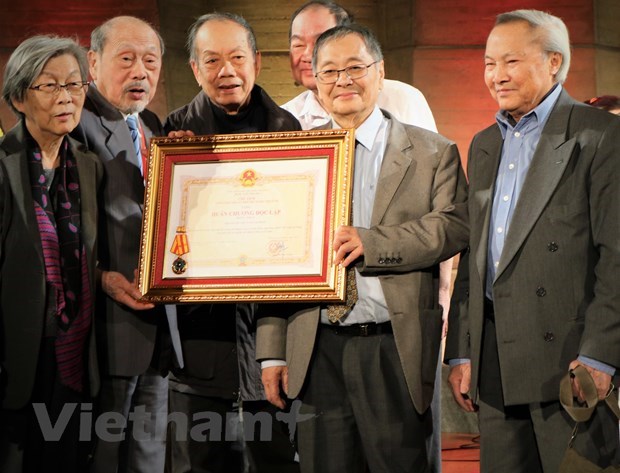 Former Vice President of the Association of Vietnamese in France ( UGVF ) Nguyen Thanh Tong (second, right) and representatives of the UGVF receive the Independence Order presented to the association for the second time.(Photo: VNA)

Hanoi (VNA) – Oversea Vietnamese ( OVs ) in France always believe in the leadership of the Communist Party of Vietnam ( CPV ), and hope the country will develop strongly, said former Vice President of the Association of Vietnamese in France (UGVF) Nguyen Thanh Tong.

In a recent interview with the Vietnam News Agency (VNA)’s correspondent in France, Tong highlighted the success of the 13th National Party Congress, saying that in the ‘gloomy sky’ of the global economy amid the COVID-19 pandemic, Vietnam has emerged as a remarkable and proud bright spot. He believed that the country will thrive further under the leadership of newly-elected leaders.

Meanwhile, Lydia Samarbakhsh, head of the Communist Party of France Central Committee’s Commission for External Relations, praised Vietnam’s successes in the fight against the COVID-19 pandemic, especially the implementation of urgent and drastic decisions to effectively respond to the health crisis.

Vietnam has been always transparent in giving pandemic-related information, she stressed, noting that this has helped the international community assess the pandemic situation, thus enabling governments to prepare their own plans to control the disease.

She also mentioned challenges facing Vietnam in coping with climate change, and in realising its goal to become a developed country with high income by 2045.

Giving comments on the Vietnam – France relationship, Samarbakhsh said France always wants to maintain its friendship and cooperation with Vietnam. The Communist Party of France will continue contributing to the development and consolidation of partnerships between France and other countries, including Vietnam, she added.

She believed that the French government has always considered Vietnam a friendly country. This has facilitated political and diplomatic exchanges between the two countries, as well as cooperative relations that the two sides will continue to promote together, especially cooperation between localities of the two countries.

Meanwhile, Olivier Corzani, Mayor of Fleury Merogis city in the Essonne region, held that Vietnam is currently at the time of the most dynamic development.

Corzani expressed his hope that the new Vietnamese leadership will continue to lead the country to greater development, and further promote France-Vietnam cooperative ties in various fields./.

VNA
Hanoi (VNA) – 2021 is considered an important time for the Association of Southeast Asian Nations (ASEAN) and Russia to review their achievements in cooperation and determine related goals in the time to come, towards further deepening the strategic partnership.

The two upgraded their relationship to the strategic partnership in November 2018.

At the 19th Meeting of the ASEAN-Russia Joint Cooperation Committee (ARJCC) held online, representatives from ASEAN member nations expressed their appreciation of the positive cooperation in bilateral relations.

Cooperation programmes and plans between ASEAN and Russia have contributed to supporting ASEAN in realising its goals in community building and narrowing the development gap.

The Russia n side stressed that ASEAN is one of the top priorities in its diplomatic policy. It supports the bloc in building the ASEAN Community and in strengthening its central role in the regional structure, and actively joins ASEAN-led mechanisms, thus contributing to peace, stability, and security in the region.

The two sides also highly valued the activities of the ASEAN Centre at the Moscow State Institute of International Relations (MGIMO), which contribute to promoting scientific cooperation between universities and research centres and promoting people-to-people exchanges between citizens of Russia and ASEAN.

In the context of COVID-19, the two sides also committed to promoting joint efforts to overcome the effects of the pandemic and stabilise their economies.

ASEAN and Russia agreed to further strengthen the strategic partnership, focusing on areas of mutual interest, such as politics, security, disaster management, technology and innovation, tourism, and the prevention of infectious diseases.

On the occasion of the 30th founding anniversary of diplomatic ties and 25 years of dialogue relations in 2021, ASEAN and Russia wish to further deepen the strategic partnership, thus helping both overcome difficulties posed by COVID-19 and recover economic development./. 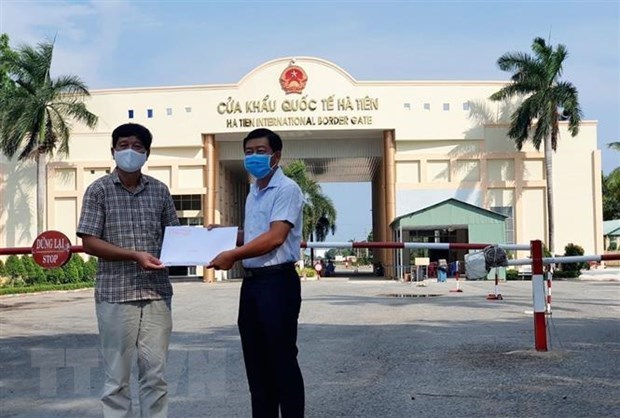 Phnom Penh (VNA) – Deputy Director of the Department for External Affairs of Kien Giang province Nguyen Viet Thong on April 15 handed over 300 million VND (13,000 USD) to representatives from the Vietnamese Consulate General in Cambodia’s Preah Sihanouk province as a gift of the southern province for poor Vietnamese Cambodians.

At the handover ceremony at Ha Tien International Border Gate, Thong spoke highly of efforts made by the Vietnamese Consulate General to support Vietnamese Cambodians in the region it is in charge, including Preah Sihanouk, Kampot, Kep, Koh Kong, Kampong Speu and Takeo provinces, especially amidst COVID-19 outbreaks in Cambodia.

He took the occasion to extend his best wishes to Vietnamese Cambodians in the southwestern region of Cambodia on the occasion of Chol Chnam Thmay, Cambodia’s New Year Festival.

Vietnamese Consul General Vu Ngoc Ly expressed his gratitude for the support of Kien Giang province as this was the third time the province have sent gifts to Vietnamese Cambodians in the region since the pandemic broke out in the province early last year.

On this occasion, President of the Khmer-Vietnamese Association in Kampot province Hoang Duc Ha received 60 million VND as a gift from the Vietnam Fatherland Front of Kien Giang province to Vietnamese Cambodians who are living in difficult circumstances in Kampot and Kep provinces./. 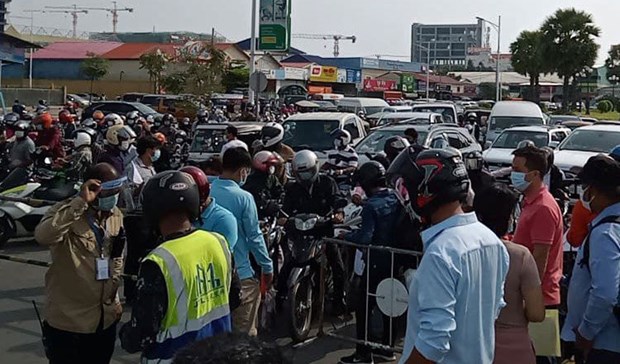 Hanoi (VNA) – Despite the widely publicised lockdown now in effect in Phnom Penh and Takhmao city of Cambodia, hundreds of cars and motorbikes are attempting to cross the closed Chroy Changva Bridge – also known as the Cambodia n-Japanese Friendship Bridge – on April 15 morning.

Many people have tried to cross the bridge, claiming to have reasons that allow them to travel during the lockdown.

Police and authorities are currently attempting to process traffic and verify their claims.

Phnom Penh has been placed under a lockdown for the first time since the emergence of COVID-19 cases in the country at the end of last year. During the two-week period, non-essential travel will also be restricted.
According to an official announcement of the Cambodian government, the lockdown, starting from April 15, aims to prevent the spread of the novel coronavirus in the community.

In Takeo province that borders Vietnam’s An Giang province, anyone who violates relevant regulations will be fined from 1-2 million riel (250-500 USD).

Meanwhile, residents in Svay Rieng province bordering Vietnam’s Tay Ninh province have been forced to wear face masks and put under social distancing following the detection of new community cases in the locality.

The Cambodian Ministry of Health announced that the country recorded 177 new COVID-19 infections and a fatality on April 14.

Meanwhile, seven districts in Kelantan, Malaysia will be placed under the movement control order (MCO) beginning April 16 after the number of COVID-19 cases in the state saw a spike.

The MCO will come into force on April 16 until April 29, per the advice of the Malaysian Health Ministry following its risk assessment, he said in a statement.

The ministry confirmed an increase of approximately 30.5 percent in infections in the past 14 days, from 756 to 1,088 cases per day, with all seven districts classified as red zones.

Ismail added that nine new clusters have also been reported in the past fortnight, with a high infectivity rate.

US Ambassador to Vietnam Daniel J. Kritenbrink believes that the most important values and products of the PCI are not the rankings of localities, but rather the sharing of the lessons learned, along with models and technology reforms.

The past 16 years has seen the PCI play an important role in promoting transparency and accountability in provincial economic governance domestically whilst facilitating private economic development as a means of promoting the nation’s competitiveness within the international arena.

Informal fees have continued to decline in recent years due to positive results achieved in the fight against corruption. In addition, both domestic and foreign investors are applying modern technologies as part of efforts to develop a greener, more stable economy, the diplomat states.

According to Ambassador Kritenbrink, the country has yielded several positive results due to improved administrative procedures, especially in terms of customs procedures. Vietnamese success in the fight against the novel coronavirus (COVID-19) pandemic has also had a positive impact on the local business climate in recent times.

Despite a high proportion of firms being negatively impacted by COVID-19 last year, Vietnamese businesses were largely able to continue their operations. Overall, the PCI underscores the success in the country’s economic development strategy based on FDI attraction and domestic private sector development.

Along with these remarkable results there remains a number of areas of major concern, such as corruption control, procedural systems, regulations, infrastructure, and quality public services.

Despite significant improvements occurring in these areas, last year saw only 27% of FDI enterprises rate the level of corruption in Vietnam as less common than in China, Thailand, Singapore, Indonesia, and Malaysia.

Furthermore, only 32% of FDI enterprises believe that the Vietnamese system of procedures, regulations, and infrastructure is better than that of these countries, while roughly 42% of them state that the quality of Vietnamese public service delivery is better.

These figures are largely in line with the judgment of the Korean Chamber of Business in Vietnam (KORCHAM), who say that infrastructure and regulatory systems are two areas in which the nation can further improve in to attract new investors moving forward.

Foreign financiers also expect that the country will continue controlling corruption, whilst simultaneously improving the quality of public service delivery, revamping procedures, and greatly upgrading the quality of infrastructure facilities.