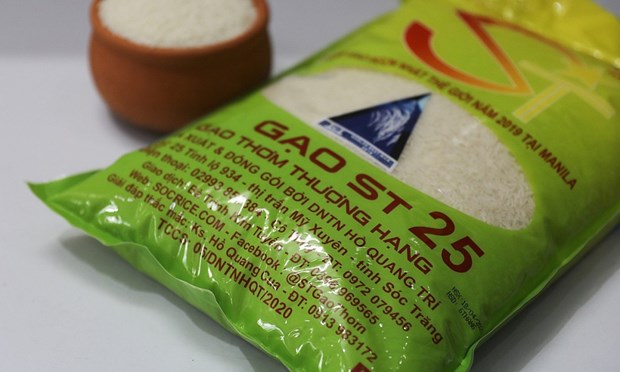 Sydney (VNA) – The Vietnam Trade Office in Australia has said it has taken measures to protect Vietnamese rice trademarks after an Australia n firm registered for trademark protection of rice varieties ST24 and ST25.

Both rice varieties ST24 and ST25 were developed in Vietnam by farmer-scientist Ho Quang Cua and his colleagues and have won international prizes.

The office has spoken with Cua about coordinating action and being actively engaged in discussions with leaders of T&L Global Foods Supply, which said it would check the matter with its brand unit.

The agency has also sent documents and photos to IP Australia to clarify that the ST24 and ST25 rice varieties were developed by Cua and a team of Vietnamese scientists, and have been granted patents in Vietnam.

It has asked IP Australia to consider the matter and to avoid possible disputes that could affect ST24 and ST25 rice exports from Vietnam to Australia.

Vietnam is also meeting with lawyers in Australia to prepare the necessary steps in line with IP Australia’s regulations, Hoa told the Vietnam News Agency (VNA).

He suggested Cua step up completing procedures to join in addressing the case and protecting the trademark.

Do Gia Thang, Director of Nguyen Do Lawyers in Australia, said it takes three to four months to carry out checks on a patent registration.

If an application meets all the requirements, the IP agency will issue a notice accepting the trademark and disclose the decision, he said, adding that the trademark, however, still has to wait for another year before the decision officially comes into force.

This is not the first time ST24 and ST25 rice have lost their trademark protection rights in foreign countries, as there were certain applications made to register ST25 in the US previously.

Vietnam exported rice worth 4.7 million USD to Australia in the first quarter of this year, a year-on-year increase of 66 percent./.