For many years, teachers from the delta area of Binh Dinh Province in Vietnam have called Canh Tien, a small village in Van Canh District, home.

Isolated in a forest, the village is only accessible via a 10-km road running through Nui Mot Lake.

Canh Tien Village has two schools – a kindergarten with 40 children and an elementary school with 51 students. All of them are Ba Na and Cham ethnicities.

Every Monday, teachers carry rice, salt, and other foods from home to Nui Mot Lake before rowing a boat to the village and staying there till Friday.

“At the time, there was no electricity, water or market. The cellular network was unstable,” she recalled.

“Now we have solar energy but there are still dangers to travel during the rainy season.

“It is hard to navigate while rowing a boat. Extremely scary!”

Despite all the difficulties, teachers take pride in their students.

“They compliment whenever we wear new clothes,” Uy said, recalling the kind acts of her students.

“Sometimes, they give us maize or veggies they garner from the forest.”

Tran Van Tho, principal of Canh Lien Elementary School, said they were happy when the village got solar energy in late 2020.

The school expects to build a dorm for teachers and school grounds in the near future.

Hanoi has planned four scenarios to ensure sufficient supply of goods for people in isolation areas.

Chairman of the Hanoi People’s Committee Nguyen Duc Chung on March 21 had a meeting with Hanoi Department of industry and Trade and local businesses to discuss supply of essential goods in the city amid the Covid-19 outbreak.

At the meeting, the Department of Industry and Trade presented a plan to supply basic necessities for mass isolation areas and the possibility of bringing supplies from other provinces and cities.

According to the department, local suppliers and manufacturers are requested not to allow scarcity in their distribution systems. Big retailing groups such as Central Retail ( which runs Big C and Lan Chi supermarket chains), BRG Group (which runs Hapro, Intimex, Seika marts), and Duc Thanh mart chains have increased by 300-500% their stock of essential goods and foodstuffs.

Deputy Director of the Department of Industry and Trade Tran Thi Phuong Lan said that the department has worked out four scenarios for preparing goods supply.

The first scenario is to supply goods for 200 residents in isolation in a district and 2,350 residents under home quarantine. Goods trade is still as usual.

The second one is for one thousand people in five mass isolation areas in a district and over 12 thousand residents in home quarantine. The demand for goods will increase but there will be no major changes in the market.

The third one is for more than 20 infected cases in the city and two thousand people in 10 mass isolation areas and nearly 130 thousand residents in home isolation.

According to the department, under this scenario, there might be a local shortage of goods due to the increasing number of people purchasing goods at a time. To ensure supply, the department will constantly regulate the distribution system in the city.

The fourth one is for one thousand infected cases in the city, each district has one to five quarters under lockdown with a total population of three thousand and more than 380 thousand residents in home isolation.

In this scenario, some commercial centers, supermarkets, convenience stores and wet markets in the quarters under lockdown could have to temporarily be closed. For the possible surge in demand, in addition to the amount of stored goods, the department will bring goods from other provinces and cities.

“Stored goods are enough for supply in Hanoi for 2-3 months,” Lan from the department said. 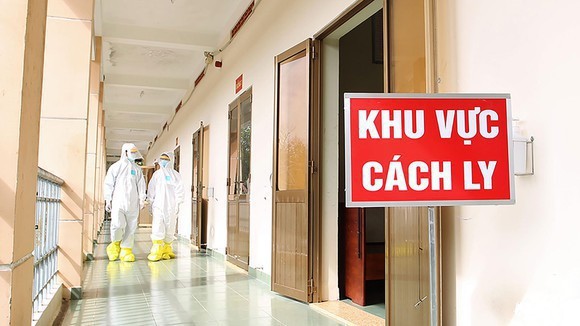 Additionally, the local health sector also made a list of all the people who had close contact with the immigrants, disinfected Dao Tien guesthouse in Quarter 2, Tan Tien Ward, Bien Hoa City.

While waiting for the test results, the local authorities will control the guesthouse and perform restrictions on going in and out the hostel.

Earlier, the functional forces of Tan Tien Ward received information about 12 Chinese immigrants without any documents at Dao Tien guesthouse.

Through the working process, these people cannot present documents as required.

Among the quarantined Chinese workers for health supervision, 248 have entered Vietnam within the time window of 14 days.

Vietnam is isolating 5,110 Chinese laborers as of February 13 among 7,600 who returned from their country after the Lunar New Year holiday to monitor their health, VnExpress reported.

Among the Chinese laborers in quarantine, 248 have entered Vietnam within the time window of 14 days, according to a report of the Ministry of Labor, War Invalids and Social Affairs.

The report adds that Vietnam has licensed 33,770 Chinese laborers, of whome more than 15,000 are working in the country. Half of these people (more than 7,600) left Vietnam for their home country for Lunar New Year celebrations and then came back.

Earlier, on February 2, the Ministry of Labor, War Invalids and Social Affairs instructed businesses and employers to stop accepting Chinese workers returning to Vietnam as well as other foreign workers traveling through epidemic-hit areas.

In case of re-admission, enterprises must report the list of laborers returning from China and apply isolation at their residences and working places under the health sector’s guidance. Besides, they need to undergo medical supervision for 14 days from their date of entry into Vietnam.

As of February 14, Vietnam has reported 16 cases of nCoV infection, of them seven have recovered and been discharged from hospital.

The number of Covid-19 infections today reached 64,438 globally while the death toll has risen to 1,383, including three outside China.

Hanoi’s health sector coordinated with the city police to isolate 28 people returning from China at the Police Hospital.

Hanoi has not recorded anyone infected with nCoV and isolated 716 people to monitor their health as of February 13, VnExpress reported.

A representative of the Hanoi Department of Health said that 58 people suspected of nCoV infection have been watched at hospitals, of them, seven returned from the Chinese city of Wuhan, the epicenter of the epidemic outbreak.

Besides, 47 cases are returnees from other parts of China and four people are working at Noi Bai International Airport.

So far, 55 people who have tested negative with nCoV have been discharged from hospital. Three others waiting for test results are being quarantined.

Meanwhile, 326 people who made contact with the infected people have been required to stay in quarantine at home. Currently, 296 people have finished their medical supervision and have been released, 30 others have been asked to be kept under close watch.

Hanoi’s health sector coordinated with the local police to isolate 28 people returning from China at the Police Hospital. None of them traveled across the Chinese province of Hubei.

Up to 1,601 cases traveling from or through epidemic-hit areas have undergone medical supervision. Currently, 946 people have been released, 655 others continue to be isolated for health monitoring.

According to the municipal Department of Health, up to now, Hanoi has not recorded any cases positive with nCoV, but there is still a risk of infection from people returning from the epidemic-stricken areas, including the possibility of an outbreak citywide.

As of February 13, Vietnam has reported 16 cases of nCoV infection, of them, seven have recovered and been discharged from hospital.

Secretary of the Hanoi Party Committee Vuong Dinh Hue and Chairman of the municipal People’s Committee Nguyen Duc Chung on February 27 visited doctors and checked the Covid-19 anti-epidemic work at Duc Giang General Hospital on the outskirts of the city, Zing.vn reported.

The municipal Party chief checked the hospital’s examination and screening areas for patients who are suspected of contracting the new coronavirus.

Appreciating the hospital in preventing the Covid-19 epidemic, Hue noted that the disease evolution remains complicated and unpredictable. Therefore, the hospital’s doctors and staff must uphold guard about the epidemic, be ready to deal with the worst scenario and make effort to contain the epidemic.