At the Indie Fest in the U.S., which promotes independent filmmakers and unique voices, the movie won the Award of Excellence for its art direction, and the Award of Merit (Asian Film Feature).

In the movie, directed by Chinese director Guo Xiang, Phuong plays Nguyen Thi Hoa, a nurse trying to find love but beset hit by tragedy as she falls in love with American doctor James Marquis (Kazy Tauginas) in the 1930’s French Indochina.

The film is a collaboration of filmmakers in Vietnam, China, and the U.S., with Chair of the Broadcast Journalism department at New York Film Academy, Bill Einreinhofer as executive producer, and a budget of around $500,000, according to IMDb, an online database of information related to films and television programs.

“The subtext of the film is the nature of colonialism, and the corrosive effect it has on both the colonizers as well as those colonized,” Einreinhofer explained.

Vi Kien Thanh, head of the Cinema Department under the Ministry of Culture, Sports and Tourism, said that “Tinh Yeu Vo Hinh” has been licensed for screening in Vietnam. Producers have said the move will hit domestic giant screens this year. 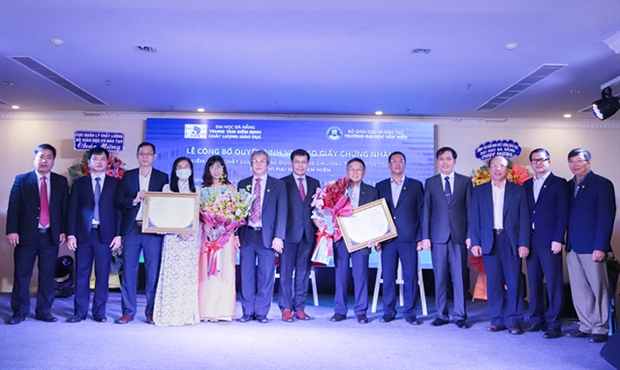 Van Hien University’s IT and hotel management majors in HCM City are awarded quality accreditation certificates by the Quality Management Department and Centre for Education Quality Accreditation at Da Nang University on April 5. (Photo courtesy of the university)

The universities have set up educational quality assurance committees that offer teachers’ guidance in training methodology and assessment to meet criteria in quality accreditation.

According to Dr Dinh Thanh Viet, head of the educational quality assurance committee at Da Nang University, it is difficult for university lecturers to change, but when they recognise the importance and the benefits for students to receive quality accreditation, they are ready to do.

Rector of Ho Chi Minh City University of Education Huynh Van Son said that in 2018 the university started a project on quality assurance and governance, which has improved management and training under the sponsorship of the Agence Universitaire de La Francophonie (AUF), a society of universities offering training in French.

“The project has improved the awareness of university’s lecturers and managers about quality assurance in training programmes and higher education governance,” Son said.

The staff learned from experts from other universities in the country, he added.

As part of the project, the university developed a plan to improve the professional capacity of lecturers. The university held training courses, including ones on establishing and operating a quality assurance system .

Dr Tu Minh Thien, rector of Van Hien University in HCM City, said the university was accredited according to the Ministry of Education and Training’s new set of quality criteria in March last year.

On April 5, Van Hien University’s IT and hotel management majors in HCM City were awarded a quality accreditation certificate from the Quality Management Department and Centre for Education Quality Accreditation Centre at Đà Nẵng University.

These majors met the ministry’s 50 quality criteria. Each year they attract nearly 200-300 students each. Around 90 percent of their graduates receive jobs in IT and hotel management.

Thien said the university would continue registering accreditation for undergraduate and postgraduate majors such as English language, business administration and others, according to domestic and international standards.

Dr Le My Phong, deputy head of the Quality Management Department under the Ministry of Education and Training, said that quality accreditation was very important for universities to affirm their training quality and consolidate their position in the country’s higher education system.

According to the ministry, 150 universities and 342 training programmes nationwide are accredited by domestic centres.

Many universities such as member universities of Vietnam National University – Hanoi and HCM City, and Ton Duc Thang University in HCM City, have been accredited by the ASEAN University Network and accreditation organisations in France and other countries./.