The IIP in the first four months of 2021 enjoyed a year-on-year increase of 10 percent, boosted by the growth of manufacturing and processing (12.7 percent), electricity production and supply (6.6 percent), and water supply and waste and wastewater treatment (7.5 percent). 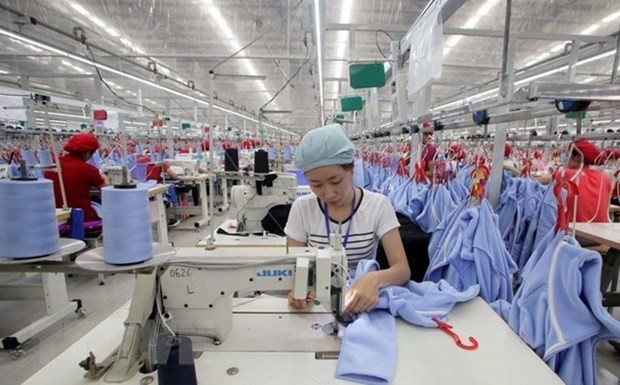 On the contrary, the mining sector posted a decrease of 5.7 percent against the same period last year.

The number of labourers working in industries as of April 1 rose by 1.5 percent month-on-month, and 1.8 percent year-on-year.

Sectors are advised to focus on supporting the development of the domestic markets, studying consumption stimulus policies for locally-made products, and developing supporting industries. 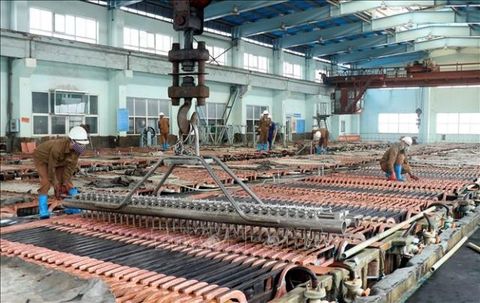 Viet Nam’s index of industrial production (IIP) in April rose by 24.1 per cent year-on-year, driven by the positive impact of free trade agreements (FTA), according to the General Statistics Office.

The IIP in the first four months of 2021 enjoyed a year-on-year increase of 10 per cent, boosted by the growth of manufacturing and processing (12.7 per cent), electricity production and supply (6.6 per cent), and water supply and waste and wastewater treatment (7.5 per cent).

On the contrary, the mining sector posted a decrease of 5.7 per cent against the same period last year.

The number of labourers working in industries as of April 1 rose by 1.5 per cent month-on-month, and 1.8 per cent year-on-year.

Sectors are advised to focus on supporting the development of the domestic markets, studying consumption stimulus policies for locally-made products, and developing supporting industries. — VNS

Total new orders increased for the eighth month running, and at the fastest pace in close to two-and-a-half years.

The Vietnam Manufacturing Purchasing Managers’ Index (PMI) rose for the third month running, posting 54.7 in April following a reading of 53.6 in March and was the strongest since November 2018, according to Nikkei and IHS Markit.

“Output and new orders each rose to the greatest extent since late-2018, and there were encouraging reports that customers were often happy to place larger orders amid greater confidence in the sustainability of the current expansion,” said Andrew Harker, associate director at IHS Markit, which compiles the survey.

“Inflationary pressures remained elevated, with output prices increasing at the fastest pace for almost a decade. There were some signs, however, that the severity of the difficulties in supply chains may be easing, which will hopefully reduce some of the upward pressure on prices,” he noted.

The industrial sector was boosted in April by signs that customers were willing to commit to larger orders than previously, given general improvements in demand and control over the Covid-19 pandemic. Total new orders increased for the eighth month running, and at the fastest pace in close to two-and-a-half years.

Higher new orders fed through to a similarly-sized expansion of manufacturing output, with production also up at the fastest pace since November 2018. Consumer goods firms posted the sharpest rise in output of the three broad categories covered.

Firms were aided in their efforts to boost production by increasing workforce numbers. Staffing levels were expanded for the third month running, and to the greatest extent since December 2018. This increased capacity, however, was not sufficient to prevent a first rise in backlogs of work in 15 months due to the strength of new order growth.

As well as raising staffing levels, firms also posted a sharp and accelerated expansion of purchasing activity. Respondents indicated that the increase in input buying was both in response to higher new orders and as part of efforts to build reserves to support production growth in the months ahead.

Efforts to expand inventory holdings were generally successful in April, with both stocks of purchases and finished goods increasing. In both cases, the rate of accumulation was solid and faster than at the end of the first quarter.

There were some signs that recent severe disruption to supply chains eased in April. While suppliers’ delivery times continued to lengthen, the latest deterioration in vendor performance was modest and the softest since last September. Where lead times did lengthen, there were ongoing reports of raw material shortages and global shipping difficulties.

Supply shortages and rising shipping costs continued to feed through to higher input prices. The rate of cost inflation remained substantial and was only slightly slower than that seen in March. In turn, firms raised their selling prices sharply, with the rate of inflation quickening to the fastest for close to a decade.

Expectations that the Covid-19 pandemic will remain under control leading to higher demand, and the introduction of new product lines, supported ongoing confidence among firms regarding the 12-month outlook for production.

Hanoi is set to draft substantial supporting policies specialized for local enterprises manufacturing the city’s key industrial products, with a view to turning them into the main driving force for growth.

“Identifying and developing key industrial products are essential steps to boost growth in industrial sector in a sustainable way and ensure the realization of Hanoi’s targets to complete the industrialization process by 2025,” stressed Vice Chairman of the Hanoi People’s Committee Nguyen Manh Quyen.

To realize these targets, Hanoi aims to gear up trade and investment promotion activities by holding international trade fairs as a way to connect local and foreign partners, in turn taking Vietnamese products into the global supply chain.

For long-term solutions, local authorities would continue to improve business and investment environment by simplifying administrative procedures in fields of construction, customs, taxes and investment.

Hanoi also identifies the necessity to accelerate the construction progress of hi-tech and industrial clusters to create room for modernizing its industrial sector and eventually boosting economic competitiveness.

Vice Director of the municipal Industry and Trade Department Dam Tien Thang noted the local authorities would seek feedback from the business community to draft supporting policies accordingly, especially as the pandemic continues to exert negative impacts on enterprises’ operation.

“Enterprises should further take advantage of Vietnam’s existing trade agreements, including the CPTPP and EVFTA, to grasp opportunities for recovery and growth,” Thang said.

In the past three years, Hanoi recognized 117 products from 77 enterprises as the city’s key industrial products.

Last year, revenue from these 77 firms stood at nearly VND200 trillion (US$8.63 billion), along with export revenue of US$2 billion.

The majority of enterprises whose products classified as Hanoi’s key industrial items are of large size, high competitiveness and capable of integrating into global supply chains, with names such as Canon Vietnam, TOTO, or Meiko Vietnam.

All are operating in priority industrial sectors such as production of new materials, IT, molding and precision engineering, among others, which are expected to have high spillover effects and contribute significantly to Hanoi’s economic development.

A positive growth rate of Hanoi’s industrial production in May led to an expansion of 2.6% year-on-year in the January – May period.

Hanoi’s effective containment of the Covid-19 pandemic  has helped the city’s Index of Industrial Production (IIP) in May grow 12.3% month-on-month and 1.5% year-on-year, a stark contrast from a contraction of 14.7% recorded in April, according to the Hanoi Statistics Office.

A rebound of industrial production in May led to an expansion of 2.6% year-on-year of the IIP in the January – May period.

However, the complicated progression of the pandemic globally continues to put pressure on the industry sector, said the municipal Statistics Office in its monthly report.

Specifically, the mining industry’s output decreased 14.4% year-on-year between January and May, while the manufacturing and processing industry expanded at a modest rate of 2.3%.

Production and distribution of electricity rose 5.9% year-on-year; and water supply, sewage treatment and water collection was up 5.5%.

Meanwhile, other subsectors increased sharply due to growing demand during the pandemic, including medicine and drugs (up 41.7% year-on-year); furniture production (22.9%); computers and electronic products (22.5%), among others.

According to the report, the employment rate at industrial companies declined by 2% year-on-year, in which the rate at state sector was down by 5.8%; that of the private sector contracted 0.9%, and that of the foreign-invested sector dipped 1.7%.

Notably, foreign direct investment (FDI) commitments to Hanoi in the year to May 19 increased 6.1% against the previous month to US$1.04 billion.

Since the beginning of May, Hanoi started promoting domestic tourism with the reopening of cultural and tourist attraction spots, albeit at a limited scale.

In the first five months, the number of foreign tourists coming to Hanoi declined 64.8% year-on-year to 684,000 during the period, while that of domestic tourists fell 65.8% to 1.7 million.

As the city is now stepping up efforts towards economic recovery, the majority of businesses and service activities have reopened, except for bars or karaoke parlors.

However, the pandemic’s negative impacts on the economy remain severe, which has significantly affected the people’s income, and subsequently consumer spending.

Total retail sales of consumer goods and services in Hanoi in the five-month period are estimated at VND212.8 trillion (US$9.11 billion), down 4.4% year-on-year.

Notably, revenue from catering and hospitality services suffered a decline of 36% year-on-year in revenue to VND16.1 trillion (US$689.94 million).

Over the first four months, the Index of Industrial Production (IIP) increased by 10 per cent compared to the same period last year. The country’s successful control of the COVID-19 pandemic, as well as effective free trade agreements (FTAs) are the main reasons behind this rise, resulting in the vibrant recovery of business and manufacturing activities.

Compared to last month, the IIP of the mining industry increased 3.8 per cent; processing and manufacturing increased 0.5 per cent; electricity production and distribution increased 2.6 per cent; water supply, waste, and wastewater management and treatment rose 4.4 per cent.

Data from the General Statistics Office showed that the processing and manufacturing industry increased by 12.7 per cent (the figure was 9.7 per cent in the same period last year), contributing 10.2 percentage points to the general increase.

Meanwhile, the IIP of power generation, transmission, and distribution increased by 6.6 per cent (6.5 per cent in the same period last year), contributing 0.6 percentage points.

Industrial production maintained its high growth momentum, as of April 1, the number of employees working at industrial enterprises increasing by 1.5 per cent over the last month and by 1.8 per cent over the same period last year.

KB Securities Vietnam JSC (KBSV) stated that the Vietnamese economy in the first quarter continued to show signs of recovery, especially in the industrial and construction sectors (up 6.3 per cent on-year). The manufacturing and processing industry continues to drive GDP growth.

Notably, processing and manufacturing increased by 9.5 per cent on-year, mainly due to the booming export activities of foreign enterprises.

Export growth remained strong at foreign-invested enterprises since these firms, after relocating production to Vietnam, took advantage of the supply chain and recovery of the global economy.