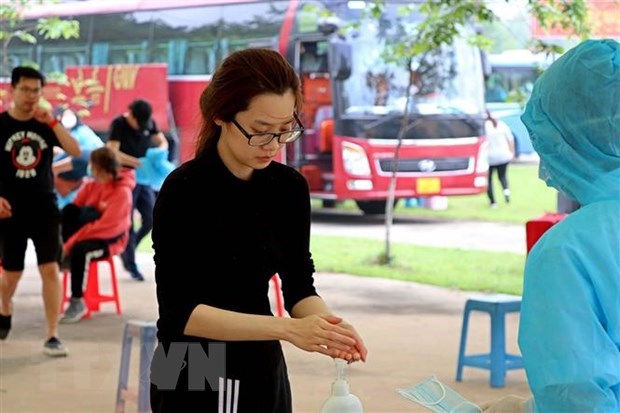 The national total added to 2,758, including 1,570 domestically-transmitted cases.

The number of recovered patients now stands at 2,445 and the death toll remains at 35.

A total 38,743 people who had close contact with COVID-19 patients or arrived from pandemic-hit areas are being quarantined across the country, with 517 at hospitals, 22,945 at concentrated facilities and 15,281 at home or accommodations./.

All the new cases were immediately put in quarantine right upon entry. They are now receiving COVID-19 treatment at local hospitals after their test results were confirmed positive for the SASR-CoV-2 virus.

Of the total number of patients, 1,570 are local infections and 1,202 are imported cases.

The same day, an additional 30 coronavirus patients were declared free from the virus, boosting the total recoveries in the nation to 2,475.

Among the country’s active patients, a total of 45 have since tested negative for the virus at least once, with many testing negative multiple times.

Over 40,390 people who came into close contact with COVID-19 patients or who arrived from pandemic-hit areas are currently in quarantine and must undergo medical monitoring across the country.

The Ministry of Health has also requested that provinces and cities organize their COVID-19 vaccination supplies from the COVAX Facility before May 5.

At present, the Ministry of Health has so far distributed 811,200 doses of the COVAX vaccine to localities in accordance with the Government Resolution 21 regarding the purchase and use of COVID-19 vaccines.

Among them, six were reported in Khanh Hoa Province. Two of them arrived home from Japan on Flight VJ8837, which landed at Cam Ranh International Airport on April 13 and were immediately quarantined in the province.

The other four patients flew back to Vietnam from Russia through Cam Ranh International Airport on April 13.

The six tested positive for Covid-19 on April 15 and are being treated at the Khanh Hoa Hospital of Tropical Diseases.

Another patient was recorded in Danang. He arrived at the Danang International Airport from Japan on April 7. He was also found to be diagnosed with Covid-19 on April 15 and is receiving medical treatment at the Danang Lung Hospital.

Two other cases in Nghe An are all men who returned to Vietnam from Japan through Vinh Airport. They tested positive for Covid-19 today and are being treated at a general hospital of the northwestern area of Nghe An.

Four other cases in HCMC include three men and a woman. They flew home from the United Arab Emirates through the Tan Son Nhat International Airport on April 14 and tested positive for Covid-19 on April 15. They are under medical treatment at the Cu Chi Field Hospital.

The remaining case was reported in Quang Nam. She entered Vietnam from Japan through the Danang International Airport and was sent to a centralized quarantine center in Quang Nam.

She is being treated at the Quang Nam Central General Hospital.

14 Vietnamese people who recently returned from abroad have tested positive for SARS-CoV-2, raising the total number of patients in the country to 2,772, the Ministry of Health reported on Friday evening. According to the ministry’s report, the newly-reported patients include eight men and six women aged between 21-69 who recently returned to Khanh Hoa, Nghe An, and Quang Nam provinces, and Danang and Ho Chi Minh cities from Japan, the UAE, and Russia.

They were all sent to local quarantine sites upon arrival and are now being treated at local hospitals.


With these new infection cases, the number of Covid-19 patients in Vietnam has increased to 2,772, including 910 locally-transmitted cases reported since the new outbreak started in Hai Duong on January 28.

As of 6 pm on April 16, a total of 2,475 Covid-19 patients had recovered and been discharged from hospital. There have been 35 deaths, most of them being the elderly with serious underlying diseases.

The new patients brought the national count to 2,772.

On the same day, 30 patients were given the all-clear, bringing the number of recoveries in Vietnam to 2,475. The death toll remained at 35.

Of those still under treatment at medical facilities, 11 have tested negative for the novel coronavirus SARS-CoV-2 once, 16 twice and 18 thrice.

A total 40,398 people who had close contact with COVID-19 patients or arrived from pandemic-hit areas are being quarantined across the country, with 524 at hospitals, 24,612 at concentrated facilities and 15,262 at home or accommodations.

Health Minister Nguyen Thanh Long issued a warning during the course of a virtual conference held on April 16 with representatives from 63 localities throughout the nation.

He noted that border areas located in the southwestern region can be considered potential hot spots, with the Ministry of Health’s working delegation keeping a close watch on relevant areas.

Minister Long also suggested that local authorities should move to tighten control of border gates, open crossings, and trails, while also ensuring that entrants go through a strict quarantine period. Without these measures, it can be viewed as likely that the epidemic will break out once more, he added.

Furthermore, the Health Minister urged all localities, especially provinces which share a border with Cambodia, to be vigilant and manage illegal entry and exit activities whilst deploying other measures to fight against the spread of the COVID-19 pandemic.

The Ministry of Health has also requested localities outline scenarios on large-scale testing, isolation, and treatment for immediate activation if an outbreak recurs.

According to the World Health Organization (WHO), many countries worldwide have started to record an increase in the number of positive COVID-19 cases following measures being loosened. On average the world recognises between 600,000 and 700,000 new cases daily, in addition to between 1,000 and 2,000 deaths.

Vietnam has currently experienced 21 days without any new locally-transmitted cases, with the country continuing to detect more imported cases.

According to Dang Quang Tan, head of the Health Ministry’s Preventive Medicine Department, the entire nation must remain highly vigilant against the possible recurrence of the SARS-CoV-2 virus.