The COVID-19 crisis is pushing poor countries and the poor in general deeper into difficulty. At the recent G20’s Finance Ministers and Central Bank Governors meeting, representatives from Mexico and Argentina said that middle-income countries are being forgotten, even though this group accounts for 75% of the world’s population, while 62% of the citizens of these are living in poverty. Meanwhile, the conference quoted the World Bank (WB) estimate pointing out that the COVID-19 pandemic has created an additional 120 million extremely poor people globally, mostly in middle-income countries.

In this context, Mexico and Argentina have called on international creditors to reschedule debts owed by middle-income countries, while at the same time putting them in the designated group to benefit from the International Monetary Fund (IMF)’s US$650 billion special assistance scheme. The two G20 members also proposed the creation of an international fund to support debt restructuring for middle-income countries, helping prevent health and financial crises from turning into debt crises in the medium term.

The above proposals have been made in the context of the “COVID-19 storm” severely devastating the economies of poor and developing countries. However, statistics show that so far, only 46 (out of 73 eligible countries) have requested and got approval for a postponement regarding the repayment of debts totalling about US$5.7 billion.

To support poor countries in escaping the post-pandemic economic crisis, the G20 Finance Ministers and Central Bank Governors agreed to delay the repayment of public debt interest from the poorest countries. At the same time, the “G20 family” also supported the IMF’s plan to raise reserves to help poor countries and pledged to reach agreement on global tax reform by mid-2021.

Besides the request for assistance to poor countries designed to rejuvenate their economies, international financial institutions such as the IMF and WB are focusing on supporting poor and developing countries so they do not give up on the fight against climate change.

At the spring meetings of the WB and IMF last week, the two proposed the idea of a “debt swap” for green projects. Accordingly, the IMF’s managing director said that low-income countries are facing a double crisis – under pressure to repay debts and facing environmental problems, making them highly vulnerable. So by easing the debt burden of governments, financial institutions and creditors can help provide poor countries with a chance to invest in green projects for recovery. This will be an important factor bringing the world into a more sustainable development period post-COVID-19.

It is expected that details on the so-called “green debt swaps” will be announced at the 26th session of the Conference of the Parties (COP 26) at the United Nations Framework Convention on Climate Change, scheduled for the end of 2021 in the UK. Increasing spending in order to boost the world economy and help poor countries rejuvenate their economies, fight climate change, and ensure “no one is left behind” was also the message emphasised by the US Treasury Secretary at the recent spring meetings of the WB and IMF.

The world is experiencing the COVID-19 crisis, but thanks to active anti-epidemic campaigns and vaccines, the health of the global economy is recovering. In the newly released World Economic Outlook Update, the IMF raised its forecast for world economic growth this year to 6%, instead of 5.5% in January. However, the big problem now is an uneven recovery amongst countries.

This requires the international community, especially rich countries and major financial institutions, to make efforts to implement the “post-COVID-19 dual goals” – both to help poor countries in their economic recovery, while ensuring they join hands in the fight against climate change. 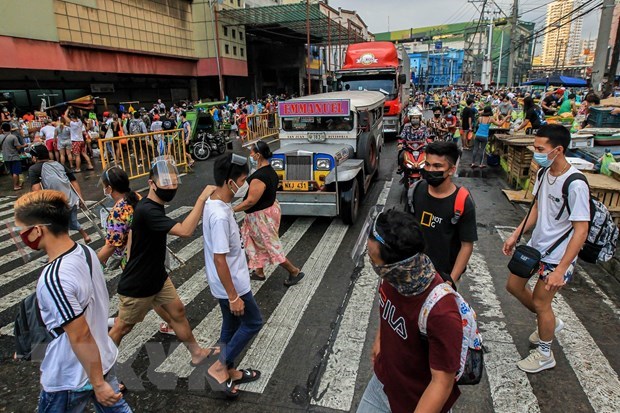 People with face masks on to avoid COVID-19 infection in Manila, the Philippines , on March 20, 2021 (Photo: Xinhua/VNA)

BSP said the FDI increase reflects investors’ optimism at the start of the year driven by the gradual reopening of the economy under the “new normal” condition, the easing of lockdown measures, and positive news about the rollout of COVID-19 vaccines.

Due to the COVID-19 pandemic’s impact, the Philippine economy contracted 9.5 percent in 2020.

In its recently released World Economic Outlook, the International Monetary Fund (IMF) forecast this archipelago nation will grow by 6.9 percent this year and 6.5 percent in 2022./.