IFC wants to provide large financial packages in both mid- and long-term for Hanoi in waste treatment, transportation and smart lighting.

Secretary of the Hanoi Party Committee Vuong Dinh Hue gave his remarks in a meeting with IFC Regional Manager for Vietnam, Cambodia, and Laos Kyle Kelhofer on January 12.

“Hanoi is in the process of evaluating the 10-year implementation of the Law on the Capital City, which stipulates some modifications to the city’s special finance-budget mechanism,” noted Mr. Hue.

The Hanoi Party chief lauded IFC’s initiatives and activities in Vietnam in general, and in Hanoi in particular, with the highlight being the signing of a memorandum of understanding at the “Hanoi 2020 – Investment and Development Cooperation” last June.

“Thanks to the event, Hanoi was able to maintain a positive economic growth of 3.98% in 2020, 1.4 times higher than the national average,” he said, adding that the city’s state budget revenue was 6% higher than figure recorded in 2019, an all-time high figure.

IFC Regional Manager Kyle Kelhofer stressed Hanoi’s drastic efforts against the Covid-19 pandemic have helped create a safe environment for the people, including foreigners living in the city.

According to Mr. Kelhofer, total outstanding loans of IFC make up one-third of the total of the World Bank.

Mr. Kelhofer stressed the stability of Vietnam’s economic development over the past 25 years was a key factor for the IFC to continue providing support for the country in various fields, which makes Vietnam as IFC’s top 10 partners, and is on track to move to top 5.

The IFC Manager expected further cooperation with Hanoi to boost the development of the city and private sector, in which IFC will provide major financial support in both mid- and long-term for Hanoi in waste treatment, transportation and smart lighting.

IFC commits to joining Hanoi in the search for the best financing mechanism that suits the capital city’s vision for development.

Hanoi is expected to cooperate with the International Finance Corporation (IFC), a member of the World Bank Group, to work out a pilot finance mechanism to fund urban development projects.

Chairman of the Hanoi People’s Committee Chu Ngoc Anh gave the remarks in a meeting with IFC Regional Manager for Vietnam, Cambodia, and Laos Kyle Kelhofer today [March 26], aiming to realize the Memorandum of Understanding (MoU) signed between the two sides in 2020.

Referring to IFC’s suggestion of the necessity to have a next-generation strategy to attract FDI, Anh said Hanoi is set to hold a conference to discuss measures promoting foreign investment capital to the city.

On his part, Kelhofer noted that the IFC is one of the largest global development institutions running projects worth around US$25 billion for developing countries.

Kelhofer said in 2020, the organization invested US$1 billion in Vietnam, making the country to be the IFC’s top 10 partners, and on track to join in the top 5.

The IFC’s representative mentioned two initiatives that Vietnam could diversify its financing sources for urban development, including the issuance of green bond and through the APEX clean energy access fund.

IFC is committed to joining Hanoi in the search for the best financing mechanism that suit the capital city’s vision for development. 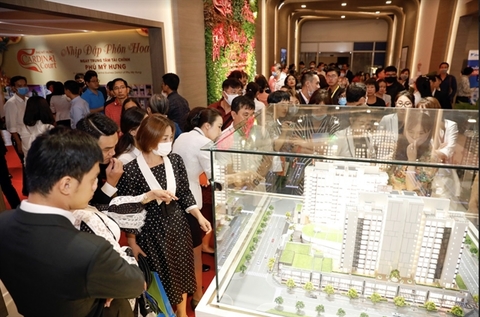 Phu My Hung Development Corporation has unveiled a new housing project, Cardinal Court, that is the first in the Phu My Hung City Centre’s Southside District to receive the International Finance Corporation’s EDGE certificate for sustainability.

Units are likely to be sold from the second quarter of this year, and a show houses has been built at the Phu My Hung Sales Gallery Centre in District 7.

It requires a building to achieve a minimum reduction of 20 per cent in energy and water use.

Cardinal Court claims to have achieved energy reduction is 28 per cent and water reduction of 39 per cent. — VNS