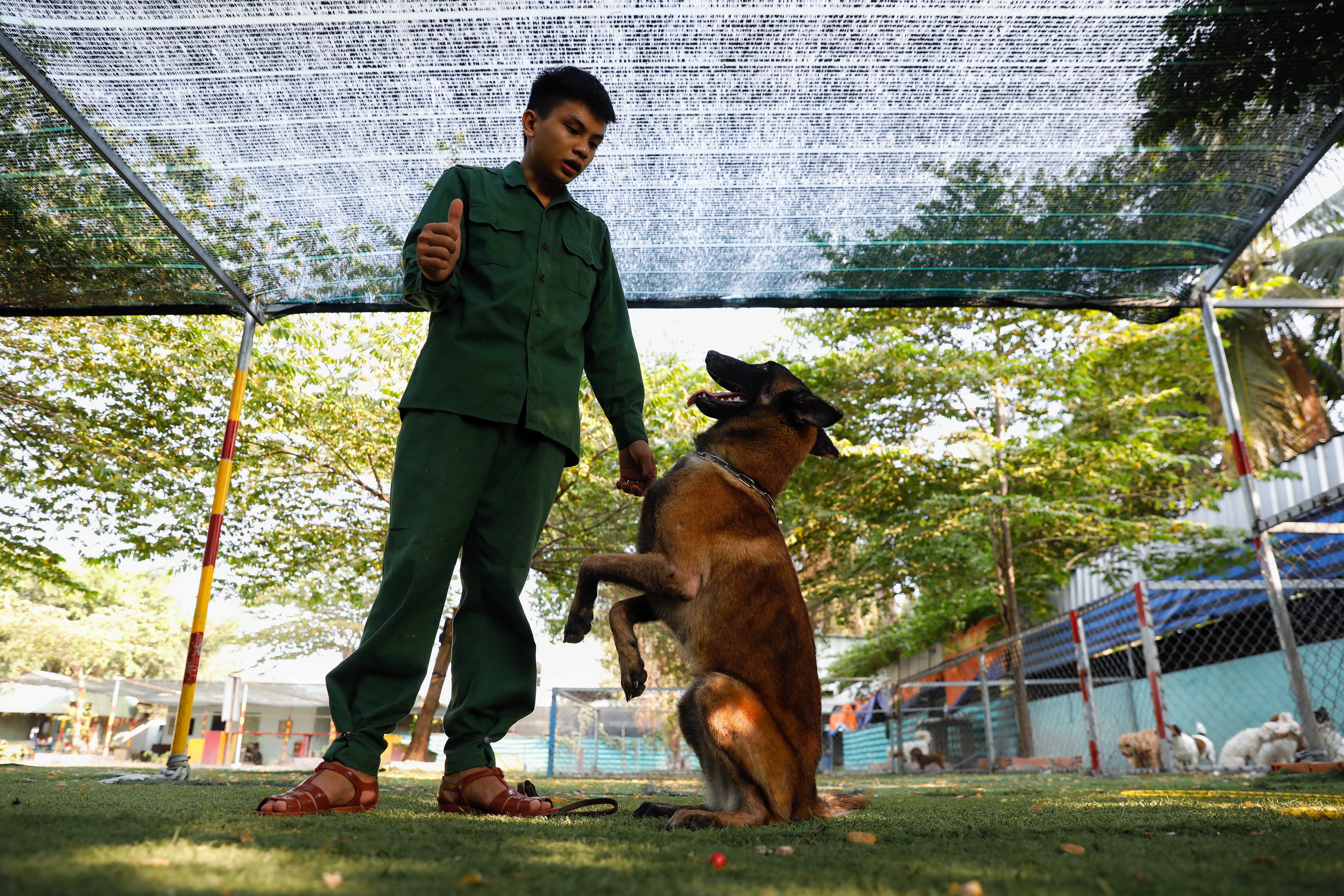 The day starts at 7 a.m. at the training school in Vinh Phu Ward, Thuan An Town of the southern province. The dogs are taught obedience and guard duties, among others. 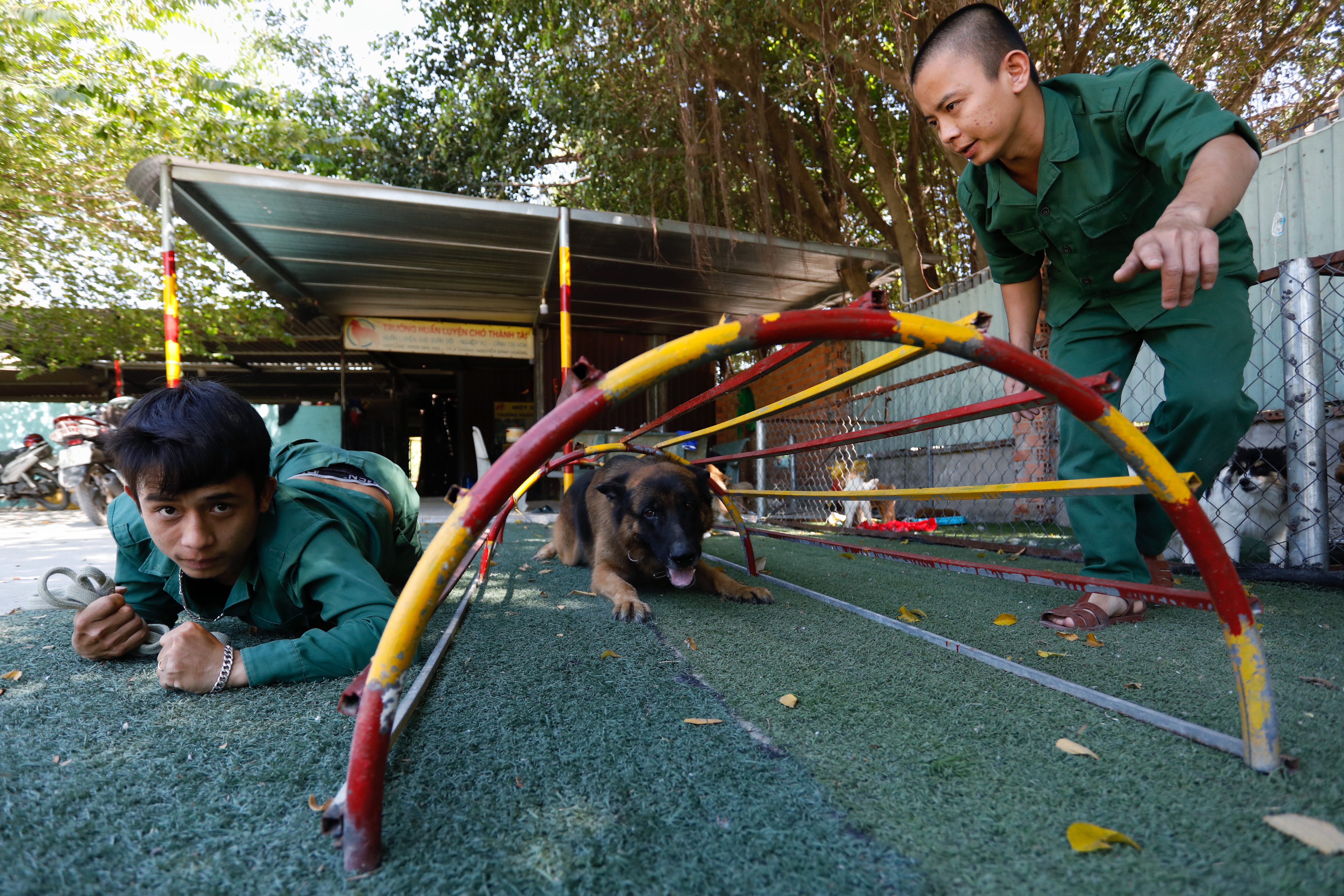 “For the dog to memorize its lessons, we have to organize three classes a week, from 7 a.m. to 11 a.m. When it’s hot, we let the dogs practice lighter lessons,” he said.

The school, which has 11 employees, trains over 100 dogs of multiple breeds. 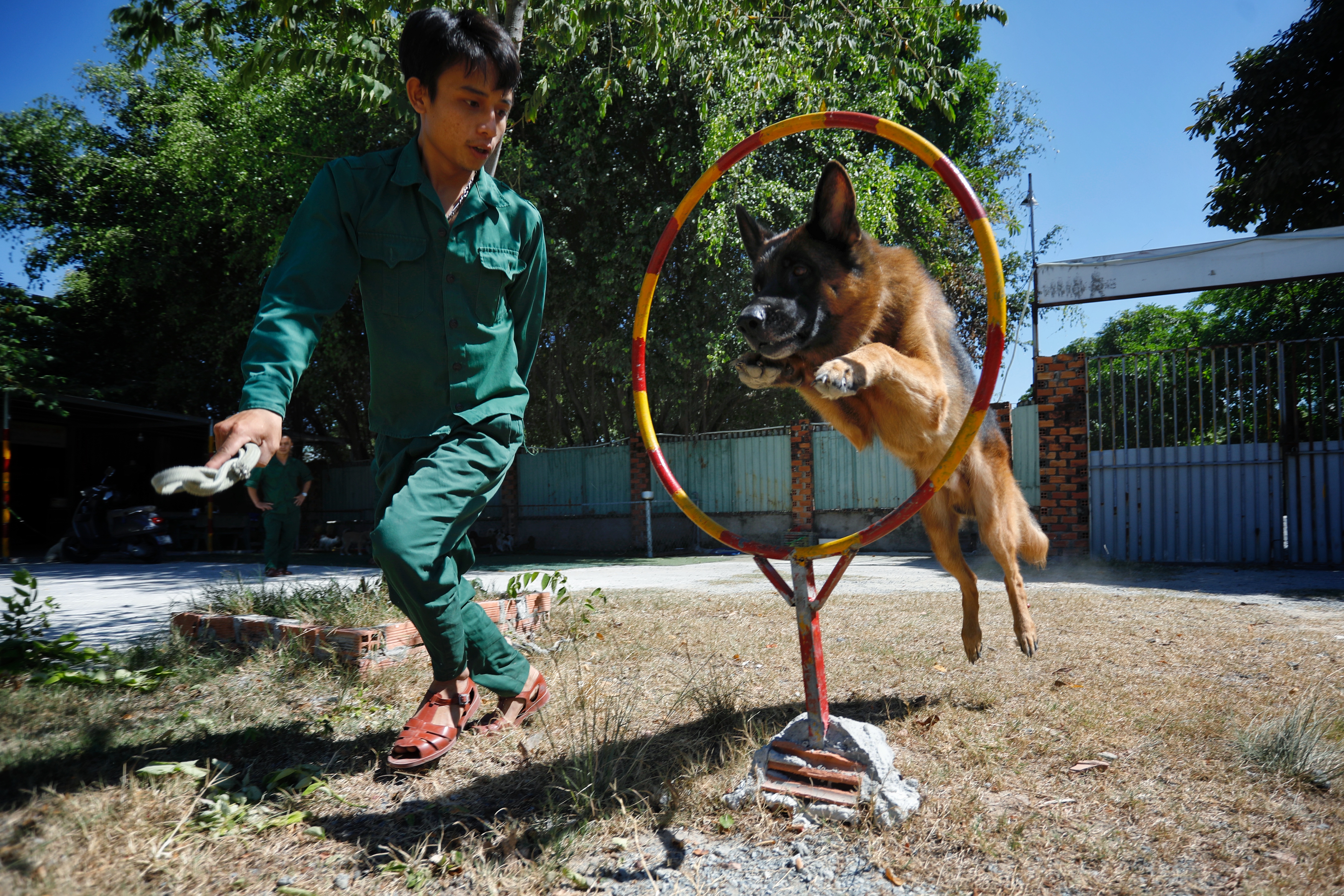 Ben learns how to jump through a hoop. It took him about a month to complete basic lessons.

“Like humans, for the training to succeed, trainers have to be strict during every lesson,” said Trung. 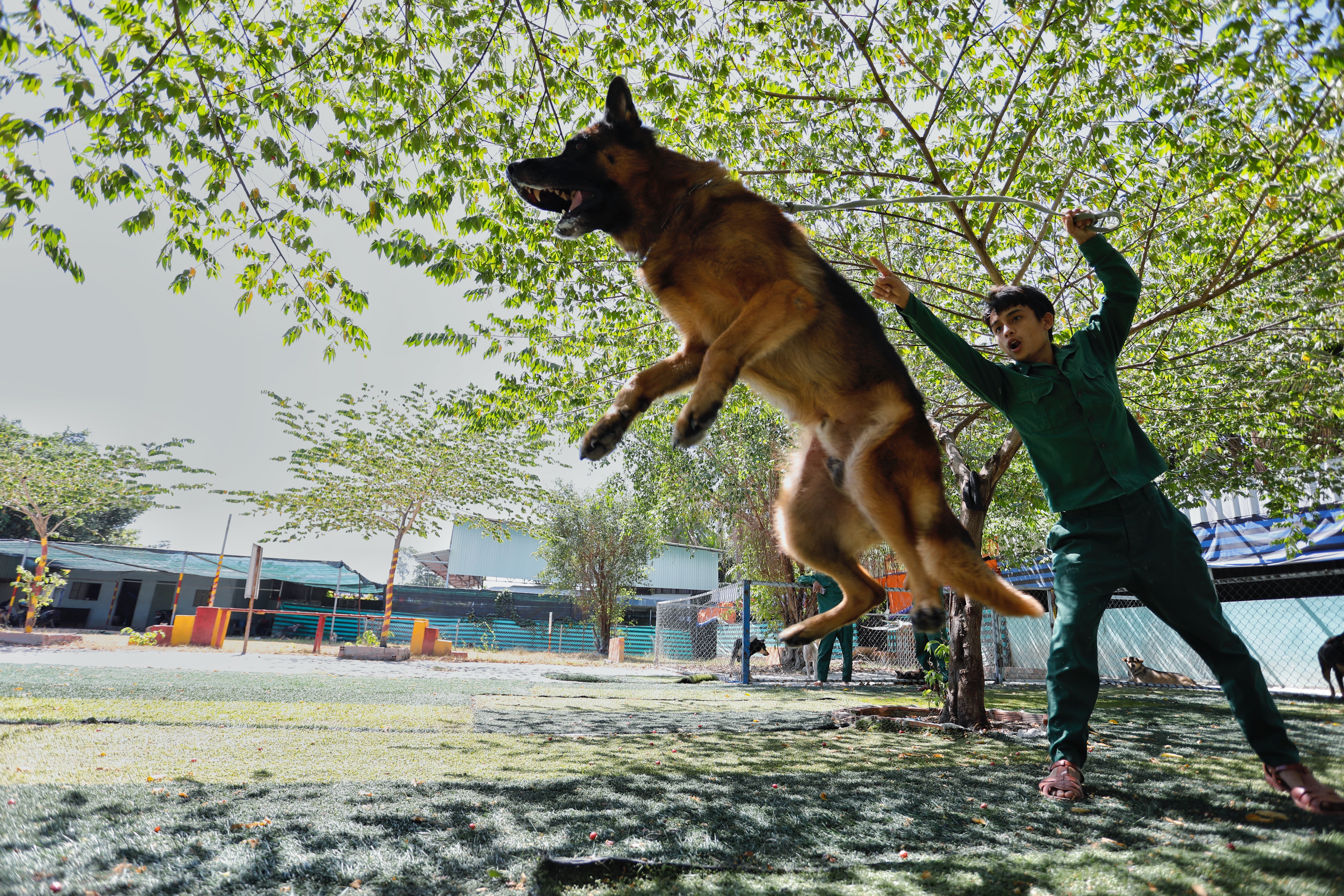 Each training course lasts around four months and costs VND2.5 million ($108) per dog.

“We can make around VND20 million a month, but it can also drop to just VND6 million. We do this because we have a passion and love for dogs. My friends are working in real estate or business, which brings in more money,” said Hoang. 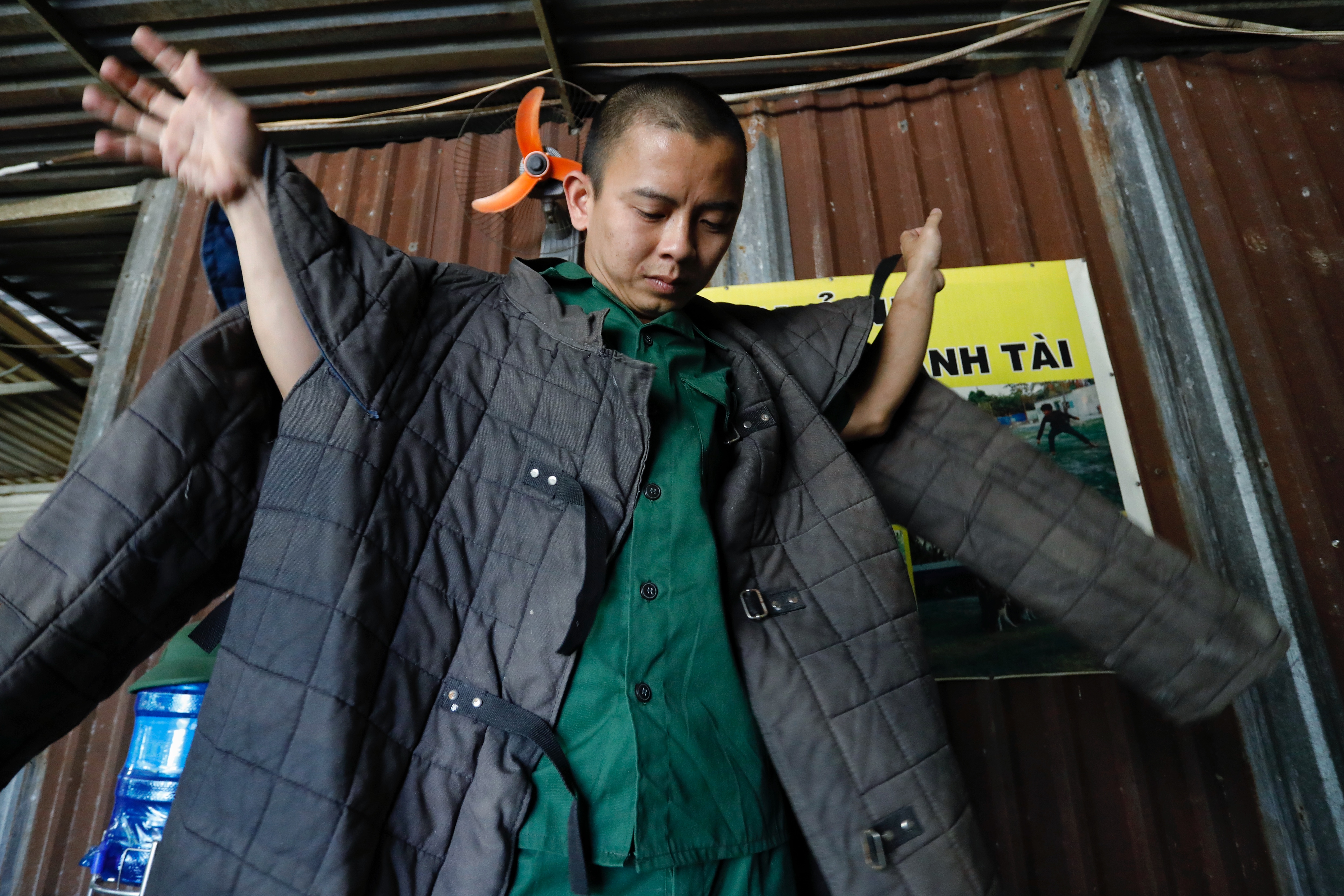 Hoang wears a suit for protection as he prepares to become a robber that the dog is trained to attack on order.

“I’ve been doing this for nine years. In the past I used to get bitten all the time. There was one time when I needed seven stitches,” Hoang said. 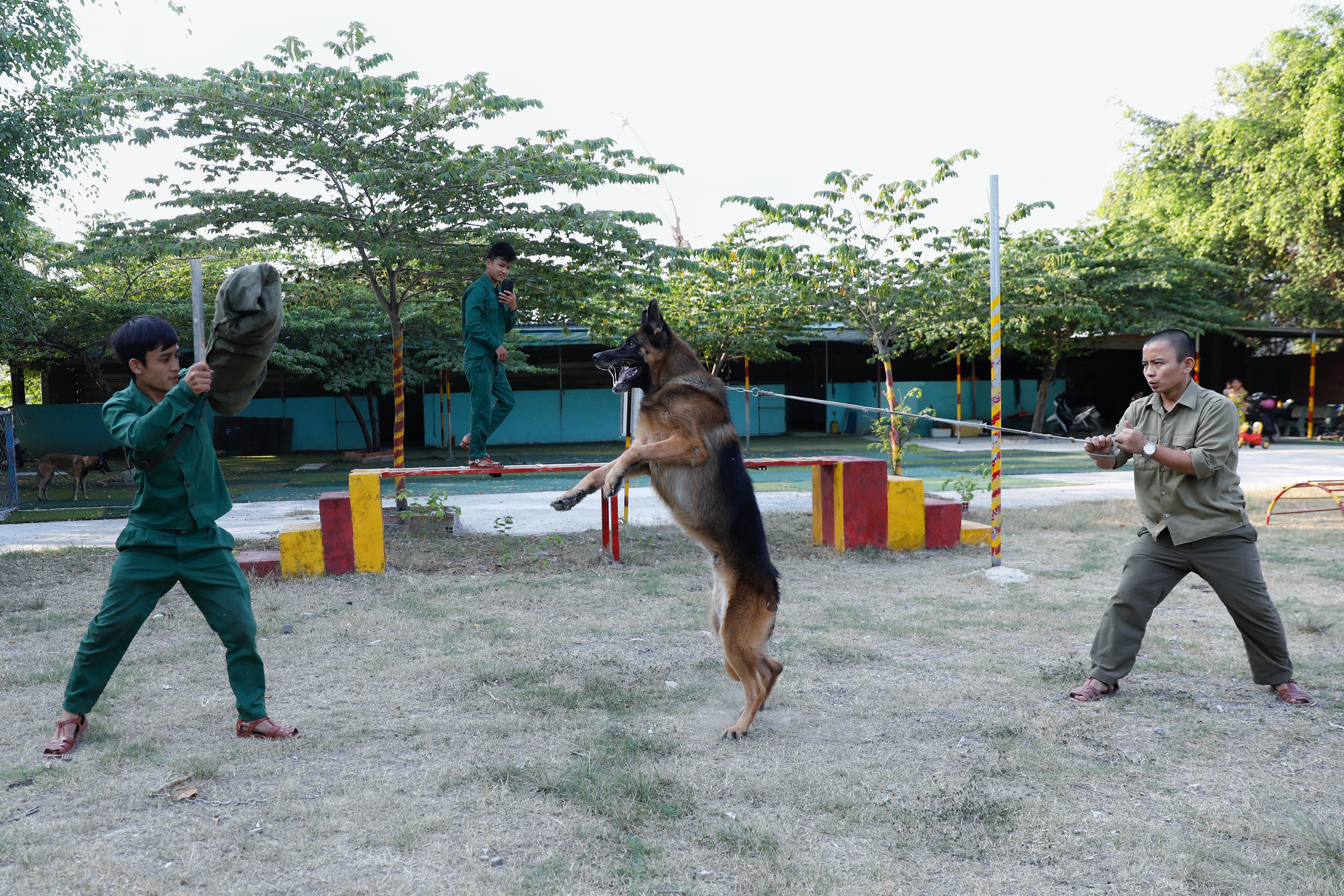 An “attack lesson” requires 2-3 people and is fraught with danger, with the slightest mistake resulting in injuries.

Per a predetermined script, the German Shepherd wrestles with the “robber” and can be ordered by the trainer to bit him. 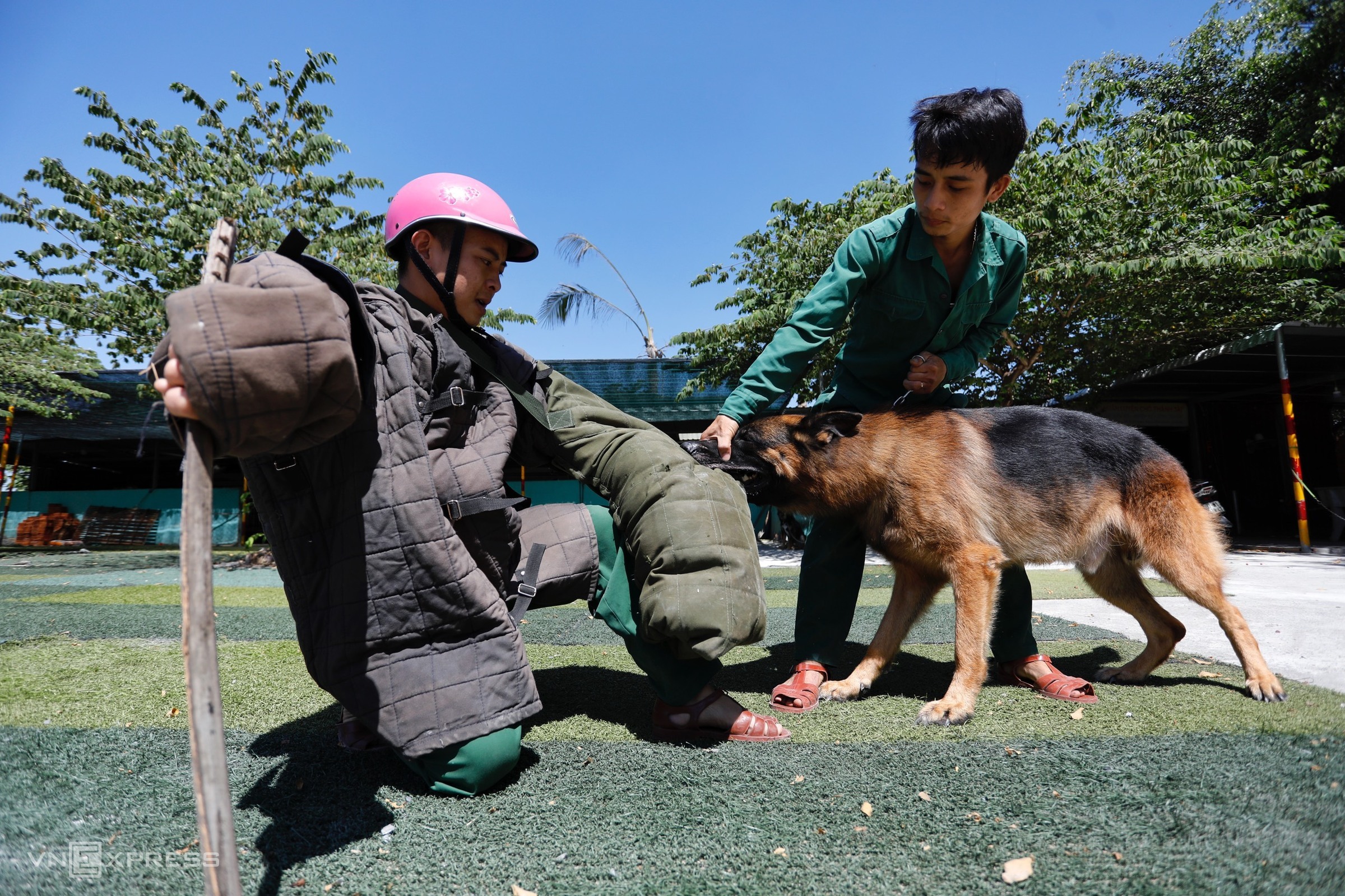 Each “attack lesson” lasts around 30 minutes and are introduced in the last three months of a course after the dogs get used to their trainers. 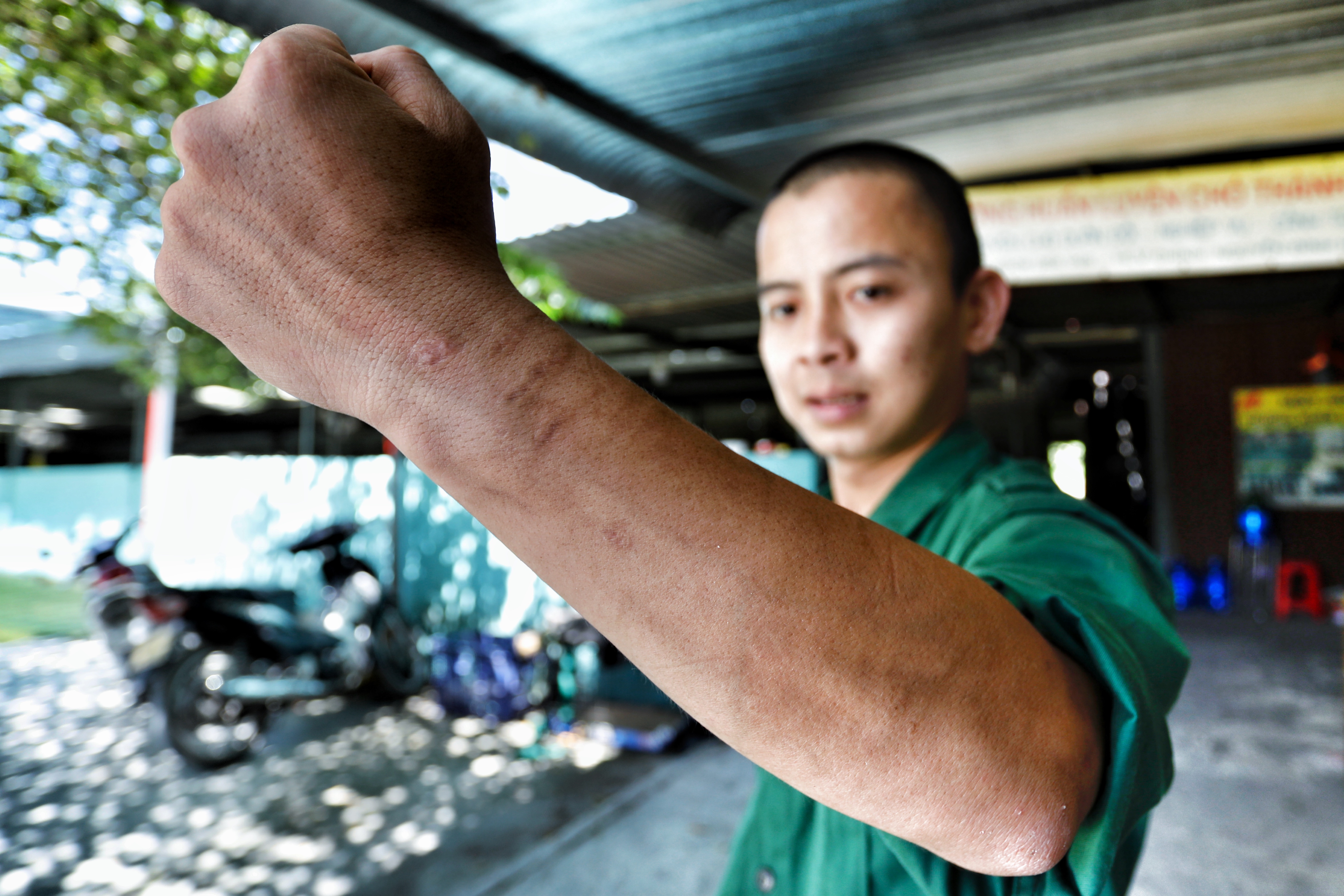 Hoang shows off scratches inflicted on his left arms.

“The first day at the job, I was cornered by a Rottweiler, but escaped, luckily. I don’t understand how I came to love the job and become so committed to it,” he said. 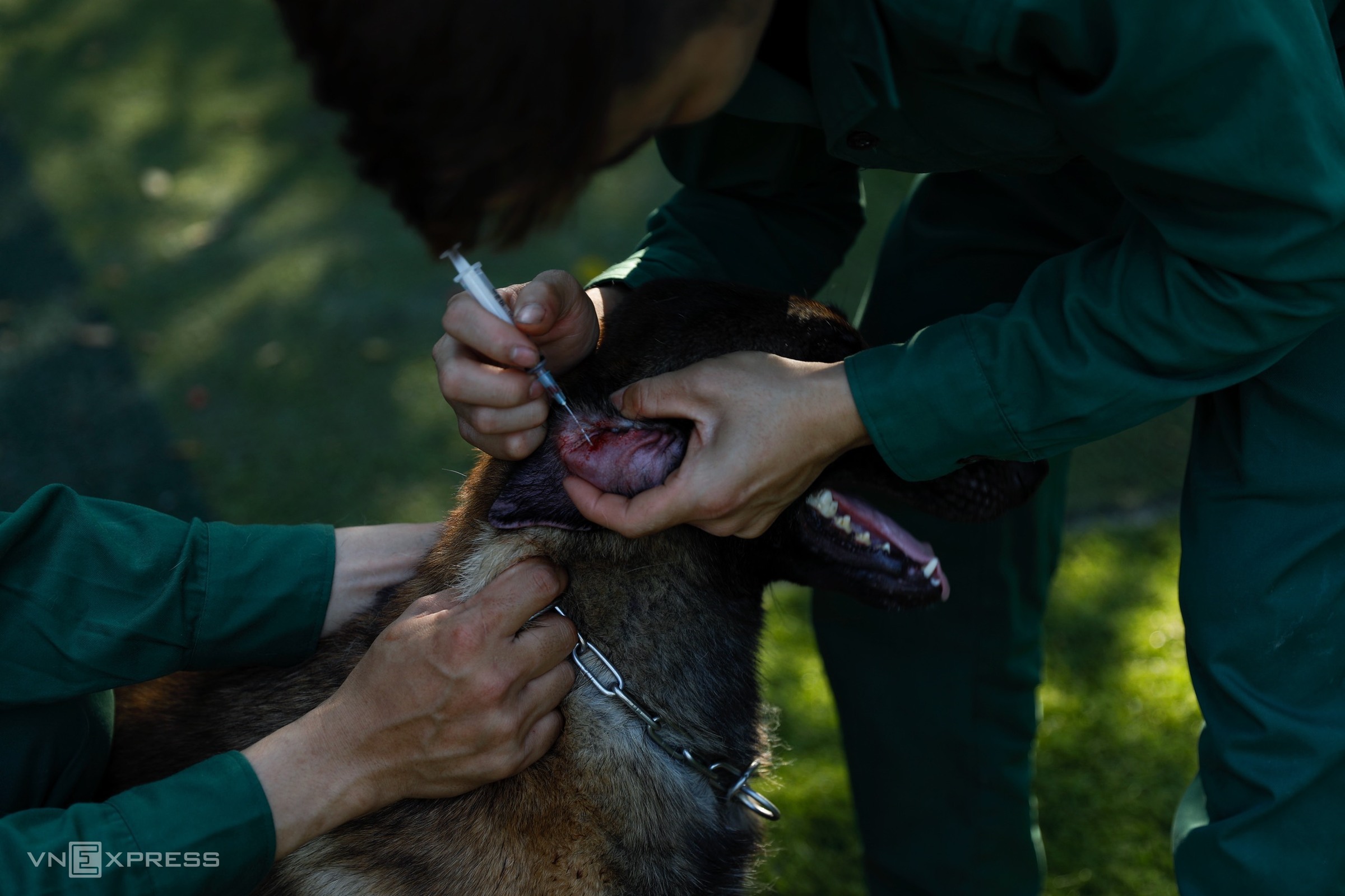 A dog gets some first aid. 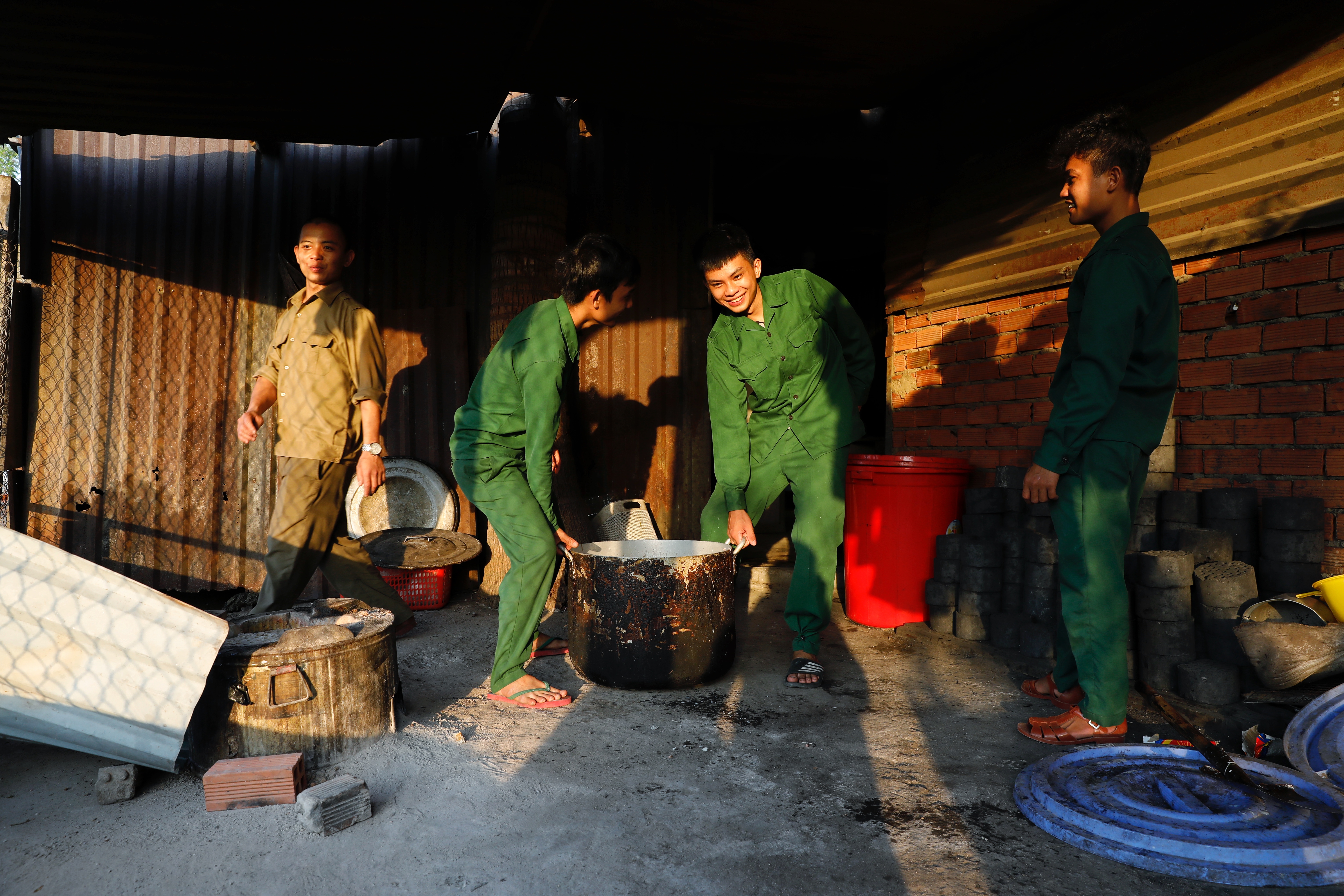 Chicken porridge is the most commonly cooked meal for the dogs at the training school. 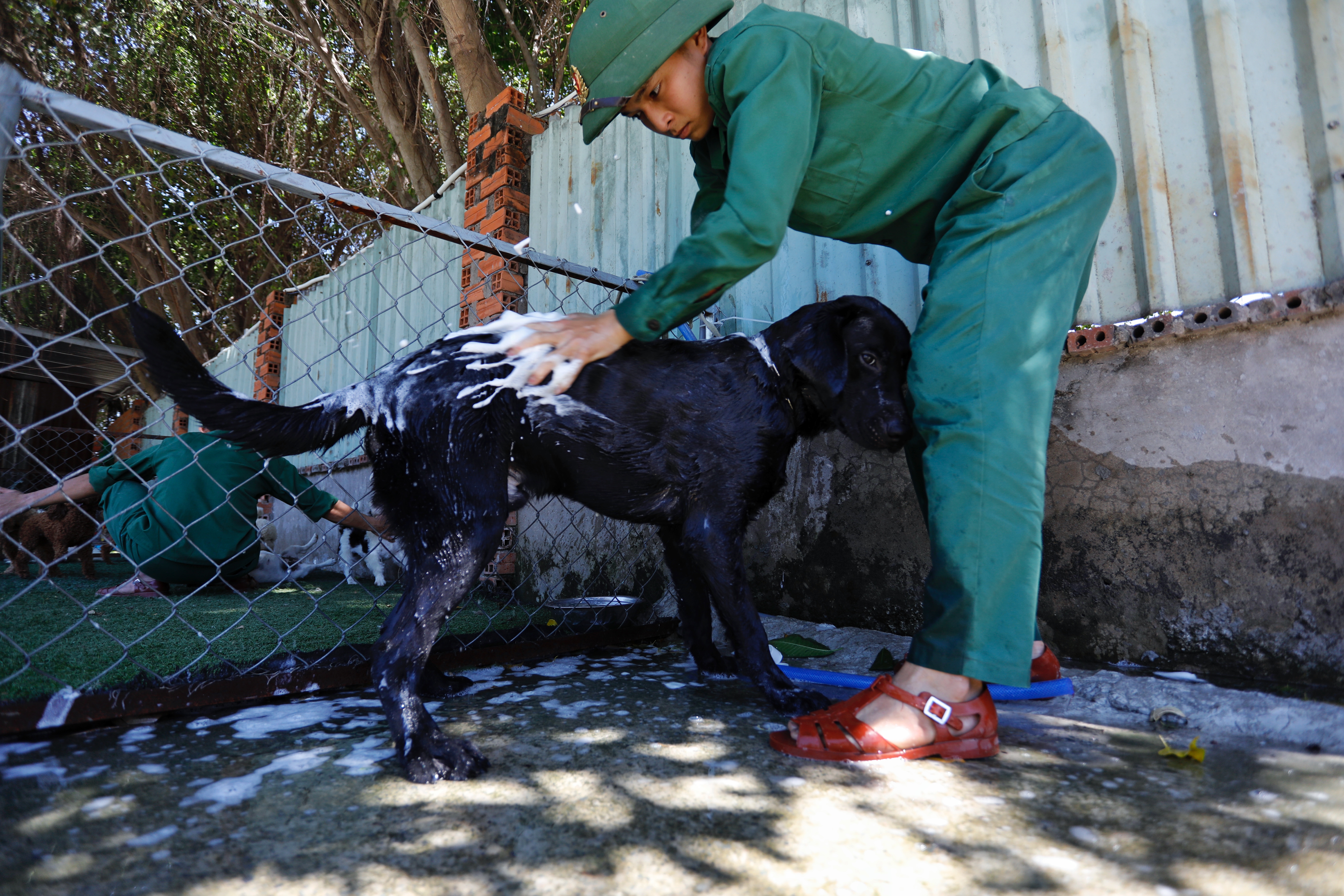 A dog gets a bath after a training session.

Hoang said he has become attached to his work. “Sometimes it’s painful and tiring, but if a day goes by without hearing the dogs bark or giving them a bath, I would miss it.”

Officers were patrolling along a street in District 12 on Thursday morning when they noticed two men with suspicious signs.

The officers believed the men to be dog thieves and decided to follow them.

They later arrived at a house with no address in Trung My Tay Ward, District 12, where they were about to sell some dogs.

The police examined the facility and found 51 dogs weighing 490 kilograms, which were being slaughtered.

Multiple tools suspected to be used for stealing dogs were also discovered at the location.

The two suspicious men were escorted to the police station to verify whether they had stolen the dogs.

The People’s Committee in Trung My Tay Ward imposed a VND2.5 million (US$108) fine upon L.V.P., 43, the house owner, for failure to meet veterinary hygiene standards.

P. was also required to pay an additional VND8 million ($348) to authorities to cull the dogs found at his facility in accordance with regulations.

Police in Vietnam’s Mekong Delta have arrested three men for stealing dogs and killing one of the dog owners during a struggle last weekend.

Chon and Thuan arrived at Tram’s house in Dong Thap Province, also in the Mekong Delta, at around 8:30 pm on Friday, according to the suspects’ statements.

Both brought along two pitchforks with wooden handles, while Tram prepared a homemade electric pulse and an electric battery, all of which would be used to stun and capture dogs.

The three consumed crystal meth until 10:30 pm the same day, before traveling to Tan Hung District, Long An Province on two motorbikes, bringing along their tools.

After stealing two dogs in a local neighborhood, the thieves headed to the house of T.T.H., 56, and noticed his dog walking on the sidewalk.

Tram approached the dog on his motorcycle, while Chon stunned the animal with the pitchfork charged with electricity as he sat on the back of the vehicle.

As they were putting the dog into a bag, H. and his son rushed to snatch back their pet.

Chon resisted and electrocuted H. with his pitchfork, causing the victim to collapse on the ground.

Chon ran away on the motorbike, while Tram stayed at the scene to help bring H. to the hospital.

The victim passed away shortly after, and Tram was escorted to the police station.

Chon and Thuan were hiding at a motel in Dong Thap Province when they were arrested by police.

Cho Ray Hospital in Ho Chi Minh City was recently selected by the International Society of Nephrology (ISN) as one of the newly-recognized ISN Regional Training Centers (RTC) for a five-year renewable period.

The official certificate of recognition was issued to Cho Ray Hospital by the Brussels-based association on Monday and is effective from now to 2026.

These centers were selected by the ISN Core Programs Committee as an institution of excellence in low and middle-income countries to provide training in nephrology, or the study of kidney function, to local doctors and health professionals from nearby low-resource areas through ISN grants.

They will also serve as a hub for ISN kidney care initiatives within an ISN region and facilitate locally-relevant research and advocacy strategies.

In addition, RTCs will provide up to twelve months of training in the nephrology areas of general nephrology, hemodialysis, peritoneal dialysis, transplantation, and pediatric nephrology.

Healthcare centers and medical establishments around the world can apply for recognition as ISN RTCs.

The unavailability of adequate organs for transplantation to meet the existing demand has resulted in major organ shortage crises.

The Ministry of Health yesterday organized a seminar on human organ donation in order to remove barriers in the Law on organ donation. According to health experts, though the law has taken effect on July 7, 2007, there have still been several inadequacies leading to shortage crises of organ donation while the demand is high.

From 1992, Vietnam started to carry out human organ transplantation for living people and in 2010, Vietnamese health workers began to perform transplantation on brain-dead organ donation.

As of December, 2020, medical workers in the Southeast Asian country have performed 5,587 transplants including kidneys, livers, hearts pancreas, hands and intestines.

Some 40,257 Vietnamese people registered to donate their organs after natural death and brain death; especially, 100 agreed to donate their organ when they are alive and seven of them are still alive. Presently, 20 approved medical centers can perform all transplantation techniques which other countries in the world can do.

However, Deputy Health Minister Nguyen Truong Son said that there have been some inadequacies in the law of organ donation. For instance, the regulations that people over 18 are eligible for donating their organs unintentionally limit the organ source from brain-dead people.

Solutions are needed to solve presently existing problems in the donation of human organs for transplantation. People should give their opinions for amendments for the law of organ donation but still adhere to the declaration of Istanbul on organ trafficking and transplant tourism, said Deputy Minister Son.

Dr. Tran Thi Cam Tu from the Hue Hospital’s Organ Transplantation Center said that law on organ donations in other countries in the world is open; for instance, British people under 18 are eligible for donating their organs and they can change their mind at any time while in Netherland, people from twelve can donate their organs.

In Vietnam, an estimated 10,000 people and thousands of people are waiting for kidney and liver transplants respectively. The rate of dead-brain donors in infirmaries is just 0.5 percent while 5,255 transplants were made by living donors; as a result, there has been very high likelihood of organ trafficking which is illegal, said Deputy Chairman of the Vietnam Society of Organ Transplantation Tran Ngoc Sinh.

Terribly, Dr. Tran Thi Cam Tu said that half of living organ donors are under 30 who usually sell their organs. Dr. Du Thi Ngoc Thu, Head of the human organ coordination unit in Cho Ray Hospital said that the hospital has refused to carry out transplant as it discovered fraudulent documents for organ transplants.

To eradicate trade of human organs, medical centers for transplantation should only conduct transplants on people in the waiting list. As scheduled, the Ministry of Health will submit amendments to the law on organ donation by 2022.

This was the assessment made by Dr. Tran Nam Nghiep, Director Of Strategic Partnerships for South East Asia at the University of Adelaide, South Australia.

According to Dr. Nghiep, the University of Adelaide has re-signed or renewed various memorandums of understanding (MoU) regarding training activities with many Vietnamese universities and research institutes in recent years.

Before the global outbreak of the novel coronavirus (COVID-19) pandemic, Nghiep said the Australian university had previously invited representatives of various Vietnamese universities to visit exhibitions aimed at discussing a range of co-operative opportunities.

At present, numerous scientists from the University of Adelaide are working alongside experts from the Polytechnic University of Ho Chi Minh City, the Hanoi University of Technology, Can Tho University, Hau Giang Hi-Tech Agricultural Park, and Atalink Company, in an effort to deploy various ideas through a bilateral research co-operation scheme funded by Australia’s Commonwealth Scientific and Industrial Research Organisation.

Dr. Nghiep said Vietnamese students are always viewed as industrious, intelligent, and studious who achieve strong academic results, thereby making a significant contribution to the scientific development of both South Australia and Australia as a whole.

Despite its negative impact, the COVID-19 has created a range of golden opportunities for the launch of distance training programmes whilst boosting joint bilateral training schemes on science and digital application between several Australian and Vietnamese universities.

Australian Minister for Education Alan Tudge recently urged universities and educational institutions to boost their recruitment of international students so they can invest more strongly in low-cost online courses and schemes that feature more flexible learning styles and locations.