How to transfer photos to new phone 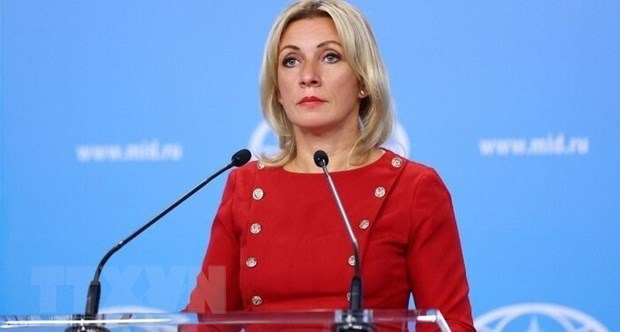 She made the remarks on the occasion of the 20th anniversary of the signing of the Vietnam-Russia strategic partnership statement (March 1).

The statement is a clear confirmation of the aspirations of Vietnamese and Russian people for enhancing the bilateral ties on the basis of the time-honoured friendship and mutually beneficial cooperation between the two countries, the spokeswoman said.

The signing is the result decades-long, effective collaboration between Vietnam and Russia across spheres, while demonstrating their determination to expand the relationship in the new historical context, according to the statement.

Zakharova said over the past two decades, the strategic partnership has reaped impressive achievements, with high-level political dialogues and visits at the highest level by leaders of the two countries maintained.

She highlighted the intensified exchanges between the parliaments, Parties and localities, and new cooperation mechanisms, saying Vietnam and Russia elevated their relationship to a comprehensive strategic partnership in 2021.

The solidarity and mutual support have been reflected during the fight against the COVID-19 pandemic, Zakharova said.

Vietnam and Russia have provided consultations and other necessary aid for each other, while sharing experience in the combat, she elaborated.

Given difficulties facing the region and the world, the comprehensive strategic partnership remains an important factor of Russia’s foreign policy in Asia-Pacific, the spokeswoman said. 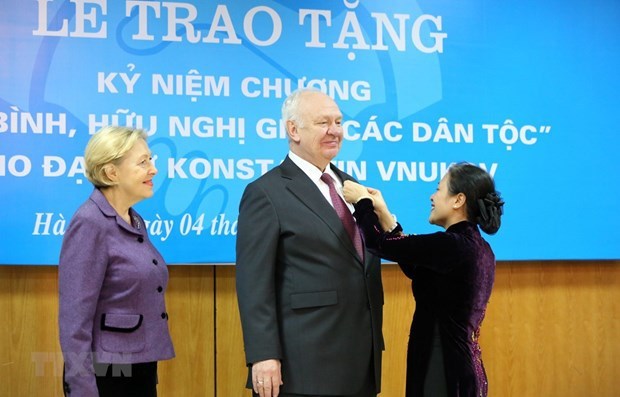 President of the Vietnam Union of Friendship Organisations Nguyen Phuong Nga presents the “For peace and friendship among nations”insignia to Russian Ambassador to Vietnam Konstantin Vnukov. (Photo: VNA)

On this occasion, Russia ’s TASS news agency had an interview with Russian Ambassador to Vietnam Konstantin Vnukov who said the bilateral ties have made progress over the past two decades.

Thanks to joint efforts, the two countries have reached serious agreements, even breakthrough ones, to strengthen the mutually beneficial relationship in all fields, the ambassador said.

Mentioning the free trade agreement between Vietnam and the Eurasian Economic Union, he said the deal has contributed to raising Vietnam -Russia trade to 5.7 billion USD in 2020 given the pandemic.

He stressed effective cooperation in oil and gas, with the formation of such joint ventures as Vietsovpetro, Rusvietpetro, Gazpromviet and Vietgazprom that have benefited both sides./.

The Hanoitimes – The two sides consider inter-parliamentary cooperation an important component of the strategic partnership between the two countries.

The first Vietnam-Russia inter-parliament meeting has opened up new areas of cooperation that are poised to foster the comprehensive strategic partnership.

“It would be right for us to work more intensively in the economic sphere, developing both foreign economic relations and goods circulation. It is clearly insufficient for the level of our relations. […] For our part, we must do everything to develop cooperation more effectively than today,” the State Duma quoted Viacheslav Volodin.

“When we talk about the work of our inter-parliament commission, it should do everything to ensure more dynamical development of foreign economic relations,” he said at the meeting.

Viacheslav Volodin supported the idea of creating working groups and said that the adoption of legislative decisions would entail a more active development of relations.

Economic in focus, oil and gas remain among key pillars

Both sides agreed to focus on economic ties.

Ngan said that it is necessary to discuss issues of cooperation in the oil and gas sector, agriculture, and tourism. She proposed having separate working groups for each field.

Vietnam expected to continue cooperation with Russia in power projects, especially one in the Center for Nuclear Science and Technology.

Viacheslav Volodin said the two countries need to do everything to develop more actively foreign economic relations and goods circulation so that Russian companies can more actively participate in the development of these relations, implementing investment projects.

He noted “It is extremely important to create all conditions for business development and implementation of investment projects both in Russia and Vietnam on the principles of developing bilateral cooperation.”

“If we reach US$10 billion (turnover), this will give an additional impetus to our countries. This will develop the economies of our countries and increase their prosperity,” said the chairman of the State Duma.

The leaders stressed the importance of more than 70 years of diplomatic relations and 25 years since the signing of the treaty on the principles of friendly relations between Vietnam and Russia, and the two parties.

Eleven new COVID-19 cases were recorded in Vietnam in the 12 hours as of 6am on March 2, and all are in northern Hai Duong province, according to the national steering committee for COVID-19 prevention and control.

The new cases are F1, who had close contact with previously confirmed patients and thus, have been sent to concentrated quarantine sites since February 28.

They are undergoing treatment at the COVID-19 treatment hospital No 3, based at Branch No 2 of the Sao Do University, of Hai Duong.

The COVID-19 tally in the country now stands at 2,472, 1,561 of which are domestic infections, including 868 reported since January 27, when the latest outbreak began.

Meanwhile, Hanoi has stayed free of new cases for 14 days.

Among those still under treatment, 66 have tested negative for the coronavirus SARS-CoV-2 once, 37 others twice, and 113 thrice, the treatment sub-committee said.

There are 58,758 people having close contact with confirmed cases or coming from pandemic-hit regions under quarantine at present./.VNA

The Hanoitimes – Half of the total Covid-19 patients in Vietnam are confirmed after the community transmission returned late in July.

Vietnam confirmed another 25 people infected with SARS-CoV-2 on August 13, taking the case count to 905, with more than half of infections found in the beach city of Danang where the virus reemerged three weeks ago.

The new infections included 14 in Danang, which continued to be the hardest-hit locality with 315 cases, and eight imported ones.

The widespread outbreak has prompted the government and local authorities to take tough measures, including lockdown, social distancing, wearing face masks in public places, among others.

In the latest move, the northern province of Hai Duong has decided to put its head city under lockdown from August 14.

HCMC – No new Covid-19 cases were reported in Vietnam this evening, March 2, while six more coronavirus patients have fully recovered and were released from hospital on the day, said the Ministry of Health.

Of the total number of infections, 1,561 cases were locally infected, with 868 being recorded since January 27 in 13 provinces and cities across the country. Among them, ten localities have reported no new Covid-19 community cases for 17 days, such as HCMC, Hoa Binh, Dien Bien, Quang Ninh.

The capital city of Hanoi also had gone 14 days without reporting any fresh locally-transmitted cases.

Further,  nearly 58,800 people linked to coronavirus patients or returning to Vietnam from pandemic-hit regions are undergoing quarantine, according to data of the ministry’s national steering committee for Covid-19 infection prevention and control. 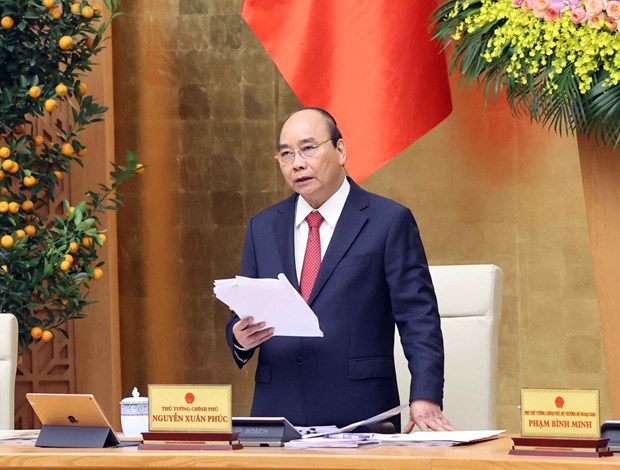 Making the request at the Government’s monthly meeting, the PM said vaccines must be quickly provided for the priority groups stated in the Government’s resolution, firstly the poor, disadvantaged families, and the ones vulnerable to coronavirus infection.

“We will try to give vaccine injections to as many Vietnamese people as possible,” he stress, adding that the budget for vaccination will be ensured so that every people can be vaccinated, which is a critical necessity.

Talking about anti-COVID-19 efforts, especially in Hai Duong, Hai Phong, Quang Ninh, and part of Hanoi and Ho Chi Minh City, he noted that thanks to numerous drastic directions by the Government and the National Steering Committee for COVID-19 Prevention and Control, the situation has basically been put under control.

Except for Hai Duong’s Kim Thanh district that still records several new cases, the used-to-be hotspots, particularly big cities, have controlled the outbreak well, PM Phuc said, describing this as another success of the fight against COVID-19 in Vietnam.

He also underlined the Government’s resolution issued following the Politburo’s approval of the vaccine import intention, thanks to which, the vaccine has been imported into the country. 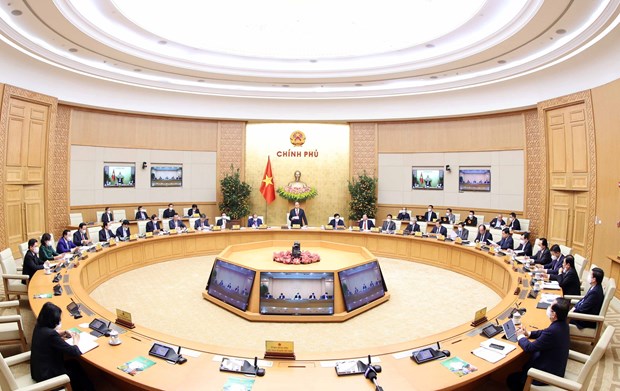 A view of the Government meeting on March 2 (Photo: VNA)

At the meeting, the PM said that at a recent meeting to review the Government’s preparation for the Lunar New Year (Tet) holiday, the Politburo and the Party Central Committee’s Secretariat held that the Government’s preparation efforts showed a “very high” sense of responsibility towards the people, especially underprivileged groups, the poor, and those in disadvantaged and disaster-hit areas, so as to ensure a warm Tet for all.

Pointing out encouraging signs in socio-economic development last month, PM Phuc highlighted a bumper crop with high prices in agriculture, along with high export and import growth in the first two months.

The two-month trade revenue was estimated at 95.8 billion USD, up 24.5 percent year on year. It included 48.6 billion USD in exports and 47.3 billion USD in imports, rising 23.2 percent and 25.9 percent, respectively. That resulted in a trade surplus of some 1.3 billion USD.

According to the Ministry of Planning and Investment, February’s consumer price index (CPI) went up 1.5 percent month on month, the strongest February CPI hike in eight years, and 1.56 percent against December.

Despite the COVID-19 resurgence, 18,100 new businesses with registered capital of 334.8 trillion VND (nearly 14.5 billion USD) were established in the first two months, up 4 percent and 52.2 percent, respectively.

Also at the meeting, Government members discussed ways to realise the most important target of combating the pandemic and facilitating socio-economic development./.