How to get a loan from bank

Its assets at the end of the quarter were worth nearly VND62 trillion ($2.68 billion), an increase of 16 per cent. Deposits and loans outstanding rose 15 per cent and 20 per cent to VND55 trillion and VND42 trillion.

Profit from bancassurance and card businesses were up two times and 2.5 times.

The bank also focuses on improving its risk management capacity.

Recently it received approval from the State Bank of Vietnam to open four new branches and 19 transaction offices, bringing the total number of outlets to 110 in 30 provinces and cities. — VNS

The programme features flexile loan terms with interest rates starting from 5.75 per cent per year.

“We believe in the power that finance can have to catalyse a positive impact on our communities and the environment. There is little question that environmentally-friendly vehicles are the trend of the future, particularly in the Vietnam context. Through the launch of this preferential loan programme, we hope to encourage the use of those vehicles and impacting the environment,” said Harmander Mahal, head of Consumer, Private and Business Banking for Vietnam and Asia Cluster Markets, Standard Chartered Bank.

The environmentally-friendly automobile loan is part of Standard Chartered’s sustainable finance programme, which aims to promote the adoption of greener lifestyles and reduce carbon emission.

In line with its sustainable development strategy, Standard Chartered is also launching sustainable trade finance solutions across Asia, Africa and the Middle East, Europe, and the Americas to help companies implement more sustainable practices across their ecosystems and build more resilient supply chains.

Fitch Ratings has recently revised the outlook on Standard Chartered Bank Vietnam to positive that reaffirmed the bank as a strong partner to Vietnam and its clients who seek to meet their growth ambitions sustainably. 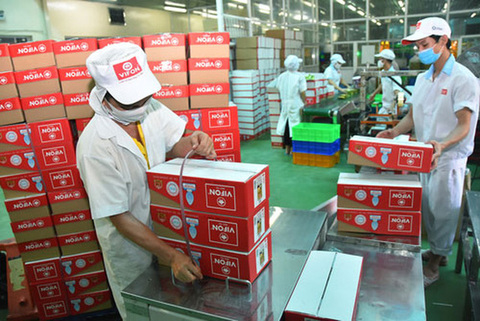 Strong increase in capital demand has been seen as production activities of enterprises gradually showed signs of recovery, forcing banks to reschedule their lending plans.

According to the State Bank of Viet Nam (SBV), deposit and lending interest rates continued to decline compared to the end of last year. The central bank required commercial banks to strictly control credit flow in risky areas such as real estate and securities to accumulate capital for production and business of priority sectors.

As of April 16, the economy’s credit increased by 3.34 per cent compared to the end of last year. In the first quarter of 2020, the credit of the economy only increased by 1.47 per cent.

Nguyen Hoang Minh, Deputy Director of the State Bank in charge of HCM City Branch, said capital mobilisation increased only 0.7 per cent while outstanding credit increased by 3.5 per cent compared to the end of last year.

Leaders at some commercial banks told media demand for capital from businesses and the market is increasing as the economy recovers from the COVID-19.

The deputy general director of one plastic company, which could borrow with the lowest interest rate in the industry at about 5.4 per cent per year, said: “Production and business activities recovered quite strongly compared to last year, and the company’s capital demand is large. Our enterprises are also classified as high credit, so they are given priority by the bank.”

Previously, the general director of Sacombank also said that many individual and corporate customers contacted the bank for loans. As credit growth target was only about 9 per cent this year, it could not meet all of the demand but instead focus on production businesses and limit the flow to real estate.

Nghiem Xuan Thanh, chairman of Joint Stock Commercial Bank for Foreign Trade of Vietnam (Vietcombank), said the bank’s credit balance increased by 3.7 per cent while the whole system increased by 2.93 per cent, adding the bank was number one in credit growth last year and continued to have the largest growth in term of credit so far this year.

Seeing the increase, the central bank again told commercial bank to manage their lending, in which they must offer low interest rates for production firms, helping them recover, while most of the commercial banks wanted to increase their credit limit to serve demand.

At the same time, leaders of many banks said that they would strictly control capital in risky areas such as real estate projects, BOT, and securities.

Leader of one large-scale joint stock bank said: “Banks are tightly controlling capital flows into real estate, especially in areas with land fever. For individual customers, if they ask for a loan to buy a house to live in, they will be given preferential treatment but if they borrow to buy a house as an investment to rent, the bank will apply higher interest and lending rates because of higher risk factors.”

Nguyen Tuan Anh, director of the credit department of SBV told the banking industry meeting on Q1 results that the central bank set this year’s credit target of about 12 per cent and it would be adjusted in accordance with the actual developments and situation.

Again, Anh said SBV required credit institutions to continue to expand their capital and focus on lending to priority areas and tightly control credit in potentially risky areas such as real estate, BOT projects, and securities.

At the same time, the central bank asked credit institutions to continue implementing solutions to overcome difficulties for people and businesses affected by the pandemic.

According to statistics to the beginning of April, 2021, credit institutions have restructured the repayment term for 262,000 customers with a loan balance of about VND357 trillion (US$15.38 billion) as well as exempting and reducing interest rates for more than 663,000 customers with outstanding loans of VND1.27 million billion, giving new loans worth more than VND3.16 million billion with preferential interest rates with accumulated sales from January 23, 2020. — VNS

The loan is mentioned in the HCMC Budget Development Policy Support Program (DPO-2), which has just been approved by the municipal People’s Committee.

Days payable outstanding (DPO) is a form of WB support that helps borrowers “achieve sustainable results through the process of policy and institutional reforms.”

The loan is expected to help the city fund infrastructure constructions and improve its management capabilities.

As currently envisaged, the entire disbursement amount from the program will be transferred to the city budget and spent on development projects under the public investment plan for the 2016-2020 period that have transitioned for implementation to the next five years.

Some of projects expected to benefit from the program include: building new general hospitals in Thu Duc City and districts of Cu Chi and Hoc Mon; a drainage system on Vo Van Ngan Street in Thu Duc; renovation of the Dam Sen canal; construction of embankments and tidal sluice gates on Cau Sap canal in District 8; and improving the drainage system on Ly Chieu Hoang Street in District 6.

The DPO-2 program will have a duration of three years, from the date the agreement between HCMC and WB is signed. Its financial mechanism would have the municipal administration re-borrow the capital on terms contained in the Financing Agreement for the DPO-2 program between the Ministry of Finance and the World Bank. The city will make its own arrangements to repay the debt on time.

According to the municipal administration, Prime Minister Pham Minh Chinh has allocated more than VND42.2 trillion ($1.83 billion) from the state budget for the city this year. Of this, official development assistance (ODA) would be VND14.8 trillion and the city budget would disburse nearly VND27.4 trillion from its own budget.

Meanwhile, the demand for capital of agencies this year is more than VND47.8 trillion ($2 billion), leading to an imbalance in capital allocation and a shortfall of VND20.4 trillion.

It is in this context that the HCMC administration believes that disbursement of capital from the DPO-2 Program in 2021 will help the city balance its budget for investing in development.

In the precursor programme, DPO-1, the finance ministry disbursed to the city in April 2020 a sum of VND2.86 trillion (around $124 million) arranged for 153 projects. As of January this year, more than 96 percent of the funds had been disbursed.

According to a report delivered at the BAC A BANK meeting held on April 26, the bank has completed its master plan on restructuring in 2016-2020 which has been approved by the State Bank of Vietnam. BAC A BANK has accomplished almost all of its goals.

Facing difficulties caused by the health crisis, BAC A BANK revised its business plans in a suitable manner with impressive results.

The bank’s loans have touched nearly 100 per cent of the initial plan, while bad debts sat at 0.79 per cent, lower than the earlier set target of 1.5 per cent, and BAC A BANK’s profit has reached 104 per cent of the plan. As of December 31, 2020, BAC A BANK boasted a transaction network of 146 spots, including one headquarters, 44 branches, and 100 transaction offices in 31 provinces and cities nationwide.

In 2021 which is the first year for BAC A BANK to implement its 2021-2025 business plan, the bank will continue building up and implementing its goals safely and effectively. In March 2021, BAC A BANK listed itself on the Hanoi Stock Exchange (HNX) with the BAB ticker.

The move has helped elevate BAC A BANK’s stature and prestige in the Vietnamese market, increasing the benefits for its stakeholders, and approach a new long-term capital mobilisation channel. This has also helped BAC A BANK operate more effectively and transparently in order to approach new investors. This is a firm foundation for BAC A BANK to continue growing strongly in the time to come.

In 2021, BAC A BANK aims to see a rise of 7 per cent in its total assets, 6.3 per cent in charter capital, 8 per cent for deposits, and 11 per cent for loans. Other goals have also been set, such as revenue from services ($4.57 million), pre-tax profit ($38 million), and the number of transaction spots will rise by nine.

BAC A BANK has also adopted a scheme to raise charter capital by another VND446 billion ($19.4 million) through issuing another 44.6 million shares in order to pay dividends. With this scheme, BAC A BANK has set a plan to reap an after-tax profit of VND700 billion ($30.43 million), up 19.66 per cent compared to the realised figure in 2020.

By BAC A BANK

Vietnam’s banking sector earnings are predicted to weaken in 2020, due to weaker credit growth, rising loss provisioning alongside a worsening of asset quality in a weak economic environment, as well as debt restructuring schemes, according to Fitch Solutions, a subsidiary of Fitch Group.

However, an acceleration in credit growth and an improvement in asset quality in 2021 should support a recovery in earnings in the banking sector, stated Fitch Solutions in its latest report.

On the demand side, continued uncertainty around the economic outlook will continue to spur businesses to delay capital expenditure, and this will discourage borrowing. On the supply side, tighter lending standards by financial institutions to guard against a build-up of bad loans will also weigh on issuance.

Meanwhile, Fitch Solutions expected banks to increase their loan loss provisioning in anticipation of a worsening of asset quality due to weak economic growth in 2020.

Between January and September 2020, more than 38,600 enterprises have temporarily suspended operations, up 81.8% year-on-year. Of this number, retail trade saw the largest absolute increase to 14,400, from 8,211, up 75.3% year-on-year, while real estate businesses saw the largest proportionate increase among all sectors at 161.4% to 1,103 enterprises over the period.

Debt restructuring schemes to reschedule debt repayments for companies unable to fulfil their obligations due to the Covid-19 outbreak, as well as possible exemption and reduction of interest and fees for delinquencies due to the pandemic, will also have a negative impact on bank earnings, Fitch Solutions suggested.

Nevertheless, as Fitch Solutions expected Vietnam’s GDP growth to reaccelerate to 8.2% in 2021, it predicted credit growth to pick up to 12%. An improvement in business revenues and debt repayment will also be positive for asset quality and reduce the need for loss provisioning, which will support earnings. Hanoitimes