How are student loans disbursed

A scientific article on Truong Thi Thuy Trang’s project on a new material made from rice husks, an agricultural by-product, that removes antibiotics in wastewater has been published in an ISI-Q1 international scientific journal. 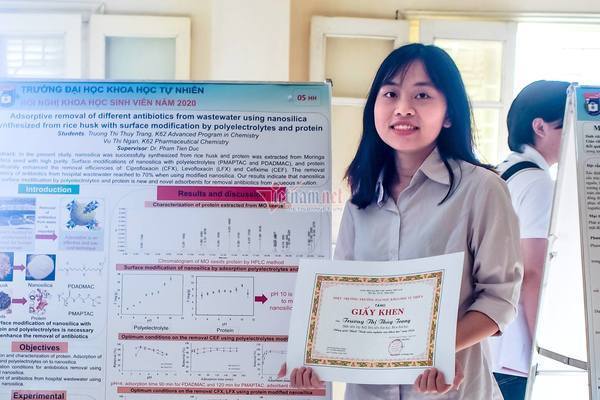 Trang is a student in the advanced training program of the Chemistry Faculty at the Hanoi University of Natural Sciences, a member school of the Vietnam National University, Hanoi.

The method helps prevent the release of antibiotics that affects the environment. The material used for adsorption is sustainable and environmentally friendly. Rice husks, which are thrown away by farmers, are now useful, thanks to Trang’s project.

In her childhood, Trang, when seeing wastewater going directly to the canal near her house, dreamed that she could clean up the canal when she grew up. The dream became more realistic when she began to study chemistry at university.

When she was a second-year student, she worked in the laboratory of Dr Pham Tien Duc, (Analytical Chemistry, Faculty of Chemistry, Hanoi University of Natural Sciences, Vietnam National University, Hanoi) and had the opportunity to study the creation of Nanosilica material from rice husks under Duc’s guidance.

The student found the project interesting as it could take full advantage of the rice husks generated during the agricultural production process to create new materials that support environmental cleaning.

After reading documents left by predecessors and international articles, she created an experiment execution plan and manufacturing process with the support of the teacher and co-workers in the laboratory.

“To create the material, I had to spend hours to carry out the stages of heating and drying rice husks,” she recalled.

“The teacher required that experiments be carried out repeatedly and carefully in each stage, saying that a minor mistake will lead to big failure,” she said, adding that she could not remember how many times she failed and had to repeat the experiments.

“My experiments for one month did not bring any results. I felt so discouraged as I could not find the reasons,” she recalled.

However, Trang finally found the problem and fixed it.

With great effort, Trang and her team succeeded and the project won first prize at the school’s competition for students’ scientific research and a consolation prize at a competition at the ministerial level.

Duc then encouraged Trang to collect data to write a scientific article.

The article was published in Progress in Organic Coating (ISI, Q1, IF 4.469).

Trang’s research found that the absorption capability is over 90 percent in laboratory conditions. The efficiency of removing antibiotics in hospital wastewater is over 75 percent. The material can be reused three times.

Trang said that it was difficult to write the article because good English skills are needed to exactly express her ideas.

“I try to practice English every day. Luckily, all the subjects at the school are taught in English,” she said.

Trang is now the author of two ISI-Q1 articles with high IF (impact factor), and the first author of one of the two articles.

Trang is an excellent student with a GPA (grade point average) of 3.5/4.0 during her four years at school. She is going to defend her graduation thesis in June. She plans to continue studying for a master’s degree and follow scientific research.

Childhood obesity has worryingly increased in Vietnam, with the prevalence of corpulence doubling after 10 years and the highest rate recorded in urban areas, where more than 40 percent of elementary school students are deemed obese, health authorities have warned.

The warning was given by the Ministry of Health at a conference held recently in Hanoi to announce the results of the 2019-20 National General Nutrition Survey.

As shown in the survey, which is carried out every ten years, the rate of overweight and obesity among school-age children (5 – 19 years old) climbed to 19 percent in 2020 from 8.5 percent in 2010.

That means this prevalence has more than doubled in the past decade.

In urban areas, the rate is 26.8 percent while those in rural and mountainous regions are 18.3 percent and 6.9 percent, respectively.

This rate among elementary school students in urban areas is as high as 41.9 percent.

Obesity not only affects appearance but also causes health problems, such as metabolic disorder, and elevates the risks of cardiovascular diseases, stroke, diabetes, and fatty liver, experts said.

It may also cause musculoskeletal disorders involving the tibia and spine, and undermine the immune system, especially in children whose weight is 10 kilograms above the standard.

“The main reason is an imbalance between energy intake and expenditure, which stems from parents compelling their children to overeat,” said Dr. Bui Thi Nhung, head of the School and Occupational Nutrition Department under the National Institute of Nutrition.

As a result, children may become obese from the preschool age and their obesity continues developing over the years, Dr. Nhung said.

Besides such incorrect assessment, many parents impose inappropriate development regimens on their children, resulting in an imbalance between diet, physical activity, and lifestyle, which leads to overweight or obesity.

Many parents, due to their hectic schedules, let their children eat the main meals out of their control, resulting in overeating.

A study by the health ministry shows that 39 percent of elementary school students in Hanoi and Ho Chi Minh City are not physically active as required.

Children who sleep less at night, for various reasons including spending a lot of time on smartphones or television screens, easily develop the feeling of hunger, which leads to excessive food intake.

Dr. Le Danh Tuyen, director of the National Institute of Nutrition, recommended parents use tools such as the body mass index to find out if their children have a weight problem.

It is necessary to create more playgrounds for children to help them improve their physique, Dr.  Tuyen said.

“We need a consensus and cooperation between parents, schools, and society to drive back childhood overweight and obesity,” he concluded.

Tra Vinh University and Lac Hong University are among best performing education institutions that WURI has highlighted in its global top 100 Innovative Universities.

Notably, Lac Hong came in 27th in the Ethical Value category, up six notches compared to the 2020 listing.

WURI highlights creative and innovative approaches to university research and education that focus on industrial applications, value-creating startups and entrepreneurship, social responsiblilty, ethics and integrity, and student mobility and openness for exchange and collaboration.

The HCM City Hospital for Tropical Diseases has been temporarily locked down. — Photo suckhoedoisong.vn

HCM CITY — The HCM City Hospital for Tropical Diseases has immediately begun preventive activities after a new case of COVID-19 was detected there.

The patient is an employee of the information technology department and tested positive for SARS-CoV-2 on Friday.

The hospital urgently implemented a rapid screening protocol and put plans in action to quarantine and take samples from all medical staff.

By Sunday morning, the hospital had completed RT-PCR tests for 887 employees and detected 53 positive cases for SARS-CoV-2.

The hospital also tested all 88 patients in severe departments such as tetanus, encephalitis, HIV/AIDS and chronic liver disease units. All of these tests were negative.

The 53 employees who are positive are currently quarantined and receiving treatment, with 52, who have been vaccinated, completely asymptomatic.

HCM City on Sunday loosened social distancing in Gò Vấp District after the COVID-19 situation there was put under control.

Leaders of the city requested the district authorities continue monitoring and ask people to make health declarations if they show symptoms of COVID-19. — VNS

As many as 225 Vietnamese citizens from Japan were brought home on a repatriation flight which landed safely at Danang International Airporton the evening of September 22. A plane carrying Vietnamese citizens from Japan lands at Danang International Airport on the evening of September 22. Photo by Danviet.

According to the Ministry of Foreign Affairs, the flight was arranged by authorities of the two countries and budget carrier Vietjet Air.

Passengers include children aged under 18, the elderly, the ill, pregnant women, stranded tourists, workers whose visas or labour contracts expired, students with no residences due to dormitory closures and those in extremely difficult circumstances.

After landing at the airport, all passengers and crew members of the flight were given health check-ups and sent to quarantine areas.

To date, more than 130 repatriation flights have been arranged by Vietnamese authorities since April 10 to help over 37,000 local people stranded abroad due to Covid-19 return home, the ministry said, adding that more such flights are set to be conducted in the coming time.

KKR, one of the world’s largest investment firms, has unveiled details of an investment of US$100 million made in EQuest Education Group through the KKR Global Impact Fund, according to business news outlet DealStreetAsia. EQuest has a complete education ecosystem for more than 110,000 Vietnamese students (Photo: Equest)


This marks the fourth global investment in the field of education and workforce development based on the KKR Global Impact Foundation’s “lifelong learning” orientation.

Along with Vinhomes and Masan MEATLife, this is the third Vietnamese enterprise that has received KKR investment. As of March 31, the company’s total global assets amount to US$367 billion.

Ashish Shastry, co-head of Asia Private Equity and head of Southeast Asia at KKP, revealed that investing in Vietnam and supporting its businesses and industries remains a crucial strategy of KKR in Asia.

Furthermore, the country’s elevated status among the global economic stage, coupled with access to affordable and high-quality education, will be an important factor in meeting its objectives, according to Shastry.

Established in 2003, EQuest is currently one of the largest private education companies in Vietnam and regularly has over 110,000 students enrolled annually.