Old dracontomelum or Sau trees give Hanoi a special present for their beauty and as a food.

Dracontomelum trees have been a part of Hanoi for a long time, beautifying the city, especially in April and May, as well as contributing an important ingredient for typical dishes.

Poetic picture in the foliage

Hanoi has special foliage seasons which are autumn and the time between spring and summer. It is when dracontomelum trees change their leaves, creating a poetic picture of the capital.

Dracontomelum is among popular trees planted for shading in Hanoi since the late 19th century. It can be found mostly in the streets of Tran Hung Dao, Phan Dinh Phung, Tran Phu, Dien Bien Phu, Ly Nam De, and around Hoan Kiem Lake in the center.

Only a few days before summer arrives in April, Hanoi suddenly changes its coat. It is brightened by the yellow dracontomelum leaves under the golden sunlight.

When breeze blows, hundreds of leaves fall from the branch and fly in the air like an exotic rain of golden leaves. In fact, it rains very often this time and when it stops, dracontomelum leaves cover roofs and sidewalks, weaving beautiful yellow carpets of nature.

Particularly, different from deciduous trees that become bare in their abscission, dracontomelum’s young green leaves grow while old yellow ones fall down.

Moreover, clusters of white little flowers also start to blossom, spreading its gentle fragrance around, before dropping together with old leaves.

It seems that by shedding leaves, the trees are slowing the busy and bustling Hanoi a little bit and changed it into tranquil poetic town like in romantic movies, attracting many people coming to take a walk or do exercise and enjoy the nice view.

At the same time, others sipping their cup of coffee under these streets also enjoy the picturesque scene.

Furthermore, many young women put on ao dai (traditional dress) and come here for taking photos, adding more charm to the lovely scenery of Hanoi that impresses visitors and gives the nostalgia of it to those who used to live in the city.

The foliage season of dracontomelum is very short. When people are still enjoying it, it leaves unnoticed, making them miss it and look forward to the next season.

After admiring the charming foliage season of dracontomelum, Hanoians are eager to enjoy its fruit. Skillful and creative local women have made tasty food with dracontomelum fruit.

With its special sour flavor, dracontomelum is an important and irreplaceable ingredient for the preparation of typical dishes of the city such as simmered duck with dracontomelum, sweet and sour soup with rib or pork, sour braised meat, fish or shrimp, or sour soup of morning glory – a very popular dish of every family to cool down the heat in summer.

Dracontomelum is favored so much that people try to preserve the fruits in cold storage which are only available in summer to use for the all year round.

Thereby, dracontomelum juice is created from home-made syrup to enjoy with ice, making it a popular sweet and sour beverage of the local people, ideally to cool off in summer.

Besides, dracontomelum fruits are also dried in the sunlight before being mixed with salt, sugar, and ginger, perfect for snacks, especially in winter. Dracontomelum dried fruits are among one of the typical foods of Hanoi, a popular gift for visitors to bring home.

With the beautiful shaded roads, pretty carpets of leaves and flowers, and delicious specialties, dracontomelum contributes a legacy to the land of thousands of years old. 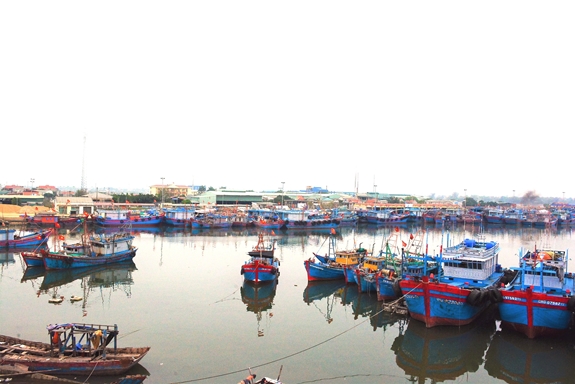 Hundreds of big and small boats quietly are anchored at Lạch Hới fishing port in Thanh Hoá Province’’s Sầm Sơn City although the first months of the year was considered as the “golden season” for fishermen. Photo qdnd.vn

THANH HÓA — Central provinces are facing a shortage of workers for the fishing industry in both quality and quantity, posing challenges to the sector as many boat owners are forced to sell their vessels and change jobs.

With a coastline of 102km, Thanh Hóa Province has a long fishing history. However, offshore fishing fleets in the province are struggling while fewer locals are involved in fishing.

The hustle and bustle in the past is absent at Lạch Hới fishing port in Sầm Sơn City, where once large baskets full of freshly-caught seafood were transported ashore and then delivered elsewhere.

Now, hundreds of big and small boats are anchored at the port, even though the first months of the year are considered the “golden season” for fishermen.

“Our port now operates at about 35 per cent of its capacity,” he said, lambasting economic restructuring which has pushed local workers away from fishing.

Phạm Gia Sơn, a shipowner, said his family has fished for many generations.

“We used to make 3-4 fishing trips a month and need 12-14 labourers for a trip but we have faced a lot of difficulties in the past two years due to the scarcity of workers,” he told Quân đội nhân dân (People’s Army) newspaper.

Sơn said some people with years of fishing experience have shifted to other jobs.

“Although we are fully prepared to sail offshore, our ship is docked for days because we can’t find enough workers,” Sơn said, adding that there were trips that only the shipowner and chief engineer are professional and the rest are seasonal labourers.

His company has six large ships specialising in fishing logistic services. Each trip requires 12-15 workers but they could only employ 8-10 people.

Due to the lack of labourers, the company has to hire workers from other localities, even inexperienced people from mountainous districts such as Quan Sơn, Quan Hoá, and Mường Lát.

He said unstable income and hard work were causing fishermen to seek other work.

A decline in fisheries resources, the shrinking size of traditional fishing grounds and low efficiency were also problems.

The effect of the COVID-19 pandemic, storms and floods and extreme weather as well as the rising cost of gasoline and labourers have led to inactive fishing boats.

A similar situation has been reported in other central provinces including Nghệ An, Hà Tĩnh and Quảng Bình.

The number of labourers engaged in fishing has decreased in Nghệ An Province in recent years. Worse still, there are few seamen aged between 18 and 35 and 30 per cent of the marine workforce is more than 60 years old.

Nguyễn Văn Ước from Quỳnh Long Commune in Quỳnh Lưu District said he had joined with seven households in the commune to build a fishing boat with an engine capacity of 717CV.

However, they had to sell the ship at the end of last year for VNĐ1.7 billion (US$73,557), less than a third of the initial cost, because there were not enough seamen to man the ship.

Selling the ship meant they had to find other jobs.

“This requires fishing activities to renovate themselves to keep up with the current trend,” he said.

Coping with the labour shortage, many boat owners in Quảng Bình Province’s Bố Trạch District had to retain workers by paying their salaries in advance.

Shipowner Nguyễn Ngọc Hải in Bố Trạch District said: “It is difficult to recruit enough workers who will accompany us. Thus, labourers will get paid in advance to entice them.”

However, some people did not work for them after receiving the salary, he said.

As the shortage of labour has harmed the livelihoods of fishermen and fisheries exploitation and processing, localities in the central region have adopted solutions to deal with the problems.

Cường, the head of Thanh Hóa Fisheries Sub-department, said the province has encouraged boat owners to use modern equipment in fisheries exploitation such as sonar fishfinders and promote mechanisation in the fishing and net collection stages to boost exploitation efficiency and reduce the number of employees on the fishing vessel.

“In the short term, we are suggesting localities to have support policies for fishermen to change their jobs to ease their concern over income and livelihood.

“Special attention should be paid to reducing the pressure on exploitation in coastal areas,” Cường said.

Lê Cẩm Long, head of Bố Trạch District Agriculture and Rural Development Subdepartment, said for the fisheries to develop sustainably as well as bring adequate income to people, local authorities were directing communes to restructure occupations accordingly and expand the fishing grounds to the Trường Sa area to catch more valuable fish while reducing the pressure of exploitation in the Gulf of Tonkin.

Trần Như Long, Deputy Director of Fisheries Sub-Department of Nghệ An, said in the long-term, it was necessary to take measures to regenerate resources in the direction of both exploitation and protection due to declining marine resources.

“Only when the aquatic resources are well regenerated and people enjoy exploitation and have better income, then people will engage with the sea again,” he said.

Lê Ngọc Linh, Director of the Fisheries Sub-Department of Quảng Bình, proposed the Government study practical and long-term policies such as banning sailing during the fish breeding season and providing fuel for fishermen.

More attention should be paid to dissemination work, calling on fishermen to increase labour productivity and get training on how to exploit marine resources effectively, he said. — VNS

At the 2021 annual general meeting of shareholders, Phat Dat approved the third dividend payment (the final dividend) of 2020 at the rate of 11.7 per cent in shares, resulting in a total of 3-time share dividends for 2020 at 28.7 per cent. This is a strong affirmation of the benefits the company offers from dividends for its shareholders and investors.

Dividends have been made regularly and continuously, bringing the total dividend ratio up to 53.7 per cent since 2019.

In 2020, Phat Dat made three share dividend payments to shareholders: 7 per cent, 10 per cent, and 11.7 per cent for the last payment expectedly made in the middle of the second quarter of 2021. Previously, tapping 2019’s profit, Phat Dat paid two dividends, including 12 per cent in cash and 13 per cent in shares.

Distributing 2020’s profit by stock dividends enables outstanding benefits to shareholders and investors, showing the Board of Directors and Board of Management’s great determination to promote the interests of the company’s investors and shareholders.

Thus, by way of share dividends, shareholders and investors will receive the following benefits:

As of April 6, 2021, Phat Dat’s shares price were valued at VND67,800. According to SSI’s assessments on investment and valuation, “SSI produces recommendations by applying RNAV [area navigation] method, and PDR’s RNAV is 4 per cent higher than the current share price. Presently, PDR is trading with 2021’s P/E and P/B of 12.4x and 3.8x, respectively.”

Simultaneously, PDR’s share price has increased by 138 per cent compared to 2019 and is expected to continue to grow in the coming time, providing even greater benefits to investors and shareholders.

Second, the average time shareholders receive additional shares is only 1 month (compared to the market average of at least 2-3 months) thanks to the company’s synchronous process to create favourable conditions crediting shares on investors’ accounts.

Finally, PDR’s liquidity on the market is considerably high, especially after PDR entered the VN30 basket.

In 2015-2020, Phat Dat achieved a high growth rate in terms of business results, sustainable financial structure, and improved profitability, resulting in the net revenue increasing by 8.8 times (a compound annual growth rate [CAGR] of 54 per cent) and in the after-tax profit of the parent company’s shareholders increasing by 7.6 times (a CAGR of 50 per cent).

Therefore, the company possesses a stable cash flow to pay cash/share dividends to shareholders regularly at a rate of 20-30 per cent per year from the distribution of after-tax profit.

Thus, with the upcoming 11.7 per cent share dividend, PDR wishes to constantly increase benefits and surplus value for shareholders and investors in the future.