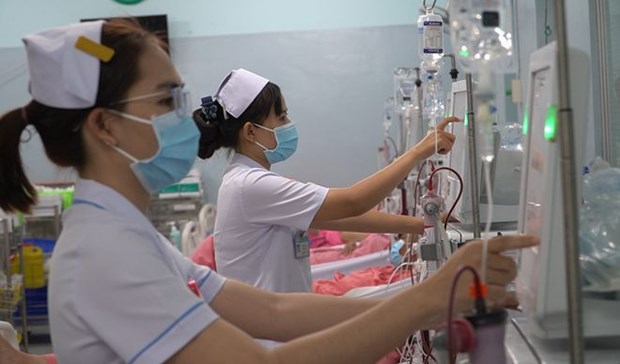 Hanoi (VNA) – Cho Ray Hospital in HCM City has been selected as one of 21 regional training centres of the Belgium-based International Society of Nephrology (ISN).

The hospital will become a training centre in nephrology (the study of kidneys) over a five-year period to 2026, and that status will be maintained if it fulfils ISN’s criteria.

Cho Ray will provide in-depth specialised training to improve patient care in Vietnam and other countries in the region in the fields of general nephrology, hemodialysis , peritoneal dialysis, and transplants.

Training activities will be in the form of hosting fellows and educational meetings and workshops on regionally relevant topics, and sharing knowledge and expertise via the ISN Educational Ambassadors of Continuing Medical Education programme, among others.

The COVID-19 pandemic has pushed the aviation industry into heavy losses by suspending flights and closing borders, making it impossible to travel abroad and hampering manufacturing at factories and workshops. Social distancing measures have been implemented, trade promotion and investment activities have been cut back, businesses have been struggling, and unemployment has been increasing.

When it rains, it pours, they say – and the pandemic was not the only hardship for the country last year. With the consecutive historic floods at the end of the year, the central region was overcome with losses and pain.

“But the more difficult the situation is, the more powerful and united Vietnamese people are, solidly forming a strong wall to overcome the crisis. That is the motivation behind Sao Do Group’s activities, together with other businesses and benefactors who headed immediately to the central region,” shared Nguyen Thanh Phuong, general director of Sao Do Group.

Responding to the call of Hai Phong city, Sao Do Group contributed 2 billion VND to the Support Fund for Central region.

At the end of October 2020, when Storm No.9 was raging, Sao Do Group has also sent a delegation to directly aid and support the storm and flood-ravaged Quang Binh. 1,600 gifts including medicine, food, and life jackets with a total value of VND160 million ($6,960) were given to the residents of Le Thuy, Quang Ninh, and Phong Nha districts in Quang Binh province by Sao Do Group.

Returning to Quang Binh province after the storm No. 9 passed, a member of the Sao Do could not help but grieve: “Everything was ruined by the floods and rain.”

“271 gifts worths VND1 million ($43.50) each were sent by Sao Do Group to 16 families with extremely difficult circumstances, 40 gifts for dialysis patients at Vietnam-Cuba-Dong Hoi Hospital, and 215 gifts for other families in difficulties. They are nothing compared to the loss of the people here but we hope it will contribute to sharing and alleviating their difficulties,” Phuong shared.

In Quang Binh, Sao Do Group also supported a clean water project in Huu Tan commune, Quang Ninh district worth VND80 million ($3,480) to invest in a water filtration system for the hamlet of more than 225 households.

From Quang Binh, the delegation continued on to Ha Tinh to present 211 gifts, worth VND1 million each.

This is the mindset of the leaders of Sao Do Group in taking responsibility for society. Throughout its operation, many meaningful and practical activities have supported the community, through humanitarian blood donation events; supporting social work in Haiphong; and holding a porridge distribution programme for patients with serious diseases at Viet Tiep Hospital.

In June 2019, Sao Do Investment Group cooperated with the Trade Union of Haiphong Economic Zone to distribute porridge for poor patients at Haiphong Viet Tiep Hospital.

More than 300 sets of TH True fresh milk and porridge have been hand-delivered to patients with serious diseases at the oncology and hemodialysis departments.

The porridge bowls offered patients not only full nutrition but also love and compassion in difficult circumstances, helping them to be more motivated and more optimistic in their life.

More than 300 bowls of porridge were handed out to patients. When patients were unable to stand up and receive their porridge, members of Sao Do Group brought it to their rooms to relieve some of the fatigue and difficulties that the patients were going through.

Previously, in May 2019, Sao Do Group cooperated with the Blood Transfusion Center of Viet Tiep Hospital to organise the “Red Journey connecting Vietnamese blood” event. This event has received a great response from the group’s employees and member companies.

Also in 2019, the football field of Dong Hai 2 Primary School in Hai An district, Haiphong city was completed, with nearly VND200 million ($8,700) sponsorship from Sao Do Group. Since then, the field has been a safe and clean outdoor space for the students. The scene of the old, muddy yard that was unusable throughout the rainy season was replaced with a green and modern play space.

“Sao Do Group will make more efforts to share and contribute to the community. Vulnerable people such as children, women, the elderly, or the poor are going to become the top priority in our social responsibility initiatives,” Phuong affirmed.

Cho Ray Hospital in Ho Chi Minh City was recently selected by the International Society of Nephrology (ISN) as one of the newly-recognized ISN Regional Training Centers (RTC) for a five-year renewable period.

The official certificate of recognition was issued to Cho Ray Hospital by the Brussels-based association on Monday and is effective from now to 2026.

These centers were selected by the ISN Core Programs Committee as an institution of excellence in low and middle-income countries to provide training in nephrology, or the study of kidney function, to local doctors and health professionals from nearby low-resource areas through ISN grants.

They will also serve as a hub for ISN kidney care initiatives within an ISN region and facilitate locally-relevant research and advocacy strategies.

In addition, RTCs will provide up to twelve months of training in the nephrology areas of general nephrology, hemodialysis, peritoneal dialysis, transplantation, and pediatric nephrology.

Healthcare centers and medical establishments around the world can apply for recognition as ISN RTCs.

Cho Ray and a hospital each in Malaysia and Thailand join a list of 21 medical centers globally.

According to the ISN, regional training centers play an important role in its efforts to improve the treatment of kidney diseases in developing countries.

It is done in various ways like training medical students and health professionals, organizing training workshops on topics relevant to the regional situation and sharing expertise.

The five-year accreditation will be renewed if the healthcare centers continue to satisfy ISN’s criteria.

The hospital will become a training center in nephrology (the study of kidneys) over a five-year period to 2026, and that status will be maintained if it fulfils ISN’s criteria.

Cho Ray will provide in-depth specialized training to improve patient care in Vietnam and other countries in the region in the fields of general nephrology, hemodialysis, peritoneal dialysis, and transplants.

Training activities will be in the form of hosting fellows and educational meetings and workshops on regionally relevant topics, and sharing knowledge and expertise via the ISN Educational Ambassadors of Continuing Medical Education program, among others.

A regional training center, sellected by ISN, plays an important role in improving the treatment of kidney diseases in developing countries.

Cho Ray Hospital in Ho Chi Minh City (HCM City) has been sellected to be a regional training center of the International Society of Nephrology (ISN) in Southeast Asia in a five-year term.

Along with two training centers in Malaysia and Thailand, Cho Ray Hospital is the third unit named in the ISN’s list of 21 medical centers globally.

The training will focus on building capacity for medical students and health professionals, organizing training workshops on topics relevant to the regional situation and sharing expertise.

The five-year accreditation will be renewed if the healthcare center continues to satisfy the ISN’s criteria.

According to the ISN, regional training centers play an important role in its efforts to improve the treatment of kidney diseases in developing countries.

The ISN, based in Brussels (Belgium), picks the best medical facilities in low- and middle-income countries to provide training in nephrology, including general nephrology, hemodialysis, peritoneal dialysis, and kidney transplantation.

The ISN is a global professional association dedicated to advancing kidney health worldwide through education, grants, research, and advocacy.

Through its members and in collaboration with national and regional societies, the ISN engages 30,000 health professionals from across the globe to reduce the burden of kidney diseases and provide optimal health care for patients.

The ISN advocates closing the gaps in available care and promoting kidney health in the international health policy agenda through collaboration with global partners.

With the support of a wide range of partnerships, the ISN has developed a set of core grant programs enabling nephrologists around the world to access or contribute to education, training, as well as partnerships that help improve nephrology care in low and middle-income countries to reduce the impact of kidney disease worldwide.