The Hanoitimes – Hanoi targets to take its GDP per capita to a high income level 2030.

Hanoi should work to reach a higher status that is no longer of national level but regional one, Vietnam’s Prime Minister Nguyen Xuan Phuc has said.

With a millennial history, Hanoi should be positioned as one of political, economic, and cultural hubs in Southeast Asia by 2045, PM Phuc said at the “Hanoi 2020 – Investment and Development Cooperation” conference on June 27. This was the fourth hosting of such an event by Hanoi with the aim of boosting investment in the city.

“Hanoi should not set a goal to compete with national cities but regional ones like Bangkok, Kuala Lumpur or Shanghai,” the PM said at the event attended by roughly 1,800 guests who are ambassadors, international experts, foreign and domestic businesses, and local officials.

The old mindset in governance is no longer suitable for a dynamic city whose leaders are open to listening to people, tackling problems for businesses, and facilitating all economic sectors, said PM Phuc.

Hanoi, whose leaders are pioneering and enterprising, has built up a political system of integrity and taking action for both people and businesses.

In addition, it has been ranked a safe investment destination for domestic and foreign investors thanks to its stable political environment.

As a result, Hanoi has drawn a number of large foreign direct investment (FDI) projects by many multinational companies.

Speaking at the conference, PM Phuc said there are three main factors that Hanoi needs to take into account for its growth path.

Firstly, well-stipulated regulatory framework should come the first and foremost for Hanoi to offer opportunities to investors and open new markets for the city itself.

Secondly, the geographical position is one of Hanoi’s strengths to link to other localities and form an area of cooperation with larger chains of supply, production, and distribution.

Thirdly, good human resources would be very important for the city’s development. Good businesses, wealthy people, and competent individuals are encouraged to trust in the local government.

With the aforementioned reasons, Hanoi should have a green, clean, and livable environment with lots of energy. Startups and digital economy are listed among the city’s key goals, the PM suggested. 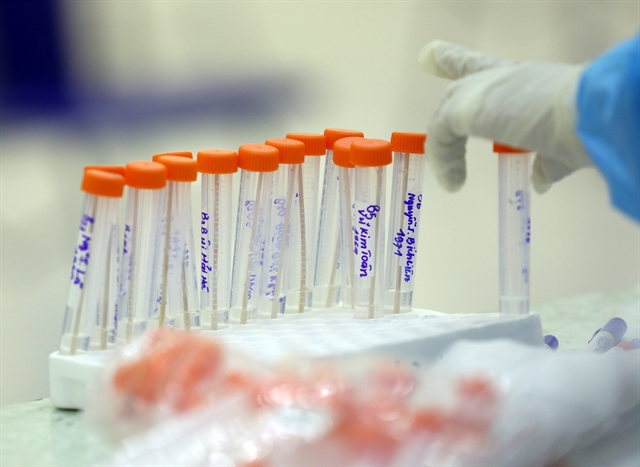 Samples collected from people returning to Hà Nội from outbreak-hit areas to be tested for COVID-19. — VNA/VNS Photo Huy Hùng

HÀ NỘI — A COVID-19 patient in Hà Nội has tested positive for the coronavirus again after being given the all-clear in late February, health authorities announced Tuesday.

N.T.K, Việt Nam’s COVID-19 Patient No. 1,958, reported on February 5, residing in Cầu Giấy District, was discharged from hospital on February 27 but after two days of the mandatory 14-day home isolation, she tested positive for the virus on March 1.

Health authorities noted that these re-positive cases recorded post-discharge usually do not cause risks of spreading the virus to the community, even among close family members.

This is the second such case in the city in its latest community outbreak, with the first being reported on February 25.

According to Deputy Director of the municipal Department of Health Hoàng Đức Hạnh, Hà Nội recorded no new local transmissions from February 16 to March 2.

The city’s authorities continue to collect samples from people arriving in the capital and those returning from outbreak-hit regions to test for COVID-19. — VNS

HCMC – A 48-year-old woman in Hanoi who had recovered from Covid-19 has tested positive again, according to Khong Minh Tuan, deputy director of the Hanoi Center for Disease Control and Prevention.

The patient, who resides in the capital city’s Dich Vong Hau Ward, Cau Giay District, is the wife of the 1,866th Covid-19 patient.

The woman was identified as the country’s 1,958th Covid-19 patient and was discharged from the hospital on February 27. She was self-quarantined at home until she tested positive for Covid-19 again.

Earlier on February 24, another woman who also lives in Cau Giay District tested positive for Covid-19 again after her treatment from January 30 to February 20.

Up to now, Vietnam has reported many recovered coronavirus patients testing positive again, but none of them caused community transmission after recovery. 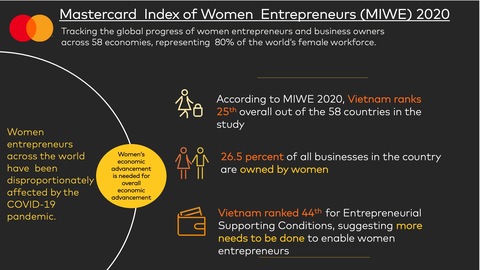 Dropping seven places since 2019, Viet Nam comes in at #25 while Thailand, Philippines and Indone sia are amongst the top 20 economies globally offering the most supportive entrepreneurial conditions for women.— Infographic by Mastercard

Women across the world have been disproportionally impacted by the COVID-19 pandemic – a staggering 87 per cent of women business owners say they have been adversely affected, according to Mastercard’s report of the Women Entrepreneurs Index 2020.

Overrepresentation in sectors hardest hit by the economic downturn (such as tourism, retail and F&B), the pronounced digital gender gap in an increasingly virtual world, and the mounting pressures of childcare responsibilities are only a few factors that have left women particularly vulnerable, particularly in economies such as Viet Nam, South Korea and Thailand.

MIWE 2020’s top performing economy is a prime example of gender-specific support mechanisms having swift and significant results. For the first time, Israel tops the MIWE as best economy for women entrepreneurs worldwide, advancing from 4th place in 2019. With an ambition to double the number of female entrepreneurs within two years, Israel’s success has been driven by a focused institutional backing for SMEs – its ‘Support for SMEs’ ranking catapulted from 42nd place in 2019, to 1st in 2020.

Last year’s strong performers, the United States and New Zealand – although dropping from 1st to 2nd, and 2nd to 4th places respectively – demonstrate that economies with mature gender focused initiatives still out-perform on the global stage through continued focus on advancing conditions for women in business. In both these economies, favourable cultural perceptions of entrepreneurism, the high visibility of female leaders that serve as role models for aspiring entrepreneurs and supportive entrepreneurial conditions play a crucial role in their success.

It is noteworthy that the majority of economies (34 out of a total of 58 in this report) have healthy MIWE scores of 60 to 70 such as Australia, Indonesia, Mainland China, Singapore, Viet Nam (63.87) and Malaysia while 13 economies have lower scores of 50 to 60 such as Japan and India.

Women in Asia Pacific continue to make admirable progress in the business world. The Philippines, Thailand, Viet Nam, and New Zealand ranked at #2, #6, #9 and #10 respectively for “Women’s Advancement Outcomes” which measures progress and degree of marginalisation economically and professionally as businesses leaders, professionals, entrepreneurs and labour force participants.

“What the findings make clear is that regardless of an economy’s wealth, level of development, size, and geographic location, gender inequalities continue to persist – even pre-pandemic. What COVID-19 did is that it exacerbated an already problematic situation. It disproportionately disrupted women’s lives and livelihoods to a greater extent than men due to a few pre-existing factors: the jobs and sectors women tend to work in, childcare and domestic responsibilities and the pre-existing gender disparity in business,” said Julienne Loh, Executive Vice President, Enterprise Partnerships, Asia Pacific, Mastercard.

“Yet, through the pandemic we’ve seen women’s strength and endurance in the face of adversity. If anything, this year has illuminated how vast women’s potential really is. But this moment in time is fragile unless governments, financial services and business organisations come together to do three things: offer systemic support and programmes to enable women to survive and thrive in this new normal, equip them with skills to navigate the digital world, and nurture an equitable, accessible financial services system that supports women’s work and entrepreneurship. These are not easy to deliver, but investments like these can yield priceless dividends for not only women, but society as a whole,” said Loh. — VNS

The next-generation of billionaires’ families own trillions of dong worth of stocks and run large businesses. 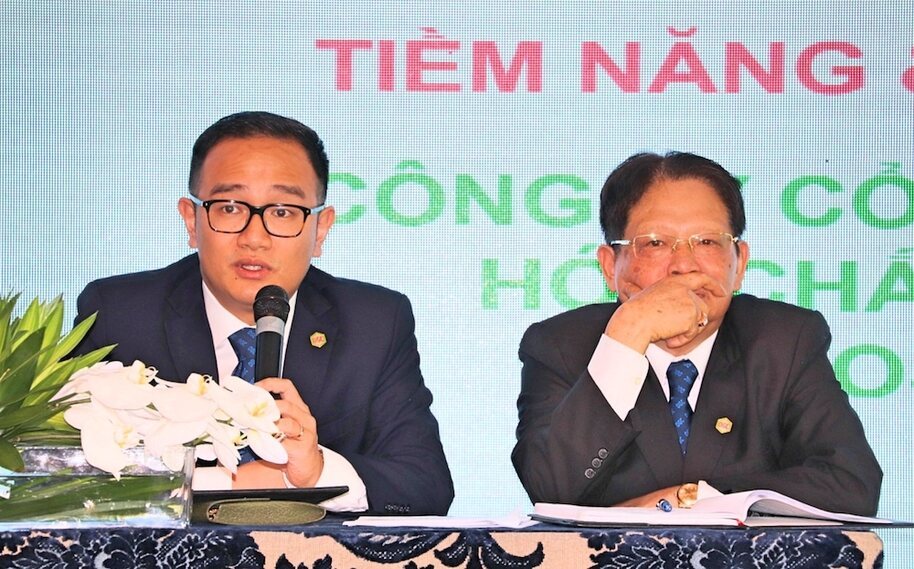 The successor of Duc Giang Chemicals

Do Huu Duy Anh works for his family-run company, Duc Giang Chemicals Group JSC. Before studying abroad, Anh was sent by his father to the factory in Long Bien district in Hanoi to work as a construction worker. Returning to Vietnam, he became the assistant to the CEO and two years later became deputy CEO of the company at the age of 25.

He took the office as CEO of Duc Giang six years later. Now Anh, 33, holds VND300 billion worth of shares.

Anh said it is unreasonable to consider Duc Giang a family-run company, because it lists shares on the bourse. Only the president and CEO are family members, while factory directors are not.

The son of US dollar female billionaire

In 2019, Tommy Nguyen, the son of Nguyen Thi Phuong Thao, the only female billionaire in Vietnam, became the co-founder of Swift 247, a technology startup operating in the field of logistics and forwarding.

When he was at school, he decided to ‘do something different’ regarding the mode of transport in the Vietnamese market. He found that Prime Amazon could ship goods in 29 states in the US within two days, while there were many problems in logistics services in Vietnam and Asia in the context of the e-commerce boom. That was why his startup was established.

In September 2020, Vietjet announced the restructuring and development of cargo transport by air using digital technology and e-commerce via an M&A between Vietjetair Cargo and Swift247.

In November 2020, Swift247 changed its business registration with charter capital of VND47 billion. The company shifted from a limited company into a joint stock company. Vietjet is the shareholder with controlling stake (67 percent of capital).

ACB shares have seen prices increase by VND4,300 per share, or 16.04 percent, since early February. With the share price increase, the stock assets of Tran Hung Huy, chair of ACB, and his family members, have increased sharply.

After the trading session on February 20, the assets of Kien and his wife increased by VND137 billion and by VND301 billion, respectively, compared with early February, to VND2.193 trillion.

Meanwhile, the assets of Tran Hung Huy and his family members increased by VND371 billion on February 19 and by VND818.2 billion, respectively, compared with early February. Boss Hien’s son

Do Vinh Quang, born in 1995, is the son of Do Quang Hien, who is chair of the board of directors of Trang Thi Trade and Service. He has been in this post since November 2020.

After becoming chair of the board of directors, the company organized an extraordinary shareholders’ meeting on the issuance of 40.5 million shares to existing shareholders at VND30,000 per share.

The issuance will be implemented in first and second quarter after which the company’s charter capital will rise from VND135 billion to VND540 billion.

The capital to be mobilized from the bond issuance, about VND1.215 trillion, will be used to develop business activities, increase working capital, contribute capital and buy into other legal entities, develop real estate projects, and expand business scale and business fields.

Hoa Sen Group of Le Phuoc Vu has announced information related to the delay of a plan to buy 22 million treasury stocks and sell all the treasury stocks it had bought prior to January 1, 2021.

HSG share prices have increased sharply, now hovering around VND25,000 per share. HSG value has increased by five times compared with one year ago and has brought VND9 trillion more to shareholders.

Members of the VWU, women of all ages will be encouraged to wear Ao Dai at working places, schools, and during events and activities, in accordance with the context of the Covid-19 pandemic so as to promote the beautiful images of Ao Dai and Vietnamese women.

Last year, a series of “Ao Dai-Vietnam’s cultural heritage” events organized by the Vietnam Women’s Union in collaboration with the Ministry of Culture, Sports and Tourism had positive impacts on the community, contributing to arousing the pride of and raising the responsibility of the young generation for preserving and promoting the national traditional costume.