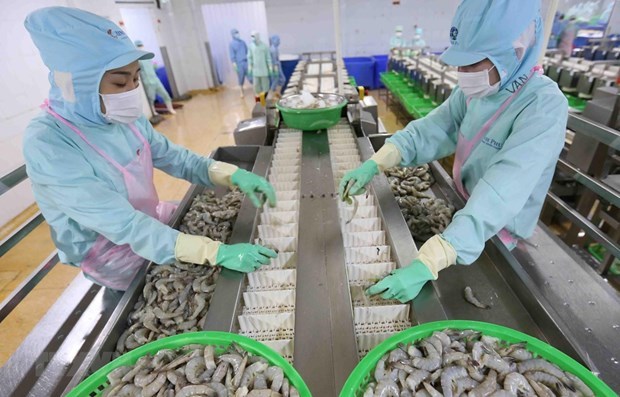 HCM City (VNA) – Ho Chi Minh City ’s Department of Industry and Trade has set the target to export 48.19 billion USD worth of products in 2021, a year-on-year surge of 10 percent.

Under its development plan for 2021 recently submitted to the municipal People’s Committee, the sector said import revenue is estimated at 56.47 billion USD for the whole year, up 11 percent against the previous year.

Besides, it eyed to reel in more than 835.68 trillion VND (36.29 billion USD) from retail sales and services revenues in the year, up 10 percent year-on-year.

The department said it will carry out necessary measures in a comprehensive fashion to branch out industry and trade, contributing to promoting economic recovery of the southern hub.

Earlier, HCM City set a goal of boosting the export of its key products this year and beyond via trade promotion activities and assistance to enterprises.

Head of the statistics office Huynh Van Hung said COVID-19 has been largely brought under control around Vietnam, resulting in the production sector exhibiting signs of recovery. Local enterprises, however, continue to face difficulties as many major trading nations are yet to open their markets.

He noted that enterprises are in need of diverse and long-term support relating to information on importers of materials and fuel, new markets and partners, and domestic consumption stimulus measures.

Key export markets remained China, the US, and Japan. China imported 10.5 billion USD worth of goods from HCM City last year, up 23.7 percent year-on-year. Exports to the US and Japan, meanwhile, stood at 6.7 billion USD and 2.8 billion USD, down 0.2 and 16 percent, respectively, year-on-year./. 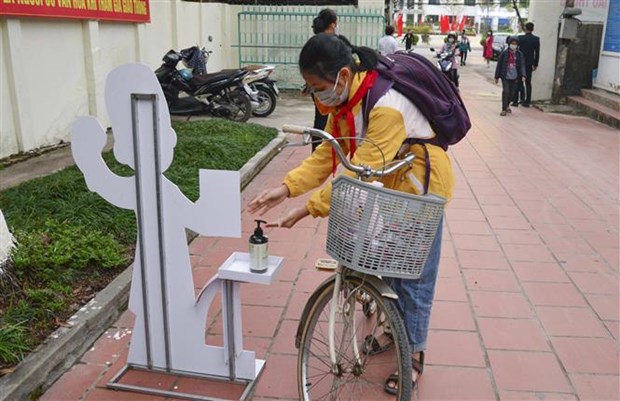 The Ministry of Education and Training has requested local departments of education and training and educational institutions nationwide to strictly implement COVID-19 prevention and control measures, especially when students come back to school.

Schools are urged to stay vigilant against the pandemic, and proactively carry out prevention and control measures to ensure safety for students, with the focus on disinfecting classes, teaching and learning tools and toys. 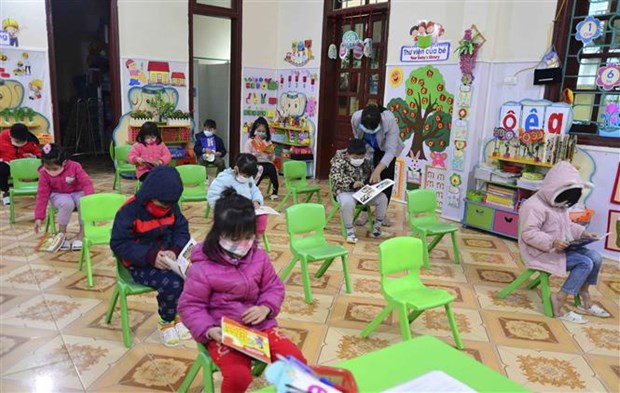 Schools are also requested to coordinate with parents to keep a close watch on students’ health while they are at home and at school.

The Ministry of Education and Training also asked schools to actively build study plans for students to ensure the quality of their study after a long holiday./. 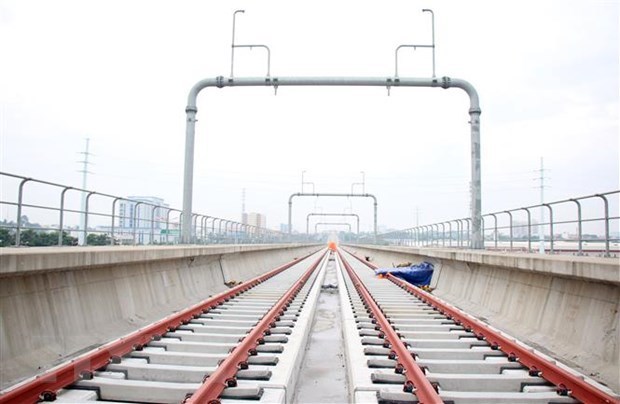 The track of Metro Line No. 1, from Ben Thanh Market to Suoi Tien Theme Park, in HCM City (Photo: VNA)

HCM City (VNA) – The Export-Import Bank of the Republic of Korea (KEXIM) has asked Ho Chi Minh City ’s authorities for permission to conduct an investment study for Phase 2 of Metro Line No. 5 , set to be carried out in the public-private partnership (PPP) format.

In its letter sent to the Chairman of the municipal People’s Committee and the city’s Management Authority for Urban Railways (MAUR), KEXIM said it will soon provide funding for the update of the project’s pre-feasibility study, which covers technical, financial, and legal aspects, according to the MAUR.

The bank noted that members of the research group and participating investors have experience in building and operating urban railway routes, including Metro Line No. 9 of the RoK’s Seoul capital, in the PPP format.

The MAUR said it had a working session on January 19 with some investors and consultancies from the RoK to discuss the study and related orientations for the project.

The Korean side, including KEXIM and some businesses and consultancies, presented the plan to update the pre-feasibility study, whose final version is expected to be submitted by the end of 2021.

The pre-feasibility study for Phase 2 of Metro Line No. 5 was previously financed by the Korea International Cooperation Agency (KOICA). However, due to certain objective reasons, the project was unable to be funded through official development assistance (ODA) loans, but the PPP format.

The first one, from the Bay Hien intersection to Sai Gon Bridge, is about 8.8km long and invested with around 1.66 billion USD. It is funded with ODA capital from the Spanish Government, the Asian Development Bank (ADB), the European Investment Bank (EIB), and the German development bank KfW.

A passenger bus caught fire in the An Suong tunnel in HCM City this morning.

The incident occured at around 6.30am on February 24.

The driver of the bus No. 51B-206.78 noticed some smoke coming out of the front part of the vehicles when it was entering An Suong underpass.

He stopped the bus and asked the passengers to get off the vehicle. The fire quickly spread and the whole bus caught on fire.

Firefighters took about 15 minutes to put out the fire. Investigation of the accident is underway.

Fortunately no one was injured in the incident.

Some photos taken at the site: 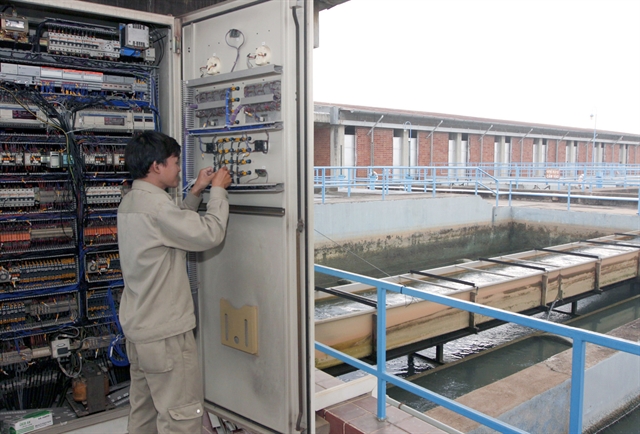 HCM CITY — HCM City authorities have pledged to continue to carry out “drastic” measures to prevent water pollution, groundwater exploitation and lack of clean water for local use.

“Clean, safe water will continue to be supplied to all city households in every district,” the People’s Committee said.

The municipal government recently approved a master plan on water supply in the 2020-2050 period, and another on clean water supply and ending the exploitation of underground water by 2030.

Under the master plan, the city will strive to meet water demand in the 2020 – 2050 period, between 5 – 10 per cent lower or higher than the total forecasted demand.

By 2025 the city plans to ensure that every resident has access to tap water.

Under the plan, the municipal water supply capacity will reach 3.6 million cubic metres per day, using only 100,000cu.m of groundwater by 2030.

From 2030 to 2050, the supply capacity will increase an additional 2.4 million cubic metres a day.

The city is also gradually relocating its water supply sources further upstream of the Sài Gòn and Đồng Nai rivers to ensure clean water for local use.

The city will build reservoirs to store water for treatment to combat salinity caused by the impact of climate change and the pollution of water sources from regional socio-economic activities.

The city will also upgrade more than 1,430km of old pipelines and install more new pipelines by 2025.

It targets lowering water losses to 15 per cent.

In addition, the city will continue to develop a smart water supply system and carry out a pilot project to install drinking water taps in public areas such as parks, schools and hospitals.

According to the Department of Natural Resources and Environment, water in downstream Sài Gòn River is suffering from severe microbiological pollution and slight oil contamination.

Pollution indicators like ammonia, microorganisms and manganese have all increased, exceeding the permitted standards of Việt Nam and the World Health Organization.

Dr. Hồ Long Phi, director of the Centre for Water Management and Climate Change under the National University of HCM City, said that pollution in the Saigon River has become more serious.

He said the city would need a huge investment in building new pumping stations with extremely large capacity of millions of cubic metres a day, as well as investment in long and large-scale pipelines.

Experts have warned that rapid urbanisation has put pressure on the city’s water infrastructure, which is ageing. It is a great challenge for the city to maintain water supply and keep pace with economic growth.

In addition, the city plans to reduce the exploitation of groundwater by 2025 to prevent land subsidence and protect residents’ health.

More than 700,000cu.m of groundwater are being exploited daily in the city. Half of the total serves households, while the rest is for manufacturing activities.

Water samples collected from wells in the city have recently showed concentrations of iron, pH, E.coli bacteria and ammonia that failed to meet standards set by the Ministry of Health, according to a recent Preventive Health Centre investigation. — VNS 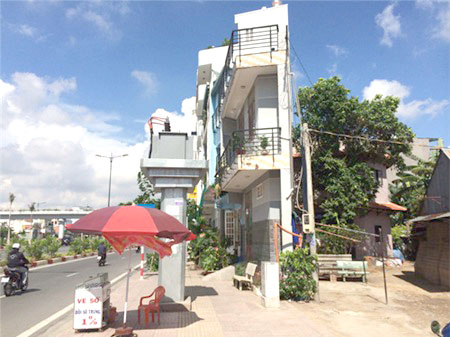 An oddly-shaped tiny house on Phạm Văn Đồng Street in HCM City’s Bình Thạnh District. The city government has approved a proposal to reclaim land along new road expansion projects as part of its effort to stop the construction of tiny houses. — VNA/VNS Photo Mạnh Linh

HCM CITY — Land along new road projects in HCM City will be reclaimed for auction and resettlement as part of the city’s effort to get rid of or reduce the number of oddly-shaped tiny houses that have appeared as a result of road-expansion projects.

Dealing with super-small and skinny houses has been a problem for years, according to the city Department of Construction. Many houses have been built in tiny or oddly shaped land areas, especially along newly expanded roads, destroying the urban landscape.

Districts which have seen the construction of many tiny houses include 5, 6, 11, Bình Thạnh, Tân Phú and Tân Bình.

The city has more than 1,000 oddly shaped tiny houses as result of road expansion projects.

On Cách Mạnh Tháng Tám Street (Tân Bình District) where construction of Metro Line 2 has begun, some 86 houses are sub-standard, accounting for 23 per cent of the total affected houses near the subway line, mostly near the Bảy Hiền intersection.

One owner of a tiny house on the street, who did not want to be named, said after site clearance was issued to expand the road, his remaining land was only 12sq.m. But it was street-side, which is considered more valuable, and he is now selling it at VNĐ4.5 billion (nearly US$200,000).

“Despite the tiny area, you can open a take-away coffee shop, lottery ticket agent or just hang up signboards,” said the owner, who said the price was still affordable.

The price of such houses in a nearby area is at least VNĐ300 million per square metre, according to local media reports.

For example, after 80 per cent of area of a house is cleared, the remaining 20 per cent is often built with higher floors, making the house look strangely skinny.

District authorities have encouraged house owners to sell the remaining area to the owner of adjacent houses at the market price in order to form a new “normally sized house”, according to Thuận.

Experts attributed the problem to planning management. Planners did not pay adequate attention to remaining areas of many land plots after site clearance, resulting in the creation of many plots that were too small or out of shape.

Combining the parcels of tiny land with neighbouring plots, however, can be difficult because of challenges in reaching agreement about prices as most tiny houses are street-side with very high prices.

Architect Ngô Viết Nam Sơn said: “HCM City must address this problem beginning at the planning stage so that there will not be any super-thin houses.”

Residents whose land was taken back in the past have not benefited from these road expansion projects, while those who were not affected by the projects benefited hugely from land price spikes.

To tackle the issue, city authorities have approved a proposal to reclaim land along new road projects in the city for auction and resettlement areas for affected households.

Under the proposal by the city Department of Natural Resources and Environment, people whose land is taken back will be resettled in the same locations but with smaller lots than their own.

The surplus land will be put up for auction to raise capital for the road projects.

The local authorities will negotiate with the affected residents. If two-thirds of the residents agree to the land reclamation plan, it will then be put into force.

Experts have also recommended that land areas ineligible for construction permits must be combined with a neighbouring plot.

The People’s Committee will report to the People’s Council and then to the Prime Minister to help settle the issues. — VNS