Photo Hanoi’21 is a project initiated by the French Institute in Hanoi . The project allows the audience to appreciate hundreds of photos from international photographers with just a click of their mouse.

Three exhibitions are now open under the project.

The first is “ The Mekong – Stories of Man ” by Vietnamese-French photographer Lam Duc Hien, who was born and raised on the banks of the Mekong River in Laos.

Hien captured his 4,200-km journey along the Mekong in hundreds of photos on display at the French Institute until September 12 and available for viewing online.

The two other exhibitions are “The time has come to rekindle the stars” by Punk Dragon and “Secret moments of maikos” by Philippe Marinig.

Both are physically on display at the Japan Foundation Centre for Cultural Exchange in Hanoi’s Hoan Kiem district as well as online.

Photo Hanoi’21 was introduced in late April to satiate the needs of art lovers as the pandemic continues to make its presence felt./. 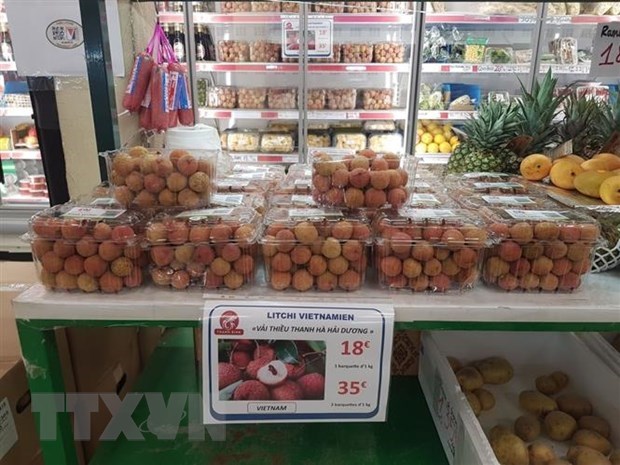 Another batch of ‘thieu’ lychee from Hai Duong province will be shipped to France this week thanks to swift consumption of the fruit in the market. (Photo: VNA)

Hanoi (VNA) – Another batch of ‘thieu’ lychee from the northern province of Hai Duong will be shipped to France this week thanks to swift consumption of the fruit in the European country .

As the French side decided to speed up import procedures ahead of schedule to meet local demand, two batches containing nearly 1 tonne of lychees each have been flown to France within just one week.

Labelled with Vietnam’s itrace247 origin tracing stamp, the first batch was shipped thanks to trade promotion efforts by the Vietnam Trade Office in France and the Trade Promotion Agency (Viettrade) at the Ministry of Industry and Trade, following a series of business matching sessions involving Hai Duong lychees.

Vu Anh Son, head of the office, said that France consumers attach importance to food origin labels to ensure quality and responsibilities of growers and distributors.

The shipment of the fruit demonstrates a strategic and responsible export policy of the Vietnam ese Government, he noted.

On June 12, an about-1-tonne batch of ‘thieu’ lychee grown in Hai Duong arrived at the Paris Charles de Gaulle Airport in France. It was available at the prestigious Asia supermarket chain in Paris and strongly favoured by local consumers.

Before the arrival of the batch, the Vietnamese fruit was imported in a small amount and made almost no appearance at big local shopping malls.

To further promote the consumption of Vietnamese lychees in France, the trade office and the Embassy of Vietnam will set up a booth dedicated to the fruit at the 2021 Vietnamese Food Festival, which is slated for June 19 in downtown Paris.

Viettrade and the trade office in France are seeking more import partners and firms in Vietnam meeting requirements of the European market, in an endeavour to bolster export of agricultural products at large and lychees in particular, thereby optimising advantages from the EU-Vietnam Free Trade Agreement./.