Hanoi is ready to restart and accelerate socio-economic activities as the Covid-19 situation in the city has been put under control.

“The priority in March is to strictly comply with anti-Covid-19 measures and boost socio-economic development,” Ngoc Anh said.Chairman of the Hanoi People’s Committee Chu Ngoc Anh gave the remarks at the city’s monthly meeting on March 4.

“Hanoi aims to create a favorable business environment to further attract investment capital, along with more support to spur the growth of the private sector and pubic investment,” he noted.

As public investment continues to be a key solution to aid economic recovery this year, Ngoc Anh urged local authorities to closely monitor the progress of public projects and those financed by ODA funds.

Hanoi’s economic performance in the first two months stayed positive with the Index of Industrial Production (IIP) expanding by 7.5% year-on-year, higher than the 5.8% rate recorded in the same period last year.

The city’s trade turnover also witnessed strong recovery as exports in the two-month period reached US$2.3 billion, up 12.7% year-on-year, staying in stark contrast with a contraction of 19% in first two months of last year.

Foreign direct investment (FDI) commitments to Hanoi in the year to February 23 hit US$58.9 million. The investors registered to pour US$14 million into 28 fresh projects, and an additional US$4.1 million into nine existing projects. They have also injected US$40.8 million to acquire stakes or contribute capital in local companies. 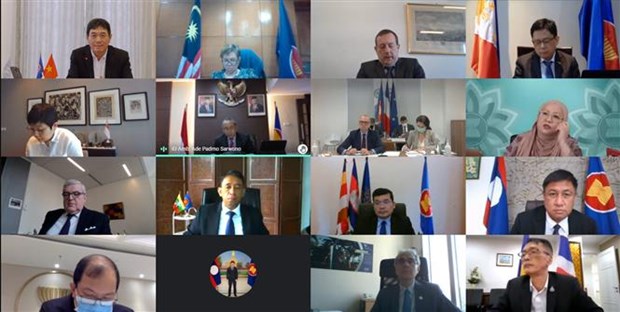 At the meeting (Photo: VNA)

The Vietnamese delegation was led by Vietnam’s representative to the ASEAN Ambassador Nguyen Hai Bang.

At the meeting, the French side affirmed that France treasures cooperation with ASEAN, underlining that the organisation plays a significant role in maintaining political and economic stability in the region, and voicing a hope to further participate in ASEAN-led processes.

France affirmed it will support the building of the ASEAN Community and implementation of the 2025 Vision, priorities in the ASEAN Comprehensive Recovery Framework, the Master Plan on ASEAN Connectivity (MPAC) 2025), and the Initiative for ASEAN Integration (IAI) Work Plan IV (2021 -2025); while actively contributing to maintaining peace, stability and development in Asia-Pacific and the world.

For their part, ASEAN representatives welcomed and highly valued that France has become a Development Partner of ASEAN.

They expressed gratitude to France’s assistance for ASEAN members through the Agence Française de Développement (AFD) over the past 25 years, especially in the fields of regional economic integration, education, environment and climate change, and institutional enhancement/capacity building.

Regarding future cooperation, the two sides agreed to foster practical collaboration in spheres of mutual interest, and identify and focus on some prioritised fields at present.

Of note, they consented to compile the Practical Cooperation Areas (PCA) for 2022-26, which serves as the basis for effective implementation of cooperation activities between ASEAN and France in the coming time.

As a member of the European Union, France takes part in and supports the ASEAN-EU dialogue partnership, while paying attention to bolstering its direct relations with ASEAN, the country’s representative said.

France was recognised as a Development Partner of ASEAN during the 53rd ASEAN Foreign Ministers’ Meeting hosted by Vietnam last September, marking a new step forward in the bilateral ties and paving the way for new cooperation chances.

With the first loan agreement, ADB provides US$20 million from its Asian Development Fund (ADF) to fund the Public Private Partnership Support Project. The project will use the fund to establish a Project Development Facility (PDF) to help bring efficient PPP projects to the market. Ministries and government agencies will use the PDF to fund PPP project preparation activities, including pre-feasibility studies, full feasibility studies and the engaging of transaction advisors to structure deals to bring to the private sector for bidding.

The second loan of US$130 million will help transform the GMS corridor towns of Dong Ha, Lao Bao and Moc Bai into economic hubs by improving urban-environmental infrastructure and strengthening institutional capacities of provincial and local authorities. The GMS Corridor Towns Development Project will finance 10 sub-projects in the three towns.

To help Vietnam improve food safety, ADB provides $11 million in ADF loans to finance the Trade Facilitation, “Improved Sanitary and Phytosanitary Handling in GMS Trade Project”. The project will support the country to establish, strengthen and implement surveillance and inspection programs for food safety, including safe food handling in the tourism industry, and regional cooperation and harmonization of sanitary and phytosantary management in food trade in the GMS.

The final loan of US$ 15 million from ADF is to finance GMS Capacity Building for HIV/AIDS Prevention Project to address current gaps in effectively reaching high-risk and vulnerable populations in border areas along shared economic corridors with other GMS countries. The project helps the Government develop its national and regional capacity to mitigate HIV risks and vulnerability, primarily in 15 border provinces in Vietnam.

Addressing the ceremony, Tomoyuki Kimura, the ADB Country Director for Vietnam said that the provision of adequate physical infrastructure is a necessary condition to ensure the country’s economic growth and people’s access to services and opportunities. The challenge then is how to mobilize the financing needed to develop infrastructure, and clearly this will largely rely on encouraging more private sector investment, such as well placed public financing coupled with support to overcome policy, institutional, information and risk barriers to investment.”

According to Nguyen Xuan Cuong, Minister of Agriculture and Rural Development (MARD), the agriculture sector faced many difficulties and challenges caused by the Covid-19 pandemic, which directly affected production and export, import and consumption of agricultural products.

The combined efforts of the Party, the National Assembly, the Government, the Prime Minister, localities, the business community and farmers helped the agriculture and rural development sector realize dual goals, both increasing growth and effectively combating the pandemic.

In terms of cultivation, the crop structure was converted more efficiently by promoting intensive farming and application of advanced science and technology, especially for key crops, and controlling and increasing the use of new and high quality seed varieties. Rice production output reached 42.7 million tonnes, not only fully meeting the demand for domestic consumption but also meeting the needs of processing for animal feed and export. In particular, high-quality rice accounted for over 85 percent of exported rice, raising the average export price from US$440 per tonne in 2019 to US$496 in 2020.

The year 2020 saw a restructuring of the agricultural sector, improved production scale and level and a strong shift to commodity production on the basis of each region’s advantages. Notably, the consumption market for agricultural, forestry and fishery products continued to develop, and the domestic market was expanded significantly.

Nine commodity groups maintained an export turnover of over US$1 billion, with five recording a turnover of over US$3 billion, including timber and wood products, shrimp, vegetables, cashew nuts and rice. Progress was also reported in the national program on new rural construction. So far, 173 district-level units in 50 provinces and cities under the central government, an increase of 61 district-level units compared to the end of 2019, and three provinces including Nam Dinh, Dong Nai and Hung Yen have been recognized for completing the task of building a new countryside. Nine other provinces and cities are completing procedures to be recognized as completing the task.

The Prime Minister also pointed out shortcomings, chief among them limited sustainability of agricultural sector growth due to inadequate infrastructure, small-scale production and fierce international competition. He referred to the continued gap between the rich and the poor, especially in the construction of a new countryside.

The Prime Minister urged the MARD to seize the opportunities provided by the major trade agreements Vietnam has signed. He also called on the ministry to remove the institutional barriers for the agricultural sector, first of all on the Land Law, and continue to find markets to stabilize sales.

In order to achieve the goals, the Prime Minister called for suitable mechanisms and policies to facilitate agricultural development and continue to improve the quality of agricultural restructuring associated with growth model innovation. At the same time, it is necessary to promote scientific and technological research, the application of high technologies and digital technologies, forming a smart agriculture, improving productivity, quality and value, he said.

Phuc also suggested that in 2021, the MARD strives to keep the sector’s GDP growth rate at about three percent, and the growth of agricultural, forestry and fishery production value at over three percent. Besides, the export value of agricultural, forest and aquatic products is projected to reach US$44 billion, forest coverage rate to remain at 42 percent. In particular, the country is striving to have 85 percent of its communes meeting new rural standards by 2025.

“Positive sentiments fuelled by the COVID-19 vaccination drive in the country and the impact of growth-promoting policies are expected to support the economic revival over the short to medium term,” the CBSL said in a statement.

“The Board noted the recent slowdown in credit disbursements to the private sector and inadequate lending to productive sectors of the economy, and stressed the need for the financial system to actively lend to productive sectors in order to support the ongoing recovery of domestic production-based economic activity,” a statement by the CBSL said.

The centre is designed to gather innovative domestic and international businesses and groups while providing laboratories, offices and workplaces for experts and scientists in order to help them develop and realise their technological initiatives in line with international standards.

It will also support and develops the nation’s start-ups and innovation ecosystems, contributing to growth models based on science and technology.

Previously, the Ministry of Planning and Investment launched a programme called Connecting Vietnam’s Innovation Network, which gathered hundreds of talented Vietnamese experts and scientists in the fields of science and technology from around the world.

To date, the network has attracted the participation of more than 1,000 overseas Vietnamese scientists and has established five offices in the US, Germany, Japan and Australia.

At the end of 2020, the Ministry of Planning and Investment launched a programme to support enterprises’ digital transformation in the 2021-2025 period.

The programme aims to support a minimum of 100 businesses to become exemplary digital transformation models and facilitate the establishment of a network of experts that includes at least 100 organisations and individuals offering solutions to promote digital transformation for businesses as well as supporting the development of digital platforms.

Starting from a backward economy, Vietnam rose into a lower middle-income country in 2009. However, the country’s technology, machinery, equipment, and production lines have not been improved and not many new economic models have been effectively applied and implemented, an issue which has resulted from limitations in technical infrastructure, insufficient awareness among localities and sectors about the role of science, technology and innovation, and inadequate allocation of investment resources.

Vietnam’s spending on science and technology development, in both the State and private sectors, continues to be very modest, accounting for just 0.44% of gross domestic product (GDP), much lower than the world average of 2.23%.

These weaknesses can be addressed once Vietnam is fully determined to seize the opportunities brought by the fourth Industrial Revolution.

The country’s determination was underlined in the Prime Minister’s Decision No.1269/QD-TTg on the launch of the National Innovation Centre. The document was promulgated to realise Politburo Resolution 52-NQ/TW which outlines policies guiding Vietnam’s active involvement in the revolution.

Several studies and reports on the impact of the COVID-19 pandemic on the Vietnamese economy have shown that the contribution of labour and capital to GDP growth will decline sharply in the next five years, thus, innovation and total factor productivity (TFP) will play a crucial role in maintaining economic growth. Therefore, innovation and the application of science and technology have now become a strategic breakthrough point for Vietnam to catch up with the rapid development of the world.