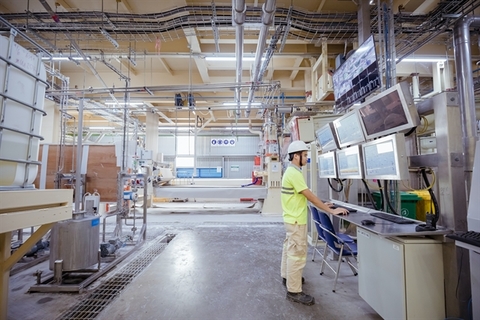 Thanks to the core components of the sheet applying technology from Europe – Activ Air, Vinh Tuong Super Guard proactively senses, detects and absorbs harmful gases in the house (Formaldehyde) then converts it into inert gas that does not affect health. This process is repeated continuously and lasts up to 50 years.

Certified by Eurofins Europe, the plasterboard ceiling has the ability to purify up to 85 per cent of the air, 5 per cent higher than the standards of European countries. Vinh Tuong Super Guard ceiling is produced at the company’s most modern factory in Southeast Asia in Thuy Nguyen District, Hai Phong City. — VNS

US Ambassador to Vietnam Daniel J. Kritenbrink believes that the most important values and products of the PCI are not the rankings of localities, but rather the sharing of the lessons learned, along with models and technology reforms.

The past 16 years has seen the PCI play an important role in promoting transparency and accountability in provincial economic governance domestically whilst facilitating private economic development as a means of promoting the nation’s competitiveness within the international arena.

Informal fees have continued to decline in recent years due to positive results achieved in the fight against corruption. In addition, both domestic and foreign investors are applying modern technologies as part of efforts to develop a greener, more stable economy, the diplomat states.

According to Ambassador Kritenbrink, the country has yielded several positive results due to improved administrative procedures, especially in terms of customs procedures. Vietnamese success in the fight against the novel coronavirus (COVID-19) pandemic has also had a positive impact on the local business climate in recent times.

Despite a high proportion of firms being negatively impacted by COVID-19 last year, Vietnamese businesses were largely able to continue their operations. Overall, the PCI underscores the success in the country’s economic development strategy based on FDI attraction and domestic private sector development.

Along with these remarkable results there remains a number of areas of major concern, such as corruption control, procedural systems, regulations, infrastructure, and quality public services.

Despite significant improvements occurring in these areas, last year saw only 27% of FDI enterprises rate the level of corruption in Vietnam as less common than in China, Thailand, Singapore, Indonesia, and Malaysia.

Furthermore, only 32% of FDI enterprises believe that the Vietnamese system of procedures, regulations, and infrastructure is better than that of these countries, while roughly 42% of them state that the quality of Vietnamese public service delivery is better.

These figures are largely in line with the judgment of the Korean Chamber of Business in Vietnam (KORCHAM), who say that infrastructure and regulatory systems are two areas in which the nation can further improve in to attract new investors moving forward.

Foreign financiers also expect that the country will continue controlling corruption, whilst simultaneously improving the quality of public service delivery, revamping procedures, and greatly upgrading the quality of infrastructure facilities.

The highlight of these events will be art shows, street parades, and a fireworks display which will be held welcome the start of the tourism season for this year.

Hoang Nhat Nam, director of the art programme held at the Tuan Chau international tourist site, said a number of popular local artists, singers, and beauty queens will participate in a grand music programme and fashion shows during the occasion.

As part of the event, Ha Long City have asked the authorities to permit firework displays to be held at three locations, including the Tuan Chau international tourism site, 30-10 Square, and the FLC Ha Long eco-tourism complex.

Most notably, a number of new tourism products have been put into operation ahead of the occasion, including the opening of the Tuan Chau golf course featuring a lighting system at night, the inauguration of Hon Gai public beach, and free entry to a tourist site in the Ba Deo hill area.

This comes as the number of tourists who have booked tours to Da Nang city for Reunification Day on April 30 and Labour Day on May 1 has recovered by approximately 80% compared to the same period from last year.

These are food items, daily necessities, and cosmetics originating from Japan that are highly appreciated by Vietnamese consumers, e-commerce sites and retailers.

Up to 50% of Japanese businesses were connected by JETRO to display their products at this first event to get acquainted with the Vietnamese market.

Although the number of products sold in 2020 suffered a fall compared to the previous year, the total sales of these items surged by 5%. Cosmetics, basic necessities, especially Japanese foods are currently being consumed well in Vietnam.

Shinji Hirai notes that Vietnamese people’s interest in Japanese food is increasing and many Japanese businesses are pinning their high hope on the Vietnamese market. Therefore, the Japan Mall project and online platform BtoB “Japan Street” are focused on promoting development by JETRO in order to bring the above items to Vietnamese consumers.

Specifically, in Vietnam, the forerunner of the project started operation in 2016 and by 2020, 7 units including EC e-commerce sites and retailers participated in the project, including FamilyMart, Hachi Hachi , Kamereo.

In addition, JETRO has been operating the online platform “Japan Street” in early 2021, allowing to support the distribution of Japanese products throughout the year. Accordingly, there have been than 500 providers registered on the website and it is expected that the number will increase by many times in the time ahead.

“With the use of this platform, we will further promote the Japan Mall project via expanding and commercially distributing Japanese products into Vietnam,” says the JETRO chief representative.

Previously, Vietnam was mainly chosen by Japanese enterprises to be the production place of goods, but now it has become a consuming market for Japanese products. Notably Vietnam ranked 5th in the top 10 markets importing Japanese agro- forestry – fishery products with a turnover of JPY 53.5 billion in 2020, Shinji Hirai emphasizes.

Vietnam has set up marine protected areas as part of its efforts to sustainably develop fisheries resources and improve fishing traditions to protect aquatic environment in the country with more than 3,600 kilometers of coastline.

The ratio of marine protected areas (MPAs), which are essential for safeguarding biodiversity and the health of marine ecosystems, is around 0.185%, compared to 0.24% of the country’s sea given in the government’s Resolution 742/QĐ-TTg dated in 2010.

As of September 2020, MPAs cover 213,400 ha out of 270,271 ha set in the resolution, the information was released at a conference reviewing 10 years of protection and development of Vietnam’s marine resources by 2020 held last weekend by the Ministry of Agriculture and Rural Development (MARD).

Years ago, Vietnam was aware of the need to protect marine resources to tap potential of the country having more than one million square kilometers (sq.km) of sea as stated in the United Nations Convention on the Law of the Seas (UNCLOS) 1982.

Over the past decade, Vietnam has formed 16 marine protected areas (MPAs) to shield threatened marine ecosystems and other undersea resources from intrusive human activity.

Four others under planning include Hon Me in Thanh Hoa province, Nam Yet in Khanh Hoa, Phu Quy in Binh Thuan, and Hai Van – Son Tra in Danang city and Thua Thien-Hue province.

In 2017, the National Assembly passed Law on Fisheries that supplements the 2003 law with a focus on the protection and conservation of marine resources and biodiversity to ensure sustainable fishing industry.

The dialogue on IUU fishing between the EU and Vietnam started in September 2012. The Commission identified Vietnam as non-cooperating country (yellow card) on October 23, 2017 following Vietnam’s failure to address the structural deficiencies in its legal and administrative frameworks to fight IUU fishing that was identified during previous visits.

This yellow card only signals the formalization of the existing dialogue. The Commission continues cooperating with Vietnamese authorities to address the situation that led to the yellow card.