Five foreign people and four Vietnamese nationals who recently arrived in Vietnam from abroad have tested positive for SARS-CoV-2, raising the total number of patients in the country to 2,705, the Ministry of Health reported on Monday evening. According to the ministry’s report, five new foreign patients include three men and two women aged between 23-61 who are from India, Germany, Ukraine, Uzbekistan, and Moldova. They are now being treated at hospitals in Hanoi and Ho Chi Minh City.

Four Vietnamese patients including three women and a man aged between 21-29 who recently returned from Japan, Angola, South Korea, and Cambodia. They are now being treated at hospitals in Danang and Ho Chi Minh cities, and Bac Ninh, and Kien Giang provinces.


With these new infection cases, the number of Covid-19 patients in Vietnam has increased to 2,705, including 910 locally-transmitted cases reported since the new outbreak started in Hai Duong on January 28.

As of 6 pm on April 12, a total of 2,445 Covid-19 patients had recovered and been discharged from hospital. There have been 35 deaths, most of them being the elderly with serious underlying diseases.

At present, nearly 37,000 people who had close contact with Covid-19 patients or returned from virus-hit areas are being monitored at hospitals, quarantine facilities, and at home. 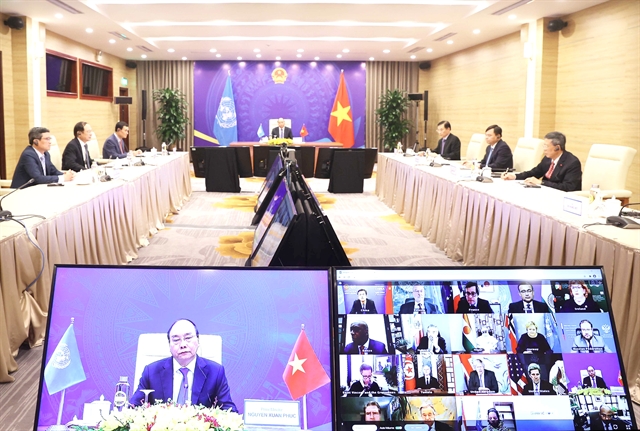 Then Prime Minister Nguyễn Xuân Phúc attended and delivered remarks at an open debate of the UN Security Council in addressing climate-related risks to international peace and security, which was held in the form of video conference on February 23, 2021. — VNA/VNS Photo

HÀ NỘI — Việt Nam for the second time assumed the role of rotating President of the United Nations Security Council (UNSC) for the 2020-2021 tenure this month, thus making a new and important imprint in the process of transforming from a participant to an active and proactive UN member.

VN grows up in UN

Thirty years after Việt Nam joined the UN on September 20, 1977, the country was elected for the first time as a non-permanent member of the UNSC for the 2008-2009 tenure in the first secret ballot round in October 2017, with 183 votes of approval out of 192 General Assembly members participating in the ballot, or 96 per cent.

During its first tenure at the UNSC – the UN’s most important body in maintaining international peace and security – Việt Nam and other UNSC member states handled a large workload with more than 1,500 meetings, passed 113 Resolutions and 165 Presidential Statements and Press Statements on 50 agenda items, and dealt with complex issues regarding Kosovo, Iran’s nuclear programme, and Middle East peace, as well as those relating to the Democratic People’s Republic of Korea and Myanmar.

Việt Nam made active and comprehensive contributions, from delivering speeches, participating in the making of resolutions and documents, assuming the posts of Chair or Vice Chair of several subcommittees, holding the post of UNSC President in July and October 2009, chairing negotiations for the council to approve Resolution No 1889 on women, peace, and security, and providing ideas to build the council’s Annual Report in a more practical and comprehensive manner.

“Việt Nam was on the UNSC 10 years ago in the 2008-2009 tenure,” said Kamal Malhotra, UN Resident Coordinator. “It played an important role, contributing to a resolution on women, peace, and security which I think was a landmark resolution in the UNSC. Việt Nam has also been increasing its role in global peacekeeping.”

The country’s election as a UNSC non-permanent member twice in just a short period was an important milestone in it transforming from a participant to an active and proactive member.

“This was the second time over the last more than 10 years that Việt Nam has been voted as a member of the UN body with a leading role in maintaining global peace and security, proving the international community’s recognition of its improving position as well as trust in its responsible contributions to regional and international peace and security in the coming years,” said then Prime Minister Nguyễn Xuân Phúc.

Joining the UNSC for the second time amid complex developments in the world, Việt Nam has effectively implemented activities relating to the UNSC, completed the heavy workload in the first year of the tenure, and created its own imprint at the UNSC.

The country has actively proposed initiatives and played a leading role in several important issues.

While holding the UNSC Presidency in January 2020, Việt Nam successfully chaired an open debate on upholding the UN Charter to maintain international peace and security, and the first-ever meeting on cooperation between the UN and ASEAN, which combined the country’s dual role as UNSC non-permanent member and ASEAN Chair in 2020, thus helping enhance ASEAN solidarity and role and strengthening connectivity between the regional bloc and the UN and the UNSC.

In that month, the council held about 30 meetings and adopted 13 decisions, including four resolutions and one decision on extending UN missions, forces and mechanisms, one Chairman Statement, five press statements, and two press releases.

Ambassador Marc Pecsteen de Buytswerve, Permanent Representative of Belgium to the UN, told the Vietnam News Agency (VNA)’s correspondents at the UN that Việt Nam had done a good job despite formidable challenges when it took up the presidency of the UNSC at the beginning of its tenure as a non-permanent member of the council.

Việt Nam really left an imprint with the open debate on the 75th anniversary of the UN Charter, particularly in the context of mounting tensions in the UN as well as in the world, he added.

As a coordinator of the ten current non-permanent members (E10), in May 2020 Việt Nam actively resumed the annual meeting mechanism, disrupted by the COVID-19 pandemic, between the E10 and the UN Secretary General via videoconference.

It chaired a dialogue between the E10 and the five newly-elected non-permanent members (I5) with the theme “Joining Efforts for an Effective UNSC: Best Practices and Experiences for Elected Members” and an International Conference on Women, Peace and Security.

The success gained in the first half of the 2020-2021 tenure is a firm foundation for Việt Nam to create more imprints in the second half and complete a successful tenure, contributing practically to maintaining regional and international peace and security and maintaining a peaceful and stable environment for national development. — VNS