In the recent time, the Central Vietnam has suffered unprecedented natural disasters, storms, floods, and landslides, which have seriously affected the lives of millions of families in the region. More than ever, the national community unanimously joined hands to support the central region to overcome difficulties, in which many leading enterprises have actively made donations.

With its sustainable development orientation, SCG always takes efforts to contribute to the communities where it operates. SCG is one of the corporate citizens with many outstanding initiatives contributing to improving the quality of local life. The company has built many “Sharing the Dream” playgrounds in Ho Chi Minh City and Vung Tau. Meanwhile, SCG Sharing the Dream offers scholarships to 4,000 students nationwide. SCG has recently handed over COVID-19 mobile positive pressure chambers to Danang and Dong Nai to protect medical workers at the peak of the COVID-19 pandemic. The company has donated billions of dongs to local people in different localities to overcome COVID-19 challenges.

As Vietnam has suffered devastating natural disasters in 2020, SCG Group affirmed its commitment for the community to support the people of Central Vietnam in overcoming difficulties and rebuilding their lives. Through the “Action for beloved central region” campaign, SCG and its member companies from the north to the south have donated their resources and materials worth up to several billions of dongs to help people settle down and make a living after the natural disasters.

SCG Cement – Building Materials Vietnam Co., Ltd. has granted over 2,000 gift packages of basic necessities to flood-stricken victims in Central Vietnam. The company also donated 300 tonnes of cement to Quang Binh and 100 tonnes of cement to Quang Tri to repair roads and public infrastructure. The company also provided financial support for its employees to repair damaged houses after the disaster.

Nopporn Keeratibunharn, general director of SCG Cement – Building Materials Vietnam said that  “To pursue its mission “ Passion for Better ”, SCG is committed to accompany authorities and people in the central region to overcome challenges caused by the natural disasters. With manufacturing facilities in Quang Binh and an operation network across the country, we believe this capaign shows the  compassion and empathy of the Vietnamese for the Vietnamese people. We will do our best to assist local people to overcome difficulties and settle down as soon as possible.”

Member companies under SCG have provided timely support to the people of Central Vietnam. They are still struggling to overcome the difficulties caused by the typhoons while facing the threat of coming floods.

In the coming time, SCG’s “Action for beloved central region” campaign will continue to donate 1,000 gift packages of stationery to students in the flood-hit areas, helping them return to school after disruptions. This activity is also in line with SCG’s mission of developing people through education for many years. 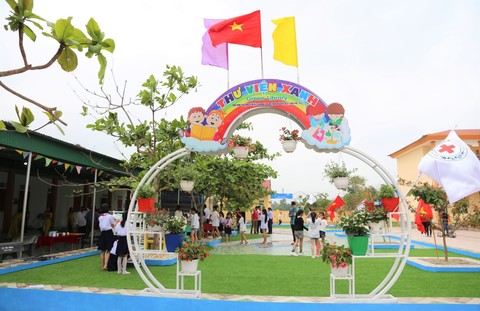 The Viet Nam Red Cross Society (VNRC) inaugurated the work of repairing 22 schools damaged by storms and floods in Nghe An, Ha Tinh and Quang Ngai provinces in 2020 on April 5 and 6.

The schools were repaired by the VNRC and provincial Red Cross societies with financial support of US$100,000 from US based Lee’s Sandwiches fast-food restaurant chain.

“We hope that, after being repaired, teachers and students will have better conditions to teach, play and study to grow up to become elite citizens in the future,” said VNRC Vice President Tran Quoc Hung.

“Lee’s Sandwiches is very pleased to be the companion of the Vietnam Red Cross to restore the path to school of students in the central provinces. I hope that the people of central region will be more comforted and warmed to know the Vietnamese community in the US and around the world will always look to the country and to the central region to share difficulties and losses of people affected by natural disasters or floods,” said Lee’s Sandwiches general director Le Van Chieu.

Chieu added that the support came from 50 per cent of the company’s total sales of coffee products from November 3 to November 18 and donations by its staff, customers and Vietnamese friends in the US.

Previously, through the VNRC, Lee’s Sandwiches donated $100,000 raised from “Towards the Central”, a programme launched by Lee’s Sandwiches to support the flood and storm affected people in central region of Viet Nam. — VNS

In the 45-square-meter mountainside home of Dang Quang Huy, 34, growing cracks spread across the walls and subsiding floor of the bedroom, living room and kitchen.

“I don’t remember how many times I’ve repaired my house in the past year since a nearby resort project started triggering quakes and rock falls,” he said.

Around 400 meters from Huy’s house, the luxury resort project covering 24 hectares, funded by Ho Chi Minh City-based Green World Corporation, was granted an investment license in 2012. Subsequent construction on the Haborizon resort and villa project on Hon Ro Mountain began a year ago.

Huy said the use of explosives twice a day caused soil and rocks to rain down onto neighborhood roofs, covering everything in a permanent layer of dust. According to him, no resident had been informed about the commencing blasts.

When an explosion would occur, Huy and his wife would rush their two sons outside.

“We have to run from these explosions like during wartime,” he complained.

Huy’s home was built seven years ago for nearly VND300 million. It collapsed twice due to Typhoon Damrey in 2017 and landslides in 2018. The self-employed family had to then borrow nearly VND100 million to restore the damage.

After informing local authorities and the project investor, and despite an inspection of the impacts on his home, neither solution nor compensation has been suggested.

Huy’s family is one of 70 households suffering the effects of resort construction.

In the Thanh Phat Village home of Nguyen Van Ngoc, 41, both living room and bedroom walls feature three-centimeter-wide cracks. With the foundation also subsiding, Ngoc has turned to iron and cement for reinforcement.

Boulders dislodged by blasting have accumulated around his house.

He and his wife had settled in the area more than 10 years ago, enjoying a humble existence until resort construction disrupted their lives.

“My family has been on tenterhooks thanks to the ongoing explosions,” Ngoc stressed, adding the environmental pollution and noise was unbearable.

“Many deadly landslides have occurred in Nha Trang. Therefore, during the stormy season, we are extremely worried,” Ngoc said.

Pham Van Phi, head of the project management board, said provincial authorities had licensed the unit to employ 64.5 tons of explosives and 20,000 detonators of all kinds to destroy part of the mountain and facilitate construction.

Blasting typically occurs three to four times a week. To date, about 500 kilograms of explosives have been detonated, reduced to 296 kilograms as requested by provincial leaders, Phi said.

The company would work with local authorities to compensate affected families, he said.

Inspecting the site on April 7, Nguyen Tan Tuan, chairman of Khanh Hoa, said, “The investor has ensured safety to minimize the impact on nearby families.” However, he asked the investor to check and repair all homes damaged due to construction activities.

Nha Trang in Khanh Hoa Province along the central coast has emerged as a famous beach destination in Vietnam in recent years, resulting in a large wave of property and resort developers flocking to initiate luxury tourism projects.

However, the town is vulnerable to natural disasters like landslides and flooding. At least 17 had been killed in Nha Trang due to landslides triggered by heavy rain caused by the Toraji typhoon in 2018 while 44 died when the Damrey storm , one of the deadliest typhoons in Vietnam, hit the province in 2017.