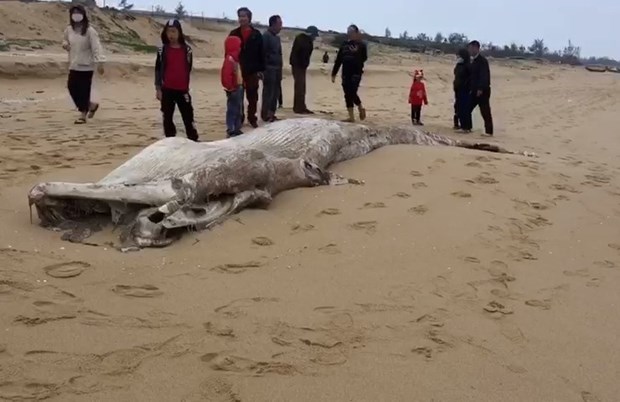 Local authorities coordinated with residents to bury the decomposing whale, measuring 7-8m in length, immediately after finding the carcass on March 2. (Photo: VNA)

Quang Binh (VNA) – A dead whale weighing about one tonne has been found washed up on a beach in the central province of Quang Binh , a local official said on March 3.

Nguyen Van Huu, Chairman of the People’s Committee of Quang Tho ward in Ba Don town said local authorities coordinated with residents to bury the decomposing whale, measuring 7-8m in length, immediately after finding the carcass on March 2.

Vietnamese coastal residents have believed that whales would help fishermen at sea. So, they often rescue the animals whey they run aground or bury the dead ones.

Cau Ngu ( whale worship ) festival is part of the cultural identity of Vietnam’s central coastal localities, which has been preserved and passed down through the generations.

The festival is held annually after the Lunar New Year, when fishermen start a new fishing season. It aims to express gratitude towards Nam Hai for safeguarding fishermen, and pray for bumper hauls of fish, safe voyages and peace for the nation./.

HCMC – The Ministry of Education and Training has added German and Korean as first foreign language subjects to the curriculum for students from grades three to 12, a decision that took effect from February 9.

The pilot foreign language teaching program aims to help students improve their communication skills in the two languages through listening, speaking, reading and writing as well as language knowledge.

A representative of the Ministry of Education and Training said the news that the two languages would be compulsory for graders three to 12 was inaccurate.

Vietnam, a truly fascinating country, offers a 3,260km coastline, connecting the north and south with white sandy beaches. Beyond its significant coast, the country boasts overlapping ranges of mountains, primaeval forests, and world-famous caves. The destination is also known for its rich history, deep culture and arts, and unique street food cuisine.

More than its diverse natural landscape, Vietnam also has vibrant cosmopolitan cities such as Hanoi and Ho Chi Minh City, each with their own distinct ambience and rhythm. Hanoi offers a traditional setting with a heritage dating back 1,000 years. Ho Chi Minh City is a high-energy urban and business centre with skyscrapers and a bustling streetscape. There are also the idyllic landscapes of the Vietnamese countryside and craft villages. These include bountiful fruit orchards across the Mekong Delta; narrow Hoi An streets adorned with bright red Bougainvillea trellises of ancient yellow houses; and the terraced paddy fields in Sapa.

Vietnam has become one of the top destinations in the Asia-Pacific region, attracting tourists from all over the world. The US-based Go Overseas website ranked Vietnam 8th on its list of top 10 travel destinations for 2019, saying the nation is “filled with beauty at every turn”. As a home to eight UNESCO World Heritage sites, Vietnam was also rated as one of the 10 most unique destinations in Southeast Asia in 2019 by The Quarterly Tourism Monitor , while Condé Nast Traveler ranked Vietnam 9th of its 20 favourite destinations of 2020.

Factors to turn Vietnamese tourism into an economic juggernaut

Prior to 2020, global demand for travel and tourism was booming around the world, with growth of roughly 4 per cent per annum expected over the next decade (2019-2029). In addition, Vietnam’s GDP growth, young population, and rapidly expanding middle class are all driving tourism. According to World Bank statistics, between 2002 and 2018, GDP per capita in Vietnam increased by 2.7 times, while real GDP grew by an estimated 7 per cent in 2019 – one of the fastest growth rates in the region. According to the International Monetary Fund, Vietnam’s GDP per capita ranks fifth in ASEAN, reaching $5,212 by 2025.

Demographic change with a population of 96.2 million in 2019 is expected to increase to 120 million by 2050. Moreover, the proportion of the young population under 35 is around 55.5 per cent, according to the Census Report 2019, while Vietnam’s new middle class is expected to reach 26 per cent of the total population by 2026 – all these factors will drive robust demand for tourism. Domestic tourism has experienced an excellent surge – a four-fold increase in the number of domestic traveller-trips, from 20.5 million in 2008 to 80 million in 2018. Generally speaking, in 2015-2019, the tourism industry had a significant growth rate of 22.7 per cent. According to the World Economic Forum’s 2019 Tourism Competitiveness Index (WEF), Vietnam ranked 32nd globally (out of 120 countries) in terms of quantity and attractiveness of natural resources and culture, and 3rd in Southeast Asia (after Indonesia and Thailand).

The direct contribution of tourism to GDP is also increasing. If in 2015 tourism contributed 6.3 per cent to the national GDP, the rate in 2019 was 9.2 per cent. Tourism is gradually aiming to become a key economic sector, according to the Politburo’s Resolution No.08-NQ/TW dated January 16, 2017.

Despite the current situation of the COVID-19 pandemic, Vietnam’s tourism has remained relatively resilient thanks to strong local demand and the Vietnamese government’s leadership and success in limiting the number of cases, contact tracing, and social distancing. Once international travel resumes, creating significant economic opportunities for Southeast Asian travel destinations, Vietnam’s tourism growth will be higher.

By 2030, tourism is set to become a key industry, making Vietnam one of the top 30 most competitive tourism destinations in the world with an average growth rate of 11-12 per cent per year, contributing 15-17 per cent to GDP.

Realising the enormous long-term potential of the tourism market in Vietnam, in 2016, Warburg Pincus, VinaCapital, and its co-founder Don Lam established Lodgis Hospitality with the vision to aggregate a portfolio of high-quality hospitality assets and build an institutional grade, fully-integrated lodging investment platform.

With its operating headquarters in Ho Chi Minh City as well as with offices in Singapore and Bangkok, Lodgis has a team of highly experienced and dedicated industry professionals with disciplines in investment, asset management, development, project management, design, and operations. Through its wholly-owned hotel management company – Fusion Hotels and Resorts – the company provides management and design consultancy services across a suite of brands including Fusion Resorts, Fusion Suites, Fusion Originals, Maia, Hiive, Glow, Glow the Premium Collection, and Glow Inn.

Fusion Hotels and Resorts has representation in all of the leading cities and resort destinations in Vietnam including Ho Chi Minh City, Danang, Cam Ranh, Phu Quoc, Quy Nhon, and Vung Tau with many more flags under discussion. Glow has properties in Thailand’s most popular markets including Bangkok, Phuket, Pattaya, and Krabi.

Among one of the most exciting projects at Lodgis is the planned launch and development of Ixora Ho Tram by Fusion located at the Ho Tram Strip Complex, set along the beachfront. This exclusive beachfront development designed by leading international consultants will have 46 pool villas and 164 condotels. Ixora Ho Tram by Fusion will be part of the broader integrated Ho Tram Strip Complex, providing guests a number of restaurant and entertainment options, whilst having a strong sense of privacy. Ho Tram is conveniently located an approximately two-hour drive from Ho Chi Minh City.

In discussing the company’s long-term investment strategy in Vietnam, Peter T. Meyer, CEO of Lodgis Hospitality, shared that, “Vietnam is a beautiful country, ranking among the most exciting travel markets. With its natural beauty, interesting history, unique culture, appealing cuisine, and strong hospitality, it is a very attractive international destination. Given its great prospects, Vietnam is central to our investment strategy. We hope to play our part in further developing Vietnam into a world-class tourism destination.” 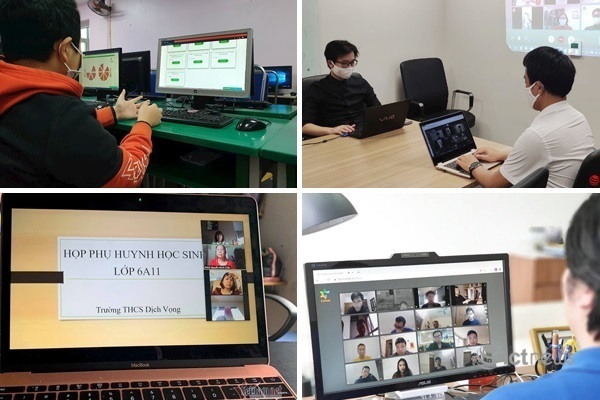 Teachers and students have become used to video conferencing software, but they still face problems during study. Students complain they sometimes are thrown out of class because of unstable internet connections.

Most schools still use Zoom for online teaching, though experts have warned of security problems and limitations in free versions.

Many online conferencing solutions have been developed by Vietnamese firms, including Zavi by VNG, CoMeet by CMC TS, NetNam, iWay, FDS and DQN, and TranS by Nam Viet.

CoMeet is a made-in-Vietnam software product with no interruption during conferences thanks to 100 percent use of domestic bandwidth with high customization features, tailored to every business.

However, despite the appearance of a series of Vietnam’s video conferencing platforms, many schools and businesses still use Zoom, while others prefer Microsoft Teams or Google Meet to Vietnamese products.

The Zoom app ranks No 1 among the free apps on Play Store and App Store. Google Meet ranks second.

Zoom faced criticism when it was found leaking personal information of hundreds of thousand of users, transferring data to Facebook. It has been prohibited by the US and UK government agencies because of security vulnerabilities.

Explaining this, experts said other software products either have too many barriers or are too difficult to use and are less known than Zoom.

For individual users, there are problems even more concerning than the security problem. The troubles students most complain about are the low-quality sound, blurred images and network lag. It is difficult to find out if these are caused by the computer/smartphone configuration, app/software or the transmission line.

Nguyen Hong Phuc, a security expert in HCM City, said that is why his firm still uses Skype when working with foreign partners.

Foreign platforms are still preferred in Vietnam thanks to certain advantages, including the high number of features integrated in platforms and the large ecosystem.

While visiting their shrimp breeding ponds, local people in Ba Don town in the central province of Quang Binh saw a dead whale weighing about 1 ton, 8 meters long, that was decomposing ashore.

On March 3, the authorities in Ba Don Town, Quang Binh province, and local people buried the dead whale that washed ashore the local beach a day before, said Mr. Nguyen Van Huu, Chairman of the People’s Committee of Quang Tho Ward.

Huu told VietNamNet that the dead whale was discovered by local residents on March 2. It had been dead for a long time.

On March 3, the local authorities and people used an excavator to dig a huge hole to bury the whale according to the custom of local fishermen, Huu said.

Whales are considered sacred animals by Vietnamese fishermen. It is a common belief among fishermen that if they properly burying dead whales, sailors will be blessed with good luck, good weather, bountiful catches and protection at sea.

HCMC – Danang Chairman Le Trung Chinh has launched a plan to pilot the “Danang By Night” program to help tourism activities and services recover as soon as possible, while following anti-coronavirus measures and boosting economic development in line with the prime minister’s directive.

The tourism program that will be piloted from 2021 to 2023 will run from April 30, Vietnam’s Reunification Day, VietnamPlus news site reported.

From now until April, the tourism program will be popularized among individuals, organizations and firms, mainly enterprises active in the tourism sector. Through the program, numerous tourism products and services are expected to be launched to serve visitors.

The “Danang By Night” program will feature a variety of activities such as art lighting shows, night life on the An Thuong Street for tourists, a Cham dance performance and fashion shows, among others.

Apart from entertainment and cultural activities at the My An Beach at night, the program will also comprise various traditional folk games, film shows on beaches, street music, art and calligraphy exhibitions.

Further, the Danang government has called on supermarkets, shopping centers, stores and eateries to roll out promotional programs during happy hours at night to attract more tourists and stimulate consumption, contributing to the city’s economic growth.

Director of the Danang Tourism Department Truong Thi Hong Hanh said that the “Danang By Night” program was aimed at tapping the city’s potential for tourism and diversifying tourism products and services.