The 37-year old man is an expert who is working for VinFast Trading and Production LLC, a subsidiary of Vietnamese conglomerate Vingroup.

The patient originally entered the nation on April 17 and was immediately brought to a concentrated quarantine facility at Canh Hung Hotel in Hong Bang district of the northern city of Hai Phong.

Once in quarantine, two COVID-19 tests were taken, with the results coming back negative twice on both April 19 and on April 30, respectively. Subsequently, he ended his quarantine period on May 1 and traveled to his apartment in Vinhomes Times City by taxi.

Following this, he went to Vinmec International Hospital on May 3 to undergo a further COVID-19 test, with the results being positive for the SARS-COV-2 virus on May 4. The patient was subsequently transferred to an isolation treatment at the National Hospital for Tropical Diseases.

At present, relevant units have been able to successfully trace six F1 cases who came into close contact with the patient, including his wife and children, in addition to three residents living in the same building.

Currently, his wife and children have been put into temporary isolation at their residence, while the three remaining individuals will be taken to a concentrated quarantine facility.

Furthermore, the driver who brought the patient back to Hanoi has also been put in quarantine for testing in the northern province of Hai Phong.

Moreover, 41 people who reside on the same floor as the patient in Vinhomes Times City have been sampled, with their test results yet to be verified.

The Park Hill 10 building has a total of 34 floors, forcing approximately 1,500 residents to be put into lockdown following the latest detection of the Indian case.

The area where the patient is living in Hà Nam has been locked down. — Photo: nld.com.vn

HÀ NAM — A 28-year-old man in the northern province of Hà Nam tested positive for SARS-CoV-2 after finishing 14 days of mandatory quarantine.

Director of the provincial department of health Nguyễn Trọng Khải confirmed the case with media on Thursday morning.

The man entered Việt Nam on April 7 after ending a labour contract in Japan.

He was quarantined for 14 days in central Đà Nẵng City and tested negative for coronavirus three times before completing the quarantine period.

The last test was conducted on April 21.

After returning home from the mandatory quarantine period, he developed signs of fever and sore throat and was taken to a local clinic for a COVID-19 test on April 28. The result was positive.

The test was confirmed once by the Hà Nam Province Centre for Disease Control. More tests will be required to ensure accurate results, the director said on Thursday morning.

According to the provincial department of health, after completing the quarantine period in Đà Nẵng, on April 22, the patient took a coach from Đà Nẵng to Liêm Tuyền toll booth in Hà Nam Province then took a taxi to his house to self quarantine at home.

On the afternoon of April 22, he had a hair cut at a local barber shop and drank beer with four friends at a bar in Bình Lục District in the evening.

He went to visit a relative in the area and met five people on April 23.

He went to a petrol station on April 24 and met a member of staff there. He also had contact with five other people the same day.

Thirty-two people have been identified as having direct contact with the case while 200 others are F2.

The health department of Hà Nam Province and local authorities have taken samples and quarantined all people in close contact with the case and disinfected the patient’s house.

The list of F1 and F2 is being tracked further.

People who had close contact with the new case have been advised to make health declarations and quarantine at home.

In a related move, a person in the central province of Nghệ An was confirmed as positive for COVID-19 on Thursday morning after sharing the quarantine site with a positive case confirmed earlier.

The new patient entered Việt Nam on April 14 from Japan and has been quarantined at a hotel in Con Cuông District.

The case has been transferred to a different site after a person sharing the room was confirmed to have COVID-19 on April 20. — VNS

Local authorities have so far identified more than 200 people who had directly or indirectly come into contact with the patient. Among them is a student of Hanoi-based Academy of Cryptography Techniques.

All of the F1 and F2 cases have been transferred to concentrated quarantine facilities for medical surveillance, and epidemiological investigations are underway, said a representative of the provincial Department of Health.

The patient, a 28-year-old man returning from Japan, tested positive for the SARS-CoV-2 virus after completing a 14-day quarantine period according to COVID-19 rules.

While staying in quarantine in Da Nang, the patient had tested negative three times, meeting the criteria for self-quarantining at home.

However, two days after leaving the Da Nang quarantine facility for home, the man showed virus-like symptoms such as a cough and a sore throat.

The Ha Nam Centre for Disease Control (CDC) took his nasal swab for testing, with the results coming back positive.

The CDC Ha Nam took another sample for testing and at the same time sent it to the National Institute of Hygiene and Epidemiology for confirmation.

One day later, another four people who are the patient’s relatives were diagnosed with the SARS-CoV-2 virus.

All of them live in the same house, according to the Ha Nam Centre for Disease Control.

Local authorities have so far identified 32 people (F1) who had come into close contact with the patient, and 210 others (F2) who had indirectly contacted the patient.

F1 cases were transferred to concentrated quarantine facilities, while F2 cases were required to self-isolate at home.

The patient, a 28-year-old man returning from Japan, tested positive for the SARS-CoV-2 virus after completing a 14-day quarantine period according to COVID-19 rules.

While staying in quarantine in Da Nang, the patient had tested negative three times, meeting the criteria for self-quarantining at home.

However, two days after leaving the Da Nang quarantine facility for home, the man showed virus-like symptoms such as a cough and a sore throat.

The Ha Nam Centre for Disease Control (CDC) took his nasal swab for testing, with the results coming back positive.

The CDC Ha Nam took another sample for testing and at the same time sent it to the National Institute of Hygiene and Epidemiology for confirmation.

Among the four new cases, one imported case was confirmed positive for SARS-CoV-2 in the central province of Quang Tri after entering the Lao Bao border gate, and the three remaining domestic cases in Hanoi and Hung Yen were F1 contacts who either came into direct or indirect contact with the latest novel coronavirus (COVID-19) patient recorded in the northern province of Ha Nam on April 29.

The nation has so far recorded a total of 2,914 coronavirus infections, including 1,580 locally-transmitted cases and 1,334 imported ones.

Among the overall figure, a total of 2,516 coronavirus patients have fully recovered from the disease, with the death toll related to the SARR-CoV-2-virus remaining at 35.

Furthermore, 48 of those still receiving treatment have tested negative for the virus at least once, with most of them giving negative results.

More than 37,240 people who are currently in quarantine nationwide after having close contact with COVID-19 patients or entering Vietnam from pandemic-hit regions.

According to the Expanded National Immunization Programme,  a total of 506,435 frontline healthcare workers along with members of community-based anti-COVID-19 groups had been injected with the COVID-19 vaccine from March 8 to April 29.

Following the latest detection of one community cases one day earlier, the Hanoi People’s Committee decided to raise the warning against COVID-19 in the capital to the highest level and suspend all non-essential services as from zero hours April 30.

Under the decision, all karaoke palours, nightclubs, bars, and e-game stores were temporarily closed until further notice in an effort to prevent the spread of the novel coronavirus (COVID-19). 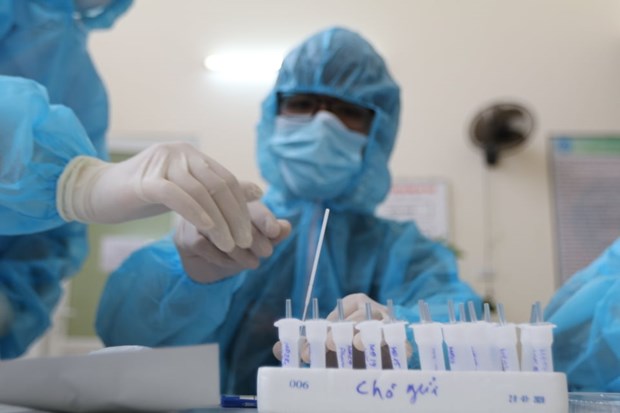 Hanoi (VNA) – Vice Chairman of Hanoi People’s Committee Chu Xuan Dung required raising the warning against COVID-19 resurgence in the city to the highest level at a meeting of the municipal steering committee for COVID-19 control on April 29 afternoon.

He noted that two F1 cases have been detected in Hanoi in connection with the latest cluster of cases in the northern province of Ha Nam, and urged relevant agencies to accelerate tracing work .

Anyone who leaves Hanoi during the holiday is required to make health declaration when returning, he said.

Later in the evening, CDC Hanoi confirmed one new patient in connection with the case in Ha Nam.