Vietnam has enjoyed high export growth but experts are concerned that the main contributor is foreign direct investment (FDI).

In the first quarter of the year, the country saw an estimated import and export value of US$152.65 billion, up 24.1 per cent over the same period last year. Of which, export turnover was estimated at $77.34 billion, an increase of 22 per cent from Q1 of 2020.

Deputy Minister of Planning and Investment (MPI) Tran Quoc Phuong told local media: “The export share of the FDI sector is growing, reaching more than 76.3 per cent, while in the past, it was just between 60 and 70 per cent.”

“This shows that Vietnam’s export growth is increasingly dependent on FDI and this is noteworthy,” he said, adding that in recent years, the proportion of FDI contribution in total export turnover has been increasing.

According to the ministry, in 2020 the FDI sector contributed $202.89 billion of the total export turnover of the country, accounting for 71.7 per cent.

While in footwear and textiles, the majority of exports also belong to FDI with 81.9 per cent and 62.5 per cent, respectively.

The heavy dependence on FDI has been discussed for a long time, but with the export portion of more than 76 per cent, it was a bigger concern, said experts.

Vu Thanh Tu Anh, from Fulbright University Vietnam, said: “The growing dependence of the economy on the FDI sector is very difficult to accept. If Vietnam wants to create internal resources, we cannot depend on FDI as at present.”

According to the 2020 Enterprise White Book, by the end of 2019, Vietnam had 758,610 operating enterprises, of which 16,878 were FDI enterprises. Despite accounting for a much smaller group, they have a huge contribution to the country’s export turnover.

To deal with the issue, economists have said the country must build an autonomous economy on the basis of mastering technology and integrating and diversifying markets.

Minister of Planning and Investment Nguyen Chi Dung previously said: “Vietnam must form a new national production capacity, have autonomy, participate effectively, improve its position in the global value chain and be effectively resilient to major and unusual external impacts.”

The minister called for better connections between the FDI and the domestic sectors, suggesting a programme to encourage experts and managers who are working in foreign businesses to establish Vietnamese enterprises.

He told local media: “These are people who have the knowledge, know the technology, the production process, the operating process and the business administration, have relationships and experience so when separating to establish a business, those enterprises will see the fastest success.”

Other experts agreed that attracting talents from FDI to local enterprises was a way for Vietnamese enterprises to gradually grow and become partners with FDI enterprises and join their global value chains and more contribute to Vietnam’s export growth, avoiding being too heavily dependent on foreign investment as at present.

December alone saw the total import and export value of FDI firms reach US$38.48 billion, marking an increase of 9.6% from the previous month.

Most notably, FDI enterprises exported goods worth a total of US$20.44 billion in December alone, a boost of 8.2% from the previous month, while their  total export value during 2020 rose by 10.7% to US$202.89 billion compared to the previous year.

According to the statistics compiled by the General Department of Vietnam Customs, the trade balance of FDI firms in December and throughout the entire year returned to a surplus of US$2.4 billion and US$33.87 billion, respectively. 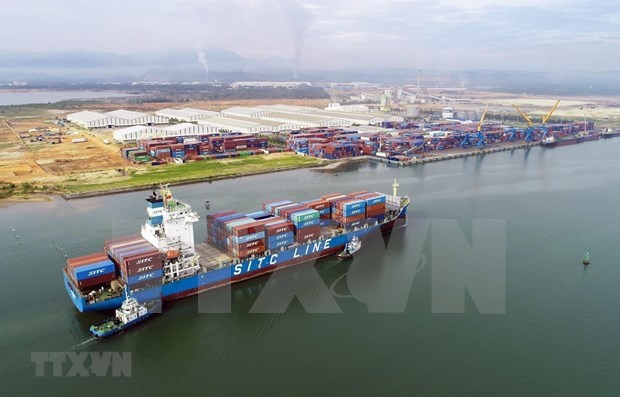 Hanoi (VNA) – Foreign direct investment (FDI) firms’ import-export value reached 68.52 billion USD in the first two months of 2021, a surge of 31.5 percent from the same period last year, according to the General Department of Vietnam Customs.

Among sub-sectors, the machinery, tools and parts posted the largest export growth 77 percent, increasing 2.44 billion USD. It was followed by phones and spare parts (2.2 billion USD, or 29 percent), and electronics and parts (1.85 billion USD, or 34 percent).

As of February 20, 5.46 billion USD worth of FDI was injected into Vietnam, equivalent to 84.4 percent of the figure recorded in the same time last year, according to the Ministry of Planning and Investment .

As many as 126 foreign projects were granted investment licences with total registered capital of 3.31 billion USD, a year-on-year fall of 33.9 percent.

Enhancing the linkage between domestic and foreign-direct-investment (FDI) electronic enterprises can be an important solution to promote the development of this industry which is now dominated by the FDI sector.

Vietnam was now home to factories of a number of global technology giants such as Samsung, LG, Canon and Intel with investment sums worth billions of dollars.

The country recently emerged as a top destination for FDI in the global production shift.

Oppo was planning to build a plant in the northern province of Bac Ninh while Lenovo was also studying the opportunity for a plant in Bac Ninh or Bac Giang.

Although Apple has not announced plans to assemble iPhones in Vietnam, many of their partners were increasing the production of components in the country.

Foxconn invested in a project producing iPads and MacBooks worth US$270 million in Bac Giang three months ago and planned to expand production in the country with a goal of reaching revenue of $40 billion in the next three to five years.

According to Tran Thanh Hai, Deputy Director of the Import-Export Department under the Ministry of Industry and Trade, there was a significant change in the electronics industry in recent years that Vietnam had original design manufacturers (ODMs).

Still, the electronics industry of Vietnam was still dominated by the FDI sector.

Do Thuy Huong from the Vietnam Electronic Industries Association said it was necessary for Vietnamese firms to cooperate with FDI enterprise to establish value chains in the electronics industry.

Three factors must be in place to be able to become suppliers of global technology giants – quality, on-time delivery and reasonable price, she said.

According to Vietnam Industry Agency, the capacity of domestic electronics enterprises remained limited, while the product quality and design had not met market demand.

There were emerging names recently, such as Bphone, Vsmart and Viettel, but foreign names were still dominant.

The local procurement rate was also low, only at around five to 10 per cent. Electronic products in the Vietnamese market were mainly imported or assembled from imported components.

Some companies managed to participate in the industry’s supply chains but most could only supply products of low value and technology content.

The Vietnam Industry Agency said that domestic electronic enterprises must improve their capacity to be able to participate in the supply chains of the FDI enterprises as well as being able to take advantage of opportunities arising from new-generation free trade agreements.

Support should be provided to selected enterprises that take the role in promoting the development of the electronics industry, the agency said.

Besides solutions to expand markets, enterprises should focus on identifying their core products and strengths to create breakthroughs.

HCMC – Foreign direct investment (FDI) firms still dominated electronics shipments to foreign markets in the first quarter of 2021, accounting for a whopping 95% of the total revenue from electronics exports, according to the Vietnam Industry Agency under the Ministry of Industry and Trade.

Statistics from the agency indicated that between January and March, electronics were listed among groups with export earnings of over US$5 billion. The country saw computers, electronic products and accessories report export turnovers of US$12 billion, soaring by 31% year-on-year.

Apart from representing a lion’s share of electronic export earnings, FDI firms also accounted for a large proportion of 99% in the shipment value of phones and phone parts during the three-month period.

The agency attributed the FDI firms’ domination to a low localization rate in the electronics sector at a mere 5%-10%. Most electronic products in the Vietnamese market are imported ones.

Though local supporting industry firms are participating in the value chain of the electronics industry, most of them offer low technology products.

In addition, the growth of domestic electronics companies has slowed down or gradually faded away in the local market.

The capacity of domestic firms remained limited, while the quality and styles of products failed to meet the high demands of the market. Besides, the link between local suppliers and FDI firms and multinational corporations remained weak, according to the Vietnam Industry Agency.

The agency said that through some programs and activities, local firms had enhanced their efforts to improve the quality of their products to join the supply chain of FDI firms.

However, the electronics sector faced a shortage of major strategic products that could lead the market, the local media reported.

Aside from this, the agency called on electronics firms to focus on key products that have a powerful breakthrough to boost the sector.

China tops the list of 14 countries who made investments into the Vietnamese wood industry, with a total of 23 projects throughout 2020.

According to information released in a recent report, direct foreign investment (FDI) increases in the local wood processing industry showed a sharp increase last year, with over US$327.7 million being put into 63 new FDI projects in the industry nationwide. China emerges among 14 foreign investors in the Vietnamese wood industry

Furthermore, 52 projects registered to increase additional capital of US$193 million, while 122 others registered for capital contribution and share purchase, with a total value of US$244.8 million. Out of a total of 63 newly-registered projects last year, China topped the list of the 14 foreign investors in the Vietnamese wood industry with 23 projects. Despite this, the amount of investment capital remained modest, with only approximately US$2.27 million being poured into each FDI project, a year-on-year drop of 37%. According to a report compiled by Forest Trends, and several local timber and forestry product associations, although the number of FDI enterprises operating in the wood industry only accounted for 18%, their exports made up 51% of the country’s overall wood export turnover last year.