The anti-dumping duties will apply to certain extruded aluminium products produced by 18 Chinese companies, with the tax rate depending on the Chinese producer, according to the Ministry of Industry and Trade.

In October 2019, the ministry had imposed anti-dumping duties of 2.49-35.58 percent on aluminium products of 16 Chinese companies.

According to the ministry, the Chinese firms’ dumping activities had seriously hurt domestic aluminium producers, some of whom had to halt production and lay off large numbers of workers.

In some cases, the aluminium, which had already been blocked by other countries with trade barriers or anti-dumping measures, was being sold at prices lower than production costs, the ministry said.

The volume of Chinese extruded aluminium imported into Vietnam, not including volumes brought into economic zones to process for exports, reached 62,000 tons in 2018, double that of 2017.

After one year of imposing anti-dumping tariffs on the aluminium products from China, the ministry began reviewing the measure in November 2020 and decided on the upward revisions this month. 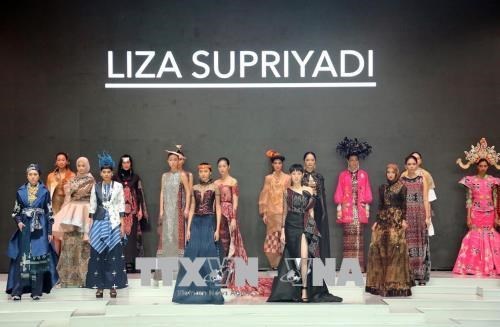 Fashion is the creative economy sub-sector with the highest contribution to GDP in Indonesia. (Photo: VNA)

Jakarta (VNA) – Indonesia’s creative economy industry has been ranked third in the world in terms of its contribution to the national GDP, said an Indonesia n minister during a webinar for pushing half a million new exporters in Jakarta earlier this week.

The United States is currently ranked first with its Hollywood film industry, followed by the Republic of Korea with its K-Pop industry, Minister of Tourism and Creative Economy Sandiaga Salahuddin Uno said.

Fashion has so far remained the creative economy sub-sector with the highest contribution, 9 billion USD, to Indonesia’s GDP, the minister informed. Meanwhile, the handicrafts industry contributes 4.9 billion USD and the culinary industry 1 billion USD, he added.

The culinary industry’s contribution to the GDP is relatively low, Uno observed. As a matter of fact, Indonesia has a variety of national foods, including rendang, the scrumptious meat dish from West Sumatra, crowned the Best Food in CNN’s World’s 50 Best Foods, he noted.

He called for boosting the export of culinary products, saying it must be raised at least five times to catch up with fashion and handicrafts, which are growing significantly.

The Ministry of Tourism and Creative Economy is running a programme to provide incentives to creative economic players in order to help them penetrate into export markets, he added./.

The US – Vietnam Bilateral Trade Agreement has been a fundamental foundation in economic relations between the two countries, providing Vietnamese traders with opportunities to access to the world’s largest economy and open door for global economic integration.

Vietnam’s Chief Negotiator of the US – Vietnam Bilateral Trade Agreement (BTA) Nguyen Dinh Luong today [April 23] launched a book tiltled ” Viet Nam – Loi re cua mot nen kinh te ” (Vietnam – New Pathway of an Economy) in Hanoi, sharing with readers his version of ups and downs behind the historic agreement, and more importantly, how it turns former foes into partners.

In a letter sent to Luong at the book launching ceremony, US Chief Negotiator for the BTA Joseph Damond wrote: “It was a totally unexpected experience for me that eventually you and I would not be adversaries across the table, but almost become partners with the same mission.”

“That mission was to build mutual understanding, so that we could craft an agreement of mutual benefit. We became like brothers,” he noted.

Chairwoman of the American Chamber of Commerce in Vietnam (AmCham) Virginia Foote, who read out the US Chief Negotiator’s letter at the event, said: “With this book, I and Joe [Joseph Damond] are very excited to relive this history again.”

Regarding the BTA, Foote told Hanoitimes the deal has been a fundamental foundation in economic relations between Vietnam and the US. “Later on, it proved to be the most important document for our relationship,” she added.

More than 20 years since the signing of the BTA [July 13, 2000], the book shed light from the Vietnamese side on the story behind the negotiation process that took five years and 11 negotiation rounds to complete.

The move later became a major turnaround for the Vietnamese economy at that time, providing local traders with opportunities to access to the largest economy in the world, and more importantly, an open door for global economic integration.

During the five-year period after the normalization in 1995, bilateral trade rose modestly from US$450 million to US$1.09 billion. However, trade turnover surged by an average of 20% annually since the BTA kicked in.

In his own book 13 years after the signing of the BTA, titled Give Trade a Chance, Joseph Damond revealed his biggest impression throughout the negotiation was that two sides of little understanding of each other had learned to work together to build mutual trust and sympathy.

“This makes people change their mindset and thoughts on issues facing Vietnam on the road towards prosperity,” he said.

Editor-in-Chief of the Economic and Urban Newspaper Nguyen Minh Duc referred to a statement from Chairman of the Party Central Committee’s Economic Commission Tran Tuan Anh that there have not been any trade deal like the BTA that not only addresses trade, investment and services, but also leads to a complete revision and perfection of Vietnam’s legal framework for opening the economy to the world.

“Right after the signing of the BTA, Vietnam’s National Assembly started a process of revising nearly 300 laws to ensure their compatibility with the BTA and international laws,” said Duc, saying this shows the deal’s significant impacts on Vietnam’s policymaking.

AmCham Chairwoman Foote added while the BTA has made a difference for Vietnam, “it also made a big difference in the US, of how to go from war to peace, and from enemy to friendship.”

“It was a very important process for both countries,” she stressed.

The book was jointly launched by the Economic and Urban Newspaper and Vietnam News Agency Publishing House, with financial support from AZ Vietnam.