The Hanoitimes – The restructuring aims to cut production costs and increase income for farmers.

Vietnam has gained positive changes in production and consumption of rice in its four-year project on restructuring rice industry, but there is still a lot of works to be done to achieve the goal of sustainable development and increase income for Vietnamese rice growers.

The statement was released at the conference on implementing the rice industry restructuring project until 2025, with a vision to 2030, which was organized by the Department of Crop Production, under the Ministry of Agriculture and Rural Development on December 25 in Ho Chi Minh City.

Speaking at the conference, Mr. Nguyen Nhu Cuong, Director of the Department of Crop Production said that some targets under the rice industry restructuring project such as ensuring food security, output and export turnover have been implemented. Meanwhile, others such as raising income for rice growers and building the national brand for Vietnamese rice still have not been fulfilled, he said.

Mr. Tran Xuan Dinh, technical consultant for the project, said that since the restructuring of rice production, although the paddy acreage has been declining year after year, production has remained stable at between 43 and 44 million tons per year. The sector has not only ensured food security, but also exports between 6 and 7 million tons of rice per year with a turnover of around US$ 3 billion.

Along with the reduction of the paddy acreage, the rice strain structure has changed positively, meeting the market demand. In the key rice production areas of the Mekong River Delta, the rate of using special aromatic rice varieties and high-quality rice increased from 2%-6%.

However, the rice restructuring strategy still has some issues, of which, the land use planning of each region has not been implemented thoroughly, the conversion from rice cultivated land to other crops is still slow; among others.

The productive organization lacks sustainability. The overuse of fertilizers and pesticides increases costs and negatively affects the environment. Sale of rice depends on traders with unstable prices and high risks, Mr. Dinh said. The quality of rice is not homogeneous, which affects the value and reputation of Vietnamese paddy.

To tackle the above limitations, the Department of Cultivation continues implementing the project in the direction of improving efficiency and sustainable development.

From the business view of point, the representative from Loc Troi Group shared his view that the rice industry restructuring is only effective when it helps cutting production costs and improving income for farmers.

Dr. Bui Ba Bong, former Deputy Minister of Agriculture and Rural Development, said that to effectively restructure the rice industry, it is necessary to synchronously implement three groups of solutions which are institutions and policies; science and technology development and investment in infrastructure. 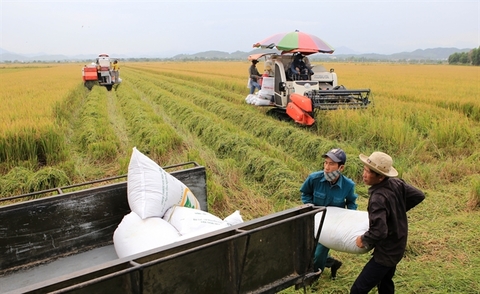 The total export turnover of the agriculture, forestry and fishery sector is estimated at US$3.49 billion last month, up 27.1 per cent over the same period last year, reported the Ministry of Agriculture and Rural Development.

The ministry will also continue to negotiate and remove trade barriers, open markets for Vietnamese agricultural products for official export such as fruits, aquatic and livestock products.

In particular, the Ministry of Agriculture and Rural Development also implements specific solutions to promote domestic consumption through the organisation of trade fairs to implement the campaign “Vietnamese people give priority to use Vietnamese goods”; promote and introduce key agricultural products, local specialities, businesses and cooperatives to consumers in big cities. — VNS 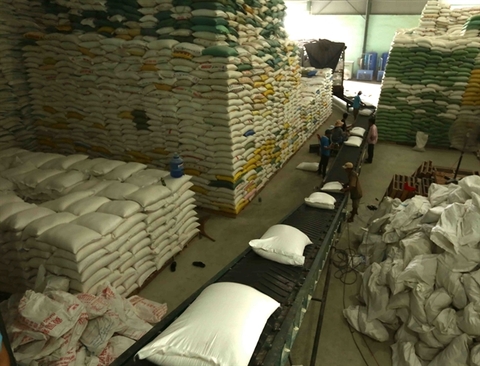 Rice for export being stockpiled at SongHau Food Company in Can Tho City. — VNA/VNS Photo Van Lanh

High hopes are pinned on Viet Nam’s rice exports in 2021 when major export markets such as the Philippines and Africa continue to sign contracts to buy rice from Viet Nam, while many others have great demand for fragrant rice and sticky rice – which are advantageous staples of Vietnamese enterprises.

The bilateral and multilateral free trade agreements between Viet Nam and other countries such as the EU-Viet Nam and the UK-Viet Nam FTAs with preferential tariffs would create favourable conditions for Vietnamese rice to compete with that from rival countries, the Viet Nam Food Association said.

According to the Vietnamese Trade Counsellor in the UK Nguyen Canh Cuong, rice shipments to the country this year will sharply rise against 2020. He added more UK firms will purchase Vietnamese rice under the UK-Viet Nam FTA, creating a chance for Vietnamese rice to expand its market share in the UK this year.

In 2019, rice exports from Viet Nam to the UK had a leap forward with a turnover growth of 376 per cent. That meant the UK has great potential as a rice export market for Viet Nam.

In order to tap into the advantages under FTAs, rice export giants such as Intimex JSC, Loc Troi Group, VRICE Co, Trung An High Technology Agriculture JSC are planning to seek new customers in markets where Viet Nam had signed FTAs, especially in the UK, baotintuc.vn reported.

The Ministry of Industry and Trade said it would provide rice export firms with information about the market demand situation in a timely manner while implementing trade promotion activities to help Vietnamese rice exporters better access customers.

Detailed information about the regulations and barriers under these FTAs’ commitments will be also offered by the ministry ​​so that businesses can improve their understanding and draw up suitable business plans.

As part of its efforts to facilitate Viet Nam’s rice exports, the VAF has built up online sales channel and participated in online trade seminars to develop the rice industry.

It suggested rice exporters focus on high quality products with good export results, ensuring food hygiene and safety to be able to enter fastidious markets such as Europe, America and Canada.

Experts have said that if Viet Nam wants to maintain rice export growth in 2021 it needs to focus on building a complete rice value chain and controlling quality in production, processing, and distribution.

According to the Ministry of Agriculture and Rural Development, Viet Nam’s rice output totalled 42.8 million tonnes in 2020, down about 0.2 per cent because of the shrinkage of some 192,000 hectares in farming areas. However, the productivity rose 50kg per hectare from a year earlier.

The areas of high-grade rice varieties have expanded to 74 per cent, compared to 50 per cent in 2015, as a result of the country’s efforts in improving the value of the Vietnamese rice.

Other outlets with significant export growth in 2020 were Indonesia, (nearly triple 2019’s figure) and China, up 93 per cent year-on-year.

Vice chairman of the VFA, Do Ha Nam described 2020 as a successful year for Viet Nam’s rice exports, which he attributed to increasing demand in many countries and the improved competitiveness of Vietnamese rice around the world.

Amid the difficulties posed by the ongoing COVID-19 pandemic, rice exporters quickly made appropriate adjustments and actively sought new markets while fully tapping into the advantages brought about by FTAs.

The EU-Viet Nam FTA had created a major opportunity for Vietnamese rice to enter European markets and then make inroads into other choosy markets, Nam said. — VNS 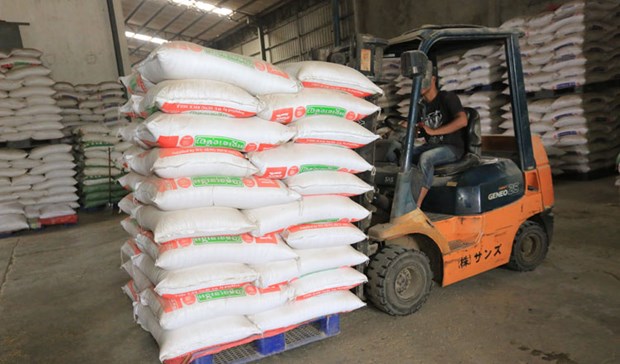 He made the remark while speaking to about 100 farmers and exporters during a recent contract-farming signing ceremony in Phnom Penh.

Rice exports for August and September fell nearly 30 percent each month, he said, explaining that Cambodian ports and customs are closed during holidays while other countries do not close theirs and imports and exports carry on as normal.

In August, Cambodia had a one-week holiday, a substitute for the postponed Khmer New Year break in April, which the government cancelled in an attempt to prevent the spread of COVID-19 .

The Cambodian government reduced the number of public holidays to 22 days starting from 2020 from 28 days last year.

The Hanoitimes – Vietnam is expected to export more than six million tons of rice this year.

“Such a high price indicates high quality of Vietnamese rice,” said Vice Chairman of Vietnam Food Association (VFA) Do Ha Nam, pointing out growing demand for rice from major markets, including the Philippines, as a key factor for higher prices.

Since the beginning of 2021, major rice buyers of the region, including China, Bangladesh and the Philippines are importing a large amount of rice. Meanwhile, Thailand, one of the world’s largest rice exporters, could see its export volume reduced this year given an appreciation of the Bath value.

Tran Thanh Hai, deputy director of the Ministry of Industry and Trade (MoIT)’s Import and Export Department, expected the current Covid-19 situation would be a major factor keeping high demand for rice in the global market.

As of January 18, the MoIT has issued rice export licenses for 205 traders.

The Hanoitimes – In 2021, the trade ministry eyes an increase of 4-5% in trade turnover from an estimated US$543.9 billion last year.

A surge of nearly 20% year-on-year in export turnover in the first half of January to US$12.9 billion signal a bright outlook for Vietnam’s exports this year.

Statistics from the General Department of Vietnam Customs (GDVC) revealed in the first 15 days of 2021, Vietnam recorded four groups of export staples with turnover of over US$1 billion, one group more than in the same period of last year. This newly-included group was machinery and equipment, which posted an export turnover of US$1.45 billion, up 72% year-on-year.

Rice, one of Vietnam’s major agricultural export products, received positive news when the Ministry of Agricultural and Rural Development (MARD) held a ceremony on January 13 marking the export of Vietnam’s first batch of rice in 2021 by Trung An Hi-tech Farming Company, located in the southern city of Can Tho.

This special shipment with volume of 1,600 tons will be delivered to Malaysia and Singapore, those among Vietnam’s top 10 rice buyers.

On top of that, Trung An is preparing to deliver an order of nearly 2,000 tons of rice to Germany.

Meanwhile, local traders are preparing for the export of seafood and fruits to the EU, US, Japan, Canada, Australia and China to take advantage of the EU – Vietnam Free Trade Agreement (EVFTA) and the Regional Economic Comprehensive Partnership (RCEP).

The Ministry of Industry and Trade (MoIT) attributed a number of factors to the positive export outlook for Vietnam in 2021, including recent trade deals (CPTPP, EVFTA, RCEP, UKVFTA) that Vietnam is a member of, an ongoing shift in investment capital from regional countries to Vietnam, and the formation of new global supply chains.

Minister of Industry and Trade Tran Tuan Anh said to support the realization of Vietnam’s GDP growth target of 6.5% in 2021, the industry sector would aim at an expansion of the index of industrial production (IIP) at 8% year-on-year, and trade turnover to grow by 4-5%.

On the other hand, the Ministry of Industry and Trade (MoIT) would provide firms with updated information on issues that could impact export activities, such as changes in import policies, technical trade barriers, and risks in payment, he added.

“It is essential for Vietnamese enterprises to take on IT and e-commerce to expand their reach to export markets,” he noted.

Vice Minister of Industry and Trade Do Thang Hai said one of key priorities at the moment is to enhance local traders’ resilience against the Covid-19 pandemic, while providing supports for enterprises for effective utilization of preferential treatments from FTAs.

Chairman of the Vietnam Chamber of Commerce and Industry (VCCI) Vu Tien Loc said the MoIT should play an active role in ensuring the effective implementation of FTAs.

In 2020, Vietnam recorded trade turnover of US$543.9 billion, representing an increase of 5.1% year-on-year. This resulted in an all-time high trade surplus of US$19.1 billion, far exceeding the previous record figure of US$10.9 billion one year earlier.