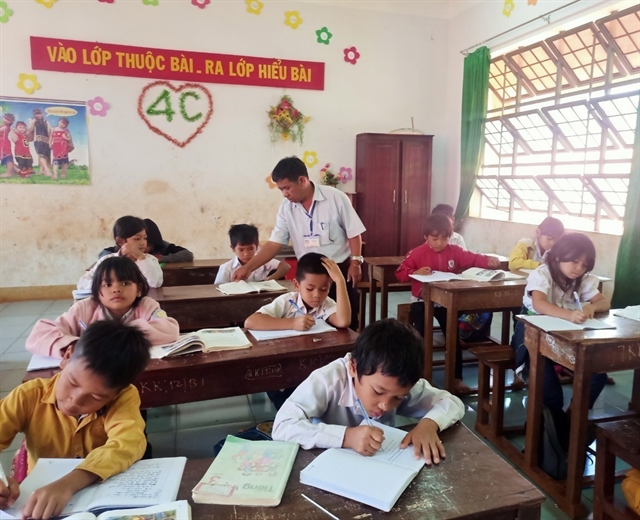 GIA LAI — In Krêl Village in Đức Cơ District of Gia Lai Province in the Central Highlands, one ethnic minority member stands head and shoulders above the rest.

Rơ Mah Chel is a inspiration to his peers and has gained the trust and respect of all those around him.

Together with the head village and local authority, he has helped residents improve their education, change the old habits, and apply advanced techniques in cultivation and husbandry to get out of poverty.

He is also the person who informs people of the Government’s policies and conveys their aspirations to the local authority.

Chel has been a teacher since he was 20. He chose the career as he believed that knowledge would change his life and he could help his villagers improve theirs too.

Chel said he started his job when the village was quite poor and underdeveloped. He had to go to every students’ house to persuade their parents to let the kids go to school. In the morning, he came and picked up the students and took them home, even continuing lessons late into the night.

Years have gone by and some of his students have become officials with the local authorities. He is still dedicated to the job at Võ Văn Kiệt Primary School in Ia Dơk Commune in Đức Cơ District.

Among few literate people in the village, Chel read books on techniques of cultivation. He realised that the land of his village was nutritious, but the crops’ productivity remained poor due to people’s lack of knowledge and old fashioned habits.

He decided to be the pioneer to change people’s cultivation techniques. He took courses on coffee and rubber planting and applied these methods himself.

After the first year, he had earned nearly VNĐ300 million (US$13,070) from two hectares of rubber trees, one hectare of coffee trees and more than 100 pepper trees. After several years, he built a new house much to the surprise of local residents.

People rushed to his home to ask for advice and Chel was happy to share his knowledge and experience with the villagers. The more he shared, the more he gained their trust and respect.

It was time for Chel to make revolution in changing people’s bad habits. He taught them to cook and preserve food properly. He told them to move the animal farm far away from the residential areas. He encouraged them to eliminate old habits and apply new technology in cultivation to improve the productivity.

Chel is also the person to give mediation for local couples and young people. He is enthusiastic about preserving the traditional culture of the Central Highland. Chel opens free gong classes to teach the young generation how to play musical instruments and contributes to rebuild the traditional Rông community houses in the village.

He was among reputable and knowledgeable person dedicated to the cultural preservation of the ethnic minority in the locality. — VNS

The Hanoitimes – Effective implementation of the OCOP program helps localities realize their potential in economic development and promote tourism, said a local official.

To date, Hanoi has set up nine showrooms across the city to promote and sell products under the national’s One Commune One Product (OCOP) program, with a view to honoring prominent craft villages’ goods. The showrooms not only help bring high quality products to local customers, but also contribute to economic development in rural areas.

The showroom is located within an area known as the Quintessence of the Vietnamese craft village of Quang Vinh Pottery Company in Bat Trang commune, which showcases Hanoi’s unique craft products, such as those made from porcelain, pottery, rattan or bamboo.

Mr. Hong added the district is home to five craft villages, including the well-known Bat Trang village. In 2019, 19 products from the district were qualified as OCOP products, including pottery and porcelain items, fresh vegetables and processed food.

Vice Director of Hanoi’s Department of Industry and Trade Tran Thi Phuong Lan said in 2019, Hanoi has around 301 products rated by OCOP with three stars and above. This year, it is estimated an additional 800 products would be classified with three star-rating and above, requiring more OCOP showrooms to be set up.

To realize this goal, the department is cooperating with a number of districts, including Ha Dong, Gia Lam, Quoc Oai, and Son Tay, among others, as well as shopping malls, and supermarkets to set up OCOP showrooms and promote craft and agritourism.

Ms. Lan said the department targets to have 60–70 OCOP showrooms in 2021, which would form a distribution network of OCOP products and expand its market shares in the city. 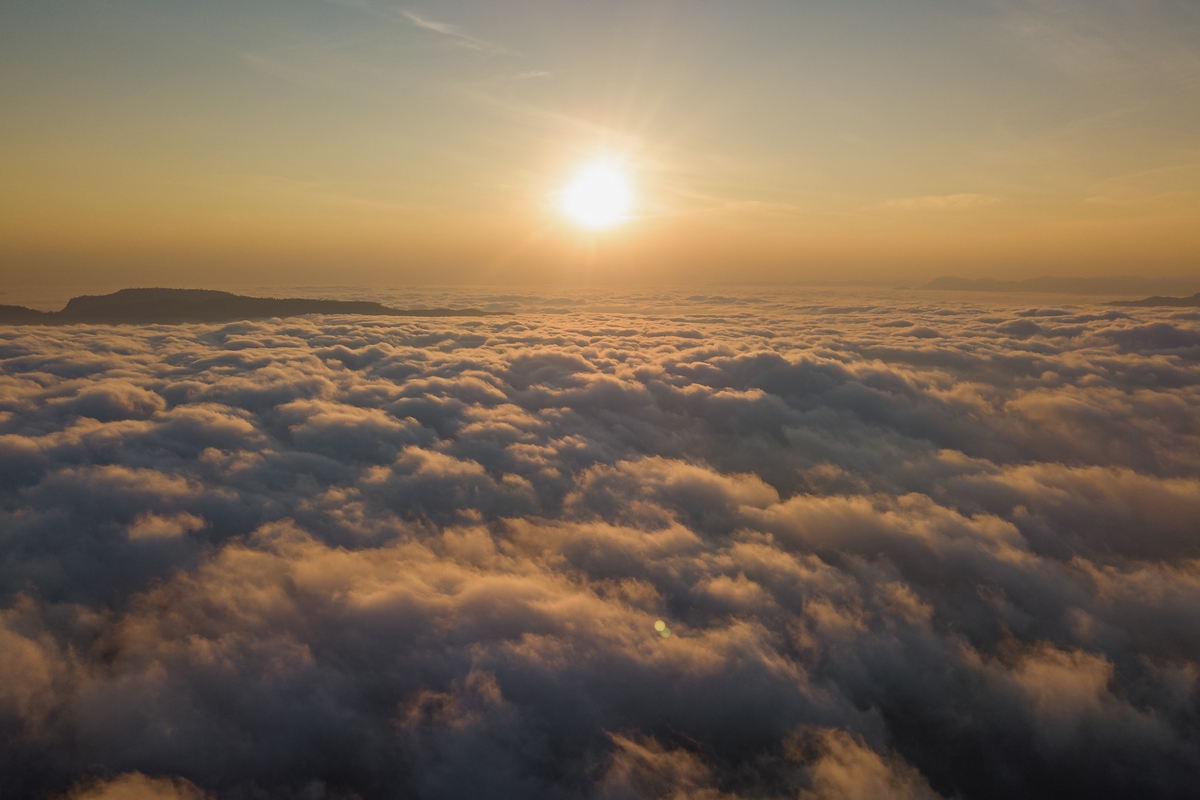 Mang Den in Konplong District, Kon Tum Province is considered the “second Da Lat” of the Central Highland due to its immense pine forests, chill climate and spring cherry blossoms.

The town is located at the end of Violet Pass with beautiful roads meant for exploring. Lucky visitors reaching the top of the pass early in the morning can enjoy an ocean of ​​clouds and a beautiful dawn. 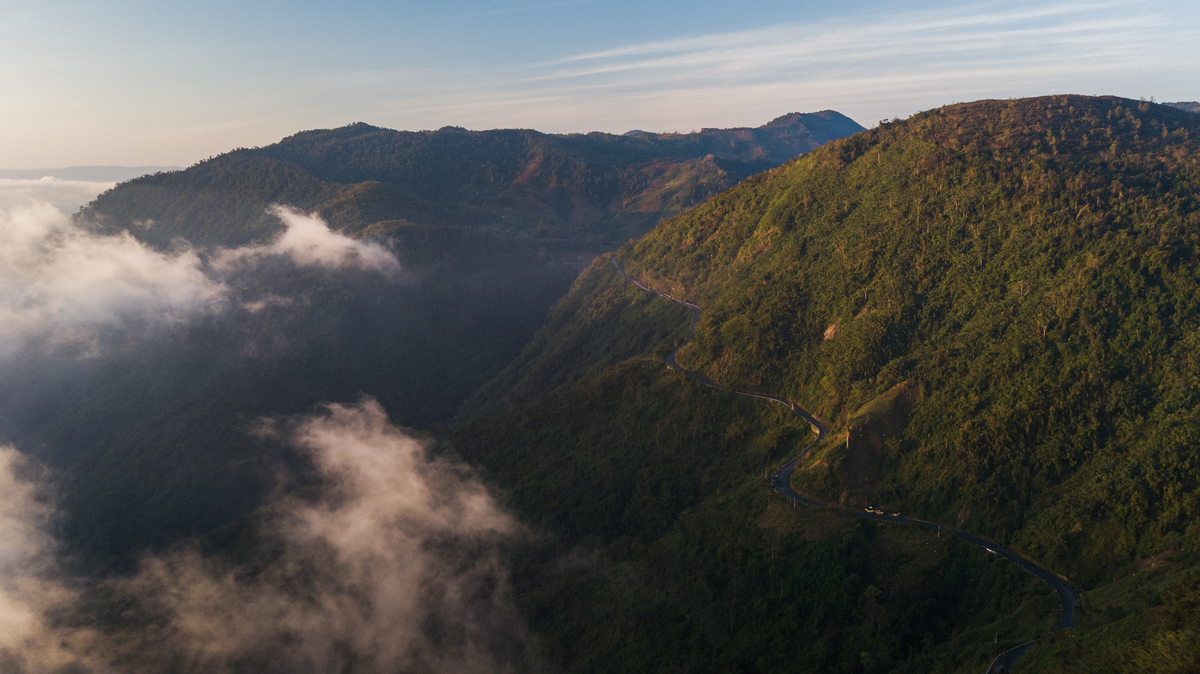 Sunrise is the most epic time to take photos here. 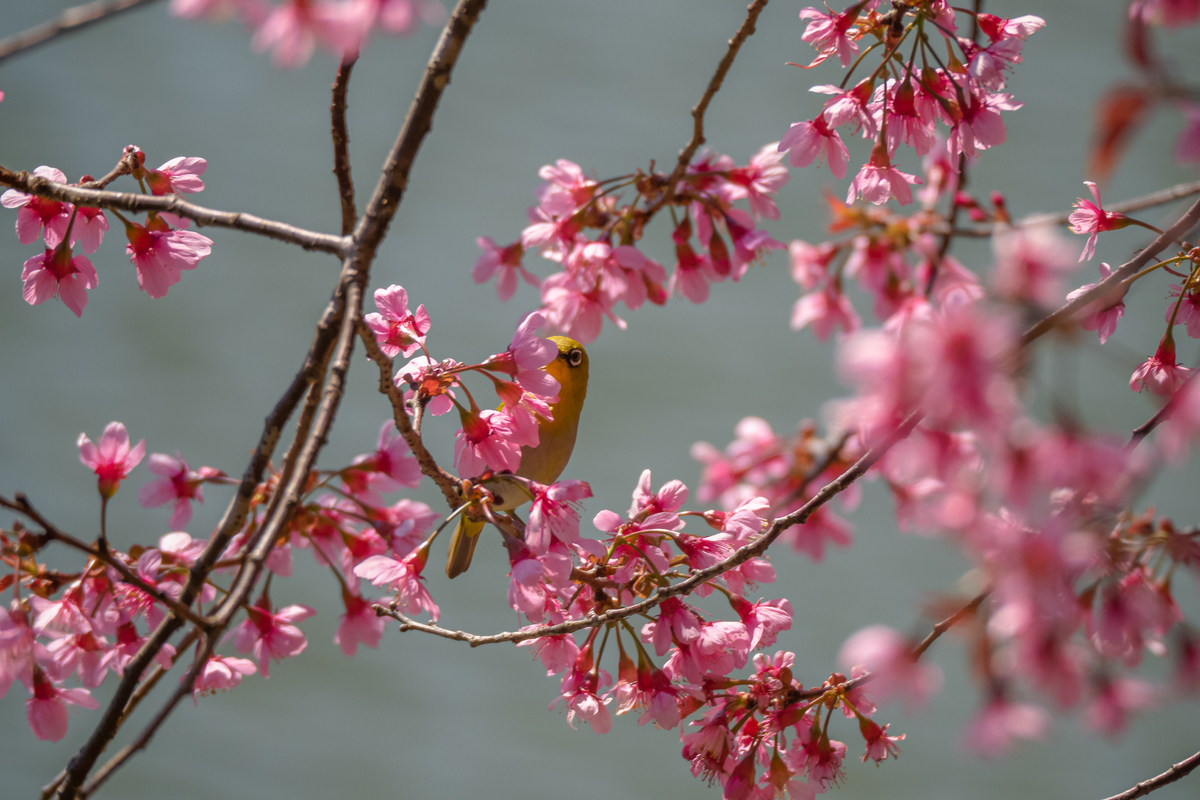 When spring arrives in Mang Den, temperatures drop to around 14 degrees Celsius with warm sunshine. This is when cherry blossoms enter bloom.

Cherry blossoms have appeared in Mang Den since 2010, with the number of trees estimated at 20,000. Located at an altitude of 1,200 meters, the local climate is well suited to the cultivation of this tree. Flower season lasts about over a month, usually from January to early March. 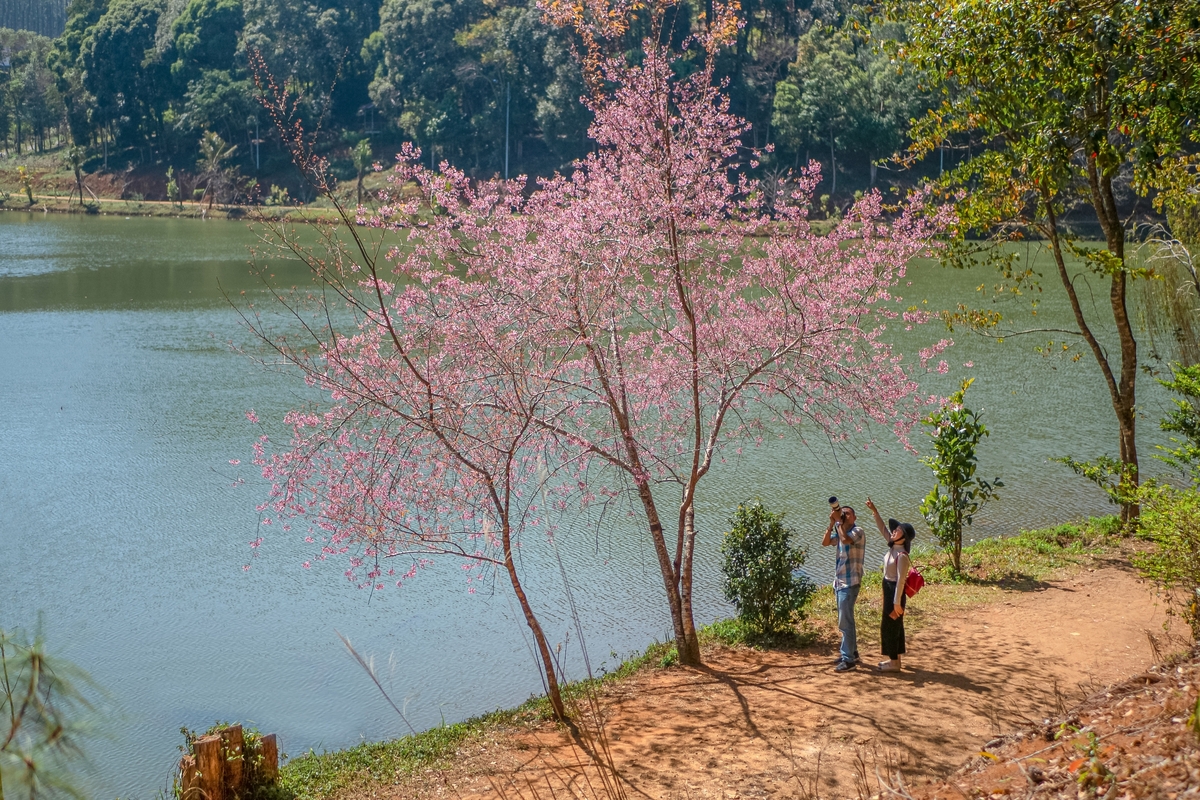 Visitors pose for photos under the cherry blossoms by Dak Ke Lake.

Nguyen Thu, a photographer from Quang Ngai Province said: “I like to travel in Mang Den since the climate is like Da Lat and the spring here is equally brilliant.” 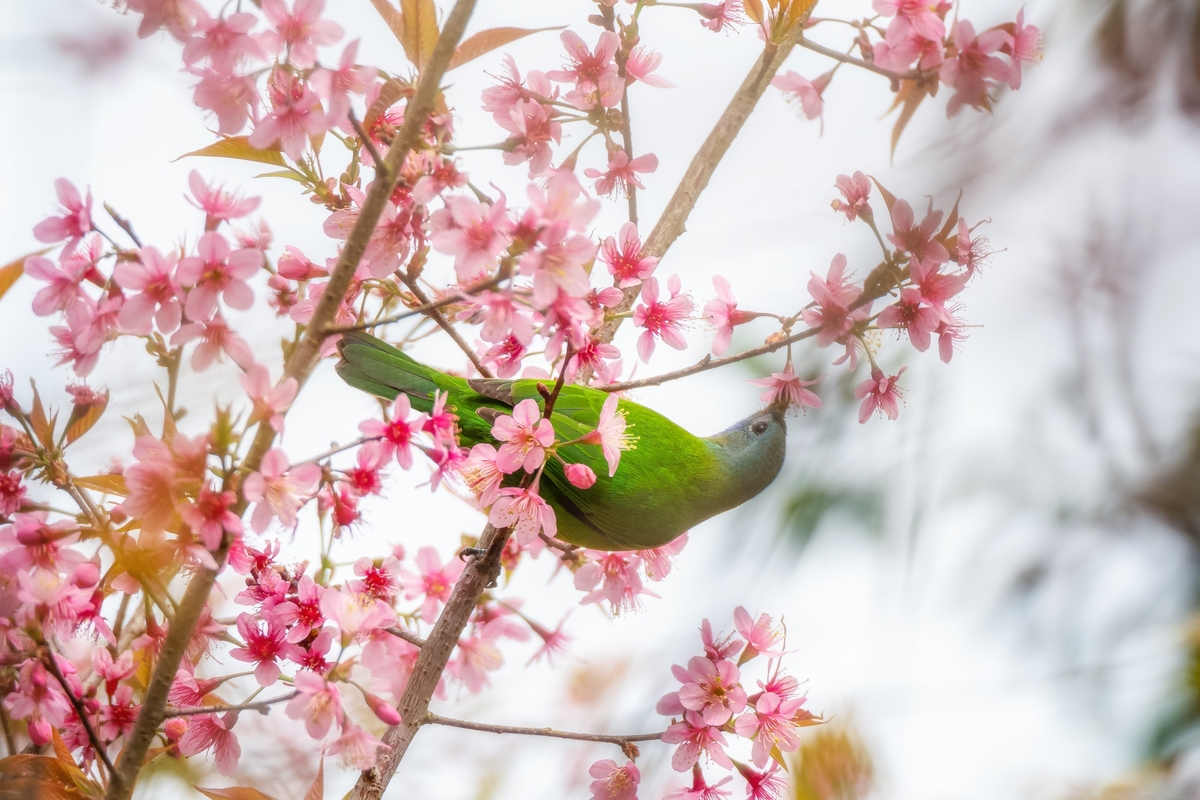 The cherry blossoms attract a lot of bees, butterflies and especially wild birds here to feed on their nectar. 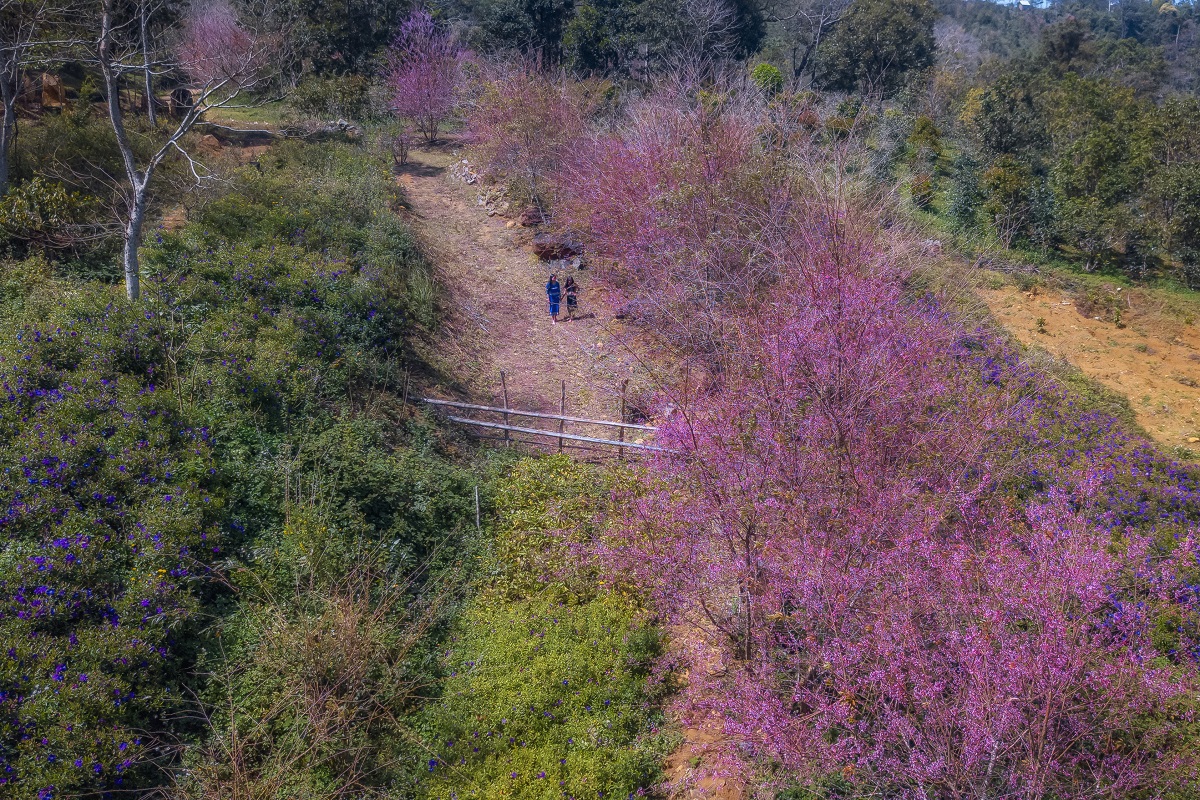 Cherry blossoms are widely planted in residential areas, like at this flower garden in Y Trang. 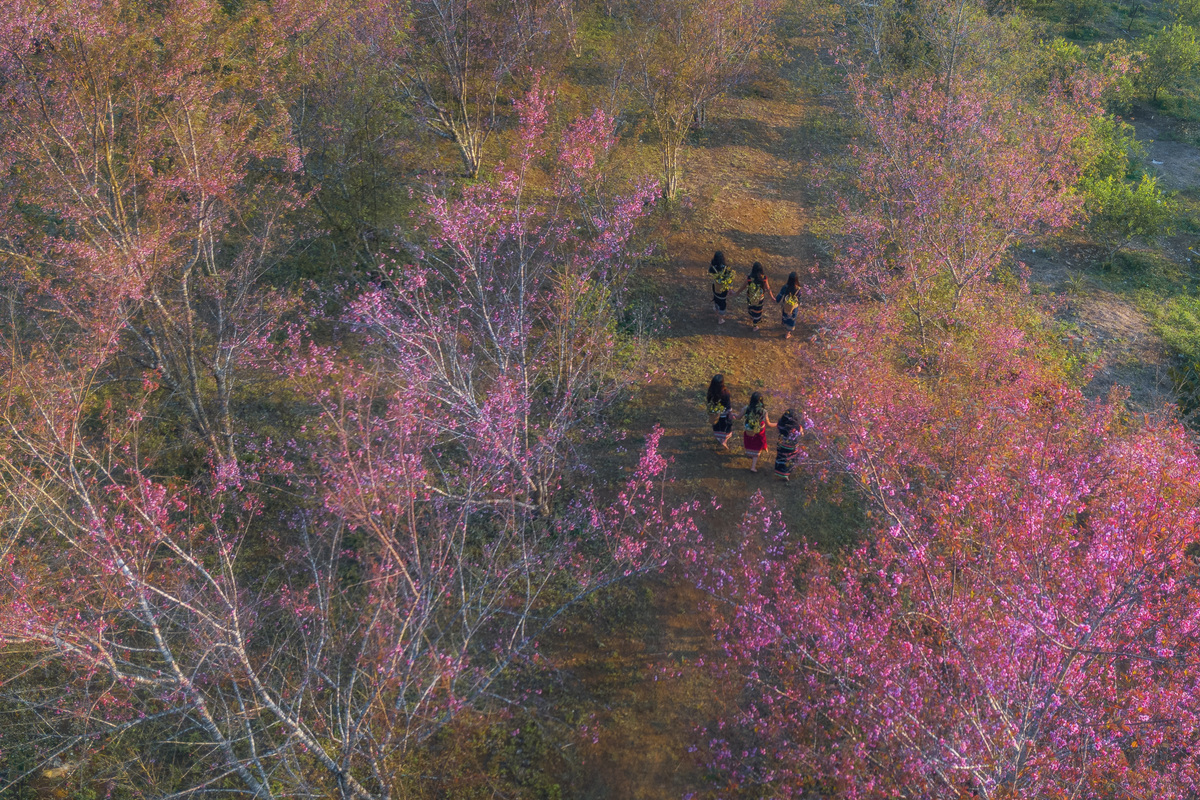 Bahnar, Xo Dang, and H’re ethnic girls from a nearby boarding school stroll through a flower garden. 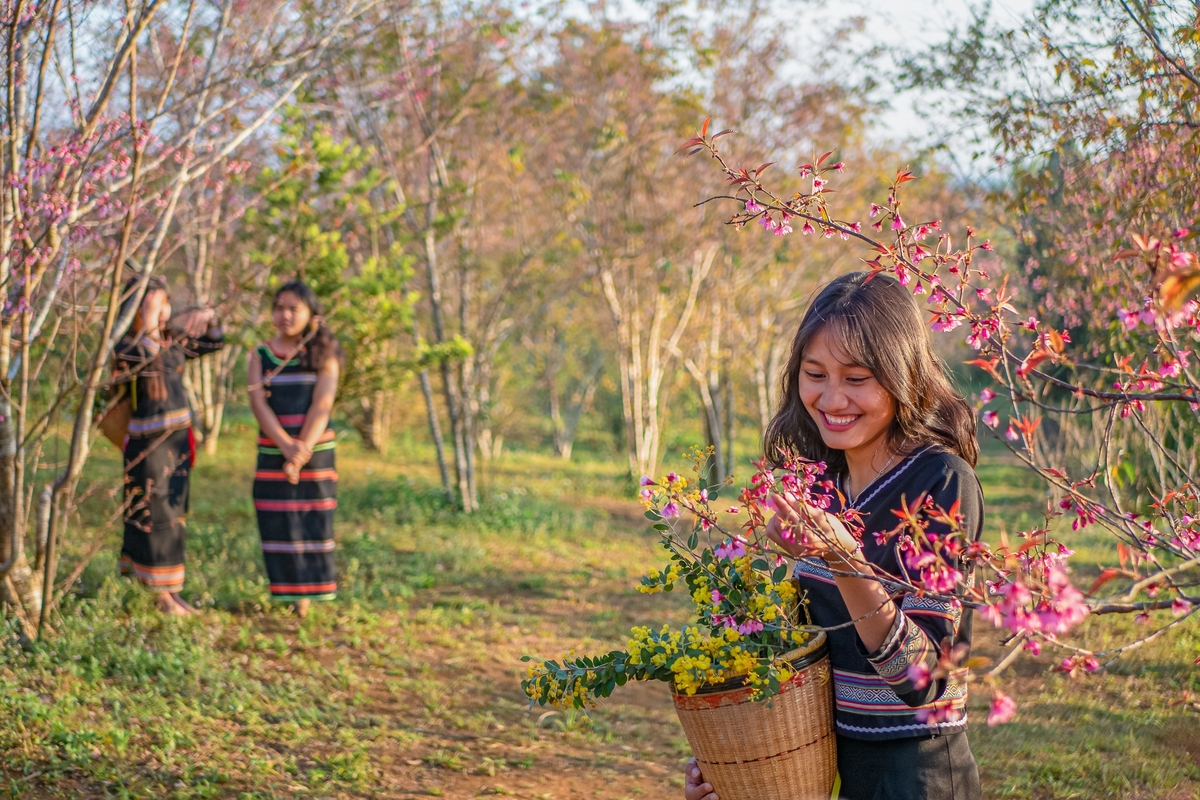 Ethnic women pose next to cherry blossoms with bright smiles. 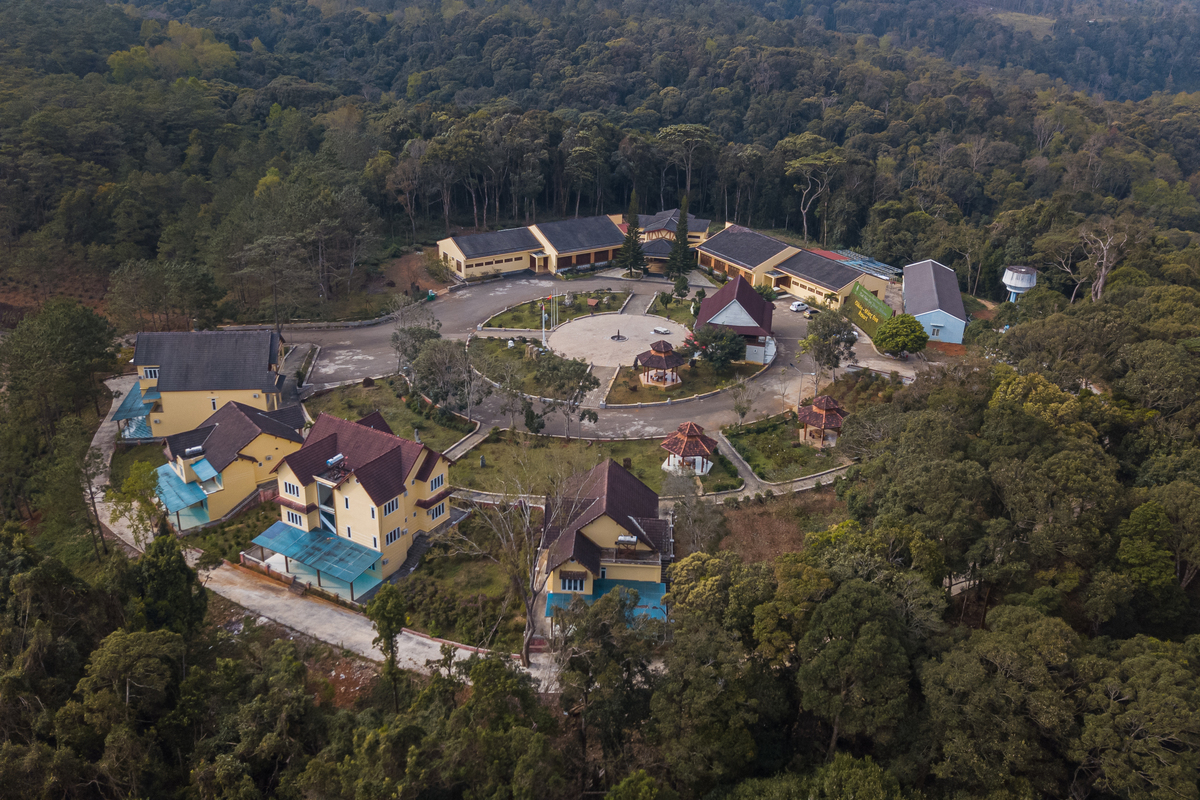 In addition to homestays and garden houses, visitors in Mang Den can choose between hotels and luxury accommodation facilities.

In the photo is a resort located near Dak Ke Lake. 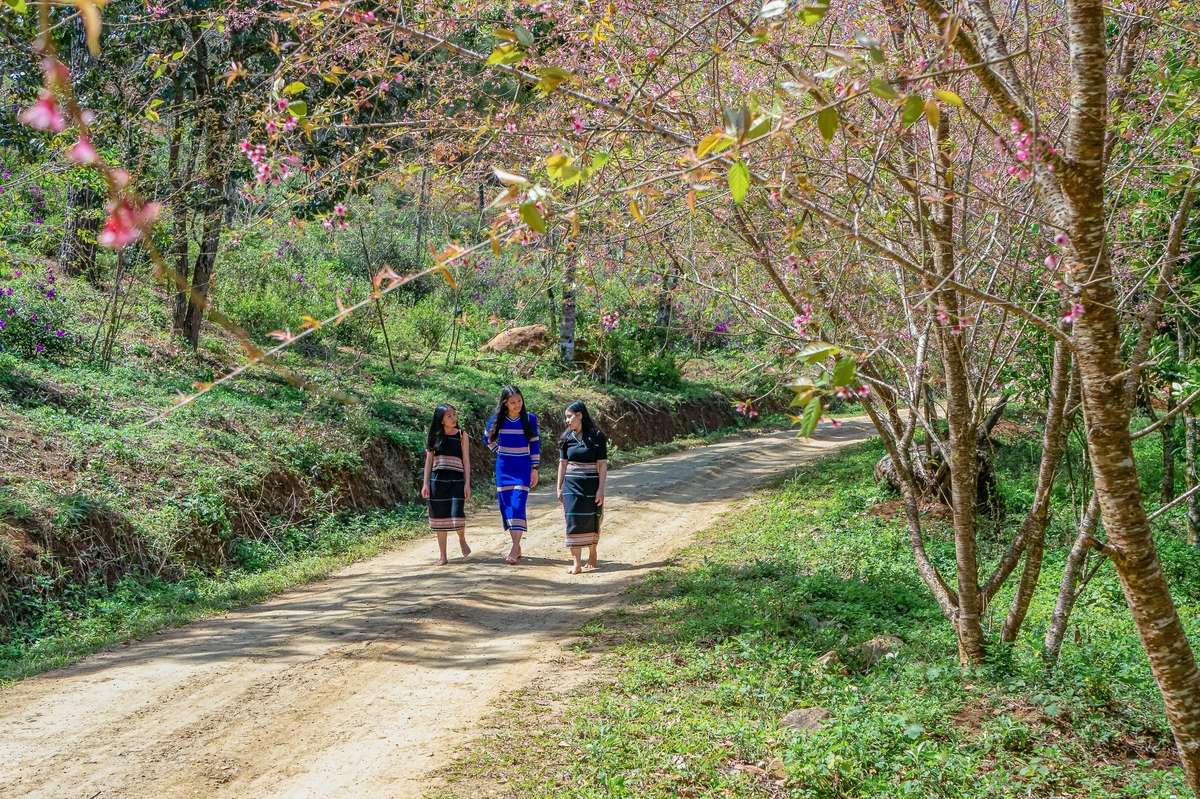 Tourists can dress up in rented colorful ethnic brocade while exploring their surroundings. 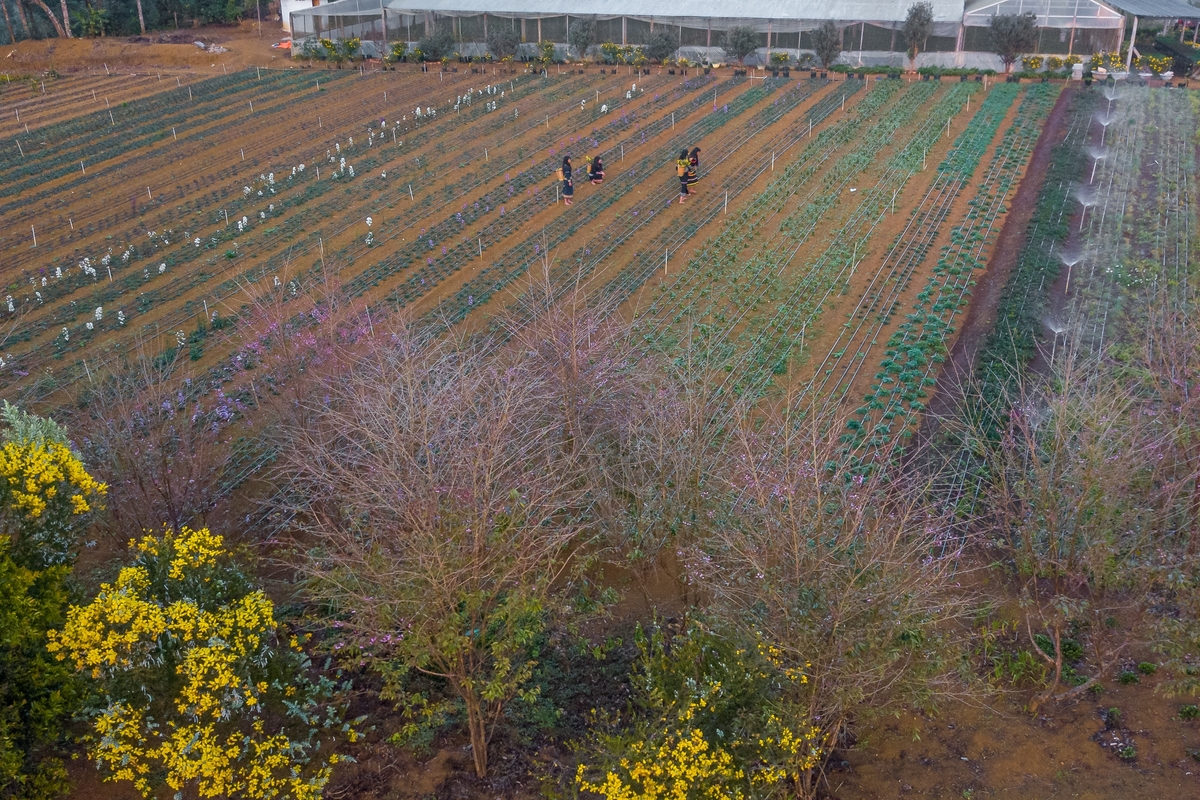 Visitors can also admire the beauty of golden mimosa trees, or enjoy ripe and juicy strawberries.

The Hanoitimes – The city’s authorities will promote production of handicraft products.

Hanoi will set up 30-40 new showrooms displaying and selling products developed under the national One Commune One Product (OCOP) program.

This is an important target mentioned in the city’s plan on the development of OCOP showrooms associated with craft village tourism in Hanoi in 2021.

Under the plan, the city’s authorities will promote production and sale of handicraft products, especially OCOP products, typical rural industrial items, and those with market potential in the capital, provinces and cities nationwide.

According to the plan, each district/town will have two operating OCOP showrooms or more.

The municipal People’s Committee will conduct a survey to find locations of OCOP showrooms according to regulations.

The committee has also required departments and localities to inspect and supervise the operation of OCOP showrooms opened in 2020 and 2021, organize promotional programs to enhance the consumption of quality products, including those from provinces and cities nationwide.

As of 2020, Hanoi had completed a similar process for 630 OCOP products achieving 3-star rating and above.

The city targets to complete the evaluation and classification for at least 2,000 OCOP products by 2025, Director of the municipal Department of Agricultural and Rural Development Chu Phu My told a conference taking stock of the OCOP program last year. In the coming time, the city will continue to push for greater efficiency in the implementation of the program.

The Hanoitimes – To date, Hanoi has completed a similar process for 630 OCOP products achieving 3-star rating and above, exceeding the target of having at least 500 OCOP products.

For the next five years, Hanoi targets to complete the evaluation and classification process for at least 2,000 products under the national’s One Commune, One Product (OCOP) program.

Director of the municipal Department of Agricultural and Rural Development Chu Phu My announced the plan at a conference taking stock of the OCOP program in 2020 on December 25.

To date, Hanoi has completed a similar process for 630 OCOP products achieving 3-star rating and above, exceeding the target of having at least 500 OCOP products.

Along with the development of OCOP products, Hanoi has launched 13 OCOP showrooms in the city and organized four OCOP trade promotion events for products from northern mountainous, Red river delta, central highlands, and southern region.

Vice Chairman of the Hanoi People’s Committee Nguyen Manh Quyen said in the coming time, the city will continue to push for greater efficiency in the implementation of the OCOP program.

“Hanoi is expected to continue cooperating with other provinces/cities in promoting trade and taking the OCOP products from all over Vietnam to distribution channels,” he noted.

The OCOP program, with a view to honoring prominent craft villages’ goods and products, has been identified by Hanoi’s authorities as one of the solutions to boost domestic consumption at a time when the Covid-19 pandemic is causing severe consequences on the local economy.

The Hanoitimes – Covering an area of 100 square meters at the Agricultural Trade Promotion Center, the store sells over 400 OCOP products and goods from 15 provinces and cities, including clothes, beverages, vegetables, and furniture.

Hanoi’s Department of Industry and Trade on November 18 launched a new store to promote and sell products under the One Commune, One Product (OCOP) program in Bac Tu Liem district.

It is located at the Agricultural Trade Promotion Center at No.489 Hoang Quoc Viet street, Bac Tu Liem district.

Covering an area of 100 square meters, the store sells over 400 OCOP products and goods from 15 provinces and cities, including clothes, beverages, vegetables, and furniture.

In parallel with the launch of new stores, the trade department is carrying out the Hanoi Promotion Month 2020 to boost domestic consumption in the post-Covid-19 period, in which hundreds of thousands of products are offered with steep discounts of up to 70%.

In the first ten months of 2020, revenues from retail sales in the city expanded by 9.7% year-on-year. The municipal Department of Industry and Trade targets growth of 10.5% this year.