The delegation visited the family of late Vietnamese heroic mother, Bui Thi Me, former Deputy Minister of Health; and Hero of Labor and former Deputy Minister of Health, Doctor Doan Thuy Ba.
Leaders commemorated late Vietnamese heroic mother, Bui Thi Me who made great contributions to the health sector of the country.
On behalf of city’s leaders, Mr. Nen conveyed his best wishes to her family and hoped that members will continue to develop meaningful family traditions.
He also expressed his profound gratitude to Doctor Doan Thuy Ba who is one of the typical health-care workers for her dedication to the healthcare field and revolutionary cause, and sent the best wishes to the doctor’s family. 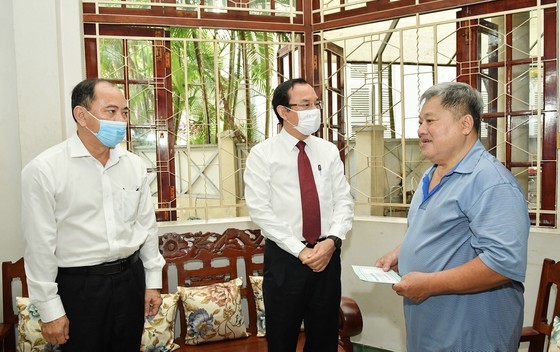 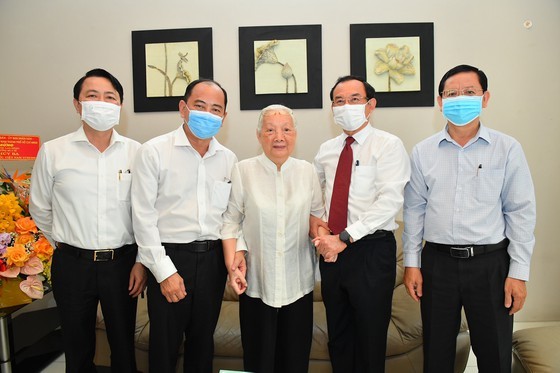 By Thanh An – Translated by Kim Khanh

Unfinished connection from Vo Van Kiet Street to National Route 1A
One of the most frequently congested areas is the Nguyen Van Linh overpass – National Route 1A, the intersection linking HCMC and cross-region highways which receive insane traffic each day.
As a result, some narrow sections of these streets have become degraded faster, making the traffic jams and air pollution more severe.
IDICO, a prominent urban development company, in the past proposed a BOT project to get funds for upgrading the National Highway running through An Suong – An Lac, involving expanding the road to accommodate four car lanes and two mix-traffic lanes. The project was worth VND1,880 billion at the time (about US$81.5 million, but never came to fruition due to administrative complications.
Besides the aforementioned locations, many other sections along major highways cannot meet the increasing traffic volume such as sections on national routes 1A and 50, Dinh Duc Thien Street and others, which are also hotspots of traffic collision.
According to leaders of Binh Chanh District, the locality will focus on external traffic and upgrade main roads, parallel roads, and bypasses to relieve congestion.
From now to 2025, the district proposes to invest in upgrading and expanding 30 road projects and building 31 new ones with a total length of some 86km.
On a municipal level, HCMC Department of Transportation is constructing a project for the period of 2020 – 2030 to develop all 4 gateway areas of the city, as well as upgrading the roads connecting Nguyen Van Linh Street to Ho Chi Minh City – Trung Luong highway.
The city also determines to solve traffic problems before approving more apartment complex projects in these areas.

Accordingly, around 41.95 percent of the enlistees hold intermediate level, college and university degrees and 2.5 percent of them are party members.

In order to ensure strict implementation of the Covid-19 pandemic prevention and control measures, most of enlistees will be taken samples for SARS-CoV-2 testing before the enlistee handover ceremonies on March 3.

Major General Nguyen Van Nam praised activities and practical programs of the party committees and authorities at all levels for recruitment such as granting saving books and gifts to recruited soldiers, supporting enlistees’ families with difficult circumstances with the total funds of nearly VND6 million (US$260) a person.

Amidst the current complicated Covid-19 pandemic situation, the enlistee reception and handover ceremonies in localities are recommended to take place quickly with athe maximum time of 20 minutes as well as minimize their relatives in seeing off ceremonies, emphasized Mr. Nam.

An inspection team for pandemic prevention led by Quang Ninh Provincial Party’s Committee Secretary, cum Chairman of Provincial People’s Council, Nguyen Xuan Ky made a survey in the aiport on February 20.
The province’s leader highly appreciated the aiport’s efforts to control the pandemic and reduce the spread of Covid-19 to get ready for reopening.
He asked Van Don Airport’s leadership to continue to strictly implement prevention measures to ensure the safety of passengers and employees.
After reoperation, the airport plans to resume routes connecting Van Don and HCMC to meet passengers’ travel demand as well as receive repatriation flights for Vietnamese citizens and foreign specialists to enter Vietnam to work.
After arriving at the aiport, passengers on flights carrying experts are required to submit health declaration form, take temperature checks, wash their hands, wear masks and keep a safe distance. After completing entry procedures, arrivals will be sent to quarantine facilities.
Travelers on commercial flights have to implement online health declaration, take temperature checks, wash their hands and wear masks. The disinfection of terminals and high-touch surfaces is carried out daily
Dozens of employees at Van Don International Airport were found infected with the novel coronavirus because they were linked to the 1,553rd patient who is an employee of the airport.
Prime Minister Nguyen Xuan Phuc decided to close down Van Don Airport for 15 days after many locally-transmitted cases of COVID-19 were confirmed.
On January 28, Minister of Transport signed a decision on shutting down the airport from midday on January 29 to midday on February 13. The CAAV then proposed the Ministry of Transport to extend the closure of the airport until February 21. The Civil Aviation Authority of Vietnam (CAAV) then suggested that the airfield should be extended its closure from 12:01 p.m. on February 21 to 6 a.m. on March 3 to prevent further spreading of Covid-19. 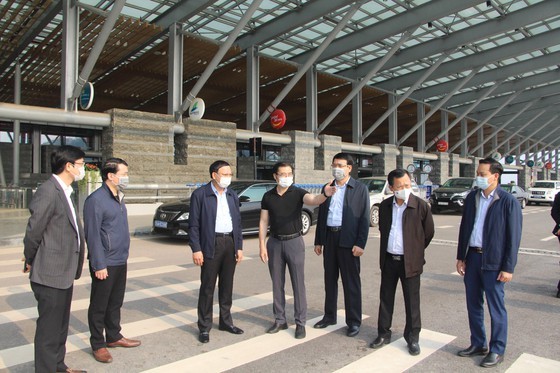 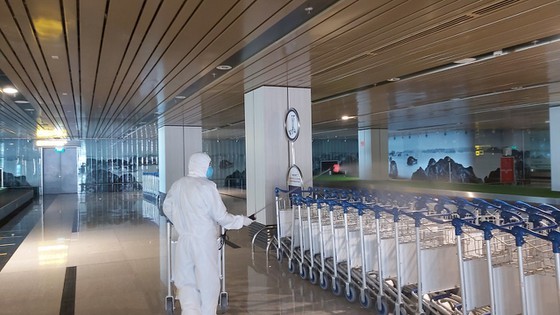 A worker is disinfecting a terminal.

By P.Nam – Translated by Kim Khanh

“Patient 2424” is a 24-year-old woman from Thoi Lai District, Can Tho City, who entered Vietnam illegally through the border at Hong Ngu District, Dong Thap Province on February 23 and was quarantined soon after. Her test results returned positive for the novel coronavirus on February 25.

Thirty-five volunteers in Hanoi and 38 in southern Long An Province were divided into four groups for the second phase of human trials of Nanocovax, a Vietnamese Covid-19 vaccine produced by Nanogen Pharmaceutical Biotechnology JSC.

Groups would be injected with placebos, as well as 25 microgram, 50 microgram and 75 microgram doses each. Volunteers would not know which type of shot they received.

Following their shots, all volunteers would be monitored for 60 minutes. Afterwards, they would be medically monitored by local authorities at home.

Nhu, 36 and a teacher, was one of the first Covid-19 vaccine trial volunteers during the first phase commenced last year. She said her health so far has been very good, and she has formed a Facebook group to counsel those who wish to participate in the trial’s second phase.

Nhu participated in the second phase Friday too.

“I’m the evidence to prove the success of the trial vaccine, and I’m very proud,” she said.

Dan, 63, said she had known of the vaccine trials weeks ago. After much consideration, she signed up to participate in the second phase.

“At my age, there could be risks and complications if I’m infected. As such, I want to take active care of my health and joined this phase of vaccine trials,” she said, adding she would recommend her neighbors as well.

Another 52-year-old man in Long An said he had “absolute trust” in the Vietnamese Covid-19 vaccine. He had arrived at the injection site at 7 a.m. for his shot.

“I’m not worried at all; instead I feel happy and proud to contribute to our medical field,” he said.

A total 560 people in Hanoi and Long An would be involved in the second phase of the Nanocovax human trials, in collaboration with Vietnam Military Medical University and HCMC Pasteur Institute. Nearly 200 people in Hanoi had been screened as vaccine trial volunteers Wednesday and Thursday, with 100 more screened Friday.

The first phase, which commenced last December with 60 volunteers, revealed Nanocovax to be safe, immunogenic and causing no severe side effects, said Do Quyet, director of Vietnam Military Medical University. Preliminary results also showed antibodies produced by Nanocovax had an effect on a coronavirus variant originating from the U.K., which is up to 70 percent more transmissible than ordinary strains, he added.

The second phase would allow researchers to see how exactly immunogenic Nanocovax is. Volunteers for the second phase could now include those aged 65 and above, along with those with underlying, non-severe conditions like hypertension and diabetes, according to the National Research Ethics Committee.

Preliminary results for the second phase should be expected within May, said Quyet. Afterwards, the Ethics Committee and the Ministry of Health would determine the most optimal doses for the third phase.

“If everything goes well, preparations for the third phase could begin by May. In this phase, the number of volunteers could reach between 10,000-15,000,” said Quyet.