The Standing Committee of the National Assembly (NA) has agreed to extract VND12 trillion ($520.44 million) from an amount of VND64.76 trillion, which Vietnam has saved from last year’s spending, to buy vaccines.

The NA’s Finance and Budget Committee said it is necessary to serve an urgent issue, and complies with State Budget Law.

Besides, the government has also asked for the NA’s approval to use a sum of VND1.237 trillion left from a pandemic prevention fund for 2020 of the Ministry of Health to buy vaccines.

The Finance and Budget Committee said the government proposal is reasonable given the complicated, unpredictable development of the Covid-19 pandemic.

However, since the State Budget Law does not allow such a sum to be transferred from one year to the next, a final decision would be taken at the coming NA meeting in July.

Vietnam has secured a deal to have Vietnam Vaccine JSC (VNVC) buy 30 million doses from British-Swedish firm AstraZeneca. Of these, 117,600 doses have been delivered.

Through the Global Covid-19 Vaccine Facility (Covax), Vietnam will be provided 38.9 million doses of the vaccine.

The Health Ministry last month said local firms were in talks with companies in the U.S. and India for diversification of vaccine sources as Vietnam seeks to obtain a total 150 million doses this year to immunize 70 percent of its population.

The nation is also developing four Covid-19 vaccines in various stages of testing.

Besides frontline medical workers, medical staff, the military, and police, Vietnam’s priority list for Covid-19 vaccination includes teachers, diplomatic personnel, customs and immigration officers, those working in essential services like transport, people aged 65 and above, the poor, and those with chronic diseases.

People seeking to study or work abroad or living in pandemic-hit areas are also on the list.

The ministry has reported the nation now has 19.4 million people in priority groups, with Ho Chi Minh City accounting for the most at 1.56 million.

Demand for the free vaccine among priority groups, however, could be lower than expected because some are reluctant to receive it following global reports of side effects, the ministry noted.

Vietnam needs to stay vigilant before the looming threat of new coronavirus outbreaks coming from beyond its border, even during an ongoing vaccination campaign, Kidong Park, the WHO representative in Vietnam, said Tuesday.

“The risk of case introduction to Vietnam including onward community transmission is high especially if cases among the illegal incoming travelers go undetected,” Park said.

Cambodia has been in the grip of a new wave since late February. Its caseload has crossed 11,700, after recording only around 400 cases the whole of last year.

The Lao government last Friday closed the country’s borders and announced a two-week lockdown in capital Vientiane. On Monday, the country recorded 113 new cases, its highest single-day tally. There were 93 new cases on Wednesday, taking the national infection toll to 604.

Despite Vietnam’s successful record in the coronavirus fight, the recent surges in certain countries including India show that the crisis can worsen anytime and there’s still a “long way to go as a global community,” he said.

Globally, 5.7 million cases and 88 000 deaths were reported to WHO last year.

“We are nearing 150 million cases of Covid-19 and 3.1 million deaths since the start of the pandemic. These are worrying trends as we continue to see the impact of variants, opening up of societies, and inequitable vaccine rollout,” Park said.

In Vietnam, the public needs to be kept informed of the risks and public health measures to be adhered to, even as a national Covid-19 vaccination program is being rolled out, he advised.

The government also needs to be alert and active in risk assessment, preparing for possible resurgence of cases by ramping up border surveillance and control, setting up field hospitals in areas close to the border and advising its citizens in other countries to avoid illegal entry, among other measures, he added.

Vietnam has not recorded any new community transmission in over a month, but officials have been warning that the threat of another Covid-19 outbreak is imminent, especially via illegal entrants. Residents have been asked to wear masks in public and avoid large gatherings.

Meanwhile, patrol teams have been deployed round the clock at the border in certain provinces like Kien Giang, An Giang and Dong Thap. Field hospitals are planned in Can Tho, a vital traffic intersection in the Mekong Delta; and extra Covid-19 vaccine doses have been provided to certain Mekong Delta provinces.

So far, over 425,000 people have been vaccinated with a Covid-19 vaccine made by British-Swedish firm AstraZeneca. Most of them are frontline workers in the coronavirus fight, including doctors, soldiers and police personnel. 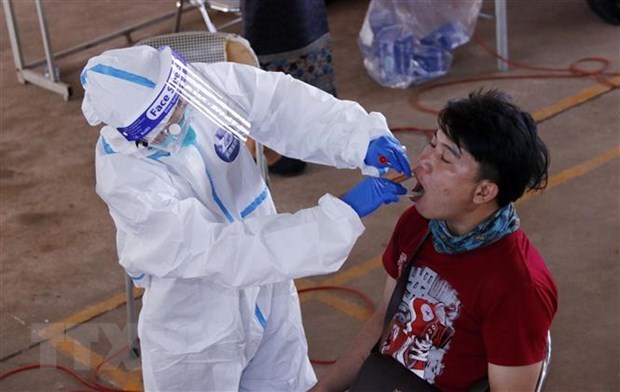 Vientiane (VNA) – The Lao government has announced that the country  basically completed the preparation of resources to cope with the COVID-19 pandemic in the context that the number of infections is increasing in the Southeast Asian nation.

With nearly 500 new infections reported in the country since April 20, the Lao government has asked its health sector to urgently check and list medical supplies and medicines, and financial sources to serve the pandemic prevention work.

The sector was also requested to prepare quarantine and treatment facilities, and focus on tracing and taking samples for testing for those who contacted with COVID-19 patients.

According to the Lao Ministry of Health, hospitals serving COVID-19 treatment in Vientiane are ready to receive patients.

The Lao government also asked for smooth flows of imported goods and inter-provincial transport  in order to ensure the supply of essential products for people.

All 18 provinces and cities of Laos now are under lockdown.

The Vietnamese Embassy in Laos has reported that there were 13 Vietnamese people  in Laos infecting with COVID-19, with five of them are being treated at a hospital in Vientiane.

It said that since April 20, nearly 2,000 Vietnamese people in Laos have applied for support to return to Vietnam, and that the embassy has worked hard to provide maximum assistance to them./.

The Indian strain of Covid-19 is more contagious and more fatal. Vietnam is rushing to sequence the gene in Covid-19 infections in four Indian experts who are currently in Vietnam.

Prof. Nguyen Van Kinh, President of the Association for Infectious Diseases, told an online meeting on Covid-19 prevention and vaccination safety on April 28 that the B.1617 virus strain in India is more dangerous than the current ones.

“This strain has a double mutation in the protein S segment, so it spreads very quickly and the fatality is high,” said Professor Kinh. 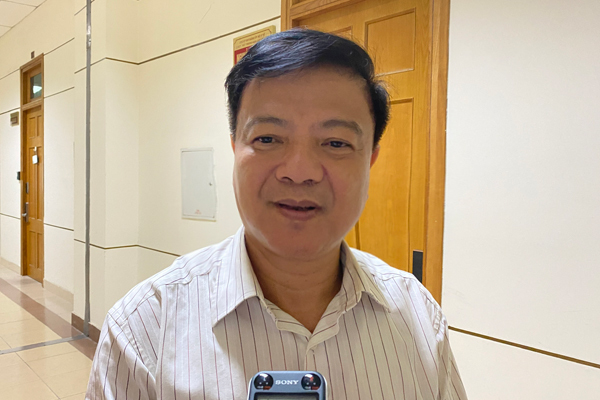 In Vietnam, four Indian experts who recently entered Vietnam and were under quarantine in a hotel in the northern province of Yen Bai were confirmed to be positive to Covid-19. A hotel employee who had close contact with them was also positive. All of the five patients are being treated at the Central Hospital for Tropical Diseases in Hanoi.

To determine whether or not these patients are infected with the Indian strain, Vietnam is urgently sequencing the genes of these cases. Results are expected in the next few days. The patients are in stable condition.

The results of genetic sequencing will be the basis for Vietnam to strengthen preventive measures and have sufficient information for health workers to have appropriate treatment plans.

If the India strain is detected, Vietnam will have five strains of SARS-CoV-2, besides the mutant strain B.1.1.7 from the UK, B.1.351 in South Africa, D614G in Europe and the original strain in Wuhan.

According to Prof. Kinh, the Indian variant is being noticed by the whole world because it spread faster than the British variant.

“The new strain spreads faster than all other strains that India has seen before. India has to face the variant, but the whole world is also very concerned about how to prevent it from spreading to other countries,” Prof. Kinh said.

However, since many countries have not yet closed their borders, the new strain has appeared in at least 17 countries.

“With the current context, experts are afraid that in the next 10 days India will peak in the number of deaths, from 2,000 to 13,000 cases a day. It will be a tragedy for India if there are no timely response measures,” Prof. Kinh added.

A steering committee for COVID-19 vaccination safety debuted at a video conference in Hanoi on April 28 that was connected to 63 cities and provinces nationwide.

Minister of Health Nguyen Thanh Long issued Decision No 1888/QĐ-BYT on April 15 establishing the steering committee, which comprises senior officials from the ministry and leaders from its departments along with leading local experts and scientists in diverse fields, from immunisation, infection, emergency resuscitation and intensive care to haematology, cardiology and neurology.

The committee is tasked with guiding medical establishments on screening, monitoring, and handling any adverse events following COVID-19 vaccinations and promptly assisting localities in dealing with all situations safely.

According to Assoc. Prof. Dr Luong Ngoc Khue, Director of the Medical Examination and Treatment Department at the MoH and deputy head of the committee, a vaccination safety system has been set up nationwide.

Committee members work online and stand ready to reply to any concerns regarding the vaccination of health workers, the official said.

According to a report from the National Expanded Programme on Immunisation, released on April 27, a record 50,104 people were inoculated on April 26.

Nearly 260,000 people – mostly frontline workers and medical staff – in 42 cities and provinces have been injected with the AstraZeneca vaccine since the national vaccination drive began on March 8.

No incidents of rare blood clots have been reported so far, while typical reactions (tiredness, mild fever, muscle pains, etc.) were reported in about 30 percent of people – even lower than the advisory information from the manufacturer and reports from European authorities.

Vietnam currently has nearly 1 million doses of AstraZeneca from the manufacturer and also from the COVAX Facility, along with 1,000 doses of the Sputnik V vaccine, a gift from Russia./ VNA

Vietnamese airlines have tightened measures to prevent Covid-19 outbreaks for the coming Reunification Day and May Day holiday.

During a meeting on April 28, Minister of Transport Nguyen Van The continued asking all agencies to follow Covid-19 preventative measures and emphasised that leaders would be held fully responsible if they let an outbreak occur. Inspection teams will be set up to carry out spot checks at bus stations, airports and train stations.

Civil Aviation Authority of Vietnam also issued orders to tighten monitoring for the holiday such as having more personnel to help passengers fill in their medical declaration forms and help passengers at security screening.

According to Vietnam Airlines, they have increased personnel and tightened monitoring. The planes and all equipment will be disinfected daily. Disinfectant sprays were also installed for passengers before they enter the planes. The airlines have prepared isopropyl alcohol wipes for passengers on the plane.

Vietnamese airlines have received a large number of people booking for the coming holiday. Tickets were sold out quickly as airlines increased flights and some airports were at risk of overcrowding. Vietnam Airlines Group announced that they have sold 610,000 seats in total.

However, as a new Covid-19 case was announced in Yen Bai Province on April 28, many passengers in the northern region have cancelled or postponed their trips.