HÀ NỘI – Việt Nam’s capacity for the processing and manufacturing industry remains limited and heavily relies on foreign supply chains for imported components and accessories, leading to difficulties for local businesses, particularly amid the COVID-19 pandemic.

Trịnh Thị Thanh Thủy, Deputy Director of the Institute of Industry and Trade Policy and Strategy under the Ministry of Industry and Trade, said last year countries with leading manufacturing and processing industries faced many difficulties, while Việt Nam was a bright spot with positive economic growth.

“The country’s positive growth is based on key manufacturing sectors, particularly those with high technology content and value such as electronics, electronic components, computers, and components for the automobile industry. Furthermore, agricultural processing and garment sectors have also obtained remarkable results,” Thủy said.

Phạm Tuấn Anh, Deputy Director of the Industry Department under the Ministry of Industry and Trade, said in 2016-19 domestic industries made a contribution of 30 per cent of the country’s gross domestic product (GDP), the largest contribution to State coffers.

Notably, the proportion of processing and manufacturing industries had increased rapidly without relying much on the mining industry.

In recent years, many industries have seen rapid development, such as electronics, textiles, and footwear with high export value.

Tuấn Anh said the processing and manufacturing industry contributed the highest to GDP in terms of added value, creating a foundation for industrial development and modernisation of the country. The growth rate of the industry’s added value was much higher than the GDP growth in the last five years.

Despite some success, experts have said that the Vietnamese processing and manufacturing industry has failed to meet its potential.

Thủy said the most difficult problem was the lack of raw materials. Domestic manufacturers still rely greatly on foreign markets, particularly  raw materials imported from China and South Korea. Thủy noted that business process outsourcing has been common in Việt Nam depending much on foreign direct investment (FDI) enterprises.

Tuấn Anh said the problem was the development of strategies and policy planning were not suitable for economic development. Credit policies for businesses failed to meet their needs.

He noted that FDI enterprises in Việt Nam had been offered much preferential treatment from foreign credit institutions and parent companies with low interest rates. Meanwhile, loan interest rates offered by local banks were high, putting local firms at a disadvantage.

In addition, Việt Nam faces a lack of large-scale conglomerates to push the country’s economic development.

To promote processing and manufacturing businesses to participate in the global supply chain, the department had worked with corporations such as Samsung and Toyota to create opportunities for local companies to work with foreign companies, said Tuấn Anh. — VNS

Vietnam needs about $128.3 billion of investment capital to develop its electricity industry in 2021-2030, according to draft electricity planning released by the Ministry of Industry and Trade (MoIT).

On February 9, the MoIT issued a draft national electricity development planning project for 2021-2030, with a vision to 2045 or the power master plan VIII and asked other ministries and agencies to contribute their ideas.

The power master plan VIII encourages the development of renewable energy and discourages hydroelectricity. Renewables made up 13 per cent of power in 2020 and are aimed to make up 30 per cent by 2030 and 44 per cent by 2045.

Regarding the power grid development programme, the plan proposes to continue building the 500kV power transmission system to transmit electricity from major power source centres in the Central Highlands, south-central, north-central and central regions to the large load centres in HCM City and the Red River Delta. It also asked to strengthen the interconnected transmission grid to support the transmission of power capacity.

In the draft, they also research the application of smart grid and the 4.0 technology in power transmission to calculate and propose in the master plan.

For the next 15 years, the ministry calculated the need at about $192.3 billion including $140.2 billion for electricity and $52.1 billion for the grid.

The probe is being held with the aim of determining whether or not producers in those three countries were the recipients of unfair subsidies.

According to information released by the Indian Ministry of Commerce, the investigation, which will be conducted by India’s Directorate General of Trade Remedies, could conclude with the imports facing a series of countervailing duties in line with World Trade Organization (WTO) rules.

The Indian side will investigate copper tube and pipe imports that were shipped between April 1, 2019, and March 31 this year.

The Indian Ministry of Commerce also received the import data of the customs relating to the subject goods over the previous four years.

It said the figure indicates that the increased import figures from the three countries account for more than 90% of their total imports of subject goods.

The Hanoitimes – The country saw the modest number of tourists in June compared to the same period in the past many years.

Foreign arrivals in Vietnam in June dropped the the lowest in many years as the Southeast Asian country shut its borders to bar intrusion of the coronavirus although tourism accounts for 9% of its GDP.

The international influx to Vietnam decreased by 61.3% in June compared to May and 99.3% year-on-year to 8,800, according to the General Statistics Office (GSO).

In the first six months of 2020, Vietnam welcomed 3.74 million international visitors, a drop of 55.8% over the same period last year, GSO data showed.

In the six-month period, revenue from tourism was VND10.3 trillion (US$442.2 million), down 53.2% compared to the same period last year, marking the biggest drop in the past six years, according to the GSO.

Between January and June, Asian visitors still accounted for the majority of the tourist inflow, with nearly 2.73 million, down 58.4% over the same period last year. Of the amount, arrivals from China, South Korea, Japan, Taiwan (China), Malaysia, among others, sharply decreased by 63%, 60.4%, 55.8%, 55.2%, 61%, respectively.

Many Vietnamese travel businesses are working on resuming inbound services though they haven’t known yet when Vietnam would allow foreign entry.

Dong Thi Co., Ltd is currently preparing for the reopening of inbound tourism. After receiving a number of tour bookings for February next year, the  company has now completed its preparation and is focusing on purchasing discount vouchers of hotels to be able to offer tours with good prices.

Many travel businesses also are hoping that the government will soon put in place the visa-free policy again which was suspended in March to fight the pandemic, as there are positive signs for the reopening of the inbound market soon.

According to local tour operators, not only domestic enterprises but foreign partners also want international air services to reopen soon to get back to business after months of suspension due to Covid-19.

Previously, passengers were required to present at the airport a paper confirming that they have undergone a negative PCR test for COVID-19 and the test must be done at least three days before their departure. The paper must be certified by the Vietnamese diplomatic representative in his/her country.

Before boarding the plane, passengers are required to wear a face mask, install mobile applications “Vietnam Health Declaration” or “Bluezone” and make a mandatory electronic medical declaration. The airlines must measure passengers’ body temperature, and they are allowed to refuse those whose body temperature exceeds 37.5 degrees Celsius.

Vietnamese and foreign airlines will only carry out aviation procedures for passengers who have a Vietnam visa issued by authorized agencies.

The CAAV also proposed that the Ministry of Transport allow airlines to monitor flight crew’s health for 48 hours, and they are only allowed to fly other flights if they show no signs of contracting COVID-19.

The Prime Minister has agreed with the Ministry of Transport’s proposal to re-open international flights to first six destinations overseas which have brought the COVID-19 pandemic under control. The six destinations are Guangzhou (China), Taipei (Taiwan – China), Seoul (The Republic of Korea), Tokyo (Japan), Phnom Penh (Cambodia), and Vientiane (Laos).

The decision came into effect on September 15. 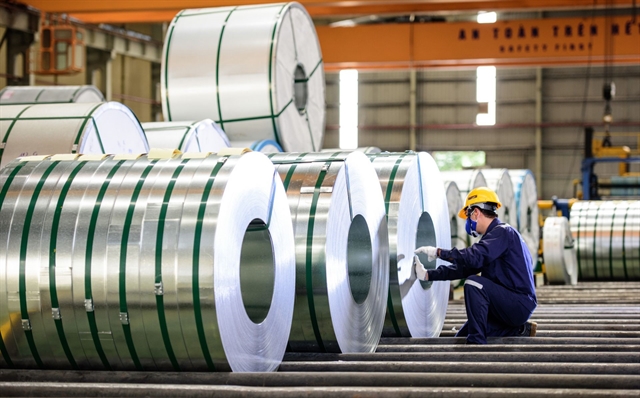 Some local enterprises have a legal department that specialises in dealing with the trade remedies in foreign markets, especially in the sectors producing key export products such as steel. Photo tapchicongthuong.vn

HÀ NỘI — The Ministry of Industry and Trade (MoIT) will continue to support domestic enterprises, especially small and medium-sized firms, to improve their awareness of trade remedies.

It will provide practical lessons on handling trade defence lawsuits for local enterprises.

The ministry will also focus on training State officials, commodity associations and industries on trade remedies, especially for commodities that are regularly investigated by foreign countries such as steel, fisheries, wood and chemicals.

Many Vietnamese enterprises have been adapting to trade defence cases. Some have legal departments that specialise in dealing with trade remedies at foreign markets, especially in sectors producing key export products such as steel, seafood and garments.

However, according to the authority, there are still some firms, especially smaller companies, that are unaware of the importance of trade remedies and how they would affect their production and business activities.

Therefore, the level of co-operation can be considered a prerequisite for achieving a positive result in trade remedies cases, according to the TRAV.

In the case of the antidumping duty (AD) and countervailing duty (CVD) investigations of imports of utility-scale wind towers from Canada, Indonesia, South Korea (AD only), and Việt Nam to the US, Việt Nam received countervailable subsidies at a rate of 2.84 per cent while Indonesia received a rate of 5.9 per cent.

Meanwhile, in the case of the anti-dumping and anti-subsidy investigation into corrosion-resistant steel sheets imported from several countries, including Việt Nam, Canada concluded Việt Nam does not subsidise enterprises producing and exporting the steel, based on information provided by the Government of Việt Nam.

According to the US Customs and Border Protection (CBP)’s announcement on February 11, 2021, there is a lack of evidence to conclude Minh Phú Corporation has illegally evaded anti-dumping duties levied on Indian shrimps.

Therefore, CBP will consider the conclusion issued on October 13, 2020, to not apply anti-dumping tax on exported shrimp of Minh Phú Seafood.

The MoIT also said that the US’s conclusion on dumping and subsidies for car tyres from Việt Nam and some other economies, which was released on December 30, declared tyre exporters of Việt Nam free from anti-dumping measures.