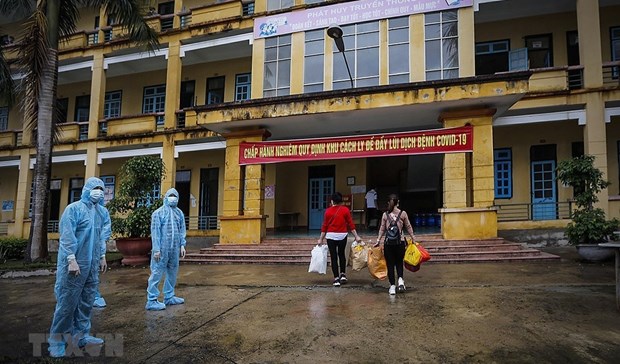 Hanoi (VNA) – The National Steering Committee for COVID-19 Prevention and Control on May 5 sent an urgent dispatch requiring the strict implementation of concentrated quarantine regulations and post-quarantine management.

Chairpersons of the People’s Committees of provinces and centrally-run cities are asked to direct the implementation of concentrated quarantine for at least 14 days followed by home quarantine for the next 14 days for everyone entering the country.

The committee required checking infrastructure at concentrated quarantine facilities to ensure the strict monitoring of quarantined people. Localities must improve the handover, transport and reception of those who complete their quarantine period at concentrated facilities back to their places of residence.

People who return from concentrated quarantine facilities should make daily health declarations for local medical workers. If showing signs of fever, cough, sore throat, shortness of breath, tiredness and loss of taste, they are advised to move to the closest health clinic for timely guidance.

They are not allowed to leave their houses or places of residence. In cases they need to go out for work or other necessary purposes, they are required to report to local police and medical staffs and strictly follow the Ministry of Health’s 5K message: khau trang (facemask), khu khuan (disinfection), khoang cach (distance), khong tu tap (no gathering), and khai bao y te (health declaration).

In addition, COVID-19 testing should be conducted on the seventh day since the concentrated quarantine period ends, said the urgent dispatch.

The Ministry of National Defence is requested to direct army-managed concentrated quarantine establishments to seriously follow disease prevention and control measures, while the Ministry of Public Security is asked to direct local police forces to coordinate with medical agencies to manage the health monitoring at home and place of residency for those entering Vietnam./.

Accordingly, all concentrated quarantine facilities have been told not to release people after they complete the 14-day quarantine period, and test negative for novel coronavirus twice.

This came after some people who completed their two-week duration tested positive for the virus after leaving quarantine sites.

The new quarantine measure is applied from 0:00 on May 4 until further notice from the National Steering Committee on COVID-19 Prevention and Control.

Most recently, an Indian expert, who works for local automaker Vinfast, has been confirmed with COVID-19 in Hanoi. The man, born in 1984, arrived in Vietnam on April 17 and was immediately put under 14-day quarantine at a hotel in Hong Bang district, the northern city of Hai Phong.

He tested negative for the virus twice during the mandatory quarantine period, and left for Hanoi on May 1 to stay with his wife and children at Park 10, Hoang Mai district’s Times City.

Authorities are actively tracing people having close contact with him for COVID-19 test and quarantine to prevent the virus spreading further.

The new decision will be implemented from 00:00 on May 4.

All localities nationwide are asked to strictly obey the new regulation on the compulsory quarantine period.

The Health Ministry also calls on people to refrain from going to public places and gatherings while following the 5K recommendations. People are suggested to call the hotline 19009095 for advice when needed.

The compulsory concentrated COVID-19 quarantine period in Vietnam has been officially extended to 21 days.

The mandatory concentrated quarantine for those enter Vietnam from abroad or had close contact with confirmed COVID-19 cases will be extended from the current 14 days to 21 days, and the new regulation takes effect from May 5, Minister of Health Nguyen Thanh Long has said.

The decision was made after consultation with epidemiologists and virologists in light of new variants of the virus prompting revisions to our knowledge of disease incubation time, he said.

The new protocol aims to “protect the community from the spread of coronavirus” amid recent cases found positive following the completion of 14-day quarantine, Long said.

The follow-up medical observation period at home for those who have completed concentrated quarantine will be cut from two weeks to seven days.

People who return from quarantine facilities should make daily health declarations with local medical workers. If they show signs of fever, cough, sore throat, shortness of breath, tiredness or loss of taste, they must go to the closest health clinic for guidance, a dispatch from the health ministry from earlier this morning, which still put the quarantine period at 14-day but provided tightened regulations.

They are not allowed to leave their houses or places of residence. If they need to go out for work or other necessary purposes, they must report to local police and medical staff and strictly follow basic prevention measures.

Long also requested all localities to review cases of foreigners entering Vietnam and screen high-risks groups of people like those in service sectors like at discotheques, bars, karaoke bars, and massage parlours for COVID-19.

Previously, in late April, a Vietnamese national returning from Japan has found to be infected with the virus after finishing 14-day concentrated quarantine and caused a cluster of infections in the northern province of Ha Nam.

An Indian expert in Hanoi was confirmed on May 4 to be carrying the virus after 14 days of concentrated quarantine./. VNA

The Ha Nam Centre for Disease Control has collected his nasal swab for the second time and sent the sample to the National Institute of Hygiene and Epidemiology for confirmation, Truong Thanh Phong, deputy director of the provincial Department of Health told local media outlets.

All those who had come into contact with the patient were transferred to a concentrated quarantine facility for medical surveillance, said Phong.

The patient, 28, returned from Japan to Vietnam on April 7 after his labour contract had expired.

He was taken to Alisia Beach hotel in Da Nang, central Vietnam, for a 14-day quarantine period according to the COVID-19 rules.

Following his three negative tests, the man was allowed to return home and self-isolate locally.

However, he tested positive after showing virus-like symptoms such as a cough and a sore throat.

The two escapees, with one born in 1999 and the other in 2000, are Chinese who are among 11 Chinese citizens illegally entering Vietnam, according to Nguyen Huu Hoai Phu, chairman of the Cu Chi District administration.

“The group were transferred to Cu Chi for quarantine and medical surveillance according to COVID-19 rules five days ago,” said Phu at a meeting of the HCM City Steering Committee on COVID-19 Prevention and Control on May 3.

“The two Chinese citizens might have fled to neighbouring districts,” the official speculated, adding that the Cu Chi facility is now quarantining a person who had come into close contact with a COVID-19 patient of Ha Nam province.

“We need to make sure that there are no loopholes in the management and monitoring in concentrated quarantine facilities,” said Phong.

He also unveiled that relevant forces have detained more than 100 illegal entrants during the past month, but warned the real figure could be much higher.

“For these cases, our view is to strictly handle according to the law,” said Phong.

More than 40 Chinese citizens have been transferred to a concentrated quarantine facility after they were found illegally living in an apartment in Hanoi capital.

Initial investigations show the Chinese group had illegally entered Vietnam and rented the apartment in Hanoi to live.

It is still unknown when they had entered Vietnam.

The Chinese people were immediately taken to a concentrated quarantine facility for medical surveillance according to COVID-19 rules. Relevant agencies also disinfected the apartment and nearby apartments

Earlier the same day, the Hanoi Centre for Disease Control announced two local infections closely linked to a Chinese expert who had been confirmed as a COVID-19 patient upon his return to China.

They were among the six Sunny bar staff who had contacted the Chinese expert in Vinh Phuc province.

A group of Chinese experts entered Vietnam and completed their 14-day quarantine period according to the COVID-19 rules in Yen Bai province, on April 23.

However, instead of self-isolation in their residence for another 14 days, they travelled to a number of localities including Lai Chau, Vinh Phuc, Bac Giang and Lang Son.

On April 24, they went to Sunny bar in Vinh Phuc and contacted many staff there. At least six staff have been diagnosed with the SARS-CoV-2 virus after one of the Chinese experts was confirmed as a coronavirus infection.