HCMC – Bac Giang Province, the country’s current biggest Covid-19 hotspot, has allowed 98 companies with over 15,760 workers to resume operations, as they meet the requirements for safe production.

Workers at the factories must test negative for Covid-19 before returning to work, and keep a safe physical distance from each other while working or eating.

It is estimated that the northern province lost over VND2 trillion a day after it shut down four industrial parks to curb the spread of the pandemic in late April.

Many companies in Bac Giang are large suppliers and exporters, so the closure of industrial parks has caused disruptions in the supply chains.

Therefore, the province has to allow companies that meet requirements for Covid-19 infection prevention and control to reopen step by step.

The province is facing a shortage of workers as many of them are still isolated in quarantine centers. Therefore, it has asked districts to help workers who test negative for Covid-19 and complete their quarantine period to return to work at the earliest.

Bac Giang has reported over 4,000 Covid-19 cases in the fourth Covid-19 wave since April 27. The Covid-19 situation in the province is being brought under control and the provincial government is determined to fight off the pandemic in the next 15 days. 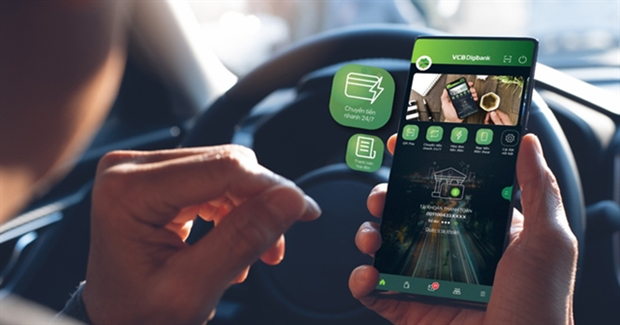 HCM City (VNS/VNA) – Businesses would be required to use non-cash payments for trading transactions of any value under a proposal submitted to the Government by the Ho Chi Minh City Tax Department .

Currently, trading transactions worth more than 20 million VND (868 USD) have to be made by cashless payment in order to enjoy tax refunds and corporate income tax reductions as regulated by the law on value-added tax.

The proposal is aimed at improving tax governance and strengthening monitoring of expenditures and turnover of businesses and traders, according to an official at the tax department.

The official said that payments using non-cash methods have become increasingly popular in Vietnam, and the Government last year issued a resolution to boost cashless payments in the country.

These companies would be required to provide tax agencies information on individuals and businesses in Vietnam involved in their business activities.

Associate professor Dinh Trong Thinh of the Academy of Finance said it was vital to speed up cashless payments to reduce the risks involved in cash payments and to increase financial transparency.

However, limited payment infrastructure was one of the barriers hindering electronic payment adoption, he said.

VNA
Digital transformation is deemed an evitable trend which helps the firms surmount the adverse impact of COVID-19, as well as a key to sustainable development.
The pandemic has dealt a major blow to this economic sector with over 95 percent of companies severely affected.
CEO of Travelogy Vietnam Vu Van Tuyen said that IT applications help businesses to optimise personnel and system management, so as to improve efficiency and competitive edge.
In addition, technology also creates connection between firms, fostering transparency and sustainable development, he added.
To meet demand of tourists, travel companies have devised virtual or interactive tours embellished with images, videos, sound effects and music.
When it comes to applying digital transformation, firms are advised to take consumer psychology into account in an attempt to build a suitable roadmap.
The acceleration of digital application is vital to supervise tourism activities and support COVID-19 prevention and control measures, as well as ensure long-term business of the sector, Ha Van Sieu, Deputy Director General of the Vietnam National Administration of Tourism (VNAT), has said.
To support stakeholders, the VNAT has rolled out a project on a smart tourism operation centre that will connect with customers and coordinate with telecommunication units.
Localities are asked to guide firms in signing up for a COVID-19 safety self-assessment system and an app on safe tourism, which have seen the registration of all 64 provinces and cities in the country.

At the close, the market breadth was positive with 202 gainers and 184 decliners. Trade volume totaled 775.7 million shares worth VND25.3 trillion changing hands, up 5.9% in volume and 6.6% in value from the previous session.

There were over 60.1 million shares valued at VND2.1 trillion traded in block deals.

Many securities stocks, including SSI, AGR, APG, BSI and CTS, reported a strong rise of over 5%, contributing to the gain of the main index.

In the group of speculative stocks, agricultural company HNG soared by 3.9% at the close and reported a matching volume of 29.6 million shares, while construction firm ROS and property developer FLC lost ground.

Many bank stocks such as BID, CTG, VCB, VPB, MBB and MSB ended in the red, but lender VPB was the most actively traded stock on the southern bourse with over 36 million shares changing hands.

Lender SHB lost steam, but took the lead on the northern bourse by liquidity with over 19 million shares traded.

The Asia Pacific Property Awards celebrate the highest levels of achievement in the architecture, interior design, real estate and property development sectors in the region. These prestigious awards attract entries from the best professionals and top industry brands annually.

In this year’s edition, there are 681 winners from across the Asia Pacific in the Architecture, Interior Design, Real Estate, and Property Development categories. Mainland China swept the maximum number of awards (216) followed by Thailand (86). This was closely followed by Hong Kong (63) and Vietnam (45). Other important markets including Singapore (44), Malaysia (43), India (31) and Australia (29), also made a mark at this year’s awards.

The judging panel for this year’s awards consisted of over 100 top industry experts. Luminaries such as Lord Best (Chair of the House of Lords Communications Committee, and Chair of The Property Ombudsman’s Council in the UK), Bill McClintock (Chairman, Guild of Property Professionals UK), and Annie Hampson (Former Chief Planning Officer at the City of London) were part of the illustrious judging panel for the Asia Pacific Property Awards. Each judge was allocated to entries that were of their areas of expertise and knowledge. All entries were meticulously adjudicated on their design, quality, service, innovation, originality, and commitment to sustainability.

The Asia Pacific Property Awards are one of the biggest and most recognized awards in the industry with over 900 entries received each year from countries across the region. Companies who had the honor of receiving the award are accredited for leading the architecture, interior design, real estate and property developer sectors. Sponsored by LIXIL Asia through its power brands GROHE and American Standard for the third year, the Asia Pacific Property Awards are the largest branch of the International Property Awards (IPA). This year’s 2021-22 top winners were announced through the IPA’s bespoke online ‘Red Carpet’ presentation videos. This is part of the IPA’s approach in providing an innovative and popular alternative in place of the annual live awards event, due to Covid restrictions.

As a global market leader in water technology, LIXIL recognizes the importance of using technological innovations to address its consumers’ ongoing needs and challenges, thereby improving their quality of life with outstanding products and services. Through its portfolio of power brands, LIXIL offers pioneering technologies that promote health, hygiene, comfort and sustainability to meet the ever-growing demands for touchless, IoT-enabled, hygiene solutions.

As an industry leader, GROHE manufactures all of its products to the utmost German quality standards, incorporating exclusive and class-leading technologies across complete bathroom solutions. With sustainability as a core brand value, GROHE is proud to be the first global sanitaryware brand to achieve carbon-neutral production (in April 2020). American Standard’s HygieneClean System is the industry’s benchmark for toilet hygiene safety, with its quadruple combination of powerful flushing, advanced rimless design, cutting-edge Aqua Ceramic, and highly effective ComfortClean anti-bacterial technology.

Satoshi Konagai, Leader, LIXIL Water Technology, Asia Pacific, expressed, “LIXIL is honored to be a part of this partnership that continues to provide us with an excellent opportunity to connect with the best developers, architects and designers in the Asia Pacific. Our earnest congratulations to all winners on your well-deserved success. The achievement and attainment of these highly coveted awards further underscore the outstanding capabilities and accomplishments of the winners. The ongoing pandemic has led to a growing demand for better hygiene products and solutions, and with consumers spending more time at home, the demand for ‘home spa’ experiences have also gradually increased. As a purpose-driven company, we will lead the way in introducing innovative and novel products to meet consumer demand. We look forward to working together with the community to bring LIXIL’s water and housing solutions to more people through our well-loved brands.”

Adele Tao, Leader, LIXIL Water Technology, Greater China, added, “Despite the challenges and disruptions brought about by the global pandemic, LIXIL remains steadfast in our mission to design products that make better homes a reality for everyone, everywhere. Our continued commitment to improve the quality of our consumers’ lives over the years has been pivotal in addressing some of the key challenges consumers face globally. The Asia Pacific Property Awards present us with the opportunity to recognize some of Asia’s most innovative and creative professionals and celebrate their achievements. We will continue to stay engaged with the industry, and will continue fostering stronger collaboration and partnerships with the developer, designer and architect community to achieve even greater things on a global level.”

A cut of steel prices from Vietnam’s major steelmakers will drive up the domestic market in the next months.

Vietnamese businesses are hoping to maintain stable prices of steel products from now on until the end of this year after the market has witnessed a decline in prices in recent weeks.

The cut of still prices announced by the local major steelmakers on June 9 is seen as a poke to push back the stagnancy of the steel market, which had had a price hike since late 2020.

Vice Chairman of the Vietnam Steel Association (VSA) Do Xuan Chieu said lower steel prices in the domestic market was due to the decline in prices of input materials, including iron ore, steel ingots, which make up 70-80% of the list prices.

Chieu referred to the fact that most-traded September iron ore on China’s Dalian Commodity Exchange ended at the lowest point since June at US$173.03 per ton, while the July contract for iron ore on the Singapore Exchange also declined by 2% to US$173.03.

“A stagnant in steel demand from the Chinese market has led to prices decline,” said Chieu.

In the Vietnamese market, VSA Chairman Nghiem Xuan Da attributed freezing construction activities as in the rainy season in June and July to low demand for steel.

According to Da, the peak season for construction would normally fall in the first and fourth quarters of the year.

“The declines, however, remain modest at around 3-5%, as steel prices are expected to go up as construction activities heat up,” he noted.

A recent report from Fitch Solutions suggested global steel prices would reach US$800 per ton in the final half of this year, an increase of US$140 per ton against its previous forecast, pointing out an imbalance between supply and demand.

Fitch Solutions experts have also said that the decline in steel prices would be insignificant as consumption demand is forecast to go up.

Steel prices are predicted to moderate to around US$600 per ton by 2022, stated Fitch Solutions.

To further halt the steel price hiking, Da from the VSA noted that along with keeping operational costs at an efficient level, local steel producers should prioritize domestic markets as measures to prevent steel prices from surging.

“Policies from the government are needed to temporarily discourage steel exports,” Da said.

At a recent meeting with local steel producers, Minister of Industry and Trade Nguyen Hong Dien stressed the necessity for local firms to focus on iron ore mining and processing, in turn creating stable supplies of input materials for steel production.

Economist Vu Dinh Anh told The Hanoi Times that as steel prices are driven by the market, construction companies should draft plans to keep a hold on steel supplies to minimize impacts from rising steel prices.

“The government can only intervene when there is a major disruption to the local market,” Anh said.