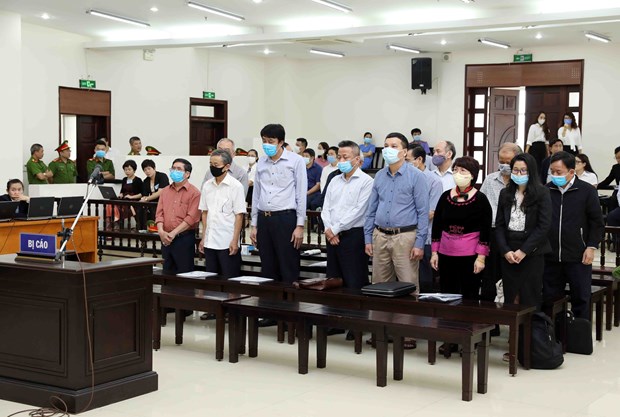 The defedants at the first-instance trial that opened on April 12 (Photo: VNA)

Hanoi (VNA) – Nineteen former executives and officials of the Thai Nguyen Iron and Steel JSC (TISCO) and the Vietnam Steel Corporation (VNS) were brought to trial in Hanoi on April 12 for their involvement in wrongdoings at TISCO.

The first-instance trial, held by the Hanoi People’s Court , is expected to last 10 days.

Fourteen defendants were charged with “violating regulations on the management and use of State assets, causing losses and wastefulness” under Clause 3 of Article 360 in the 2015 Penal Code.

According to the indictment issued by the Supreme People’s Procuracy, the VNS Board of Directors decided the investment in the second-phase production expansion project of TISCO and TISCO was the investor of the project.

This project initially had total investment of more than 3.8 trillion VND (164.9 million USD at the current exchange rate). The China Metallurgical Group Corporation (MCC) won the construction bid in 2007.

On July 12, 2007, then TISCO General Director Tran Trong Mung and MCC General Director Shen Heting signed an engineering, procurement, and construction (EPC) contract worth over 160 million USD (equivalent to over 3.5 trillion VND). The value, including taxes and expenses necessary for contract implementation, was stipulated not to change during the implementation process.

The indictment said that although the related individuals at TISCO and VNS were aware that MCC had infringed the contract and groundlessly proposed the implementation extension and value hike, they did not consider contract termination, revoke the advance, or report to competent persons to abolish the bidding result and re-organise the bidding process so as to ensure the project’s effectiveness and progress.

Among the defendants, TISCO General Director Mung held the overall responsibility for the project’s effectiveness while VNS Chairman Mai Van Tinh was in charge of approving and directing the project implementation.

The Supreme People’s Procuracy held that the violations of rules on the management of State assets and the lack of sense of responsibility by those at TISCO and VNS have caused losses of over 830 billion VND to the State. The sum is the interest rate TISCO had to pay to banks for the period from the time the project began lagging behind schedule, on May 31, 2011, to the date an official investigation was launched, on April 18, 2019./.