“Cargill Food manufacturers in Asia face the challenge of meeting rising consumption demand, especially within the convenience and foodservice categories. As leaders in the modified starches industry, this partnership with Starpro will allow us to leverage our collective strengths more effectively to generate greater opportunities for growth, as well as support new innovations and solutions in the future,” said Franck Monmont, managing director of Cargill Starches, Sweeteners & Texturizers Asia. “Our ambition is to be the partner-of-choice for customers in the region by combining deep market and technical knowledge, a robust product offering, and cost optimisation through local manufacturing.”

Johnney Hsueh, consultant at Starpro added, “Through this cooperation between Cargill and Starpro, we look forward to promoting the wider use of quality modified tapioca starch among food manufacturers across the world.”

The agreement will cover a full range of locally-manufactured modified tapioca starches for the food industry across markets in the Asia-Pacific as well as globally. In addition to this high-quality tapioca starch range, Cargill also offers a wide portfolio of starches and starch-based texturising solutions across different raw materials that provide multi-functional properties to meet the varied needs of Asian customers’ food processes and cuisines.

“Texture is a critical element in the Asian palate. From instant noodles to packaged foods and snacks like Chinese sausages, gyozas, and Japanese mochi, as well as beverages like the perennial favourite bubble tea, Asian consumers are known to seek out textural experience in their foods,” explained Monmont. “As a non-GMO botanical with unique textural properties such as chewiness, springiness, and a clean taste profile, tapioca starch is well suited to help food manufacturers meet the product expectations of Asian consumers.”

This signing with Starpro is the latest move by Cargill to grow its specialty starch portfolio in the Asia-Pacific, after the announcements of the expansion of a cold-water swelling starch line at its sweetener plant in Pandaan, Indonesia, as well as the construction of a modified starch plant in Songyuan, China.

As part of the company’s long-term strategic vision to grow its presence in the Asia-Pacific, Cargill has also made many significant investments in the region in recent years:

• Launch of its first chocolate manufacturing operation in India;

• Growth in Thailand with $70 million investment in seafood and poultry, total investment of more than $1.15 billion after 50 years in the country. 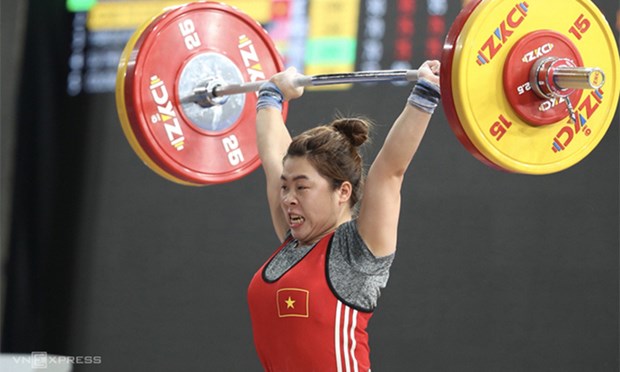 Hanoi (VNS/VNA) – Hoang Thi Duyen won the first international medal of the year for Vietnamese athletes by finishing third at the Asian Weightlifting Championship in Tashkent, Uzbekistan, on April 19.

Three-time World Cup winner Thach Kim Tuan lifted 128kg in the men’s 61kg snatch event but he failed in all three attempts in the clean & jerk, meaning he did not come close to a medal.

Meanwhile, Vuong Thi Huyen could only place fifth in the women’s 49kg with a total lift of 177kg (78kg snatch and 99kg clean & jerk). The result was 6kg less than Huyen’s personal best.

Their failure was attributed to their switch of weight classes. Tuan moved up from 56kg to 61kg while SEA Games gold medalist Huyen went from 45kg to 49kg.

Duyen was the last Vietnamese hope to win a continental medal.

The 24-year-old, who won three World Cup titles last January, did not falter.

The gold went to Kou Hsing-chun of Chinese Taipei with 247kg and Lou Xiaomin of China took silver with a 227kg lift.

It was a big statement from the Giay ethnic minority athlete who finished ninth at the 2019 championship.

The medal will improve her world ranking from her current seventh position and give her a better chance of competing at the Tokyo Olympics this summer.

“At present, Tuan, world No 5, and Duyen are in the safe zone to qualify for the July Games, according to IWF rules which will select the best eight of each category as Olympic participants,” said coach Do Dinh Khang

Huyen is at No 12 and approaching the qualified group. But China have three lifters and the US have two ranked higher than Huyen while the Democratic People’s Republic of Korea’s Ri Song Gum, who is No 3, has withdrawn. As the IWF allows each country to send only one representative to the Olympics, Huyen is temporally in the top eight.

Athletes still have a chance to improve their positions at the Pan-American and African championships in May.

However, Vietnam are still waiting for a fine from the International Weightlifting Federation after doping scandals relating to four other athletes since 2019.

IWF rules state that any country with three or more doping cases during Olympics qualification starting from November 2018 may lose their Olympic slots or even be banned.

Coach Khang said the final decision would come in May and hopefully Vietnam would be approved for one slot./.