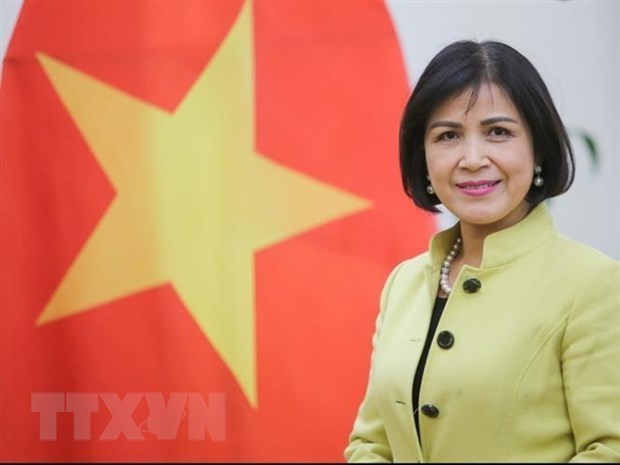 Geneva (VNA) – Vietnam highly values the important role of the South Centre and continues supporting the centre in boosting cooperation between developing countries and implementing joint actions to handle global issues towards the realisation of sustainable development goals (SDGs).

Ambassador Le Thi Tuyet Mai, head of the Vietnamese Permanent Mission of Vietnam to the United Nations, World Trade Organisation (WTO), and other international organisations, made the statement at the 21st meeting of the Council of Representatives of the member States of the South Centre held online in Geneva on February 11.

Ambassador Mai expressed her thanks and congratulated the Board, Executive Director and South Centre on their recent activities to support developing countries to effectively take part in international negotiation processes as well as build capacity at national and regional level, especially promote cooperation between developing countries in response to the COVID-19 pandemic and other global challenges, towards meeting SDGs.

She took this occasion to thank the centre and Executive Director Carlos Correa for their support to Vietnam to organise an online training seminar for Vietnamese experts on intellectual property in pharmaceuticals last December amidst the pandemic.

She said in the COVID-19 fight, Vietnam has closely coordinated with ASEAN member countries and the international community to save patients, support vulnerable groups and promote post-pandemic recovery.

At the meeting, Executive Director Carlos Carrea underlined the pandemic’s impacts on developing countries’ efforts in implementing the 2030 Agenda and SDGs as well as the necessity to build multilateral consensus to cope with the current health crisis, ensure vaccine distribution in a fair and equal manner to developing countries, eliminate poverty, and meet other demands of developing countries in the post-pandemic period.

Chairperson of the centre for 2018-21 period Thabo Mvuyelwa Mbeki said in the context ò financial difficulties due to COVID-19, the centre still balance its budget thanks contributions of the member countries and other assistance resources, so that the centre’s operations are maintained.

Representatives of the centre’s countries congratulated the centre’s achievements over the past 25 years, while appreciating the centre’s role in promoting South-South cooperation, North-South dialogue, as well as promoting multilateralism, response to the COVID-19 pandemic and other challenges to developing countries.

The meeting also discussed priority orientations of the centre in the coming time.

Established in 1995, the South Centre with headquarters in Geneva has 54 developing countries, including Vietnam , as members./.

VNA
The UN Security Council on Tuesday (Feb 9) failed to agree on a joint declaration on war-torn Syria, capping a day of negotiations in which the organisation’s special envoy to the country called to jump-start the deadlocked peace process.

Russia, Syria’s main ally, repeatedly blocked negotiations on the matter, diplomats said, although Moscow did not respond to a request for comment as to why.

The conflict in Syria, which broke out after the brutal suppression of anti-government protests in 2011, has killed more than 380,000 people and displaced millions.

Endless rounds of UN-backed peace talks have failed to stem the bloodshed and in recent years have been largely overtaken by parallel negotiations led by Russia and Turkey.

“The current divisions in the international community need to be bridged,” Geir Pedersen, the UN special envoy for Syria, told journalists earlier in the day following a Security Council video conference.

Pedersen said that without “constructive international diplomacy” on Syria, it was unlikely that “any track – constitutional track or any other – will really move forward.” The council’s monthly meeting on Syria is usually public, but officials kept the session private after a meeting of the Syrian Constitutional Committee in Geneva last month ended with no progress.

The committee was created in 2019 to modify Syria’s 2012 constitution, which directs the organisation of elections under UN supervision.

“Session five of the Constitutional Committee was a missed opportunity and disappointment,” Pedersen said of the January meeting, which included the Syrian regime, the opposition and civil society.

Diplomats told AFP that Western powers were unanimous during the Tuesday’s meeting in decrying the “failure” of the political process.

One representative accused the constitutional committee of having achieved nothing, and blamed the Syrian regime for “delay tactics.” 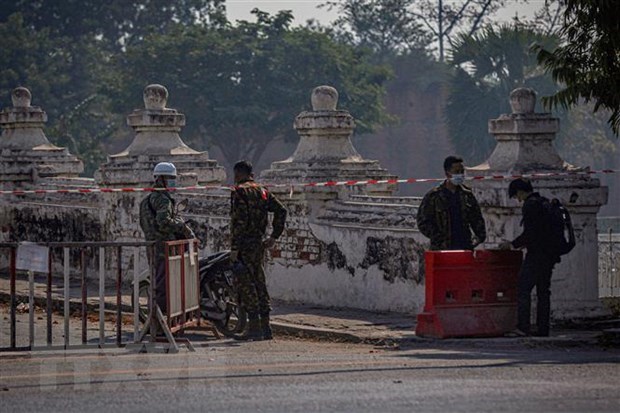 
Hanoi (VNA) – Vietnam calls on the international community and development partners to further support the transition to democracy in Myanmar , matching the wishes and interests of Myanmar people.

The appeal was made by Ambassador Le Thi Tuyet Mai, Permanent Representative of Vietnam to the United Nations, the World Trade Organisation (WTO) and other international organisations in Geneva, during the 29th special session of the UN Human Rights Council (UNHRC) late last week.

As a member of the Association of Southeast Asian Nations (ASEAN), Vietnam has kept a close watch on developments in Myanmar, and hoped that the country will soon stabilise the situation for national construction and development, as well as for peace, stability and cooperation in the region, while making more contributions to the building of the ASEAN Community, the ambassador said.

Representatives from 30 out of 47 UNHRC member countries, and 37 observer countries delivered speeches at the online meeting.

The UNHRC should focus on supporting the settlement of such issues in Myanmar, they suggested.

Ambassador Myint Thu, Myanmar Permanent Representative to the UN, briefed the delegates on the situation in his country, saying Myanmar is facing complex challenges and in the transitional period.

Myanmar would like to receive understanding and constructive cooperation of the international community , the diplomat stressed.

He affirmed that Myanmar will continue its coordination with the UN and ASEAN to gain long-term peace and stability and sustainable development, for the interests of Myanmar people.

At the end of the session, the UNHRC member countries passed a resolution under which they expressed their concern over the coup and human rights violations in Myanmar./.

The NASC gave opinions on several contentious issues in the draft revised law on Vietnamese guest workers with contracts; the amendments to the draft law on International Treaties; and the implementation of new regulations in the Law on NA Organisation.

The committee also discussed the reviewing of the NA’s 9th session and made initial comments on preparations for the 10th session of the 14th National Assembly. The working programme also included personnel work, several decrees, and other contents.

At the closing session, the NASC passed a resolution on the new environmental tax on jet fuel.

The Vietnamese delegation attended and delivered speeches at nine discussions and meetings, highlighting the country’s commitments to observing and promoting human rights with priorities given to vulnerable groups in the society.

Bac Giang Province, a major lychee growing region in northern Vietnam, has earned revenue of VND6.9 trillion (US$297.5 million) from the fruit in the 2020 season, up 9.5% from last year.

Nearly 100 medical workers did their best to successfully separate Truc Nhi and Dieu Nhi, the twins born conjoined at the pelvis, a feature of the rare ischiopagus type.

They have been transferred to another operating room to continue reshaping their organs, including adjusting the pelvis.

According to the Ho Chi Minh City Children’s Hospital, in July 2019, the medical facility received the special case of twins from Hung Vuong Hospital.

Following initial examination, the doctors said that the twins were connected via the pelvic abdomen with four separate legs, a feature of ischiopagus tetrapus (quadripus), a rare phenomenon that only accounts for 6% of conjoined twins, occurring in only 1 out of every 200,000 live births.

The 2020 ASEAN Film Week is taking place in Vietnam as part of activities to celebrate the country’s 2020 ASEAN Chairmanship.

The film week will screen nine films from nine ASEAN member countries, including eight feature films and one animated film.

The films are being screened in the three major cities of Hanoi, Da Nang and Ho Chi Minh City.

Mai Hoang My Trang has claimed the national women’s singles title for the 12th time.

My Trang teamed up with Le Dinh Duy take the top honour in the mixed doubles title.

Duc Tuan from VICEM HT Hai Duong and My Trang from Ho Chi Minh City were crowned in the men’s and women’s single events.

The construction of the Border Propaganda Information Cluster commenced in 2009 on an area of 16,000m2 and concluded in October 2013.

The cluster located at Sa Vi Cape is the first point of the S-shape map of Vietnam and includes a square, a main project complex and a service area.

GENEVA — The World Health Organization (WHO) on Monday listed AstraZeneca and Oxford University’s COVID-19 vaccine for emergency use, widening access to the relatively inexpensive shot in the developing world.

“We now have all the pieces in place for the rapid distribution of vaccines. But we still need to scale up production,” Tedros Adhanom Ghebreyesus, WHO Director-General, told a news briefing.

“We continue to call for COVID19 vaccine developers to submit their dossiers to WHO for review at the same time as they submit them to regulators in high-income countries,” he said.

A WHO statement said it had approved the vaccine as produced by AstraZeneca-SKBio (Republic of Korea) and the Serum Institute of India.

“In the first half of 2021, it is hoped that more than 300 million doses of the vaccine will be made available to 145 countries through COVAX, pending supply and operational challenges”, the British drugmaker said in a separate statement announcing the approval.

The listing by the UN health agency comes days after a WHO panel provided interim recommendations on the vaccine, saying two doses with an interval of around 8 to 12 weeks should be given to all adults, and can be used in countries with the South African variant of the coronavirus as well.

The WHO’s review found that the Astrazeneca vaccine met the “must-have” criteria for safety, and its efficacy benefits outweighed its risks.

The AstraZeneca/Oxford shot has been hailed because it is cheaper and easier to distribute than some rivals, including Pfizer/BioNTech’s, which was listed for emergency use by the WHO late in December.

Nearly 109 million people have been reported to be infected by the novel coronavirus globally and more than 2.5 million have died, according to a Reuters tally. Infections have been reported in more than 210 countries and territories since the first cases were identified in China in December 2019.

AstraZeneca’s vaccine makes up the lion’s share of doses in the COVAX coronavirus vaccine sharing initiative, with more than 330 million doses of the shot due to begin being rolled out to poorer countries from the end of February.

The WHO established its emergency use listing (EUL) process to help poorer countries without their own regulatory resources quickly approve medicines new diseases like COVID-19, which otherwise could lead to delays.

The COVAX Facility, which is co-led by GAVI, the World Health Organization, the Coalition for Epidemic Preparedness Innovations and the U.N. Children’s Fund, has said doses would cover an average of 3.3% of total populations of 145 participating countries.

GENEVA — An outbreak of Ebola in Democratic Republic of Congo and Guinea poses a regional risk that requires exceptional vigilance, a senior World Health Organisation official said on Monday.

Congo has confirmed four cases of Ebola since a resurgence of the virus was announced on Feb. 7 in Butembo, the epicentre of a previous outbreak that was declared over last June.

An Ebola vaccination campaign has begun in Butembo, in eastern DRC, the WHO said in a tweet on Monday.

The Ebola virus causes severe vomiting and diarrhoea and is spread through contact with body fluids.