The Hanoitimes – Vietnam is expected to export more than six million tons of rice this year.

“Such a high price indicates high quality of Vietnamese rice,” said Vice Chairman of Vietnam Food Association (VFA) Do Ha Nam, pointing out growing demand for rice from major markets, including the Philippines, as a key factor for higher prices.

Since the beginning of 2021, major rice buyers of the region, including China, Bangladesh and the Philippines are importing a large amount of rice. Meanwhile, Thailand, one of the world’s largest rice exporters, could see its export volume reduced this year given an appreciation of the Bath value.

Tran Thanh Hai, deputy director of the Ministry of Industry and Trade (MoIT)’s Import and Export Department, expected the current Covid-19 situation would be a major factor keeping high demand for rice in the global market.

As of January 18, the MoIT has issued rice export licenses for 205 traders.

The Hanoitimes – The restructuring aims to cut production costs and increase income for farmers.

Vietnam has gained positive changes in production and consumption of rice in its four-year project on restructuring rice industry, but there is still a lot of works to be done to achieve the goal of sustainable development and increase income for Vietnamese rice growers.

The statement was released at the conference on implementing the rice industry restructuring project until 2025, with a vision to 2030, which was organized by the Department of Crop Production, under the Ministry of Agriculture and Rural Development on December 25 in Ho Chi Minh City.

Speaking at the conference, Mr. Nguyen Nhu Cuong, Director of the Department of Crop Production said that some targets under the rice industry restructuring project such as ensuring food security, output and export turnover have been implemented. Meanwhile, others such as raising income for rice growers and building the national brand for Vietnamese rice still have not been fulfilled, he said.

Mr. Tran Xuan Dinh, technical consultant for the project, said that since the restructuring of rice production, although the paddy acreage has been declining year after year, production has remained stable at between 43 and 44 million tons per year. The sector has not only ensured food security, but also exports between 6 and 7 million tons of rice per year with a turnover of around US$ 3 billion.

Along with the reduction of the paddy acreage, the rice strain structure has changed positively, meeting the market demand. In the key rice production areas of the Mekong River Delta, the rate of using special aromatic rice varieties and high-quality rice increased from 2%-6%.

However, the rice restructuring strategy still has some issues, of which, the land use planning of each region has not been implemented thoroughly, the conversion from rice cultivated land to other crops is still slow; among others.

The productive organization lacks sustainability. The overuse of fertilizers and pesticides increases costs and negatively affects the environment. Sale of rice depends on traders with unstable prices and high risks, Mr. Dinh said. The quality of rice is not homogeneous, which affects the value and reputation of Vietnamese paddy.

To tackle the above limitations, the Department of Cultivation continues implementing the project in the direction of improving efficiency and sustainable development.

From the business view of point, the representative from Loc Troi Group shared his view that the rice industry restructuring is only effective when it helps cutting production costs and improving income for farmers.

Dr. Bui Ba Bong, former Deputy Minister of Agriculture and Rural Development, said that to effectively restructure the rice industry, it is necessary to synchronously implement three groups of solutions which are institutions and policies; science and technology development and investment in infrastructure. 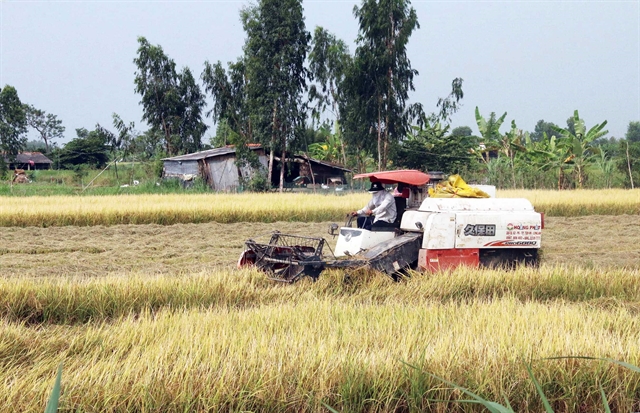 HCM CITY — Farmers in the Cửu Long (Mekong) Delta, the country’s rice granary, are having a bumper winter-spring harvest and getting high prices for their grain.

In Tiền Giang, farmers in the Gò Công freshwater zone have harvested around 4,000ha and got an average yield of 6.5 tonnes per hectare, 1.2 tonnes more than last year, according to the province Department of Agriculture and Rural Development.

Nguyễn Văn Mẫn, the department director, said farmers there sowed more than 21,800ha of rice, or 96 per cent of the target, almost all of it with fragrant and high-quality varieties.

The delta’s 12 provinces and Cần Thơ City had sowed the crop about one month earlier than normal to escape the impacts of saltwater intrusion and lack of freshwater during harvest.

Farmers grew 1.5 million hectares, slightly down from last year since in some places they were worried about possible saltwater intrusion and drought.

However, they have had sufficient water for irrigation.

In Cà Mau Province, they have harvested more than 2,000ha of the 36,000ha grown so far, according to its Department of Agriculture and Rural Development.

In Trần Văn Thời District, which has large areas under the rice-shrimp farming model, many farmers have started growing high-quality rice varieties like ST 24 and ST 25.

Both the rice and shrimp farmed under this model are clean since little chemical is used.

In Trần Văn Thời District, farmers are getting a high price of VNĐ9,000 for ST 25, which ranked first in the 2019 World’s Best Rice Contest.

In Hậu Giang Province, farmers are selling their rice at VNĐ500-800 a kilogramme higher than last year.

Trần Chí Hùng, director of its Department of Agriculture and Rural Development, said local authorities and farmers had been regularly warned about saltwater intrusion so that they would take proactive measures to protect themselves.

A salinity level of 0.39 per cent or more has been recorded in Vị Thanh City since the middle of this month while 0.24 per cent has been found in Long Mỹ District.

Most rice varieties can only cope with a salinity level of up to 0.1 per cent.

The peak saltwater intrusion in the delta this year is forecast between February 25 and March 4.

Farmers are expected to complete harvest of the rice crop by May, according to the Ministry of Agriculture and Rural Development’s Plant Cultivation Department. — VNS

The Philippines remained the leading importer of Vietnamese rice in the first month of 2021, accounting for 48% of Vietnam’s total export volume and revenue.Despite a decline in rice exports to the Philippines in January, the export price rose slightly by 2%.

According to rice traders, the fall in export volume and revenue in the first two months of this year is normal andnot a worrisome problem. According to the United States Department of Agriculture (USDA), world rice reserves as of early 2021 are quite large at about 178.3 million tonnes, much higher than the figure of 150.6 million tonnes in early 2018.

The information was released at a meeting organized by the Ministry of Agriculture and Rural Development on the agricultural production in the early 2021 season on February 18.
Presently, traders are proposing VND6,800-VND7,000 per kilogram of high quality unhusked rice; VND7,000- VND7,500 a kilogram of fragrant unhusked rice and VND7,500-VND8,000 per kilogram of sticky rice. With such prices, farmers enjoy profit of approximately VND30 million (US$ 1,301) a hectare of paddy. As scheduled, farmers in the Mekong Delta will harvest 550,000 total hectares of paddy in the end of February.
Le Thanh Tung, Vice Head of the Department of Crop Production under the Ministry of Agriculture and Rural Development, said that the Mekong Delta region has planted more than 1.5 million hectares of paddy for the winter-spring season, a decrease of 30,000 hectares compared to prior winter-spring season with productivity of nearly 69.31 quintal per hectare of paddy and an output of 10.5 million tons.
Associate Professor Tran Ba Hoang, Head of the Southern Institute of Water Resources Research, noted that saltwater penetration is 6- 13 kilometer farer than previous years. In Ham Luong River, Co Chien River, and Hau River, saltwater can intrude 56km, 51 km, and 45 km further inland respectively.
It has been forecast that the coastal areas in the region will face shortage of fresh water in the end of February and March causing difficulties for production and residents’ daily life. Around 37,800 hectares of winter-spring season and 40,000 hectares of fruit orchards in coastal districts in the region will suffer water shortage.
Therefore, the Southern Institute of Water Resources Research proposed provinces in the Mekong Delta to reserve fresh water for the dry season as well as re-structure agricultural plan appropriately especially in coastal districts. Local administrations should quickly build dams to fight against saltwater intrusion and reserve water in canals and irrigation ditches for fruit orchards.
Moreover, local administrators should keep an eye on drought and salinity development to have timely announcement for farmers in a bid to avoid losses.
Agriculture Deputy Minister Le Minh Hoan said that in the upcoming time, the Mekong Delta needs a long-term strategy for agricultural production with focus on linking 13 departments of agriculture and rural development to share experience in battle against drought and saltwater intrusion.
Additionally, he said that a center to introduce agricultural products of the Mekong Delta should be set up in Hanoi in order to increase consumption. Presently, Dong Thap Province is the first locality in the Mekong Delta which has built a center to introduce agricultural products in Vietnam’s capital city having good sign at first. 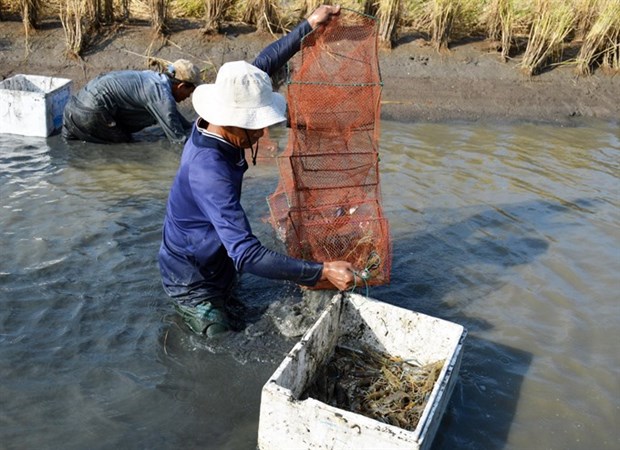 HCM City (VNS/VNA) – Farmers in the Mekong Delta have had a bumper harvest of giant river prawns at good prices because of favourable weather conditions and high market demand.

Under a special cultivation model, farmers breed the giant prawn and grow rice on the same field without using chemicals. The prawns eat natural food in the rice fields.

Le Viet Thang, who has a one-hectare rice field in Soc Trang’s Phuoc Long District, said he had a rice yield of seven tonnes per hectare, higher than in the past.

The profit from harvesting prawn and rice this year was about 50 million VND (2,150 USD) per hectare, he said.

Tran Van An, Deputy Chairman of the Phuoc Long district People’s Committee, said the rainy season ended late, so there was enough freshwater for the rice fields.

In the rainy season, Bac Lieu has nearly 36,000ha of fields allocated for the shrimp – rice farming model, up nearly 3,000ha against the previous rainy season.

Of the figure, farmers have harvested more than 20,000ha so far.

Huynh Van Dung, head of the Kenh 6 Hamlet Farmers Association, said: “The model has high economic efficiency, is easy to implement and is sustainable, so many farmers have done it.”

Farmers buy giant river prawn fry in Ca Mau and other provinces such as An Giang province and Can Tho city for breeding, he said.

The price may increase significantly near Tet (Lunar New Year), which falls on February 5 this year, according to traders.

Chau Thanh has more than 1,100ha of rice fields in which farmers breed all male giant river prawns, the largest in the province.

Nguyen Thanh Thuong, Deputy Chairman of the Long Hoa communal People’s Committee in Chau Thanh, said this is the sixth year that many farmers in the commune have bred giant river prawn and organic rice on one field.