This year Poland is celebrating the 230th anniversary of the adoption of the Constitution of May 3 – the second written act of this type in the world after the American Constitution. It was a momentous piece of legislation and an important reference point for further such acts internationally.

The Constitution of May 3 was even hailed as one of the first sources behind the idea of the European Union. For Poles, it is one of the most important events in the country’s history and a prominent symbol of successful co-operation in spite of differences.

The spirit of international co-operation that this anniversary evokes brings to mind also the achievements and potential of the longstanding close co-operation between Poland and Việt Nam.

Poland was one of the first countries to establish diplomatic relations with Việt Nam in 1950. Poland was also the only country that took part in both international commissions on supervision and control in Việt Nam, following the Geneva Accords of 1954 and the Paris Peace Accords of 1973.

Polish Embassy handed over 10 multi-functional screens and 10 computers to the Việt Nam-Poland High School in Hà Nội on October 28, 2020. Photos courtesy of the embassy

During the challenging times of war and post-war reconstruction, Poland implemented countless bilateral co-operation projects in Việt Nam, some of which have grown to symbolise Polish-Vietnamese friendship – for instance the Polish-Vietnamese Friendship High School in Hà Nội, the Polish-Vietnamese Friendship Hospital in Vinh, or the preservation and restoration of priceless monuments in Hội An, Huế  and Mỹ Sơn. In fact, in 2021 we are celebrating the 40th anniversary of the first arrival of Polish restoration specialists to Việt Nam, under the leadership of Kazimierz Kwiatkowski (“Kazik”), still one of the most celebrated foreigners to have lived and worked in Việt Nam.

Through generations of such efforts, a vibrant and prosperous Vietnamese community in Poland has grown to become one of the largest in Europe. The interpersonal bonds that have arisen between our two nations over the past seven decades constitute a solid foundation for the development of our relations in the future. Today Poland and Việt Nam co-operate on many levels – political, economic, cultural, scientific, and educational.

Mutual contacts have been maintained at every political level, even in spite of adverse conditions caused by the COVID-19 pandemic. For example, on April 20, there took place a telephone conversation between the Polish and Vietnamese ministers of foreign affairs. Last year, we celebrated the 70th anniversary of establishing diplomatic relations with a Polish painting exhibition at the Vietnamese National Museum of Fine Arts in Hà Nội. In November 2020, political consultations were held online at the level of deputy foreign ministers, and the ministries of finance of Poland and Việt Nam signed a memorandum of understanding on cooperation in the field of taxation and public finance.

Despite the pandemic and the global economic crisis, the value of our economic exchange has also been gradually increasing.

According to Polish statistics, trade turnover between Poland and Việt Nam in 2020 reached US$3.7 billion. For comparison, in 2019 it amounted to $3.5 billion, and in 2018, $3.3 billion. The EU-Việt Nam Free Trade Agreement (EVFTA), which entered into force in August last year, also offers great opportunities for further development of mutual economic relations.

This positive dynamic would not have been possible without the interpersonal ties that stem from the many years of co-operation in the field of tertiary education. More than 4,000 Vietnamese students graduated from Polish universities between the 1950s and the end of the 1980s. Today, a growing number of Vietnamese students decide each year to undertake studies in Poland (mostly in English-language programmes). Some of them benefit from the pool of government scholarships and scholarship programmes offered by the National Agency for Academic Exchange, including Banach and Ulam scholarships. It is worth noting that in 2019 and 2020 Polish language courses have been launched at the University of Hà Nội and at the University of Mining and Geology in Hà Nội.

Poland and Việt Nam have shared a close and longstanding relationship. In Poland, we look forward to building on this rich tradition of close co-operation with Việt Nam in order to forge ever-closer bilateral ties in the years to come. VNS 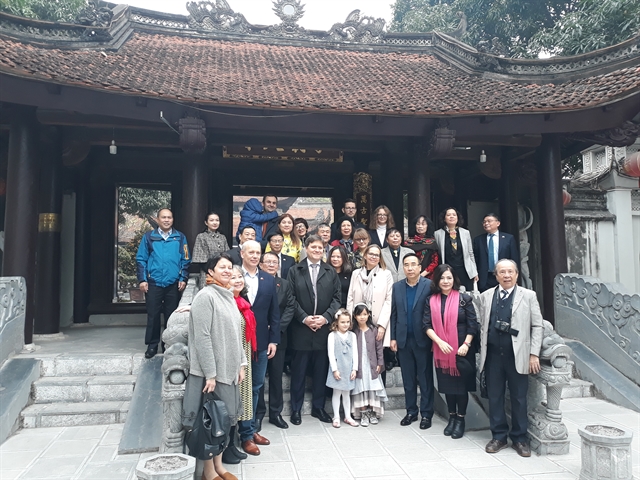 Polish ambassador Wojciech Gerwel (5th from right), together with his family, embassy officials and members of the Vietnam – Poland Friendship Organisation pose for a photo when they visited Bắc Ninh Province on January 23.

Liem did not start well on the first day of competition (April 24), earning just two points after five games – one win against Johan-Sebastian Christiansen (Norway), two draws with Hikaru Nakamura (US) and Alireza Firouzja (Iran), and two losses against Magnus Carlsen (Norway) and Jan-Krzysztof Duda (Poland) – settling for 13 th position amongst the 16 participants.

However, the Vietnamese star delivered an exceptional performance on the second day (April 26) with three wins over Indian prodigy Rameshbabu Praggnanandhaa (India), Shakhriyar Mamedyarov (Azerbaijan) and Gawain Jones (England), and two draws against Wesley So (US) and Sergey Karjakin (Russian).

This brilliant display brought Liem into the top four with six points ahead of the last qualifying day (April 27).

The Vietnamese grandmaster entered the Tuesday competition knowing he would need 2.5 more points to be guaranteed a quarterfinal berth. And he did it with a game to spare.

Liem tied with Leinier Dominguez (US) in Round 11 before punishing Indian Vidit Santosh Rujrathi’s mistakes to win his Round 12 match. In the next two rounds, he scored two successive draws against Teimour Radjabov (Azerbaijan) and Aryan Tari (Norway), which was enough to put him through despite a final-round defeat to Levon Aronian (Armenia).

Liem was equal with Alireza Firouzja and Teimour Radjabov on 8.5 points but stood one place above Radjabov thanks to better auxiliaries.

In the quarterfinals, to be played on April 27-28, Liem will take on Hikaru Nakamura, who finished second in the qualification phase.

Chess king Magnus Carlsen topped the table with 10.5 points and will meet Teimour Radjabov in the knockout stage. The two other quarterfinal clashes are Alireza Firouzja vs Shakhriyar Mamedyarov and Wesley So vs Levon Aronian.

New in Chess Classic offers a total prize fund of US$100,000, with the overall champion to be awarded US$30,000. The 16 participating players will compete against one another in a single round robin tournament to decide the top eight for the knockout round.

Vietnamese athletes have been forced to cancel their flight to Poland in order to compete in the World Athletics Relays as a way of qualifying for the upcoming Tokyo Olympics due to the impact of the COVID-19 pandemic.

Initially World Athletics Relays had been planning to welcome a total of 560 athletes from over 30 countries worldwide.

They had been due to depart on April 29 and compete in the mixed 4x400m event during the World Athletics Relays which were held on May 1 and May 2 in Poland.

Due to the complicated spread of the COVID-19 pandemic globally, the national team was forced to cancel their trip, thereby missing out on the chance to secure further places to compete in the 2021 Tokyo Olympics.

Currently, Vietnam has six slots for its athletes to participate in the Tokyo Olympics this summer. They are two gymnasts Le Thanh Tung and Dinh Phuong Thanh, swimmer Nguyen Huy Hoang, boxer Nguyen Van Duong, and archers Nguyen Hoang Phi Vu and Do Thi Anh Nguyet, all of whom have successfully qualified.

Vietnam’s Ministry of Health announced 18 locally-transmitted cases, including 14 at a hospital, on Wednesday.

The 14 patients include one medical worker, four caretakers, and nine patients treated for other illnesses at the Dong Anh District branch of the National Hospital for Tropical Diseases in Hanoi, the health ministry elaborated.

The institution is a central-level hospital that tends to COVID-19 patients. It has been locked down following the detection of the contagion.

Another domestic case was logged in the capital city as well.

Each of the other three infections was registered in Quang Nam Province, Dong Nai Province, and Hai Duong Province.

All of them had been quarantined since arrival in Vietnam by plane or ship.

Vietnam has logged 3,022 coronavirus patients, including 1,626 local cases, since the virus first struck the country on January 23, 2020, according to the health ministry’s data.

Recoveries have numbered 2,560, while 35 patients have died, most suffering critical underlying conditions.

Fifty-six local infections have been recorded in the country since April 27.

Vietnam is still closing its borders to international arrivals but it takes in foreign experts, diplomats, and Vietnamese repatriates.

All are required to undergo different forms of isolation upon entry.

The health ministry on Wednesday decided to increase centralized quarantine time to 21 days from the previous 14-day period, as there had been cases where people were confirmed as coronavirus patients shortly after leaving isolation centers.

The new regulation is applicable from the same day.

Hanoi, Ho Chi Minh City, and other provinces have closed non-essential services such as karaoke parlors, nightclubs, discos, and online game centers to stall the virus.

Vietnam has requested provincial governments to test all people coming from epidemic-hit countries and territories from March 14 for novel coronavirus detection.

Besides being quarantined for 14 days, those arriving in Vietnam from or through Schengen states will undergo Covid-19 tests for early detection, VnExpress quoted the National Steering Committee for the Prevention and Control of Covid-19 as saying.

It is expected that in the coming days, there will be an upsurge in the arrival of Vietnamese residing overseas who return to the home country from countries and territories hit by the Covid-19 pandemic.

The National Steering Committee for Prevention and Control of Covid-19 has requested municipal governments to test all those returning from epidemic-hit countries and territories from March 14 for novel coronavirus infection.

Those testing positive for nCoV will get immediate treatment while others will be quarantined for 14 days.

The Ministry of Transport is responsible for timely checking the number of flights, passengers, their information and estimated landing time and airports of landing before informing other ministries and local authorities to prepare and manage quarantine zones.

Airlines have been instructed to inform their customers about Vietnam’s preventive measures and regulations.

The Ministry of Defense will arrange quarantine zones and transportation for people coming from or through these countries.

The Ministry of Public Security will speed up immigration procedures to prevent large concentration of people at the airports.

The People’s Committee of Hanoi on March 14 also called on people coming from the epidemic-hit areas from March 1 to contact the health authorities for free nCoV testing.

As of March 15, the world recorded 157,233 infection cases in 148 countries and territories. Vietnam has detected 37 new cases over the past week, raising the total number so far to 53. Of them, 16 recovered and were discharged from hospital by February 26.