Didier Deschamps’ France head to Munich for the Group F game with a feud brewing between forwards Kylian Mbappe and Olivier Giroud but are still the title favourites, while the Germans are struggling and under pressure.

After 15 years in charge, their coach Joachim Loew will step down after the European Championship and wants to forge a mentality “like 2014” when his squad “pulled together” to win the World Cup.

The French need no reminding of Brazil, where they bowed out in the quarter-finals when a Mats Hummels header sealed victory for Germany at the Maracana Stadium in Rio de Janeiro.

The French got their revenge when Antoine Griezmann scored both goals in a 2-0 semi-final win at Euro 2016 before the hosts lost to Portugal in the final.

France won the last meeting between the neighbouring countries in 2018 when Griezmann again scored both goals to seal a 2-1 Nations League win in Paris.

Germany face a tough start to Euro 2020, with a match against holders Portugal four days after the France game before finishing their group campaign against Hungary.

Tension is already bubbling in the French squad after Giroud, who scored twice off the bench in a 3-0 friendly warm-up win over Bulgaria, complained about the passes he received, which Mbappe took to heart.

It promises to be a heated match after Chelsea defender Antonio Ruediger admitted Germany may need to be a “little dirty” to counter the French attack.

“Germany have good, young players and I don’t believe they are as weak as they were,” said France’s Bayern Munich defender Benjamin Pavard.

Loew, 61, is desperate to land Germany a record fourth European title and enhance his reputation, dented after his side failed to get out of their 2018 World Cup group.

Three years after that debacle in Russia, Loew must hope his shaky defence can cope with France, who could name a fearsome front three of Mbappe, Griezmann and the re-called Karim Benzema.

The Germans are expected to play with a 3-5-2 formation in an attempt to counter France’s obvious threat.

Loew has assured fans that his players will wear the shirt “with pride”.

“(We will) have to go through hell and be capable of suffering if we want to achieve something. We will give everything,” he said.

Germany reached at least the semi-finals of every major tournament from the 2006 World Cup to Euro 2016, but the last three years have been bleak.

After the World Cup disaster, they finished bottom of their 2018-19 Nations League group, were thrashed 6-0 by Spain last November and slumped to a 2-1 home defeat by minnows North Macedonia in World Cup qualifying in March.

“The blows of the last three years have left their mark,” admitted centre-back Hummels, who along with Thomas Mueller has been recalled after Loew reversed his 2019 decision to axe the pair.

Bayern’s Joshua Kimmich says the team are seeking redemption from their own fans.

“We have only disappointed people over the last few years,” he conceded. “We can’t always hide and say that we have a lot of quality. Now it’s up to us.” 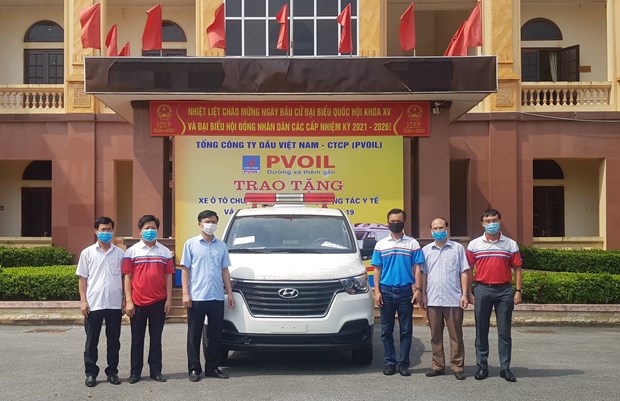 Hanoi (VNA) – The Vietnam Oil and Gas Group (PetroVietnam) has donated 30 billion VND (1.3 million USD) to the COVID-19 vaccine fund in a bid to join hands with the nation to fight the pandemic as well as ensure social welfare and people’s wellbeing.

Following the directions of the Politburo and the Secretariat of the Communist Party of Vietnam on the policy of purchase of vaccines against COVID-19 for the people using the state budget and other legal financial sources, the Government issued a resolution on COVID-19 vaccine purchase and use. Per the resolution, 150 million doses of vaccines will be bought for the injection of about 75 million people. It is estimated to cost some 25.2 trillion VND (1.08 billion USD). Of the total, about 16 trillion VND is expected to come from the central budget, while the remaining 9.2 trillion VND will be sourced from the local budgets and contributions by businesses and organisations.

In order to meet the urgent requirements of pandemic prevention and control, and speed up access to buying and importing vaccines for large-scale vaccination, the Ministry of Finance has asked for Government permission to set up a COVID-19 vaccine fund. The fund aims to receive funding from domestic and foreign organisations and individuals, as well as other legal capital sources for the purchase of vaccines against COVID-19. 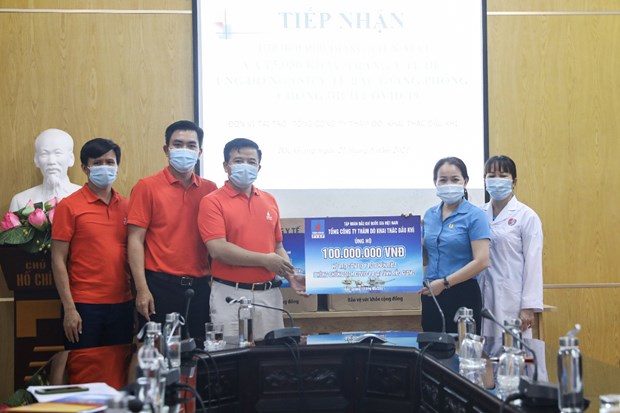 In addition to the above-said units, PetroVietnam will continue to call on its other members to support the vaccine fund.

On the occasion, the group also earmarked 2 billion VND which was raised from its staff to assist the northern provinces of Bac Giang and Bac Ninh, which are the nation’s current hotspots of COVID-19 outbreaks, in the fight against the pandemic.

Its member units and trade union also donated hundreds of millions of VND and items to support front-line medical staff and localities in the effort.

Earlier, to protect the health of 56,000 oil and gas workers amid the complicated developments of the pandemic, PetroVietnam’s trade union offered its members 2.8 billion VND to buy medical supplies and necessities for COVID-19 prevention and control.

So far, staff of the oil and gas sector donated over 70 billion VND to the fight against the pandemic.

The number of domestically-transmitted COVID-19 cases in Vietnam has risen to 4,621 cases, with 24 patients confirmed in the past 12 hours to 6am on May 27, according to the Ministry of Health. Of the new cases, 23 were recorded in Bac Giang province, and one in Lang Son.

As many as 3,051 domestic cases have been logged since the nation was hit by the fourth COVID-19 wave on April 27. Another case was added to the imported infection tally on May 27 morning, raising the imported count of the outbreak to 1,490.

Report from the ministry’s Medical Examination Administration showed that the country has seen 2,853 recoveries and 45 deaths related to the disease. 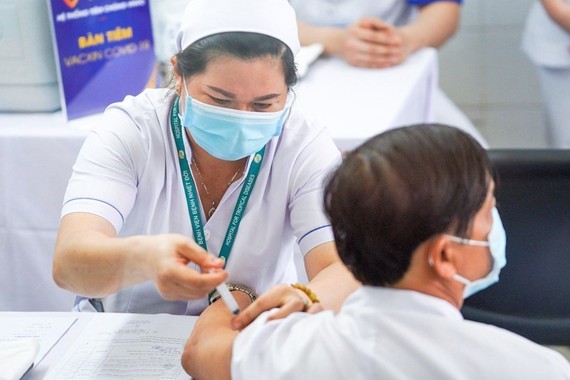 However, according to the infectious disease specialist, vaccination is of great important strategy in the fight against coronavirus pandemic.

According to Professor Hien, the Hospital for Tropical Diseases is the southern metropolis’s frontline facility in the Covid-19 fight. Moreover, this will be the medical facility for Covid-19 in the city, which means that the hospital will admit more Covid-19 patients.
A protective effect seen in AstraZeneca recipients reaches 61 percent effectiveness after 28 days. This is a survey conducted by RT-PCR on 159,930 adults aged 70 years and over in the UK between December 2020 and February 2021 when the B1.1.7 strain was emerging.
Citing the conclusion of the document published in The Lancet, an independent, international weekly general medical journal, on December 8, 2020, Prof. Hien said that the Oxford/AstraZeneca Covid vaccine is safe and effective, giving good protection.
According to Professor Hien, the Hospital for Tropical Diseases needs to minimize the spread to health care workers’ relatives, friends and especially to patients in the hospital. The power of vaccines is undeniable as vaccination has been reducing infection cases in the US, the UK, Israel and the only way to get out of the pandemic is to get a good quality vaccine as much as possible.
Vaccination helps patients infected with Covid-19 not become serious or succumb to the disease. Moreover, vaccination helps keep the rate of infected people without symptoms at 50 percent- 60 percent. Therefore, vaccination is a key to reach herd immunity.

Hanoi authorities have decided to temporarily shut all local street food and refreshment stalls and coffee shops from 0:00 on February 16.

The move followed the infections related to a Japanese man who tested positive for Covid-19 after he had died at a local hotel.

The city has also closed all local historical relics from 0:00 on February 16, said Vice Chairman of the Hanoi People’s Committee and head of the municipal Steering Committee on Covid-19 Prevention and Control Chu Xuan Dung. The 54-year-old Japanese patient, an expert of Mitsui Vietnam Co., Ltd, entered Vietnam on January 17 via Tan Son Nhat International Airport in Ho Chi Minh City. After two tests which showed negative results, on February 1, he flew to Hanoi and stayed at the Somerset Westpoint Hotel.

Around 7pm on February 13, he was found dead in his hotel room. His sample tested positive for the novel coronavirus SARS-CoV-2 on February 14. The cause of his death is under investigation.

Two people who had come into close contact with him have also tested positive for the virus. One is a Japanese 43-year-old man and the other is a woman in Hanoi.

Dung cited the Hanoi Centre for Disease Control as saying that the city is facing the high risk of Covid-19 infection related to the 54-year-old Japanese patient.

Concerned agencies in Hanoi are working urgently and drastically to screen F1 and F2 cases of him, he said.

Nguyen Khac Hien, director of the Hanoi Department of Health, said many people still do not wear a face mask in public places. Meanwhile, people gather in crowds. He urged for stricter punishment for those violating guidance. 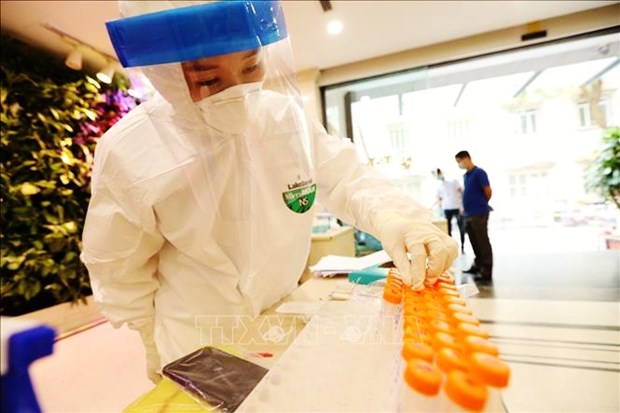 
Hanoi (VNA) – Vietnam domestically recorded 57 more COVID-19 infections over the past 12 hours to 6:00am on May 25, according to the Health Ministry.

The cases comprised 45 in Bac Giang, two in Bac Ninh, four in Hanoi, four in Lang Son, and two in Ha Nam.

The new infections brought the national tally to 5,461, including 3,975 domestically-transmitted cases. The number of new patients posted since on April 27 when the latest wave of outbreaks hit the country amounted to 2,405.

Vietnam’s total number of recoveries from the coronavirus SARS-CoV-2 reached 2,794. The death toll stood at 44.

Among active patients, 70 tested negative to coronavirus once, 41 twice, and 69 thrice.

The entire nation saw 165,935 people under quarantine and health monitoring across hospitals, residencies and other facilities. 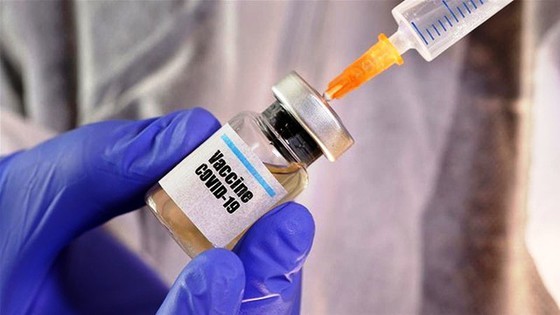 The ministry’s Administration of Science Technology and Training (ASTT) said on June 12 that two domestic manufacturers are working on Covid-19 vaccines. In particular, Nanocovax by the Nanogen Pharmaceutical Biotechnology JSC has been approved for the third stage of clinical trials, which will be carried out by the Military Medical University and the Ho Chi Minh City Pasteur Institute right there and in Hung Yen, Long An and Tien Giang provinces and several qualified units.
About 13,000 people will be chosen for the phase.
Another candidate is COVIVAC by the Nha Trang Institute of Vaccines and Medical Biologicals (IVAC) which is under the first stage of clinical testing. The second stage is scheduled to take place in Thai Binh province.
The IVAC plans to produce about 6 million doses each year while Nanogen expects to manufacture around 20-30 million doses annually.
According to the ASTT, the Health Minister on May 7 issued Decision No.2301/QD-BYT on the establishment of a steering committee for a research programme on Covid-19 vaccine technology transfer and production.
Vingroup negotiated with a US manufacturer to transfer the technology of producing vaccine from mRNA which requires only one shot of 5mg. Its plant will be capable of producing 100-200 million doses each year, starting from the fourth quarter of this year or the first quarter of next year.
At present, the Company for Vaccine and Biological Production No.1 is stepping up negotiations with a Japanese partner to transfer technology to Vietnam.
It also signed a deal with a Russian investment fund for the sale of 5 million doses of Sputnik-V vaccine each month, towards transferring technology with an annual capacity of 100 million doses.