Two schools in the northern province of Bac Ninh have had to temporarily close due to being seriously flooded by wastewater discharged from nearby production facilities. This morning, April 29, more than 1,400 students in total from Phong Khe Primary School and Phong Khe Secondary School in Bac Ninh City had to stay home as the schools were being inundated.


Tong Ngoc Thang, headmaster of Phong Khe Secondary School, said that bad-smelling wastewater had started appearing at the school since April 28. Today, the water has not yet gone down, so the school decided to temporarily shut down.

According to Le Van Tan, chairman of Phong Khe Ward, local authorities requested some local paper producers to dismantle all of their illegal waste treatment systems linked to Ngu Huyen Khe River. This has caused the wastewater spill into surrounding areas, including the schools.

“We have used pump systems to deal with the flooding, but the big ones have faced technical problems. Small pumps have been used instead. We are fixing pumps with high capacity which can help to tackle the flooding within an hour,” Tan added.

Local authorities will continue to tighten control over the waste treatment of producers in the ward and offenders will only be allowed to operate if they ensure they are correctly treating their wastewater.

At a meeting of its Steering Committee for Covid-19 Prevention on Friday afternoon, Tran Xuan Duong, vice chairman of the province People’s Committee, said students’ safety must be ensured and schools need to hold classes online for the year-end and high school graduation exams from May to July.

By Friday afternoon, seven people in Ha Nam had been diagnosed with Covid-19, all related to the outbreak in Dao Ly Commune in Ly Nhan District.

Nguyen Thanh Duong, director of the Ha Nam Center for Disease Control, said the province has 10 cases of Covid-19, three of which the Ministry of Health has not announced yet. The three were in quarantine and on Saturday morning, they were tested positive for the coronavirus once.

The outbreak began when patient 2899, a 28-year-old man, returned to Vietnam from Japan on flight VJ3613, arriving at Da Nang Airport on April 7 and being quarantined on entry.

After 14 days of quarantine and three negative tests, he returned to Ha Nam on April 22. But on April 24, he began to cough and have a fever and sore throat, and tested positive for Covid-19 on April 29.

Six grade-seven students were playing football on their school’s ground in Vietnam on Saturday afternoon when a lightning strike suddenly hit them, killing one, local authorities reported.

Ho Van Nhiet, chairman of a commune in north-central Quang Tri Province, confirmed on Saturday evening that the local government had handed over the body of the student to his family for burial.

The fatal incident happened at 3:00 pm the same day when a rainstorm together with a thunderstorm was striking the area.

Locals who witnessed the lightning strike took all the six students to hospital for emergency treatment, but Th. could not survive.

Among the five remaining victims, one was injured and needed treatment, while the others were shocked only.

Another schoolboy died due to lightning on Wednesday last week in Ha Tinh Province, located in the north-central region, when he was riding a bicycle home from school.

The fatality happened at around 4:30 pm on April 26, when a lightning strike knocked down 10-year-old Nguyen Duy Tr. when he was only 200 meters away from home.

Tr. was taken to a health center for emergency aid but he passed away later.

Hanoi authorities have just decided to close all schools from kindergarten to high school levels from May 4 until next announcement in a latest move amid complex COVID-19 evolution.

Under the decision, schools will switch to online learning, the city’s Department of Education and Training said.

Earlier the same day, the city ordered relic and religious sites, street eateries, iced tea stalls, and cafes to close doors from 5:00 pm on Monday to prevent the risk of COVID-19 transmissions.

Meanwhile, restaurants and coffee shop serving customers indoors shall have to erect dividers between seats or ensure customers are one meter apart from each other. The capital city asked these establishments to encourage takeaways.

The municipal authorities also asked all returnees to make health declaration after four-day public holiday, starting from April 30 to May 3.

All karaoke parlors, bars, discotheques and game rooms in the capital city were ordered to close from April 30.

Another Hanoian infected with SARS-CoV-2

Late on May 3 the Hanoi Centre for Disease Control confirmed another local resident has been diagnosed with the SARS-CoV-2 virus closely linked to two Chinese infections.

Earlier on May 2 the Ministry of Health issued an urgent telegram, looking for passengers on flight VN160 from Da Nang to Hanoi, after two Chinese citizens on board the same flight were diagnosed with the virus.

During the past four days, Hanoi capital has recorded four coronavirus infections, including three living in the outlying district of Dong Anh who were closely related to the coronavirus outbreak in Ha Nam province.

A series of recent school violence cases shows a lack of concern, knowledge and skills to protect children among educators, experts say. 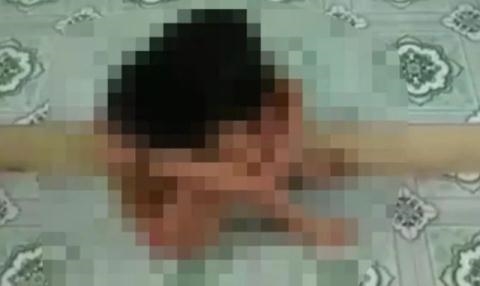 Y was brutally beaten (photo from a clip)

A ninth grade female student at the Phu Ung Secondary School in Hung Yen province was found stripped and brutally beaten by a gang of five classmates days ago.

The assault was so brutal that H. Y, the student, had to be hospitalized for psychological treatment.

The case was so serious that Minister of Education and Training Phung Xuan Nha in person came to Hung Yen to work with provincial leaders on the case.

Y’s grandmother, who is taking care of her at Hung Yen Hospital, told the press that she was angry at the violators, but even angrier with Y’s teachers and the school’s management board.

Nha emphasized that this was a heartbreaking incident, and the culprits, school’s management board members and involved individuals must be strictly punished.

Just days after the incident occurred, the provincial education department gathered all local teachers in an online meeting to discuss the problem.

The criticism from the public escalated after witnessing the indifference by the teachers and the school’s management board towards the student.

“I have been bullied for a long time and I made complaints to the head teacher, but the problem was not settled,” Y said.

Y’s grandmother, who is taking care of her at Hung Yen Hospital, told the press that she was angry at the violators, but even angrier with Y’s teachers and the school’s management board.

“The school knew about the bullying, but did not take measures to stop the activities. The teachers did not give warnings and discuss this with us. As a result, this heart-breaking scene has occurred,” she said.

“The bumps and scratches on my grandchild’s body will heal, but I am afraid the wounds in her mind and heart won’t,” she added.

On education forums, parents commented that Y’s teachers and the school’s management board need to ‘search their conscience’.

“Once children fight each other, adults need introspection, because children are the products of education from adults,” a mother in Cau Giay district wrote.

“Instead of cooperating with Y and her family to settle the problem, the school’s board of management and the head teacher tried to hide the truth and did not give true information about the incident to Y’s family,” she wrote. “This is unacceptable behavior for educators.”

Dang Hoa Nam, head of the Children Agency under the Ministry of Labor, War Invalids and Social Affairs, commented that school violence continues because of the adults’ “achievement disease”.

Teachers tend to conceal school violence cases instead of making them public and seeking support from the public. They fear that the cases will affect their so-called emulation achievements.

Hanoi authorities have decided to temporarily shut down schools amid the on-going Covid-19 outbreak.

The decision was issued by the municipal Department of Education and Training on Monday evening. The move is part of the city’s decision to suspend non-essential activities.

Students from kindergarten to high school levels will stay at home from Tuesday until the city’s Department of Education and Training’s further report. The requirement is also applied to centres that teach foreign languages and those providing foreign-invested short-term education.

According to the department, students will study online instead.

Before the Reunification Day (April 30) and May Day, Hanoi schools were urged to prepare online study plans in case of a Covid-19 outbreak. After the holiday, schools need to co-operate with student families on completing health declarations.

Hanoi has seen three locally-infected Covid-19 cases related to the pandemic outbreak in the northern province of Ha Nam. Meanwhile, the city is welcoming a large number of returnees from different localities nationwide after the Reunification Day and May Day holidays.

All historical and religious sites and sidewalk eateries in Hanoi had to close from 5pm on May 3. The city suspended bars and pedestrian streets earlier.