Vietnam is determined to cure a British pilot who has been in critical for more than a month.

Vietnam’s best experts and doctors are doing their utmost to cure a 43-year-old British Covid-19 patient who has been in critical condition for more than a month, Spokesperson Le Thi Thu Hang of the country’s Ministry of Foreign Affairs said at a press conference on May 14.

“We hope that the British patient will recover soon and return to normal life,” Hang said.

She added that with a humanitarian spirit, Vietnam has endeavored to treat many foreign Covid-19 patients since the outbreak of the pandemic. Most of them have recovered and returned home.

However, the CT (computed tomography) scan results on the Briton have shown that his lungs had turned to fibrosis and lost function, only 10% of his lung is active, the Hospital for Tropical Diseases in Ho Chi Minh City said on May 13.

The patient was admitted to Ho Chi Minh City Hospital for Tropical Diseases on March 20 after being confirmed to be positive on March 18. He has been on a ventilator for 16 days and put on Extracorporeal membrane oxygenation (ECMO), which involves pumping blood out of the body to a heart-lung machine that removes carbon dioxide and sends oxygen-filled blood back, for 39 days.

Previously, through online consultation with the Ministry of Health, a lung transplant was indicated for the British patient, who is a Vietnam Airlines pilot.

On May 12, Vietnam’s leading experts in organ transplants, active resuscitation and respiratory treatment once again met to seek treatment for the patient and still decided to conduct a lung transplant for him.

“We will try to do the best for the patient to keep him alive, not for the sake of keeping the record of no Covid-19 deaths in Vietnam,” a member of the expert group told Tuoi Tre newspaper.

The National Coordination Center for Human Organ Transplants said that there are currently 40 people volunteering to donate a part of their lungs to the British patient. None of them is acquaintance of the patient, but they have the desire to share a part of their body to save a human being.

The patient is the most severe Covid-19 case in Vietnam. Both of his lungs are condensed and test results for Covid-19 have come out negative and positive interleavedly multiple times, his liver enzymes level is high. He is currently being treated with antibiotics and dialysis and administered tranquilizers.

The Vietnam Airlines pilot was the first case of a cluster, the Buddha Bar and Grill in District 2, which turned out to be HCMC’s biggest Covid-19 outbreak with 19 cases.

Vietnam has recorded no Covid-19 deaths to date. The country has gone through 29 days without community transmission of the disease.

“From street vendors to champions of sustainability, from time-honoured institutions to pioneering newcomers, the Essence of Asia collection reflects the breadth of the continent’s gastronomic riches.

And at a time when the hospitality sector across Asia is emerging from a prolonged crisis, it provides travelers and gourmets with an invaluable guide to vibrant local dining spots while also celebrating some of the unsung heroes of the food community,” the website stated.

According to the Theworlds50best.com, Pho Bat Dan is a small restaurant in size but mighty in reputation, with many claiming it serves the finest pho or Vietnamese traditional  noodle dish in Hanoi.

It is best known for its beef pho, served with fresh slices of stewed beef, light rice noodles and crispy, savoury doughnut sticks that are born to be dipped to soak up the broth.

A family-run restaurant spanning four generations, Ngoc Suong originally opened as a casual seafood eatery in coastal town of Cam Ranh in 1955 when its founder was a village chief who served his locals socially, as well as with food.

Today’s restaurant, which opened in early 2020, is more modern and refined but still serves its community by cooking for those in need and acting as a meeting place for local musicians, foodies and business people. For the full experience, try chef Vinh Le’s tasting menu with its abalone trio and deconstructed hotdog.

Being a pizza restaurant with a twist, 4P’s is run by a Japanese couple and sells salmon sashimi pizza, teriyaki chicken pizza and even a vegan version with lotus and Japanese seaweed, as well as other fusion foods. While its combinations are unusual, it is a firm favourite with locals and now has 25 outposts across Vietnam.

Its owners are also local heroes, having fed front-line workers during the pandemic. The name 4P’s actually means ‘for peace’, reflecting its extensive sustainability practices and efforts to make the world a better place.

The Madam Khanh – The Banh Mi Queen is in Hoi An town, Quang Nam province.

Hailed as the best place for banh mi in Hoi An (and possibly in all of Vietnam), this casual shop has been run by Madam Khanh for more than 30 years.

The cook, now in her 80s, makes up to 200 baguettes a day, stuffing them with spicy, succulent fillings such as fried eggs with papaya and cucumber, or pork with barbecue sauce. Once you’ve tried one, you’ll have no doubt why they call her the banh mi queen.

Since 2002, The World’s 50 Best Restaurants has reflected the diversity of the world’s culinary landscape. Thanks to its panel of more than 1,000 culinary experts, as well as its structured and audited voting procedure, the annual list of the world’s finest restaurants provides a snapshot of some of the best destinations for unique culinary experiences, in addition to being a barometer for global gastronomic trends.

Previously, AFC chose 12 midfielders for the vote based on versatility, flair and outstanding individual quality.

Throughout Hanoi FC’s run at 2019 AFC Cup, the 22-year-old played an important role by producing consistent goals and assists, including two stunners in the inter-zone play-off semi-final against Turkmen side Altyn Asyr. Hanoi later lost to North Korean club 4.25 SC in the play-off final.

AFC praised Hai’s performance in AFC Cup 2019, calling it “simply devastating.” In 2021, he will return to AFC Cup with Hanoi. The capital club has been grouped in group G with Indonesia’s Bali United, Cambodia’s Boeung Ket and a play-off winner.

In November last year, Hai’s free-kick in the game with Altyn Asyr was named among the four best AFC Cup goals ever. It was also voted the best free-kick in AFC Cup history by fans in June.

This year, the AFC Cup group stage has been expanded by three teams to 39 with a new Central Asia Zone group. The first and second-placed teams of each group would advance to the next round.

The champions will be awarded a spot in the preliminary stage of 2022 AFC Champions League. 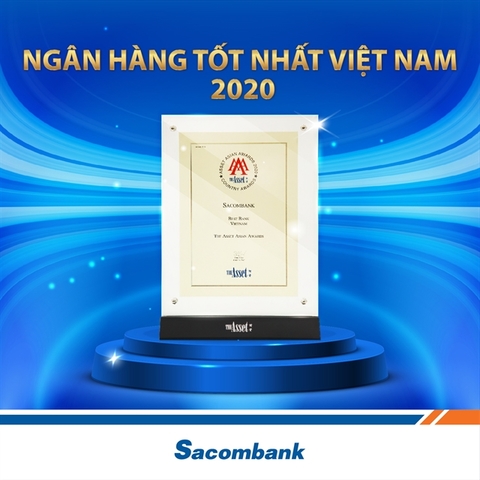 Sacombank has won for a fourth time the Best Bank Vietnam award from the Asset magazine.

The annual awards honour outstanding businesses and organisations in the banking, finance, treasury, and capital markets who contribute to the development of the financial sector in Asia.

The award jury hailed Sacombank for its 2020 strategy for attracting investment and customers and developing services and improving service quality.

The bank’s charter capital and network place it among the top five in Viet Nam.

It began digital transformation five years ago and has invested hundreds of billions of dong in modern technology platforms. — VNS

Two Vietnamese scientists have been listed in the 2018 edition of Asian Scientist 100 , an annual listing of the region’s top academics by the Singapore-based magazine.

Prof. Dr. Phan Thanh Son Nam from the Ho Chi Minh City University of Technology and Assoc. Prof. Dr. Nguyen Sum from Quy Nhon University were honored in the list for their accomplishments in chemistry and mathematics, respectively.

The Asian Scientist 100 list, which honors Asia’s top 100 researchers, academics and innovators, has been compiled and published by Singapore-based science and technology magazine Asian Scientist since 2016.

Each of the 100 honorees is qualified by having won a national or international prize in 2017 for their scientific research or leadership, according to the magazine’s website.

“Together, they represent the best of what Asia has to offer the scientific community at large,” an introduction to the list reads.

Both of the Vietnamese scientists were honored thanks to their winning of the 2017 Ta Quang Buu Awards, which is awarded by Vietnam’s Ministry of Science and Technology to local scientists with remarkable contribution to fundamental research in natural sciences and technology.

Dr. Phan Thanh Son Nam was the lead author of an excellent work on molecular catalysts in organic transformation.

Specifically, his work explored the application of metal-organic frameworks as catalysts for the synthesis of propargylamine organic matters.

The study, which Nam co-authored with four of his Vietnamese colleagues, has been cited 21 times in scientific research globally.

Meanwhile, Dr. Nguyen Sum was honored for his work on topology, a branch of mathematics dealing with properties of space that are preserved under continuous deformations.

Sum’s work was praised for its solving of a unique case of the famous Peterson hit problem, posed by U.S. mathematician Frank Peterson 30 years ago.

Colonial influences are reflected on the breakfast tables of Vietnam, with the local “fast food” breakfast of choice being banh mi , a small baguette sold on every corner, SCMP wrote.

The most basic and popular banh mi in Vietnam is a fusion of cold cuts and vegetables like coriander, cucumber, pickled carrots and daikon combined with condiments from French cuisine such as pate, chili and mayonnaise. However, a wide variety of popular fillings are used, including fried eggs, grilled pork, and meat balls.

The official origin of banh mi is yet to be verified, but many agree the idea was introduced to Vietnam in the mid-19th century, when the country was part of French Indochina, to become a staple by the early 20th century.

Banh mi is a symbol of Vietnam’s cuisine and has built quite a global reputation. The treat is typically eaten for breakfast or as a snack, with prices ranging from VND15,000 ($0.65) to VND50,000.

The dish was listed in the top 20 street foods one must try by the world’s largest travel site, Fodor’s Travel , in 2016. The U.S.-based publisher described it as “a mouthwatering sandwich that might best be described as a Vietnamese hoagie.”

The Vietnamese episode of a documentary series on Asian street cuisine aired on Netflix featured the banh mi from Saigon.

Other popular breakfasts in Asia listed SCMP listed include khao soi (flat noodles, ground pork, fresh herbs and vegetables with chili in a soup) in Laos, Thailand’s jok ( rice porridge with an egg and a garnish of ground chili, coriander and shaved ginger) and hoppers in Sri Lanka.