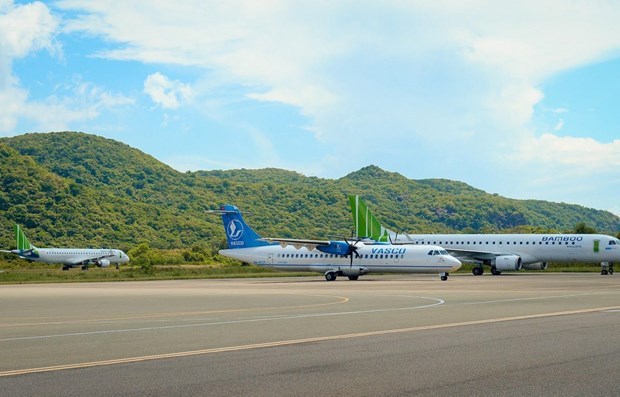 Hanoi (VNA) – The Civil Aviation Authority of Vietnam (CAAV) has sent a document to the Airports Corporation of Vietnam (ACV) proposing that research be made on the possibility of installing lights at Con Dao Airport in the southern province of Ba Ria-Vung Tau , to improve operational capacity.

The Con Dao Airport is located on Con Dao Island and investing in lighting for night operations is difficult due to weather and environmental conditions. As the airport is not permitted to operate 24 hours a day, flights only take off and land during the daytime.

According to the CAAV, this affects operational capacity at a time when Vietnamese carriers are opening more flights to Con Dao – one of the most beautiful and pristine islands in Vietnam.

FLC Group, the owner of Bamboo Airways, has proposed Ba Ria-Vung Tau province and the ACV approve funding for the installation of lights at the airport to allow it to increase flight capacity at night.

However, this figure is a bit lower than the Asia Pacific and global average of 65 percent and 64 percent, respectively, according to a survey conducted by PricewaterhouseCoopers (PwC), which interviewed 2,800 family business leaders in 87 economies, including 33 from Vietnam.

For 2022, 33 percent of surveyed family business leaders from Vietnam expect quick, aggressive growth, higher than the regional average of 28 percent and the global figure of 21 percent.

Business expansion and technology adoption are the key priorities of Vietnamese family businesses in the coming years, the survey found. While 55 percent said they would focus on creating new products and services, 52 percent mentioned increased use of new technology.

Over half (52 percent) of the Vietnamese respondents expect that the next generation to become majority shareholders within five years’ time, but just 36 percent said they have a formal succession plan in place.

Vietnamese family businesses seemed to lag behind in terms of digital capabilities, with just 30 percent saying they were strong in this area against the global average of 38 percent.

Family businesses are a core economic factor in any country, including Vietnam. The 100 largest family businesses contribute about 25 percent of the country’s GDP, Vu Tien Loc, Chairman of the Vietnam Chamber of Commerce and Industry (VCCI), has noted.

As many as 95 percent of Vietnamese enterprises are family businesses and the majority are led by the first generation or the first two generations, he added. 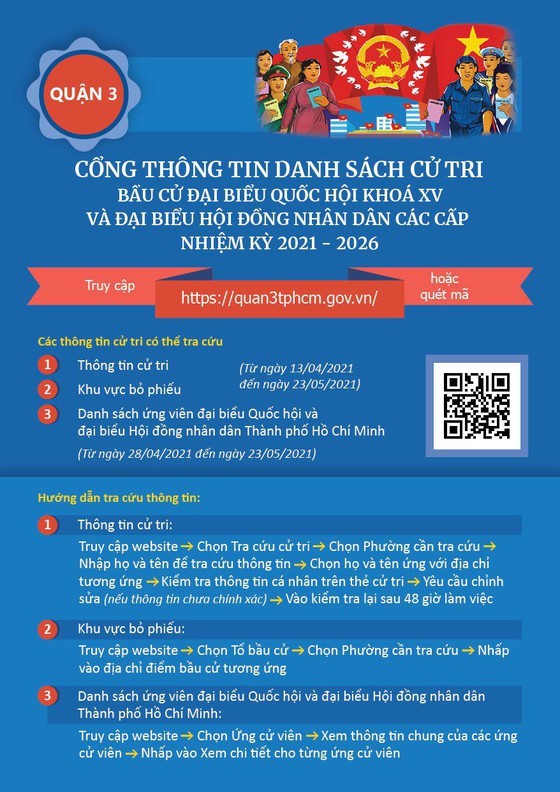 Receiving consensus from the public, these candidates are officially named in the election list, which is posted at 72 election locations of District 3. The voter list is also completed.

Noticeably, District 3 has launched a special information portal for the voter list at the address of quan3tphcm.gov.vn , along with a QR code so that the general public can check their personal information.

If there is a mistake, they can request information editing, which will be then passed to the corresponding wards for verification. Within 2 business days, the editing request will be fulfilled, less than the regulated time by 2 days.

District 3 also implements IT to publicize the voter list via its official Facebook fanpage and Zalo page, the Zalo groups of each neighborhood.

“Only after 2 days after activation, the portal welcomed around 3,000 visits, 60 of whom asked for information revision”, said Chairman Duc.

He then asked that the district continue to propagandize necessary election information to the community, especially those living in apartment buildings, so that all can actively join in the upcoming ‘Citizen Festival’ on May 23.

Chairman of District 1 People’s Committee Nguyen Van Dung also reported the current status of election preparation tasks. Accordingly, the district has finished hanging 213 banners and 21 panels in different locations. It has also distributed 9,600 pamphlets and 7,000 booklets of election regulations to its residents.

He then noted that the district should propagandize the content of Resolution No.131/2020 by the National Assembly and Decree No.33/2021 by the Government about establishing the urban administration in HCMC. Simultaneously, the community should be updated about legal regulations regarding the election process.

Lastly, he reminded that state officers who serve the election tasks must try their best to aid the public in fulfilling their voting duty and to ensure security at election locations.