The Vietnamese air carrier is optimistic about its capitalization prospects.

Vietnam’s airline Bamboo Airways plans to list shares on the stock market in the third quarter this year and expects a market capitalization of US$2.7 billion.

The airline, established in 2019, will list 105 million shares on either the Hanoi or Ho Chi Minh City Stock Exchanges with an initial price of around VND60,000 (US$2.6) apiece, Bamboo Airways Chairman Trinh Van Quyet told Bloomberg.

This is the second attempt of the Vietnamese air carrier to list its shares on the market. Its last year attempt was postponed due to the Covid-19 pandemic.

The benchmark VNIndex of Vietnamese stocks has increased 8.8% this year to a near three-year high. Meanwhile, the pandemic is under the control in Vietnam. “The market conditions are very favorable,” Bamboo Airways leader said.

Quyet predicted that the Vietnamese government will begin lifting bans on international commercial flights this summer and the company will begin flying to the US in the last quarter of 2021.

However, Nguyen Anh Duc from SSI Security Corporation said: “It would be “tricky” given the reluctance of some investors to bet on short-term growth for airlines.”

Quyet expected a big “boom” in the aviation industry given the rapid international vaccine rollout. “We are planning to increase Bamboo’s fleet from 22 to 40 planes in 2021.”

In 2020, the airline reported a 34% year-on-year increase in pre-tax profits to VND400 billion (US$17.2 million). It was among the few airlines which made a profit during the pandemic year.

The Vietnamese property developer FLC currently owns 39.4% stake of Bamboo Airways from 51.29%, after Bamboo Airways increased its charter capital to VND10.5 trillion (US$452.4 million) in February.

The carrier, which began operations in 2019, plans to list 105 million shares on either the Ho Chi Minh Stock Exchange or Hanoi Stock Exchange at an initial price of VND60,000 ($2.61), Bloomberg quoted its chairman, Trinh Van Quyet, as saying.

It had originally planned to list last year, but called it off due to the Covid-19 pandemic.

Since Vietnam has contained the pandemic and began vaccination at the beginning of March, Quyet said “conditions are very favorable” for listing. The benchmark VN-Index of Vietnamese stocks has rallied 8.8 percent this year to a near three-year high.

He expects the government to lift the ban on international flights in June or July this year.

The airline last year received permission from the U.S. to operate direct flights to that country, which it plans to start in the fourth quarter of this year.

It also plans to expand its fleet from 22 to 40 aircraft this year. Quyet expects the vaccination to help revive the aviation industry in 2021.

Domestic flights have resumed in Vietnam.

Prime Minister Nguyen Xuan Phuc this week instructed ministries to study the use of vaccine passports and consider the resumption of international flights.

Bamboo Airways pre-tax profit rose by 34 percent in 2020 to VND400 billion. It hopes to increase its market share by 10 percentage points this year to 30 percent.

HANOI — Vietnam’s startup Bamboo Airways said on Friday it aimed to list its shares on a local stock exchange in the third quarter and raise its domestic market share to 30% by the end of this year from 20% currently.

The company plans to list 105 million shares on either the Hanoi Stock Exchange or the Hochiminh Stock Exchange at an initial price of 60,000 dong ($2.60) each, potentially putting its market capitalisation at $2.73 billion, chairman Trinh Van Quyet said.

“Market conditions are ripe for the (listing) plan,” Quyet told Reuters in an emailed statement.

Bamboo Airways, which reported pre-tax profit of 400 billion dong in 2020, is targeting an expansion of its aircraft fleet to 40 by the end of this year from 28 currently, Quyet said.

Quyet said the airline, which is owned by property and leisure company FLC Group, is ready to resume international commercial flights once the government lifts a suspension due to the coronavirus pandemic.

“We hope the government will prudently reopen international commercial flights from the end of the second quarter or early third as the domestic outbreak has been effectively contained,” Quyet said.

Bamboo Airways also expects to receive supportive policies from the government to help it compete with regional rivals.

The airline has asked the government to arrange a loan of 5 trillion dong ($216.70 million) with low or zero interest rates via local commercial banks, the government said on Friday.

“Domestic airlines should be equal in accessing preferential loans, doesn’t matter if it’s a private or state-owned firm,” Quyet said.

The central bank earlier this month said it was planning to provide an interest-free loan of up to 4 trillion dong to Vietnam Airlines to help the loss-making flag carrier weather the wide impact of the coronavirus pandemic. 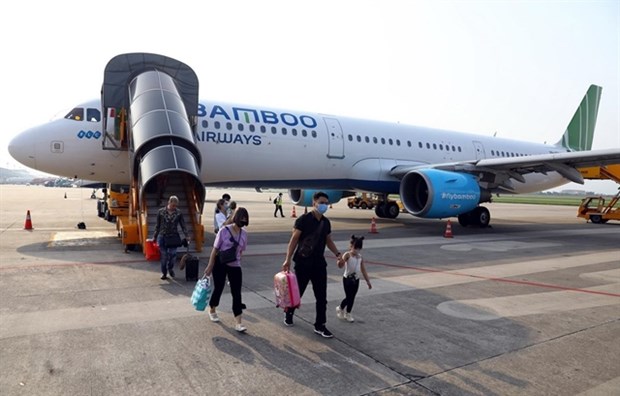 Hanoi (VNS/VNA) – In a document sent to the Ministry of Transport , the private airline Bamboo Airways proposed a preferential loan and some tax cuts to overcome the COVID-19 crisis .

The air carrier asked the ministry to consider and propose to the Government and the State Bank of Vietnam (SBV), the country’s central bank, to issue a resolution to allow commercial banks to provide a long-term refinancing loan of 5 trillion VND (216 million USD) with a 0-percent interest rate, which is similar to the 4 trillion VND loan package applied to Vietnam Airlines.

Bamboo Airways also proposed a rise in the environmental tax reduction on aviation fuel to 50 percent from 30 percent, as well as cut (possibly 100%) in some fees and other service prices like airport services and flight operation services until the end of this year.

Earlier, Bamboo Airways revealed that in 2020, the airline reported a profit of more than 400 billion VND, up 34 percent over 2019, despite the impact of the COVD-19 pandemic.

This is the first time a private airline has asked for a large refinancing loan with an interest rate of 0 percent. The SBV provided refinancing loans for Vietnam Airlines to maintain its operations and overcome the pandemic./.

According to VABA, Vietnamese air carriers in 2020 reported over VND18 trillion (US$776 million) in losses from air transport operations, while their total revenue shed VND100 trillion ($4.3 billion) compared to 2019.

As COVID-19-induced restrictions on international flights remain in force in Vietnam, airlines are only allowed to operate limited cross-border trips to repatriate citizens, transport experts, and ship cargo.

Domestic travel also took a huge hit, with revenue during the peak season of the Lunar New Year holiday this year, which transpired in early February, dropping 70-80 percent compared to the same period in 2019.

In order to stay afloat during the current COVID-19 crisis, Vietjet and Bamboo are renegotiating debt payment as well as rescheduling and selling assets, which in turn helped them report profits of VND70 billion ($3 million) and VND400 billion ($17.4 million), respectively, in 2020.

However, those measures might not be enough as the downward trajectory for domestic airlines is expected to continue in 2021, given that the air passenger sector is projected to suffer a VND15 trillion ($647 million) loss this year.

In light of the gloomy prospects, Bui Doan Ne, deputy chairman and general secretary of the VABA, suggested that a relief package, which grants flag carrier Vietnam Airlines a bailout fund of VND4 trillion ($173 million), to be extended for Vietjet and Bamboo.

More specifically, Vietjet petitioned for a loan of VND4-5 trillion ($173-215 million), which is to be disbursed until 2023 with an interest rate of four percent.

The VABA also proposed that the environmental tax on jet fuel be reduced to VND900-1,000 ($0.04-0.043) per liter, and multiple tax deadlines for airlines be extended.

Vietnamese budget airline Bamboo Airways has been granted takeoff and landing slots to operate six flights per week to Heathrow Airport in the UK as of May in order to better keep up with the travel needs of international passengers, according to a representative from the carrier.

The representative noted that the slots have been allocated in March, therefore allowing Bamboo Airways some time to prepare to launch direct flights to London starting from May. The future schedule is dependent on the market conditions and permission from the Government.

Flights are expected to land at 15:30 p.m. and depart at 17:40 p.m. at Terminal 2 of Heathrow Airport. Bamboo Airways is set to run the direct flights by using a modern wide-body Boeing 787-9 Dreamliner.

By setting up frequent routes to the busiest airport in the world, Bamboo Airways hopes that its international flight network will be further linked to other popular destinations in Europe, thereby helping the carrier to better meet travel demand of international passengers.

This will ultimately serve to boost the Vietnamese tourism brand among the European market whilst promoting bilateral trade between the two countries, according to the airline’s representative.

Bamboo Airways had planned to fly direct to London of the UK and Frankfurt of Germany in the first quarter of 2021, but later delayed its schedule due to the COVID-19 pandemic. However, it had piloted a direct flight transporting stranded citizens from Hanoi to London, using Boeing 787-9 Dreamliner.

Trinh Van Quyet, chairman of Bamboo Airways, recently expresses his wish that the Government would reopen international commercial routes between the end of the second quarter and the beginning of the third quarter of this year in a cautious manner once the COVID-19 pandemic is brought under control throughout the country.

He antiicpated that the global vaccination factor will serve to create a “boom” among the aviation industry during the end of the year, with Bamboo Airways planning to expand its fleet from 29 to 40 aircraft this year.

The local airline has made thorough preparations in order to resume international flights in the near future. Indeed, Bamboo Airways has been granted a Foreign Air Carrier Permit from the US Department of Transportation (USDOT), therefore allowing it to run direct flights between Vietnam and the United States from the fourth quarter of this year.