The Asian Football Confederation (AFC) has announced that the final round of the 2022 AFC Women’s Asian Cup will take place in India from January 20 to February 6, 2022. It will serve as the final stage in Asian qualification for the 2023 FIFA World Cup which will be held in Australia and New Zealand, with both sides automatically qualifying as hosts.

Most notably, strong rivals in the form of the DPRK have been disqualified from the tournament after forfeiting qualifiers for the Tokyo Olympics without reason, thereby offering the Vietnamese women’s national team a greater chance of making it to the 2023 World Cup.

Three Asian football powerhouses, including Japan, the Republic of Korea, and China, will take the continent’s first three slots.

The two remaining places will be filled by either Vietnam, Thailand, Myanmar, Uzbekistan, the Philippines, or Jordan.

The target of the Vietnamese women’s football team led by head coach Mai Duc Chung is to defend their championship title at the ASEAN Football Federation (AFF) Cup, the Southeast Asian (SEA) Games, and win a ticket to compete in the FIFA World Cup.

The Vietnam Football Federation (VFF) announced on Thursday the dates and venues of the games that the national men’s football team will play in the 2022 FIFA World Cup qualifiers in the United Arab Emirates.

As per the Asian Football Confederation’s confirmation in March, the UAE have been selected as the host for Group G, which consists of Southeast Asian challengers Vietnam, Malaysia, Thailand.

The VFF further informed the press of Vietnam team’s schedule in the qualifiers on Thursday.

All of these three matches will take place at 11:45 pm (Vietnam time).

Next Media, a Vietnamese digital content provider, exclusively owns the broadcasting rights of the matches on all platforms.

The Asian qualifiers for the 2022 FIFA World Cup in Qatar are in its second round, played by 40 teams drawn into eight groups of five to play home and away round-robin matches from September 5, 2019.

The remaining games in the qualifiers, which also serve as the road to the 2023 Asian Cup in China, have been pushed back twice due to the ongoing COVID-19 pandemic.

Currently, Vietnam are leading Group G with 11 points from five matches, followed by Malaysia with nine, Thailand with eight, the UAE — who are one game behind — with six points.

Indonesia are in the bottom of the group with zero points after five matches and stand no chance of advancing to the next qualifying round.

Vietnam aim to maintain the first place and reach the third qualifying round for the first time in the country’s football history.

In preparation for the upcoming three important games, the national team members will gather for a call-up on May 10.

From then to May 18, the squad will undergo training in Quy Nhon City, located in south-central Binh Dinh Province.

A friendly game with Topenland Binh Dinh FC on May 17 is also in the schedule for the team.

They will continue training in Hanoi from May 19 to 26 before leaving for the UAE on May 27.

The VFF is coordinating to set up a friendly match between Vietnam and an undecided team in West Asia before the Golden Dragons officially enter the qualifiers. 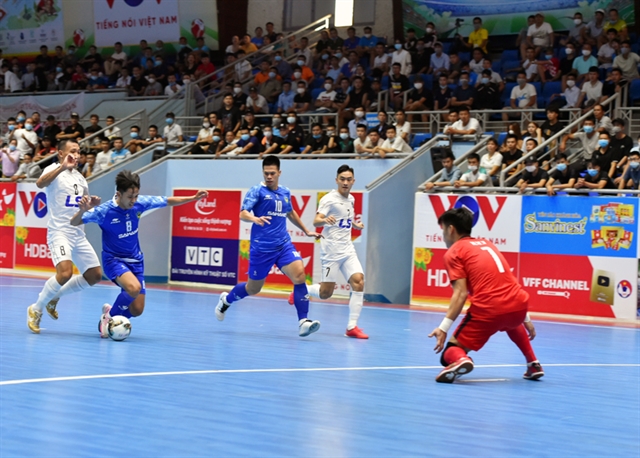 The Asian Futsal Championship which is a qualifier of the World Cup was cancelled due to the COVID-19 pandemic. As a result, organisers decided Japan, Iran and Uzbekistan got automatic places in the final based on results in recent tournaments. Four teams will compete for two remaining berths.

Iraq will face Thailand, while Việt Nam will play Lebanon, with the respective winners of the two-legged games to advance to the September 12-October 3 tournament in Lithuania.

The first legs will take place on May 20, with the return matches pencilled in for five days later. The venue would be a neutral stadium in Qatar or the UAE.

Iraq will appear in the FIFA Futsal World Cup for the first time if they are successful in their clashes against 2012 hosts Thailand, while a maiden appearance also awaits Lebanon should they overcome Việt Nam.

“I am glad to know Lebanon will be our opponent in the playoffs. But I also know that the team have made great progress recently. They even beat Thailand at the Asian championship in 2018,” said Giang.

“I think it is a chance is for both sides. If we could manage our opportunities the door will be wide open for us,” he said but added that he is worried that his team have not played international games for more than a year due to the pandemic.

Việt Nam currently rank 44th in the world, four places below Lebanon. They have not yet met each other in any competition.

Sharing the same opinion with his coach, skipper Trần Văn Vũ said: “It is 50-50 for both teams. The winner will be who has more determination and makes fewer mistakes. We consider the World Cup qualifier is the most important competition of the year, and we can’t wait to play.”

Vietnamese players are currently competing at the National Futsal Championship. They will meet after the first period of the event on May 3.

Giang and his team will have two weeks training in HCM City before departing for Qatar/UAE.

He added: “I have found several new elements for my team. They are playing outstandingly well at the national championship. I hope they could contribute to the nation in the playoffs.” — VNS

In the first match on June 7, Vietnam will face Indonesia at Al Maktoum Stadium, Dubai, United Arab Emirates (UAE). Later, on June 11, also at Al Maktoum, the Golden Dragons will take on Malaysia. Vietnam’s last game, with UAE, on June 15 will be hosted at Zabeel Stadium, Dubai.

The organizer of the matches chose to host the games at night in order to avoid the scorching weather in UAE, which could hit 40 degrees Celsius during daytime.

On May 31, the team will play a friendly with Jordan in UAE to test the squad.

Vietnam are topping group G of the World Cup Asian qualifiers with 11 points after five games. The Golden Dragons will enter the final round of qualifiers for the first time in history if they score at least six points from three games.

The players selected in the team have all put in a number of strong performance in local competitions in recent times.

Despite this, key player Doan Van Hau misses out due to injury.

Furthermore, Huu Tuan of Hoang Anh Gia Lai FC also misses despite putting in a number of eye-catching performance in the V.League 1, helping his team lead the table after 12 games played.

The national team are scheduled to gather in Quy Nhon city of Binh Dinh province on May 10 before taking on local side Binh Dinh FC in a friendly on May 17.

One day later the team will travel to Hanoi to undergo a short training camp, before Hang-seo decides to choose a final list of 25 footballers who will compete in the World Cup qualifiers.

The Vietnamese team will then fly to the United Arab Emirates (UAE) on May 26 where they will play a friendly match against Jordan on May 31.

Moving forward, Vietnam are scheduled to take on Indonesia on June 7, Malaysia on June 11, before facing hosts the UAE on June 15 as part of the remaining fixtures in Group G of the Asian region’s World Cup qualifiers.

Due to no international games being played due to disruption caused by the ongoing fight against the novel coronavirus (COVID-19), the Vietnamese team remain on 1,657 points, making them the sixth strongest side in Asia and 33rd in the world.

Most notably, the Vietnamese footballers have maintained their leading place in Southeast Asia, followed by Thailand who are ranked as the seventh strongest team in Asia and are in 39th place worldwide.

At the top of the rankings, the United States lead the way with 2,192 points and hold on to the top position, followed by Germany, the Netherlands, France, Sweden, and England.

Moving forward, the Vietnamese team plan to meet in late May and early June following the conclusion of the 2021 National Women’s Football Championship.

Looking ahead to the rest of the year, the women’s football team are scheduled to compete in the ASEAN Football Federation (AFF) Women’s Championship, in addition to the upcoming 31st Southeast Asian (SEA) Games.

Most notably, the women’s national squad are set to participate in qualification matches for the 2022 Asian Football Confederation (AFC) Women’s Asian Cup. The tournament will also serve as the first round of matches in the Asian qualifiers for the 2023 FIFA Women’s World Cup.

Despite these plans, the impact of the COVID-19 pandemic may cause the national team’s schedule to be adjusted, with coach Mai Duc Chung doing his utmost to prepare the side for future international tournaments.