This year, within ASOEN cooperation, Vietnam will promote cooperation and sharing of information, data and experience, and perform well its role as the host country of the 11th AWGCC Meeting, the 5th ASEAN Environmentally Sustainable City (ESC) Award, the 4th ceremony to award the potential ESC certificate.

Vietnam has been recognised as a country with high biodiversity in the world. The biodiversity has made a great contribution to ensuring food security and livelihoods for people, maintaining genetic resources of animals and plants; supplying construction materials and fuel and pharmaceutical sources, and forming natural landscapes.

At the 31st Meeting of ASEAN Senior Officials on the Environment (ASOEN 31) and related meetings, the Vietnamese delegation actively contributed comments and proposals to important issues, demonstrating its responsibility for the region, and strengthening multilateral relations as well as ties with each country within ASEAN and ASEAN 3. 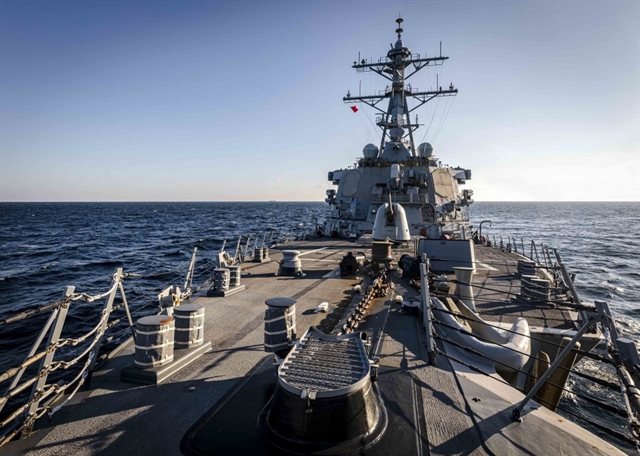 HÀ NỘI — Việt Nam is a responsible member of the international community and always upholds provisions under the United Nations Convention on the Law of the Seas (UNCLOS 1982), spokesperson for the foreign ministry Lê Thị Thu Hằng said.

She made the statement on Thursday in the regular press briefing, held virtually this time due to COVID-19 in Hà Nội, when asked for Việt Nam’s reaction to the US Navy’s first freedom of navigation operation (FONOP) held under the Biden administration in February.

The guided-missile destroyer USS John S. McCain reportedly conducted the FONOP near the Trường Sa (Spratly) and Hoàng Sa (Paracel) archipelagoes in the South China Sea (known as the East Sea by Việt Nam) over which Việt Nam has repeatedly claimed sovereignty, but contested by mainland China and China’s Taiwan.

“By engaging in innocent passage without giving prior notification to or asking permission from any of the claimants,” the US Navy noted in a statement.

Also regarding the recent statement by French Minister of Armed Forces Florence Parly that France had sent the nuclear submarine, SNA Emeraude, to patrol the South China Sea, together with the naval support ship BSAM Seine, the said spokesperson said: “As a responsible member of the international community and a signatory of the UNCLOS 1982, Việt Nam always upholds the provisions of the UNCLOS, including items related to maritime and flight activities over the sea regions set up in accordance with UNCLOS 1982.”

“The maintenance of peace, stability, security and order, safety, maritime and overflight freedom, the rule of law, with respect to sovereignty, sovereign rights and jurisdiction of the littoral countries in the South China Sea, in a manner that is consistent with the UNCLOS 1982, is the shared goal, interests, responsibility, and aspiration of all countries and of the international community,” Hằng said.

Việt Nam hopes that all countries would strive for “positive contribution” to the maintenance of peace and stability on the basis of international law in the South China Sea region, the Vietnamese diplomat stressed. — VNS 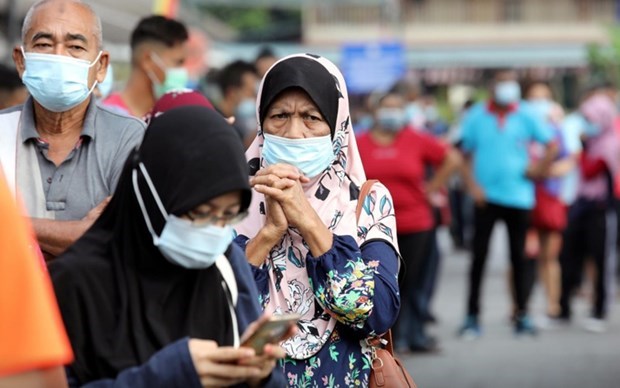 People wait for their turn for COVID-19 testing in Malaysia (Photo: Reuters)

Kuala Lumpur (VNA) – The Malaysian parliament may convene during the emergency period as approved by the country’s King, according to a palace statement on February 24.

Comptroller of the Royal Household Ahmad Fadil Shamsuddin said the matter was decided following Sultan Abdullah’s meeting with the speakers of the upper and lower house on the same day.

The parliament will resume on a date deemed suitable by the King, taking into consideration the advice of Prime Minister Muhyiddin Yassin, the statement said.

The consent of the Malaysian King to the advice of the PM on the declaration of the Emergency Proclamation on January 12 is a proactive measure to contain the COVID-19.

The state of emergency is due to run until August 1. Malaysia has the third highest COVID-19 tally in Southeast Asia, following Indonesia and the Philippines, posting over 290,000 cases and 1,088 fatalities./. 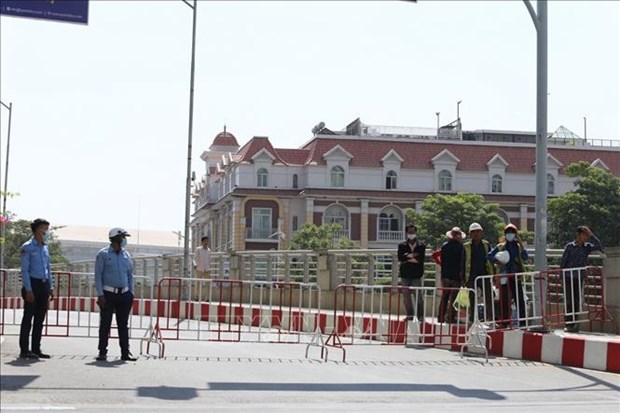 People in Cambodia are asked not to enter and leave COVID-19-hit areas (Photo: VNA)

Phnom Penh (VNA) – Cambodia logged 65 new COVID-19 infections on February 25 morning, including 58 cases in the community with links to the “February 20 community infection outbreak”, announced the Ministry of Health.

Of the locally-transmitted cases, there were 41 Chinese nationals, nine Vietnamese, five Cambodian and three from the Republic of Korea, Singapore and Japan.

All social activities can remain as usual, but preventive measures must be reinforced, he added./. 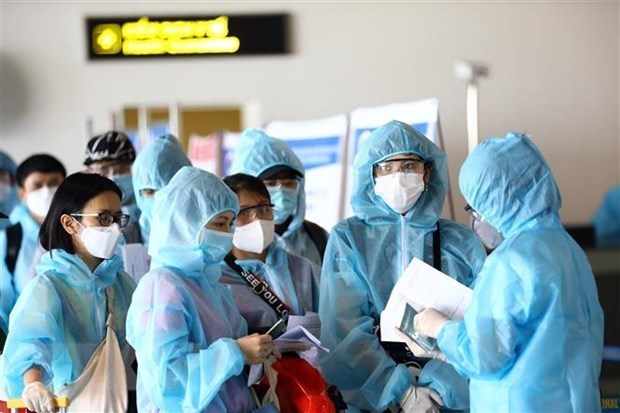 Hanoi (VNA) – The Vietnamese Ministry of Foreign Affairs is working with relevant ministries, sectors, localities and offices to make plans to repatriate Vietnamese citizens in a safe manner based on the developments of the COVID-19 pandemic in the world and the country, especially the domestic quarantine capacity, according to Foreign Ministry spokesperson Le Thi Thu Hang .

She made the statement on February 25 when responding to reporters’ queries on Vietnam’s plan to reopen repatriation flights , after the Vietnamese Government suspended flights bringing Vietnamese people back home in late January, given the appearance of new variants of the coronavirus SARS-CoV-2, new outbreaks in many countries, and complicated developments of the pandemic in Vietnam.

She informed that recently, Prime Minister Nguyen Xuan Phuc has directed relevant offices to discuss with partners in countries with high safety factor about the resumption of commercial flights.

Several partners have expressed their wish to resume commercial flights with Vietnam, and Vietnam’s aviation agencies are considering and discussing specific procedures and dates, she added./.

The Hanoitimes – Vietnam has been on way to pursue an energy transition that reduce carbon emission and develop renewable sources in an effort to combat climate change .

Liquefied natural gas (LNG) has been considered a source of energy that is able to meet Vietnam’s rising power demand and clean enough in comparison with coal power which the country is advised to minimize from now on.

Vietnam has been on way to pursue an energy transition that reduces carbon emission and develops renewable sources in an effort to combat climate change and there will be room in the country’s mix for fossil fuels as long as they are clean, a local expert has said.

Gas, particularly LNG, is the only meaningful solution for Vietnam to reduce emissions in the context that the potential of hydropower is almost exhausted while solar and wind power are not reliable enough, the Bangkok Post quoted Dong as saying.

“Only gas could provide Vietnam with a practical energy supply, in particular LNG,” according to Dong, who is a former deputy minister of Planning and Investment.

He attributed the choice of gas to falling fuel prices, improved efficiency and technologies. At the same time, the price of coal-fired power is rising due to supply and financial limitations.

For the aforementioned reasons, Dong believes Vietnam needs to move away from coal to other sources, as China and many other countries are doing.

“In the interests of environmental protection and sustainable development, more and more provinces in Vietnam are demanding a change from coal projects to LNG power projects,” he said.

Currently, coal-fired power plants generate about 39% of the electricity consumed in Vietnam. Hydropower accounts for 35%, gas-fired power 18.5%, and renewables 7.2%.

Over the past decade, hydropower generating capacity has recorded the highest growth rate in Vietnam. The country now has 5,500 megawatts (MW) solar capacity, representing 40% of all such capacity in Southeast Asia. This suggests a boom in renewable energy projects in Vietnam, where more attractive feed-in tariff (FIT) policies have been introduced for solar and wind power.

However, as the second largest power market in ASEAN, the country of 95 million is facing a critical supply challenge, with a need to triple capacity by 2030, the expert said.

“Rapid urbanization and industrialization have driven up electricity consumption in Vietnam dramatically,” he said, adding that southern Vietnam was at risk of being undersupplied.

In addition to expanding capacity, Vietnam has encouraged energy efficiency and renewable energy, reduction of CO2 emissions and creation of an energy market through the country’s eighth National Power Development Master Plan for the 2021-2030 period.

Furthermore, the government sees an efficient and reliable power supply as critical for socio-economic development. In 2016, it abandoned plans for nuclear development, citing safety concerns following the 2011 Fukushima disaster in Japan. It has resulted in a shift in long-term planning to include other sources to replace the planned nuclear capacity.

“I think this is somewhat in line with the (goals of) interconnectivity and interconnection within ASEAN,” Dong emphasized.