The donation consists of 100,000 antibacterial cloth masks and 50,000 medical masks, made by Vietnamese enterprises.

The Hanoi city government on June 1 handed over medical supplies to the US city of New York in support of their fight against Covid-19, Kinhtedothi.vn reported.

The donation consists of 100,000 antibacterial cloth masks and 50,000 medical masks, made by Vietnamese enterprises. They meet quality standards prescribed by Vietnam’s Ministry of Health and are certified with CE marking of the European Union.

Hanoi mayor Nguyen Duc Chung said that during the pandemic, international cooperation and solidarity is needed to curb the Covid-19 spread and minimize its impacts on every country in the world.

“We believe that with the drastic measures the US government is taking, with the efforts and determination of its people and international cooperation, the US will soon get over the pandemic,” Chung said at the handover ceremony.

For his part, US Ambassador to Vietnam Daniel Kritenbrink expressed his special thanks to the Hanoi mayor for this gift.

The ambassador praised the Vietnamese government and Hanoi’s authorities for promptly applying necessary measures to curb the pandemic spread.

The US is proud to be Vietnam’s partner in dealing with the Covid-19 pandemic, Daniel Kritenbrink stressed.

He added that the international and the US press has also recognized that Vietnam is currently among the leading countries in containing the Covid-19 pandemic.

As the United States is tackling Covid-19 outbreak and New York is one of the worst affected cities, Ambassador Kritenbrink believes that Hanoi’s gift will help keep the city’s medical staff be safe and soon control the disease.

This year marks 25 years of diplomatic relations between the two countries, thus, the ambassador stated that events like this help strengthen the partnership between Vietnam and the US in many aspects.

In mid-April, the Vietnamese government gifted 200,000 cloth masks to the US government and people. In addition, Prime Minister Nguyen Xuan Phuc made another donation of 50,000 medical masks for the White House Office.

In response, Ambassador Kritenbrink said the gift was a tremendous show of solidarity and support from Vietnam for his country, and pledged that the US would enhance collaboration with the Vietnamese side in dealing with the pandemic and in ensuring public health and safety.

Colliers International, another consultancy, said in the eastern part prices have risen 7-9 percent year-on-year since the establishment of Thu Duc City last January.

CBRE forecast a further rise of 1-4 percent in prices in the city’s primary market this year.

The luxury segment is expected to go up by 2-7 percent owing to the emergence of branded residences and luxury apartments – those costing above $4,000 per square meter — associated with international management brands in District 1.

A survey by VnExpress found the average price in the secondary market in the last three quarters remaining at the purchase price and even 2-3 percent lower if sellers are in need of money.

Tran Khanh Quang, CEO of Viet An Hoa Real Estate Investment JSC, a developer, said the prices in the primary market seem to depend on the pricing strategies of sellers.

Vinh Hoi apartment building in District 4 is classified at level D, the dangerous level. The outer walls of the 4-story high building are covered with thick moss. More dangerous, over time, the ceilings of the apartments have been damaged, revealing concrete and steel. 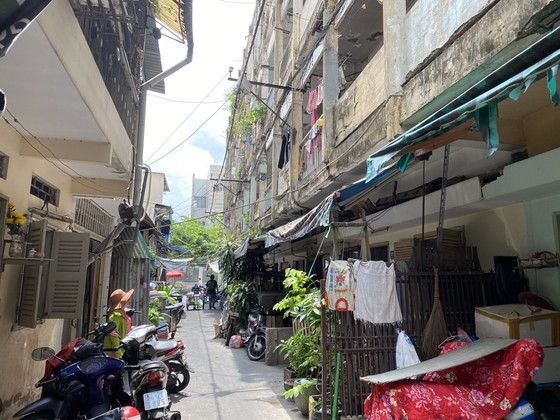 According to the owner of apartment A18, from the end of 2018 till the middle of 2019, the district administration has called for investors to participate in the construction project and planned for resettlement; however, the coronavirus pandemic 19 stopped the plan.

Truc Giang apartment building, which is ranked level D, suffers the same fate. The apartment building is empty because residents have moved to new places; yet, three families still refused to move to other places because they said their new residence is too far from the workplace.
The city is now home to 474 apartment buildings, which were built before 1975 and only 10 of them have been rebuilt. The others, such as Nguyen Thien Thuat in District 3, Vien Dong in District 5, Ngo Gia Tu and An Quang in District 10, and Thanh Da in Binh Thanh District, have seriously deteriorated, threatening the safety of residents and damaging the city’s landscapes.
According to the People’s Committee in District 4, three apartment buildings in the district ranked level D were built before 1975. Most of the residents in apartment Nguyen Tat Thanh agreed to move to new residences; however, the local administrators have not failed to choose investors. Three families in Truc Giang refused to relocate in Phu Tho apartment in District 11. Governments have repaired Tan My apartment in District 7 as a temporary residency for residents in Vinh Hoi apartment which is being under construction.
The renovation of the old apartment building has bumped into barriers although it is prescribed by law. For instance, the five-story Truc Giang Apartment has a land area of 843 square meters with 123 apartments each from 10-30 square meters. District 4 People’s Committee has repeatedly invited investors to participate in renovation and reconstruction projects, but because of the small land area, investors will not make a profit.
According to the Department of Construction, there exist many inadequate regulations on renovating and building old apartment buildings. For example, the current regulations on compensation, assistance, temporary resettlement and resettlement are no longer appropriate.
Moreover, there has been no consensus on the exemption or reduction of land use fees and financial obligations arising from the adjustment of increasing planning and architectural indicators.
The People’s Committee of Ho Chi Minh City has authorized people’s committees in districts to renovate the old apartment building, but during the process, district administrations have encountered many problems related to the current legal system; therefore, they had no choice but report to the People’s Committee for further guidelines.
In addition, in early 2021, the People’s Committee of Ho Chi Minh City has submitted amendments and supplements to the Decree 101/2015 on renovating and rebuilding old condominiums to the Ministry of Construction but the city is still waiting for approval.

Several individuals have been arrested in association with a fire that broke out during the illegal renovation of an apartment building in Ho Chi Minh City last weekend, killing one person and injuring five others.

Police in the city’s District 1 have apprehended several people to facilitate their investigation into the deadly blaze that occurred at an old apartment building on Tran Hung Dao Street on Saturday, a source close to Tuoi Tre (Youth) newspaper confirmed on Monday.

Preliminary information showed that multiple spaces inside the apartment building were leased by many people to operate coffee shops and bars.

In early April, the new owner hired a group of workers to renovate these spaces.

As the renovation plan had not been approved by local authorities, it was suspended on April 13.

However, the workers secretly continued their tasks on May 1 before the fire broke out.

Nine fire trucks and 56 firefighting police officers were sent to the location to put out the blaze.

One person was killed and five others were injured following the incident.

Among the injured, one man suffered a broken leg after jumping from the first floor of the building.

The apartment building, about 30 years old, has three floors and consists of 12 apartments.

Four of the apartments were burned down in the blaze.

The 100 in the list have made contributions to solving urgent global issues such as climate change and the Covid-19 pandemic or have made breakthroughs in their own fields.

Le Thi Quynh Mai of the National Institute of Hygiene and Epidemiology Vietnam in Hanoi leads a team of women researchers who were awarded the 2019 Vietnamese Kovalevskaia Award for their successful isolation of a new strain of the novel coronavirus.

Tran Thi Thu Ha from Thai Nguyen University in the northern province of the same name also won the 2019 Vietnamese Kovalevskaia Award for her research into the breeding and intensive cultivation of trees, the propagation and rearing of non-timber forest products and medicinal herbs and the development of medicinal plants.

Vuong Thi Ngoc Lan from the Ho Chi Minh City University of Medicine and Pharmacy was one of three recipients of the 2020 Ta Quang Buu Awards, an annual prize given by the Ministry of Science and Technology to encourage and honor scientists with outstanding achievements in basic research in the fields of natural sciences and engineering, for her research comparing the transfer of fresh and frozen embryos for in vitro fertilization.

Pham Tien Son of Da Lat University was also a recipient of the 2020 Ta Quang Buu Awards for his studies into generic properties for semi-algebraic programs.

Every year since 2016 the Asian Scientist Magazine has been compiling a list of the continent’s most outstanding researchers to celebrate the success of the region’s best and brightest, highlighting their achievements across a range of scientific disciplines.

To make the list, scientists must have received a national or international prize in the preceding year for their research, made a significant scientific discovery or provided leadership in academia or industry.

Asian Scientist is published by a team of professional science and medical journalists with contributions from industry and academia.

The Vietnam National Hospital for Tropical Diseases has stopped receiving new in-patients since May 5 to conduct Covid-19 tests for all staff members after a doctor tested positive for Covid-19. The hospital will speed up the vaccination process for all of the staff and issue notice to patients who have been at the hospital for the past 15 days.

On May 4, a doctor at the hospital tested positive for Covid-19. He had travelled to many districts including Dong Anh, Ba Dinh, Dong Da, Tay Ho and Hoang Mai. Hanoi authorities have extended testing for suspected people in these districts.

“He lives on Kim Ma Street, Ba Dinh District and went to a karaoke bar on Lang Street, Dong Da District on April 28. Localities authorities must be on alert and start the contact tracing process,” said Tran Thi Ha, director of Hanoi Department of Health.

The house of the doctor was disinfected and the residential area with 26 households and 72 people is on lockdown. The authorities have traced 11 people who were in contact with the doctor.

The authorities also put Apartment Building B6 on Giang Vo Street on lockdown after the doctor visited his uncle there.

Deputy Minister of Health Do Xuan Tuyen announced that 400 samples had been taken from 800 staff, patients and family members at the hospital so far. The initial results showed that 14 people had tested positive for Covid-19 including two doctors, eight patients and four family members. Even though they are still considered suspected cases, the National Hospital for Tropical Diseases was asked to tighten monitoring and consider the rest of the people staying at the hospital as F1 patients.