Guided by Politburo’s Resolution No.55/2020-NQ/TW, the recent draft decision of the Prime Minister to approve the draft Power Development Plan VIII (PDP8) specifies 45 major liquefied natural gas (LNG) projects with total capacity of just over 53,000MW, lining up in the list of power ventures which are of national importance and a development priority from now until 2045.

The LNG infrastructure is strongly promoted under PDP8, setting a steady foundation for the growth of such projects and its related businesses in Vietnam.

Under Vietnamese laws, a LNG project can be developed in either a public-private partnership (PPP) initiative whereby the investors will cooperate with the state to develop and operate it through signing and performing the PPP contracts; or an independent power producer (IPP) project whereby investors will wholly develop it by themselves.

For an LNG project to be considered under the PPP form of investment, the total capital must be not less than VND1.5 trillion (approx. $65 million). However, the capital requirements for certain ventures in practice, particularly involving foreign inventors, can be substantially higher, normally around $2.5-3 billion in the past, and now perhaps $5 billion or higher for large-scale LNG projects.

Investors of a PPP scheme shall have to sign a PPP contract with the state agency in order to implement the project. Types of PPP project contracts under the Law on PPP are as follows (see red image):

The model contracts for each type of PPP project shall be further specified by the government.

Generally, basic steps for implementation of a LNG venture in PPP form shall be as follows (see pink image):

The time period for the investor to be officially selected as the developer of the PPP project will be substantially long due to the heavy involvement of the government and the sophisticated requirements under the bidding procedures. In return, the investor will be entitled to better governmental support and guarantee (e.g., guarantee on foreign currency convertibility) which are required to raise project finance from foreign lenders.

The funding and development of an IPP LNG project shall mainly be governed by the Law on Investment and its implementing regulations as well as Circular No.57/2020/TT-BCT.

– There are four general policies – on power purchaser, electricity generation price, a power purchase agreement (PPA), and construction of transmission lines and substations.

If EVN or its subsidiaries is a contracting party to the PPA, based on the model PPA provided under Circular 57, the investor of the LNG project as the Power Seller, and EVN or its subsidiaries as the power purchaser, can negotiate, agree, and supplement certain terms which are suitable for the actual conditions of the specific venture if necessary. This regulation may suggest that parties can have more flexibility in negotiating upon the technical clauses under the PPA.

Under Circular 57, such projects are not entitled to enjoy the feed-in tariff mechanism. Rather, it provides the basic principle to determine the electricity generation price for LNG initiatives.

This generation price is the aggregate of the power purchase agreement price and the specific connection price, which shall be agreed upon by the parties and determined by the method as specified under Circular 57.

The specific connection price is a new component introduced under Circular 57, which is for the LNG project to recover from the grid connection costs incurred by or allocated to the investor to build the transmission lines and the power substation(s) from the distribution yard of the power plant to the main grid connection point as agreed with the power purchaser; or assigned by the competent state authority.

Under Circular 57, the competent state authority can assign the power seller to establish a separate project to build the transmission lines and the power substation to load electricity from their power plant to the main grid connection point. However, we have to wait for further guiding implementations to see how this mechanism will be implemented in practice.

However, the circular regards the construction of transmission lines and power substation as the power seller’s obligations, which may cause additional liabilities to the investor. Thus, they should seek consultation with the power purchaser and local authorities upon this obligation, especially taking into account its financial/technical capacity.

The investor can fund an IPP LNG project through two options: registering for investment of a greenfield LNG scheme and setting up an economic organisation as the project company to implement it in Vietnam; or brownfield – putting money into an existing project by way of acquiring existing shares or subscribing for new shares in the relevant Project Company.

If following option 1, there are four key steps. First, the selection procedure is applied in the circumstances and methods as stipulated under the Law on Investment, which will take a substantial amount of time due to the complex bidding/auction procedures.

Second is in-principle approval. Depending on the nature and scale of the project, it can be subjected to the approval authority of either, the National Assembly of Vietnam, the Prime Minister, or the provincial People’s Committee.

After that step, the competent provincial Department of Planning and Investment (DPI) will issue the investment registration certificate to formalise the registration of the LNG project.

The next step is the enterprise registration certificate for the project company. The investor must set up a project company in Vietnam to start implementing the LNG scheme.

If a foreign investor and following option 2, they must register for the approval of the acquisition or subscription of the existing shares/new shares in the Target Company with the competent DPI, which is required in the following three cases:

First, if the acquisition or subscription increases the ownership ratio of the foreign investor(s) in the Target Company which conducts business in areas with certain market access conditions applicable to foreign investors.

Third, if the foreign investor acquires or subscribes to shares of the Target Company which has a land use right certificate for land on an island or in a border commune; in a coastal commune; or in another area that affects national defense and security.

The first major barrier currently is a lack of an exhaustive legal framework and implementing regulations. Given that the Vietnamese LNG market and its legal framework are still at an early stage of development, the investment and implementation of such projects and especially LNG-related businesses are expected to face uncertainties and ambiguities. For now, Decree No. 87/2018/ND-CP is acting as the key piece of legislation governing the trading, importing and transporting of LNG. However, the conditions therein are quite general and ambiguous, which may cause confusion for investors.

Second is the lengthy regulatory approval process for the full project chain. The LNG market is relatively new in the country and Vietnam still lacks supporting infrastructure. Thus, investors participating in the sector may need to fund all aspects of the LNG venture chain and to ensure smooth operation of their projects, which shall involve complex and lengthy regulatory approval processes associated with each component of the LNG-to-power chain.

The third issue involves foreign currency availability. Like other countries, Vietnam’s foreign exchange reserves are limited and there exists a risk that the availability of US dollars in the country may be rationed at times, which poses a challenge for any investors who want to convert VND into USD to conduct their business.

Finally, the Law on Land allows investors to mortgage both their land use rights as well as assets attached to land (understood as immovable assets) as collateral(s) to raise financing from local banks in Vietnam. However, the land use rights can only be mortgaged where the land rent due to the state authorities has been paid in a one-off payment. This means that, if the project land is exempted from the land rent (as an investment incentive) or the land rent is paid on an annual basis, the land cannot be used as a security for raising finance to support the LNG project. 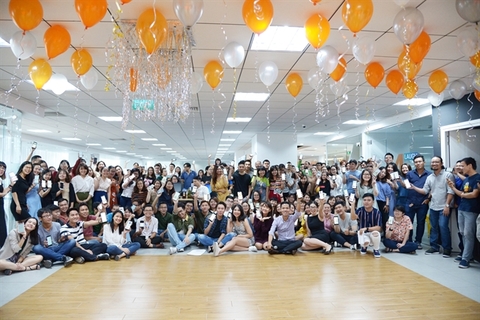 Pops Worldwide has achieved a record in number of viewers to cement its status as Southeast Asia’s fast-growing digital entertainment company.

With over 52 billion views a year, it is the market leader among millennials, GenZ and children in Viet Nam and Thailand, and has strong momentum in Indonesia.

Since its inception in 2007, the company has established a strong foothold in its key markets of Viet Nam, Thailand and Indonesia.

Its sheer scale and multi-channel approach, including engaging third-party platforms such as YouTube, Facebook, Apple Music, Spotify, Google Play Music and Amazon Music, has been a driving force in connecting brands and content creators with users in a region with diverse cultures and demographics.

The company has worked with prominent global brands such as Warner Media, NBCUniversal, Discovery, TV Asahi, The Pokemon Company, and Toei Animation.

Esther Nguyen, its CEO and founder, said: “the company was born out of my initial vision to build a Spotify for Viet Nam. Now it has grown bigger than what Spotify signifies; it is now Southeast Asia’s top choice for all things digital including music, entertainment, edutainment, comics and animes.

“In the near future we hope to continue to push for growth by expanding across Southeast Asia including the Philippines, one of Southeast Asia’s fastest-growing digital economies

“As a digital-first entertainment company, the company is always on the lookout for ways to innovate and reinvent ourselves since the digital world is ever-changing.

“Riding on our successful momentum in Viet Nam, Thailand and Indonesia, we hope to continue to provide scalability to global brands and creators, giving them unparalleled access to a diverse audience and a fast-growing digital eco-system in Southeast Asia.”

Pops Worldwide has raised US$37 million in funding to date, including a US$30 million series C round in 2019 led by Eastbridge Partners and Mirae Asset-Naver Asia Growth Fund. — VNS