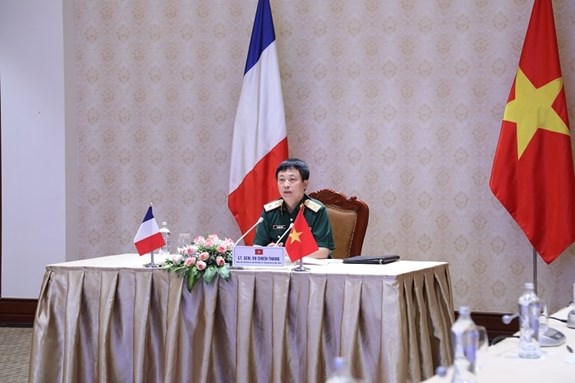 Lt. Gen. Vu Chien Thang, Director of the Ministry of National Defence ‘s Department for External Relations, speaks at the virtual meeting on May 5 (Photo: qdnd.vn)

Hanoi (VNA) – The working group for Vietnam-France defence cooperation held a meeting via videoconference on May 5 during which the two countries’ officials agreed to maintain high-level contact and strengthen links in different aspects.

The event was chaired by Lt. Gen. Vu Chien Thang, Director of the Department for External Relations under the Vietnamese Ministry of National Defence, and Brigadier General Eric Peltier, head of the south bilateral cooperation department of the French army .

Reviewing the cooperation outcomes in the recent past, the two sides noted that Vietnam and France have maintained their cooperative ties in many areas in an appropriate manner.

Despite complex developments of the COVID-19 pandemic, they have sustained high-level contact via videoconference while working closely and rather effectively in other spheres like training, UN peacekeeping operations, and military medicine.

Particularly, he added, France has sent its experienced experts to provide specialised advice for the Vietnam Department of Peacekeeping Operations under a cooperation agreement between Vietnam and the EU.

For the time ahead, the two sides agreed to maintain high-level contact in suitable forms, in person or via teleconference; organise activities to mark the 30th founding anniversary of defence relations; and enhance ties in hydrography, peacekeeping operations, military medicine, and training.

They will also specify the time for the Vietnam-France defence strategy and cooperation dialogue this year and finalise the defence cooperation plan for 2021-2022./.

This contest is aimed at enhancing international military cooperation among countries.

A contest on the International Army Games will be held in Vietnam during 14 weeks from May 6 to August 8, in the form of multiple choice combined with prediction of the number of people with correct answers.

The contest was announced at a press conference jointly held by the People’s Army Newspaper and the Ministry of National Defence’s Department for External Relations in Hanoi on May 4.

According to Deputy Editor-in-Chief of the People’s Army Newspaper Le Ngoc Long, the contest will be held every week, in which participants will answer directly on the questionnaires printed on the People’s Army newspaper.

Deputy Director of the department Pham Manh Thang said this contest is aimed at promoting the Army Games, enhancing international military cooperation among countries and as well as reviewing the achievements of the Vietnam People’s Army in previous events.

“Vietnam has actively worked to become one of the host countries for a number of games”, he said. “At the same time, we are seeking best method to organize activities of the Army Games at Mieu Mon Training Center in Hanoi, while ensuring prevention and control of Covid-19 pandemic.”

A wide range of prizes are offered for both individuals and groups with the value from VND2 million (US$86.5) to VND20 million (US$865.4).

The International Army Games 2021 is scheduled to be held between August 22 and September 4, across 13 nations, including Russia, Armenia, Algeria, Iran, Belarus, India, Kazakhstan, Qatar, China, Mongolia, Serbia, Uzbekistan and Vietnam.

Of the 34 competitions, Vietnam will host the rescue and shooting.

The whirlwinds and hailstorms caused damages to property and crops of people in Tan Long, Tan Thuan, Tan Thanh, Huong Loc, and Tan Lap communes of Huong Hoa district and blew off the roofs of more than 100 houses. A medical checkpoint of the Border Post of Lao Bao International Border Gate also collapsed due to the whirlwinds.

Immediately, the Military Command of Huong Hoa district sent its personnel to the scene to help local people repair damaged houses and clear fallen trees. The unit’s troops also worked with the Border Post of Lao Bao International Border Gate to rebuild the checkpoint to help troops soon stabilize their lives and continue their missions.

At present, the district’s Military Command is cooperating with the local leadership to estimate losses, so as to provide relief for local people.

Steel prices have risen by 40-50 percent since the end of 2020, according to the Vietnam Steel Association (VSA), troubling construction companies.

The Vietnam Association of Construction Contractors asked the Government Office to investigate the price rise and find out if steelmakers were cooperating with each other to push up prices.

The VSA has forecast that prices will continue rising until the end of the third quarter.

The ministry expects demand for steel and steel billet to grow 3-6 percent respectively this year as the real estate industry and construction sectors are reviving and major infrastructure projects like Long Thanh International Airport in southern Dong Nai Province and the North-South Expressway are underway.

The ministry has recommended that the government issues favourable policies encouraging steelmakers to expand production and attracting new enterprises to the steel industry.

“Strokes or cerebral vascular accidents are the most common cause of death in Việt Nam. Each year Việt Nam has about 200,000 stroke cases, of which about 50 per cent are fatal. Although many people fortunately survived after a stroke, they still suffer severe sequelae, even inability to work, creating burdens on families and society. Therefore, it is very important to raise awareness for patients and the community so that everyone can actively participate in stroke prevention and treatment,” said MSA director Lương Ngocc Khuê at the launching ceremony.

The website is directly linked to the MSA’s website, providing people with accurate and useful information and knowledge, especially the latest scientific information and the latest medical advances on stroke prevention and control. It also provides important information from recognising the early signs and symptoms of a stroke, how to manage and prevent a stroke through building a healthy lifestyle and adhering to treatment or a forum to share experience on stroke prevention and control or a Q&A section to help patients get online consultation from professional experts.

In addition to the special website, MSA also launched a Facebook fan page and a YouTube channel to further disseminate useful information about stroke prevention and control to patients and the community. — VNS

Vietnam has set objectives for its foreign relations and proactively integrated into the world economy since 1990s.

On September 2, the Socialist Republic of Vietnam will celebrate its 75th National Day. This article focuses on major milestones reached in diplomacy and defense since 1995, a pivotal year in Vietnam’s development.

In 1995 Vietnam normalized its relations with the United States and became the sixth member of the Association of Southeast Asian Nations (ASEAN).

In the 1990s Vietnam set itself the objective of ‘diversifying and multilateralizing’ its foreign relations and proactively integrating with the world economy. Using these objectives as a benchmark, Vietnam achieved six major diplomatic milestones.

Fifth , Vietnam was elected a non-permanent member of the UN Security Council for the second time for the 2020-21 period. Sixth , Vietnam as ASEAN Chair 2020 responded to COVID-19 by demonstrating decisive leadership in re-orientating ASEAN to combat this threat to public health in Southeast Asia.

The first milestone was reached a decade after the decision was made in 2006 to modernize Vietnam’s navy and air defense-air force. During this period Vietnam acquired Gepard-class frigates, Molniya-class guided missile Fast Attack Craft, six Varshavyanka-class diesel submarines, and Sukhoi Su-27 and Su-30 jet aircraft.

The second milestone was reached in 2008 when Vietnam’s Maritime Police were upgraded to an armed service and renamed Vietnam Coast Guard with responsibility for maritime law enforcement, search and rescue, and sovereignty protection in the East Sea (internationally known as the South China Sea).

The third milestone was reached in 2018 when Vietnam substantially upgraded its commitment to United Nations peacekeeping by deploying army medical staff to a Level II Field Hospital in the South Sudan.