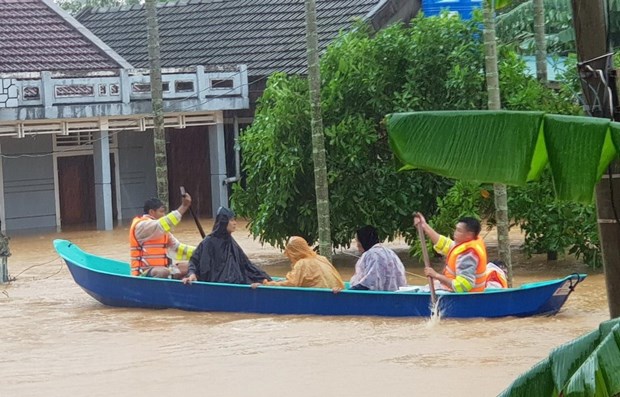 Hanoi (VNA) – As many as 456 households in Nghia Hanh district of the central province of Quang Ngai will benefit from financial support funded by the US Agency for International Development (USAID) for repairing and reinforcing their houses damaged by typhoons and floods last year.

Under a decision issued on March 4 by the provincial People’s Committee, 11.6 billion VND (503,745 USD) will be distributed directly to the households in the two phases.

The funding is part of the 12.3-billion-VND aid package pledged by USAID to support flood-affected people in the district.

The remaining amount will be used to overcome consequences of natural disasters and repair and consolidates houses for local residents./. 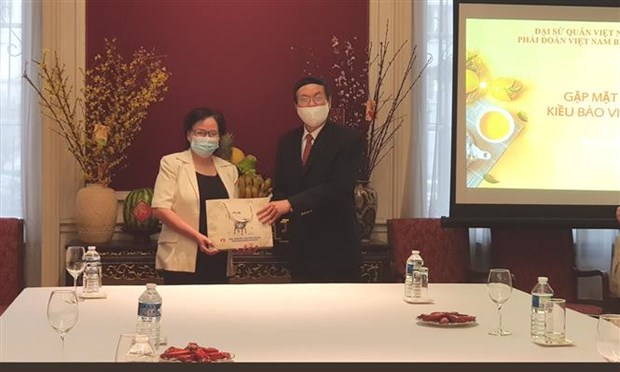 Vietnamese Ambassador to Belgium Vu Anh Quang (R) presents a souvenir to a member of the Vietnamese community in the European country (Photo: VNA)

Brussels (VNA) – The Embassy of Vietnam in Belgium held a get-together with overseas Vietnamese on March 4 to celebrate the Lunar Year of the Buffalo .

At the event, Ambassador to Belgium Vu Anh Quang extended his greetings to the local Vietnamese community, and voiced his encouragement to the community after a year full of hardships caused by COVID-19 , while expressing his gratitude for their activities in support of the homeland.

Quang, who is also head of the Vietnamese mission to the EU, also informed the participants on future activities, along with the results of the fight against COVID-19 in Vietnam, the country’s socio-economic development and success of the 13th National Party Congress which took place before Tet (Lunar New Year) festival.

Despite difficulties, the association of Vietnamese people in Belgium raised 6,000 EUR (7,170 USD) for flood victims in Vietnam’s central region last year, which helped farmers at a cooperative to resume production and stabilise their lives, according to a member of the organisation./.

Vietnam, together with Indonesia and the Caribbean, will benefit from these projects, according to a press release from the US Embassy in Hanoi.

These projects are developed to help the humanitarian community better understand how the private sector can invest in projects that mitigate the risk of disasters, and increase businesses’ participation in community disaster preparedness plans and policies. They will also help reduce the social and economic impact of disasters, and support communities’ efforts to recover and rebuild after disaster strikes.

In Vietnam, the Asia Foundation in partnership with ISET International, the Vietnam Chamber of Commerce and Industry and the Vietnam Institute for Development Strategy, will bring together key private sector, local government, and civil society actors to collaboratively design and launch multi-stakeholder pilot projects to strengthen flood mitigation efforts and improve water network management in the coastal city of Quy Nhon and Binh Dinh Provinces.

USAID responds to an average of 75 disasters in more than 70 countries every year. Through collaboration with the private sector, USAID can harness innovation, creativity, and entrepreneurship to improve the efficiency of humanitarian assistance.

The Hanoitimes – Local police are investigating the incidents shortly after the cases reported.

Vietnam’s Permanent Deputy Prime Minister Truong Hoa Binh has required Hanoi to verify signs of physical abuse toward foreign women after accusations have gone viral over the past few days.

Hanoi’s authorities need to have strict penalties to perpetrators of sexual harassment that has been reported on local media, according to the Government’s Office.

The accusations were filed after a number of foreign women told local media and communities on social platforms, triggering indignation over the molestation that now targets to a wider range of victims.

News on media shows that from late January to late February, a number of adolescents covering face with masks and riding on motorbikes with hidden plates committed sexual molestation to four foreign women who were strolling around West Lake, one of the most famous lakes in Hanoi where many expats reside.

The abuse has somewhat threatened walking outside at night in that area of the city.

Regarding the accusations, some embassies in Hanoi have warned their citizens of the situation.

The US Embassy in Hanoi urged American citizens to be careful and consider traveling in groups when walking or jogging in that area.

On March 4, Chairman of the Hanoi People’s Committee Chu Ngoc Anh asked the local police to investigate these incidents.