Projects from many giant developers were on the list, including Novaland Group, Him Lam Land, Quoc Cuong Gia Lai, SonKim Land, SaigonRes, and Hung Loc Phat which have been in a prolonged deadlock for various reasons.

The Co Giang apartment building in District 1 was handed over land by Ho Chi Minh City People’s Committee and the local Department of Construction has granted a construction licence for the project.

The officetel and apartment building at 151 Ben Van Don Street in District 4 has already been approved for land use right taxation.

In the 30ha project in Binh Khanh commune of District 2, legal procedures are being reviewed together with the larger project of Thu Thiem New Urban Area (where this project is located). At the same time, the local authorities are looking for solutions to help achieve a breakthrough at the project.

Seven other projects are being reviewed by local authorities.

Him Lam Land’s Him Lam residential project in District 9 (Thu Duc City) and Saigonres’ two projects were also on the agenda for having legal difficulties. Le Thanh Construction-Trading Co., Ltd. and Phu Long Real Estate Corporation have two projects each.

According to Le Hoang Chau, chairman of the Ho Chi Minh City Real Estate Association, the key problems of those projects are mainly related to the slow process of calculating land use rights. Because of this, developers cannot pay tax and be approved for construction and granting red books to buyers.

Representing the developers, Chau suggested Ho Chi Minh City People’s Committee to issue guidelines to pave the way for projects which include public land. These projects have been delayed for a long time as they consist of small land plots under the management of the state and they cannot get the whole project cleared for construction.

“Local authorities should consider these projects case by case and submit their proposals to the committee to collect the public land plots and hand them over to developers,” Chau said.

Other solutions proposed included removing administrative procedures, setting out a priority list to grant red books to end-users as soon as possible.

He also suggested the committee to set up City Architect Consultant Bureau which can help solve prolonged delays.

The committee’s chairman Nguyen Thanh Phong assigned local authorities to submit a report on each project, talking with developers to ensure their projects can recommence at the soonest.

Many residents in the metropolis have pinned high hopes on the authority’s recent efforts to put an end to the noisy karaoke singing, which has been said to bring terror and nightmare to many people.

T., who resides in Hoa Thanh Ward, Tan Phu District, said he had been bothered by karaoke noise from a nearby beer parlor for quite a long time.

“They were still singing even at 11:00 pm. We have reported it to ward-level police but nothing has changed,” T. recalled.

“I had to take sleeping pills on some occasions but was still unable to sleep.”

However, they have not organized this kind of entertainment following the Lunar New Year holiday.

“Maybe they fear the COVID-19 pandemic. Furthermore, the city’s authorities have recently announced to take assertive measures to deal with the situation,” Chau elaborated.

Chau hoped that the peacefulness would last for a long time so that children can focus on their homework and the elderly can take a rest.

Officers would first issue warnings following reports from residents, and a fine would be imposed if violators repeated the wrongdoing, Nga elaborated.

Most of the violators have stopped their noisy activities after being warned, the chairwoman added.

The first is in charge of dealing with karaoke singing using large loudspeakers at local neighborhoods and parties.

The second team was tasked with inspecting karaoke parlors to make sure they do not violate regulations on noise limits and fire safety.

Measuring noise levels remains a challenge because of the lack of specialized devices, both leaders of District 10 and Go Vap District stated.

An official in Binh Thanh District added that he had to ask the bureau of natural resources and environment for assistance in measuring noise levels.

Pham Dinh An, chairman of Ward 6, Go Vap District, suggested that the city should develop a software or application that can measure noise, along with a corresponding legal corridor to make dealing with the issue an easier task.

Under government Decree No.155, karaoke noise at two decibels or higher is prohibited at any time.

Violating this regulations is punishable by a fine worth up to VND160 million ($6,880) for individuals and VND320 million ($13,770) for organizations, depending on the noise level, Cuong added. 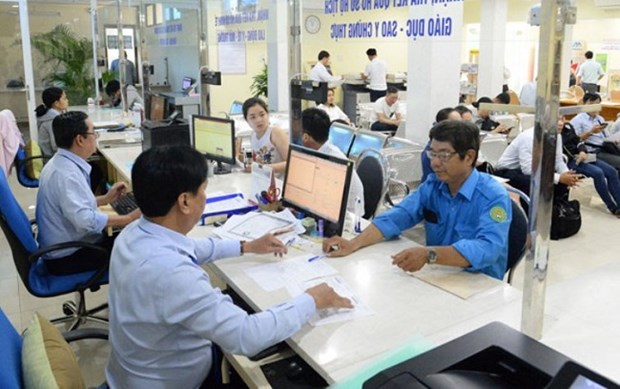 This is among the tasks for the city in conducting a plan on enhancing the application of information technology in governmental organisation s, promoting e-government and ensuring cybersecurity between 2021 and 2025.

To this end, the southern economic hub will focus on developing digital infrastructure serving governmental offices; creating open databases with easy and friendly access to increase transparency, towards e-government, a digital economy, and a digital society; and ensuring information safety and cybersecurity. 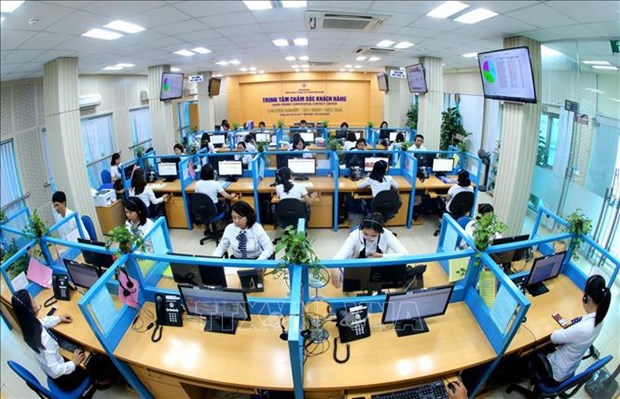 The city targets being among the top 5 performers in developing e-government and the top 3 in the ICT Development Index (IDI) and Global Cybersecurity Index (GCI).

It will provide more public utility services for people and businesses and improve interaction between them and authorities. It will also encourage innovative ideas and the use of technology in resolving public issues and increasing public satisfaction in public service delivery./.

Scheduled to begin at the upcoming Southern Liberation and National Reunification holiday (April 30), the programme will seek to create new distinctive tourism products so as to enhance the experience of tourists to the city.

The programme is the realisation of the city’s plan to develop its night-time economy and will be piloted from 2021 to 2023.

Da Nang by Night targets foreign tourists from key markets such as China, the Republic of Korea and Southeast Asia, as well as those from potential markets such as Russia, Australia and the US when the Covid-19 pandemic is brought under control and international routes are permitted to resume.

It will also aim to attract domestic tourists from places with direct flights to Da Nang, such as Hanoi, Ho Chi Minh City, Can Tho, the Central Highlands and neighbouring provinces.

The programme will include lighting shows, night-time tourism and service activities at selected places of interest, the night beach of My An, and cultural events along the Han River such as street dances, music, food and traditional arts.

There will also be night tours on the Han River and between Da Nang and Hoi An.

As part of the programme, there will be happy hours where tourists can enjoy special discounts at local shops, supermarkets, shopping centres and restaurants in order to boost demand after 10pm.

Leaving the urban life and a highly paid job behind, May chose to settle in a mountainous area, and enjoy gardening and farming.

After lunch, May (whose real name is Kieu Thi Hong Van, a resident in the Central Highlands province of Dak Lak) arranged freshly-cut flowers into a pretty vase. Then she read online news before going to the garden to communicate with her plants. She said that she officially settled down in her home town in January. Before that, she had a dream job in Ho Chi Minh City.

In HCM City, she had a stable and well-paid job. She could travel to many places in the world. However, she did not feel like herself. “At the age of 18, feeling the hardship of a farmer’s life, I chose to move to Ho Chi Minh City. When my life got better, I have my own home and vehicle, but I realized that I am not myself,” shared May.

May said that she played the good role of an active person who earned good money. But she felt unhappy as she had to keep “pushing herself up.” Hence, after 14 years with declared love for Saigon, May decided to move back to her hometown. The reason was straightforward. She found a need to be back to nature after one year of natural disasters and endless global pandemic.

During her years in Ho Chi Minh City, May had always thought about her friend’s question “Why we were born?” After long time thinking and experiencing, she realized that each of us has one’s own unique mission. And her mission is to preserve nature within her capacity. She revealed that “one of her family members used to harm forests. I was small then, couldn’t prevent that person. Now I think that person destroyed, but I will rebuild to compensate the fault.”.

“I do them step by step. I grow whatever appropriate plant wherever possible. I just start to do, first from my garden. In the rainy season, I plant in nearby forest. Planting seeds is very cheap. And I can develop them by myself,” said May.

May left a comfortable life in Ho Chi Minh City to plow and garden. Many fruits and vegetables are planted and no chemical fertilizer or pesticides are used.

May said that she spent years to prepare for her settlement back to her hometown. She bought one hectare of land and set up clean agriculture plans. On the land, she grows coffee and pepper plants for main income. The rest 5000 m2 is for different types of fruits, flowers, and vegetables.

Now she has different seasonal plants, cauliflower, broccoli, cabbage, and carrots for autumn and winter, and cucumbers, zucchinis, squash for spring and summer. In April, May, July, morning glory and other leafy vegetables are planted. In the rainy season, she picks mushroom and bamboo sprouts. She also plants colorful flowers of different kinds.

Her family has been farming for three generations. Once she turned her back to the area but now she is on nature and feels joyful. Every day, she happily works with plants just like a real farmer.

Every early morning, she cuts vegetables for chicken and walks her dog. After breakfast, she starts gardening. After lunch at home, she is back to work. Late afternoon, she waters plants, clears weed, and picks vegetables for sale or delivers to her clients in Ho Chi Minh City. She ends her day by taking care of flowers in the garden.

As a child, she felt farming was a hard job. Growing up, she is more delighted with farming rather than travelling around the world. She is deeply in love with nature and can speak with plants. “Every morning, I greet and talk with them. For me, they understand all but you must be true to yourself. Plants receive positive energy from our conversation,” said May.

May remains determined about her clean agriculture plan. “I understand that I will run a loss or just make a little in the first years. But what I obtain is my family’s health. Everyone’s health is protected, which is a big profit,” said May.

That was announced at the meeting with Deputy Chairman of the municipal People’s Committee Vo Van Hoan yesterday upon approval of the department’s plan.
In addition to job creation, the Department planned to provide vocational training for 371,000 students as well as offering 300,000 jobs to employees and reduce poverty households by 0.4 percent.
At the meeting, Mr. Hoan requested the Department to support foreign experts who are working for companies in the city by allowing them to enter Vietnam as soon as possible but still follow Covid-19 preventative measures.
Simultaneously, the Department must take heed of training to workers and enhance connection between skilled employees with employers to satisfy enterprises’ demand of high quality workers.
Additionally, the Department must pay attention to job creation for former drug addicts and apply friendly management in drug rehabilitation facilities.