Man who illegally entered An Giang infected with Covid-19

HCMC – A 23-year-old man who entered Vietnam illegally via the Mekong Delta province of An Giang has been confirmed as positive for Covid-19, said a local official today, April 23.

The local border guard forces on April 20 discovered that three people entered Vietnam illegally and then took them to a quarantine center in the province’s An Phu District, according to Le Van Phuoc, vice chairman of the provincial government and deputy head of the provincial steering committee for Covid-19 infection prevention and control.

Their Covid-19 test results showed that the 23-year-old man tested positive for the virus and the two remaining cases tested negative once.

Earlier, on April 13, two other people entered the province illegally through the Long Binh border gate and were placed in quarantine in An Phu District. They tested positive for the virus on April 15 and are under medical treatment at the An Phu Medical Center.

Following the positive Covid-19 result of the 23-year-old man, the local competent forces were urged to examine people who had close contact with the man at the quarantine center, while others linked to the man have been asked to adopt Covid-19 preventive measures.

The local health sector also cleaned and disinfected locations linked to the three people who entered the locality illegally. 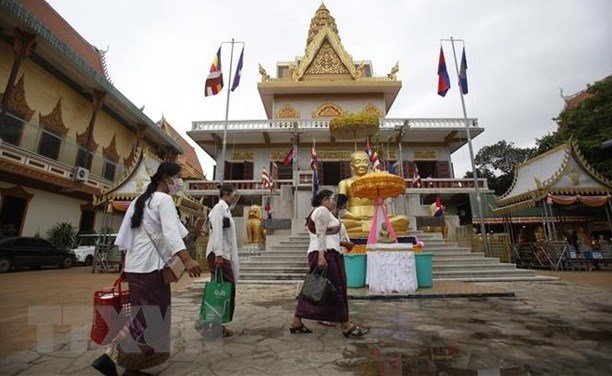 Phnom Penh (VNA) – The Cambodian Ministry of Foreign Affairs and International Cooperation on April 21 expressed its appreciation of the Vietnamese Government providing 300 ,000 USD in humanitarian aid for its fight against the COVID-19 pandemic.

The provision of the aid demonstrates the continuous development of the two countries’ traditional friendship, solidarity, and neighbourliness, the ministry said in a press release.

Vietnamese leaders believe that under the wise leadership of Prime Minister Samdech Techo Hun Sen, Cambodia will soon overcome the this difficult time posed by the pandemic and emerge stronger.

A group of about 50 plant enthusiasts in central Da Nang City met one evening in March to show off and admire the beauty of rare, unusual houseplants with complicated scientific names like Anthurium Veitchii King, Philodendron Billietiae Croat, and Alocasia Silver Dragon.

Nguyen Ngoc Quy, admin of an online forum with more than 5,500 members, said the hobby involves collecting colorful and uniquely shaped plants that adapt to each season.

Quy said collecting houseplants was a hobby started by European nobles in the 16th century that had subsequently spread across the globe. It has been making waves in Vietnam for the past five years, with people especially looking for a healthy hobby amid the Covid-19 lockdown.

Excited newcomer Thu Hang, 32, was eager to learn how to mix soil substrate. Planning to buy mutant Monstera plants, or evergreen tropical vines and shrubs native to Central America, she also enquired how to distinguish natural mutants and chemical interference. She admitted she failed to get the hobby at first and questioned “why people were so obsessed with houseplants.” But after digging deeper, she fell in love. A year on, she now owns 20 types of plants.

Dinh Han, from central Ninh Thuan Province, boasts some plants deemed the rarest, most expensive vegetable types in the world. For example, the Philodendron Spiritus Sancti with 23 leaves, is valued at about $120,000. He also has many other high-value mutants like Monstera Deliciosa White Monster that costs VND150 million (nearly $6,500) per leaf.

Regardless of price, type or rarity, many plant enthusiasts depend on their own personally perspectives when it comes to determining the value or their collections.

Nguyen Quoc Hoa My, from Da Nang, said she would not sell her Platycerium Foong Siqi at any cost.

“It looks like a fake tree and is unbelievably beautiful. So I must have it in my collection,” she said.

She had waited on a Thai contact for three years to find her Platycerium Foong Siqi tree, deemed to be largest of its kind in Vietnam. This species can be cultivated as an ornamental plant indoors or in the garden.

In 2018, when she had embarked on her hobby, the ornamental plant community was still very small and uninformed. At the time, several players had collaborated to source plants from foreign gardeners. Everyone shared the branches of rare species, along with expertise on how to care for them.

“At the time we grew by learning from each other’s experience,” the 35-year-old said, sharing she now owns 12 of the 18 original types of Platycerium Grande (also known as Dragon Nests) recorded in the world.

As one of the first houseplant players in Vietnam, architect Hoang Duy in Saigon has a collection of more than 100 species of fancy and mutated ornamental leaves. Among these are rare and unique types of Monstera. In the ornamental leaf community, the Monstera is rare due to the variegated of its unique half-green, half-white or yellow leaves, which feth high prices on the market.

Many expensive plants are publicly traded on international exchange websites. The price of each plant is usually determined according to the number of leaves, which attests to the time spent raising the plant.

Hoang Duy said under ideal conditions, Monstera Deliciosa plants need a month and a half to produce a leaf. In this process, players need to take very strict care to get a perfect leaf. It is recommended to not dampen young leaves during the watering process, to provide plants enough light, and to avoid the plants burning in the sun.

In recent months, the domestic market had experienced some turbulence after some players tried to create a “price bubble” for certain types of breeds. Due to the loss of pigmentation in mutant plants, they are considered weaker than normal equivalents. Many players are unaware mutants, though few in number are easy to propagate, Quy said.

“Not every mutant is expensive. In fact, there are many lines of ornamental plants that cost hundreds of millions too,” he maintained.

Architect Hoang Duy warned many newcomers fail to obtain the necessary information about a species before purchase. They mistakenly buy plants that look similar to ones in the picture and sold at a cheap price. Recently, due to the high demand for houseplants, cases of fraud have made it imperative for buyers to research their purchases.

Houseplant decorators are looking forward to a large-scale offline event in Saigon early next month, bringing together about 200 enthusiasts. This will be a rare opportunity to gather the “top” most species in the green ornamental world in Vietnam. 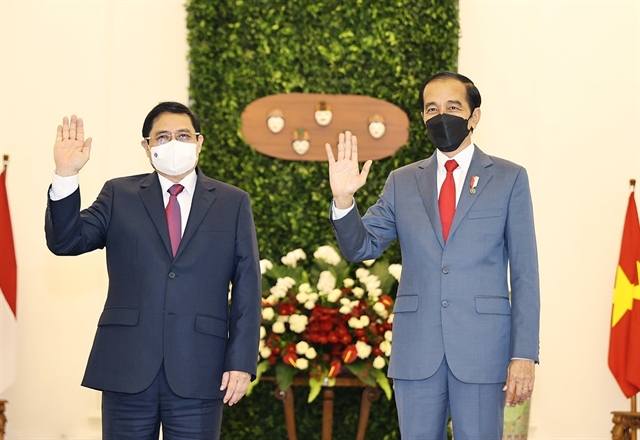 HÀ NỘI — Vietnamese Prime Minister Phạm Minh Chính on Friday paid a visit to Indonesian President Joko Widodo as he was visiting the country ahead of the highly-anticipated ASEAN Leaders’ Meeting on Saturday.

This was the first foreign trip and first in-person diplomatic meeting with another head of state for the newly-elected Vietnamese Government leader, while Chính was also the first ASEAN head of state to arrive in Indonesia for the summit.

Joko Widodo welcomed and congratulated Chính for having earned the confidence of the National Assembly of Việt Nam to elect him to lead the Government, expressed admiration for Việt Nam’s achievements in the prevention and control of the COVID-19 pandemic, along with economic recovery and development efforts.

The Indonesian leader affirmed that Indonesia attaches great importance to relations with Việt Nam and wishes to elevate the traditional friendship and strategic partnership to new heights.

PM Chính commended Indonesia’s efforts in containing the coronavirus outbreaks and expressed his confidence that the country would soon prevail against the challenges and continue socio-economic development in the realisation of the Vision of Indonesia 2045.

The Vietnamese PM shared with President Joko Widodo some highlights of the results of the 13th National Party Congress of the Communist Party of Việt Nam, the major orientations of the development plan for the 2021-25 period with a vision towards 2030-45, affirming that Việt Nam continues to pursue a foreign policy of independence, autonomy, multilateralisation and diversification, proactively integrating into the world in a comprehensive and extensive manner. Particularly, Việt Nam attaches great importance to consolidating and expanding cooperative relations with other countries in the region, including Indonesia.

Reflecting on the history of close relations between the two countries, PM Chính and President Widodo emphasised the importance and special meaning of the Việt Nam-Indonesia Strategic Partnership, the foundation of which was laid by the two countries’ respective founders, President Hồ Chí Minh and President Soekarno, and one that has been cultivated robustly by both sides’ leadership and people over the past 65 years.

The two sides noted with pleasure how the bilateral cooperation has been getting more profound, with growing political trust and increasingly effective economic, trade, and investment.

Regarding the orientation for promoting bilateral relations, the two leaders agreed to strengthen exchanges at high-level and at all levels and channels in a flexible manner, effectively implementing bilateral cooperation mechanisms and agreements, especially the Strategic Partnership Action Plan for 2019-23 and Joint Vision Statement between the Ministry of National Defence of the Socialist Republic of Việt Nam and the Ministry of Defence of the Republic of Indonesia on Defence Activities Cooperation towards 2017-22.

Việt Nam and Indonesia pledged to continue to facilitate businesses, promote trade, and soon resume flight routes at an appropriate time; strive to soon bring bilateral trade turnover to US$10 billion with trade balance and recovery and post-pandemic sustainable economic development in mind; and address all problems arising in the spirit of the Strategic Partnership and mutual benefits. 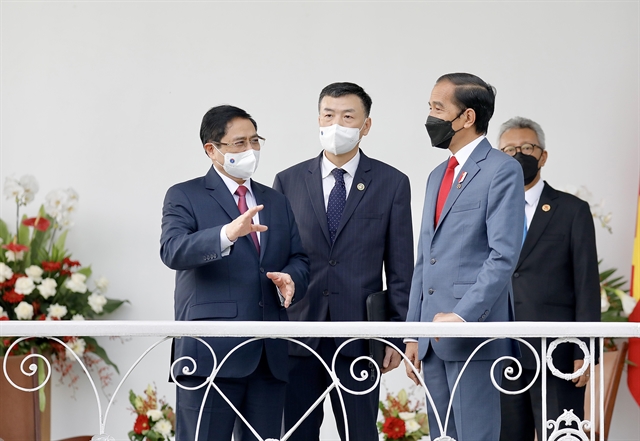 Regarding PM Chính’s request to enable easier access for Vietnamese fruit to the Indonesia market, the Indonesian President said he would direct relevant agencies to review the issue.

The two sides have also shared experience and lessons in combating the pandemic, expressed commitment on further cooperation in healthcare and vaccine production and biopharmaceuticals.

Both leaders affirmed that they attach special importance to the need to soon complete the negotiation on the boundary of the exclusive economic zone between the two countries to create a legal corridor for the two sides to strengthen cooperation and reduce cases of illegal fishing, creating a model for settling differences at sea among nations, contributing to peacekeeping, cooperation and development in the region.

Both sides affirmed that they will continue to cooperate closely and effectively at regional and international forums, especially in ASEAN, APEC and the United Nations; agreed to work together with other ASEAN member states to constantly strengthen solidarity and promote ASEAN’s centrality in regional strategic issues, including the East Sea (known internationally as the South China Sea) issue; closely coordinate in the implementation of the Declaration of the Conduct (DOC) of Parties in the South China Sea and negotiations towards an effective and working Code of Conduct (COC) in accordance with international law, including the 1982 United Nations Convention on the Law of the Sea (UNCLOS).

PM Chính and President Widodo agreed on the special importance of the ASEAN Leaders’ Meeting in Jakarta on Saturday, the first ever face-to-face meeting of ASEAN in over a year, as an opportunity for the leaders to exchange development orientations of the ASEAN Community as well as the discussions of emerging international and regional issues that have a direct impact on ASEAN, including the Myanmar crisis, with the aim of stabilising the situation, reducing casualties, resuming dialogues between relevant parties in search of peaceful measures to maintain stability, peace in the region and in the world.

PM Chính has invited Indonesian President to visit Việt Nam at an appropriate time and the latter gladly accepted the invitation. — VNS 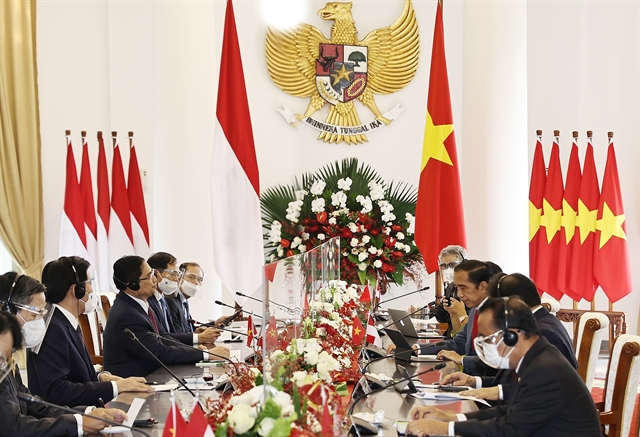 The Vietnamese delegation (left) and Indonesian delegation had talks on Friday at the Bogor Presidential Palace in Indonesia. — VNA/VNS Photo Dương Giang